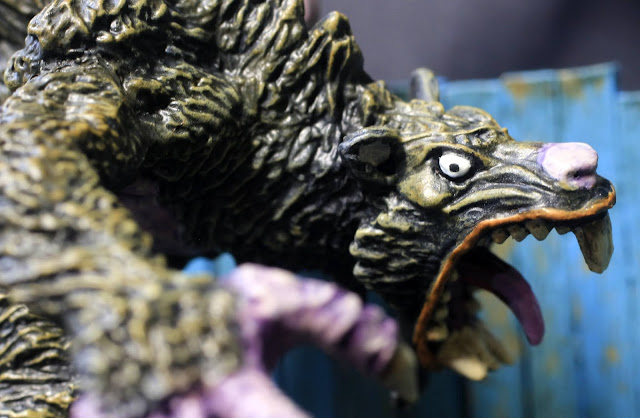 Amazon is responsible for this one by putting it in my "HEY YOU SHOULD TOTALLY BUY THIS" list. I've named him Clanger after a pet rat I had back in the early 2000s. The real Clanger was named after the best kids' TV show in the universe. Also, I started this mini back in late January and have been updating this post on and off until today, I apologise if it's a bit all over the place. 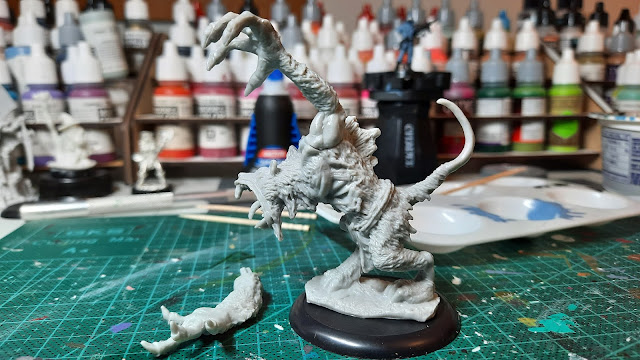 Clanger comes on an integral base so I trimmed it to fit on a 45mm base which will be beautifully decorated once I find the modelling paste (me from the future: I found it!). He's made from the older Bones plastic, so he's pretty bendy, although he survived his trip in the mail without being squashed almost flat, unlike a certain troll I could mention.

After a damn good scrubbing with warm soapy water, I glued on his right arm. With this being Reaper Bones there was a gap, so I whipped out the greenstuff to fill it and also the gap around his other shoulder. I glued him to the 45mm base and left him overnight to dry.

The next morning I gave him a coat of black primer and then had the usual internal debate about colours, namely whether to go with black, grey or brown. I decided on grey to get a move on and to stay true to Resolution 3. 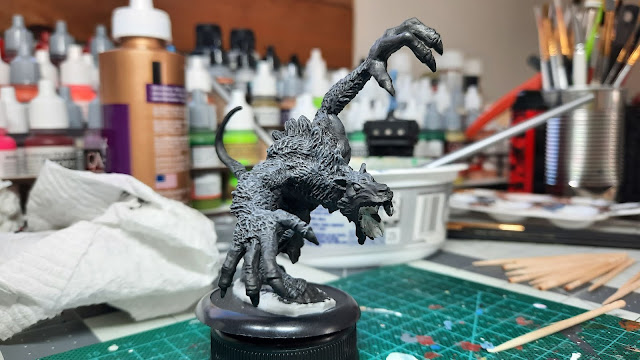 With the primer dry I gave him a coat of regular Black paint and then highlighted him with Sombre, Neutral and Stone greys. I have to admit, I wish I'd based him with a dark grey instead of black, but too late. Clanger has plenty of texture to his fur so he was easy to drybrush.

Once the Stone Grey had dried he got a wash with Soft Tone to warm up the greys a bit. One danger with using the black/grey scheme is that your mini can end up looking like a statue, so washing with a brown tone can make it look less like granite. 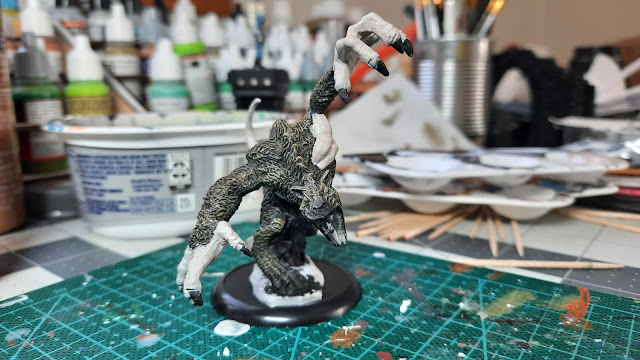 The soft tone didn't do much to add warmth, so I went with Vallejo Sepia Wash. And oh shit he's gone brown. But it's OK, I can live with it and it looks pretty good, he says in a desperate attempt to dig himself out of the hole. 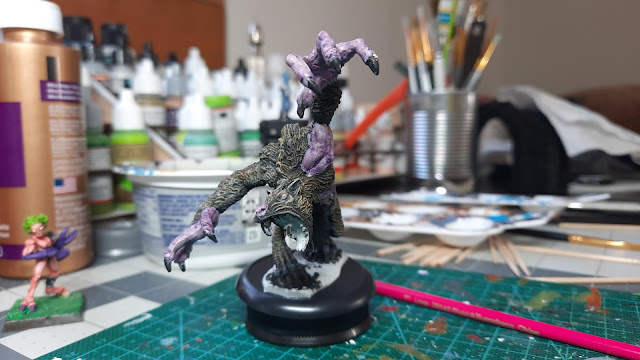 For Clanger's bare skin I went with Vallejo Pale Flesh, which is from the Malefic Flesh Set. I pretty much slapped it on with a size 2 brush in two thin coats.

I needed to give his skin some warmth and tone, so I decided on Purple Tone. Like the flesh paint, I plastered it on and then drybrushed over it with more Pale Flesh. At this point you might be wondering, "Why is his mouth still white?" and you wouldn't be the only one. I forgot to do it, so I gave it a coat of black primer and a solid basecoat of Vallejo Red. 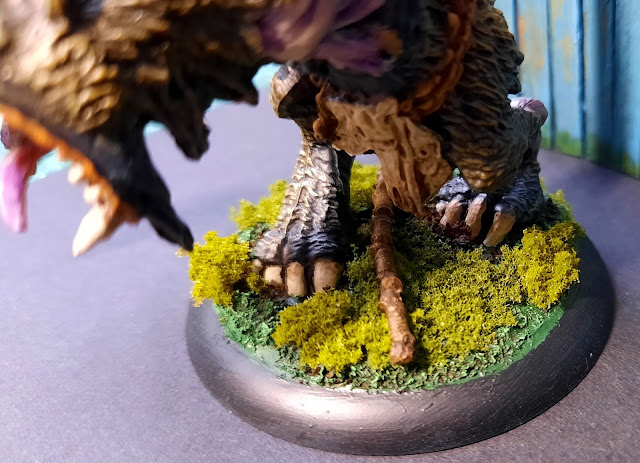 One good thing about taking so long to paint Clanger is that by the time the base was ready to be done, I'd rescued all the stuff I needed from its hiding place in the garage. The base was covered in modelling paste and painted Heavy Black Green, then plastered with PVA glue and the contents of two teabags to give it some texture. I gave it another coat of Heavy Black Green and highlights using Olive and Goblin greens, then whipped out the flock and pretty much covered the base. The log is a twig from one of the millions of trees behind our house. And yes, I painted a real twig to make it look more realistic. 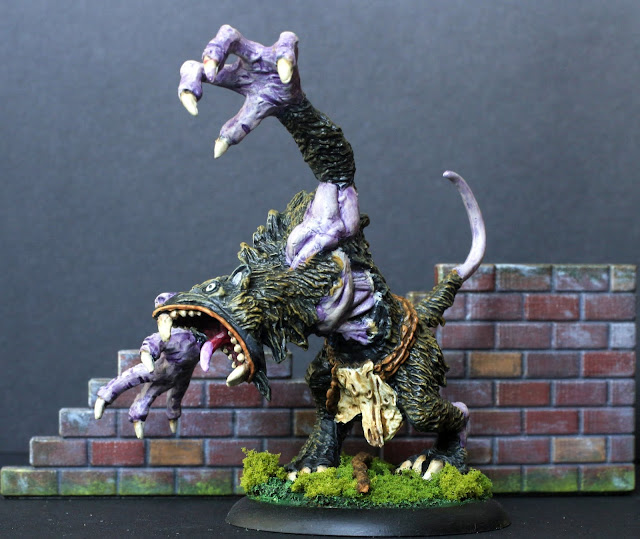 With Clanger's mouth painted red and given a once-over with more Purple Tone, I did his teeth with Ivory and Flesh Wash before highlighting them with Off-White and his tongue with Pink. His claws got a coat of Reaper Bone Shadow and a couple of layers of Aged Bone, with a final layer of Vallejo Bonewhite. 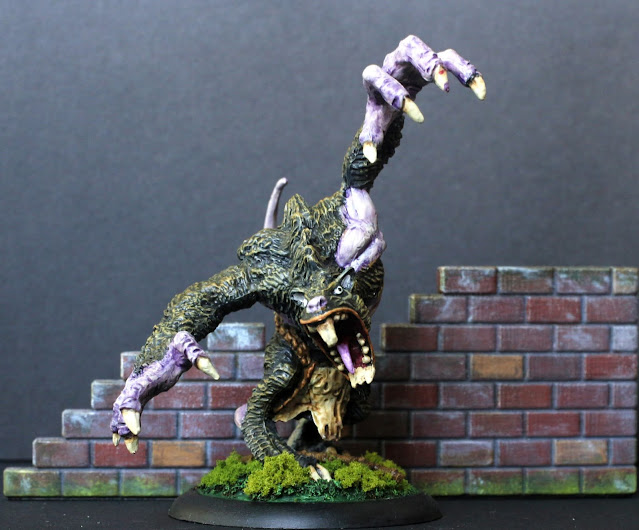 I'm bloody glad my pet never looked like this. 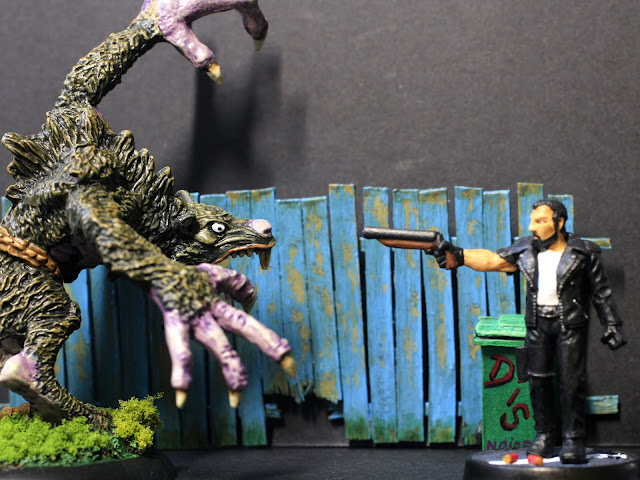