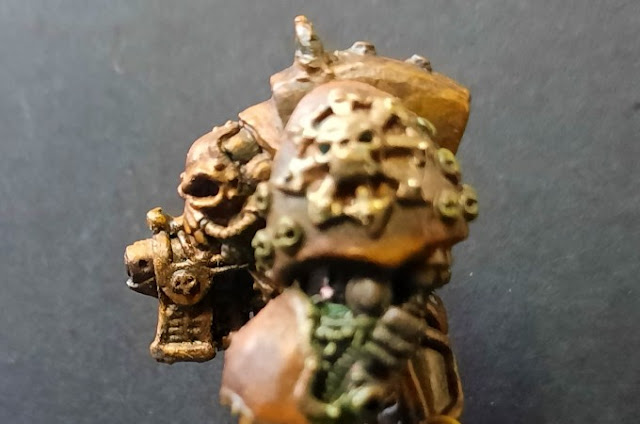 I bought a two-pack of Traitor Terminators off Ebay just after getting my regular Termies. I never owned any of them back in the day because I painted and played Emperor-loving Ultramarines, but I always thought they were great figures and enjoyed seeing them on the old 'Eavy Metal pages of White Dwarf.

It's kind of odd in these days of Legion-specific models and 3D printed accessories to see how generic these are. No Legion markings, no embossed logos to show which Chaos power they've pledged allegiance to, no Warp-induced tentacles or pipes or claws; just basic Terminators with the Chaos star in place of the Crux Terminatus, lightning bolts on their leg armour, and in this case a skull mask over the front of his helmet. The other interesting detail is the Eye of Horus on his knee and belt. From what I can remember, back in the earlier days of 40k the Eye of Horus was a generic symbol for traitor Marines rather than the emblem of the XVI Legion.

Talking of symbols, this guy — who, remember, is one of the bad guys — has a total of 12 skulls on his armour. My Dark Angels Terminator, one of the good guys, has 10. Somewhere an Imperial Marine is asking himself, "Are we the bad guys?" 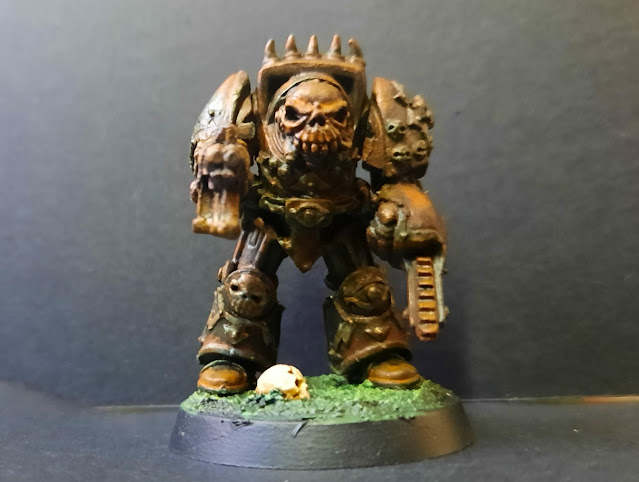 I know there's kind of a standard way of painting Death Guard these days, but I wanted to do my own thing. I've read a couple of WH40k Death Guard novels (I can absolutely recommend Lords of Silence) and one thing they emphasize is how manky and rotted the marines' armour and weapons are. Instead of the Games Workshop style of very clean dark green with purple pipes and bright brass, I wanted this guy to look like he's a nigh-indestructible zombie wearing dirty, rusting armour.

I kicked off with two thin coats of Black Green over black primer, and then mixed a wash of Burnt Umber and Black and gave him a liberal coat. Once it dried I gave it a second coat with the wash to really tone down the green and give him a dirty patina. I figured if Death Guard marines didn't clean their armour when they were the good guys, they're certainly not going to bother after joining up with Papa Nurgle.

I realised I had to highlight him so I gave him a quick 'n dirty drybrush with a little Goblin Green and then used more of the black/brown wash to tone that down. 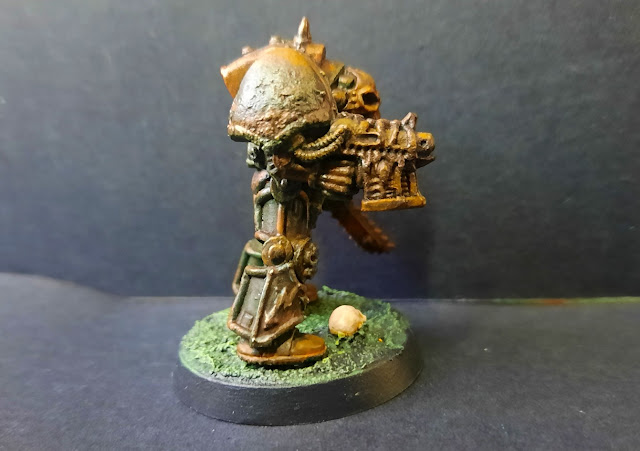 With that done I hit all the embossed bits of his armour with Bronze, which is always fun when you're desperately trying to keep the shiny metallic off the dull armour plates. I used some Verdigris to age the bronze parts, but I didn't like the effect too much so I hit it with two watered-down coats of Burnt Umber wash to cover it up and dull the shininess. After that it was a case of touching up the errant dabs of bronze with a thinned mix of Black Green and Chocolate Brown so I didn't have to try to match the washes again. 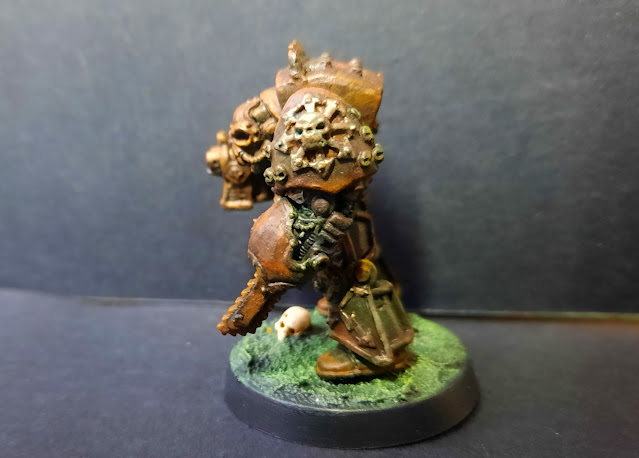 Time for the rust. Vallejo Dry Rust is an awesome effects paint, a dirty brown-black with stuff in it (I'm assuming some kind of fine sand?) which leaves a rough texture. I thinned it down and dabbed it just about everywhere, trying to keep in mind that there is such as thing as overdoing it and that sometimes less is more. I went over it with some more to build up the texture, then used thinned Rust to add the orangey bits. Despite saying that less is more, I think I overdid this part. 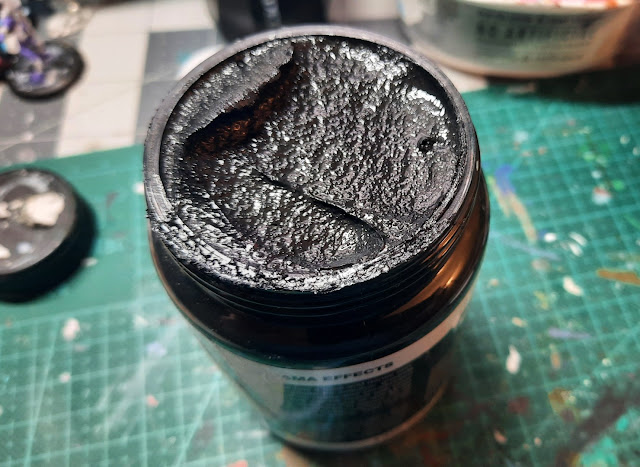 There's a tendency to put Nurgle miniatures on Nurgle-type bases, and although it would be interesting to have a Death Guard Terminator standing in a pleasant meadow, I'm not one to buck tradition. I bought some Vallejo Black Lava texture paste last month and it's great. It's a thick black paste with bits in it, and I put it on a 30mm base with a plastic spatula. It takes ages to dry, so I after embedding a skull in it I left it overnight. 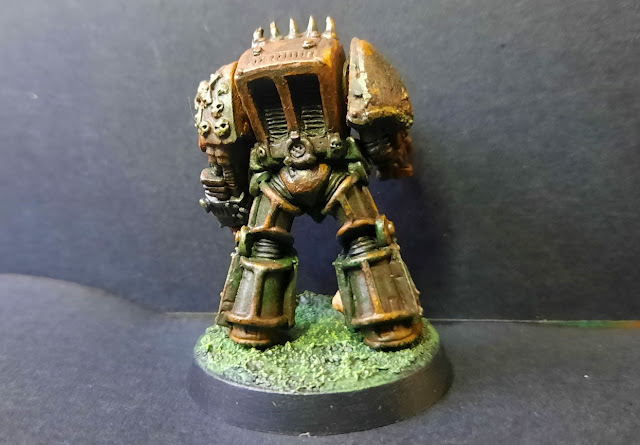 The lava was painted with cheap green craft paint and washed with Green and Purple inks, and I blended them a bit in an attempt to give it a swampy look. The skull got a couple of coats of Bonewhite before shading with Sepia Wash and some more Bonewhite for the highlights.

So, time for the usual postmortem. I'm happy with him and he was fun to paint. I think I overdid the rust a bit to the point where you can't see the green paint on some parts of him. But he certainly looks like a rusty hulking killer, so yay, and I'd forgotten how cool chainfists are. I have another Traitor Terminator to paint, and I'll get to him soon(ish).