Aglanda, Herald of Razmir, and Cultists 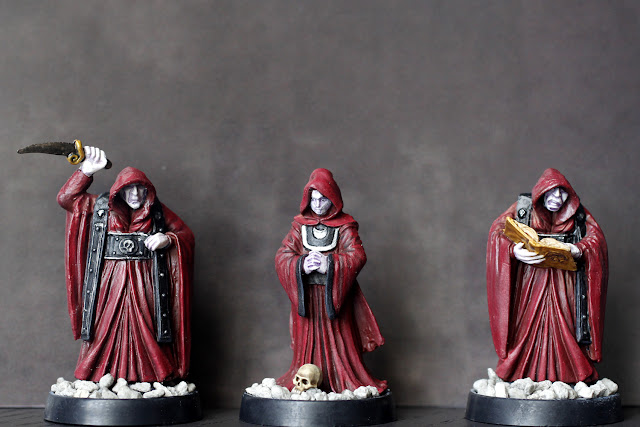 Aglanda is in the centre, flanked by a couple of cultists. I have no idea what a Razmir is, nor why it requires a Herald. 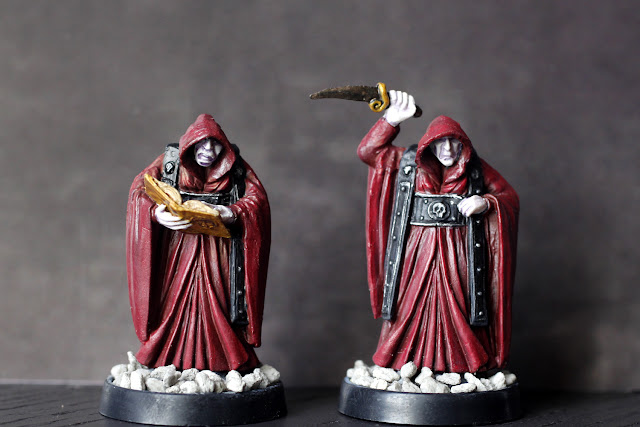 Much like Sid, I ordered these cultists as they looked fun to paint and they qualified me for free shipping. They're made from Reaper Bones plastic but amazingly didn't have any bent bits. They came with a sacrificial circle which is currently having the holiday of a lifetime in the Magical Box of Unloved Lead.

After googling around I found some instructions on how to do pale skin and went with Citadel Pallid Wych Flesh shaded with Army Painter Purple Tone and highlighted with Vallejo Off-White. My to my amazement, it worked.

I toyed with purple, blue, green and yellow(!) for their robes but ended up going with red as I have about five different shades and I wanted to give layering a go. They're primed with Citaldel Abbadon Black and basecoated with Vallejo Burnt Red. After a once-over with Vallejo Black Wash I began building up the highlights with layers of Red, followed by Flat Red. They were painted at the same time, so one would get his highlights done, then the other, and so on. It was a good way of keeping count of how many layers of each red were on them (six) to keep them looking similar. 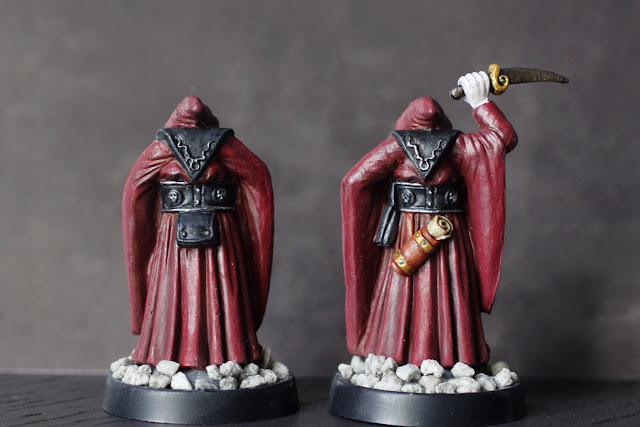 Their belts and other accoutrements are Vallejo Black trimmed with Army Painter Shining Silver. The dagger is Vallejo Tinny Tin and Brass, and the scroll and holder are Bone and Cavalry Red.

And then there's the bases. Dear God, the bases. My mind went blank and I didn't really know what to do so I decided to just use small stones. Each one is superglued in place. Seriously. It took forever. But they did turn out OK, so I can live with it. 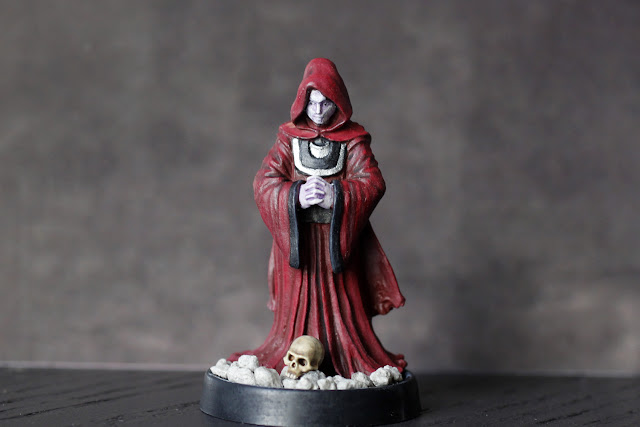 And here's Aglanda, Herald of Wossname. I spotted her on Reaper's site back when she was among the new releases. She looked really cool, so I bought her. She's a metal figure and was pretty easy to paint; it wasn't until I started doing her face that I began to have problems.

Aglanda's a classic example of a mini that really brings out the limitations to my painting skills. Have a look at the painted figure on Reaper's site. The pattern on her face looks really sinister and easily replicated, but i) her face is tiny, ii) it's contoured and iii) I'm the one doing the painting. After a couple of attempts at doing the makeup I gave up.

She was originally painted dark grey-green and yellow, basically the same as she is on Reaper's site as my inability to come up with colour schemes struck again. I ended up totally overthinking her skin tone as I wanted something pale and creepy, but I buggered it up and in frustration I chucked her into the Magical Box of Unloved Lead.

But then the cultists showed up, so after an overnight bath in Simple Green she was repainted in the same colours. Her base was done in the same pain-in-the-arse manner as the guys', and I added a skull to break up the monotony.

Looking at the photo at the top of the page again, though, I can't help but wonder if Aglanda is the important one... or the unwitting sacrifice.
Labels: army painter, basing, citadel, cultist, horror, magical box of unloved lead, reaper, vallejo