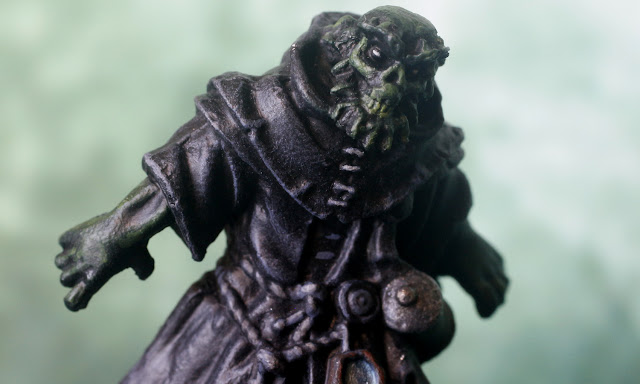 I probably need to add a label for "Minis I bought to get free shipping on Amazon".

I've seen loads of Dreadmere figures on Reaper's site, and they're all good looking sculpts. I had no idea what Dreadmere actually is, but from Reaper's forum it's this:


Dreadmere is a settlement in Reaper's world of Adon. It's set in a swampy environment on top of some ruins. A few warbands/factions/gangs have staked out territories and fight with each other to gain a foothold in Dreadmere. And the Murkillor the Wraith King is a looming threat that casts a long shadow over Dreadmere.

This wight is one of the newer Bones Black figures. Bones Black is a much harder plastic than the original white Bones material; it's akin to the plastic Games Workshop uses. As such you're a lot less likely to end up with bent arms/weapons or mushy details. The wight is a pretty crisp sculpt with plenty of details that show up well and didn't need a lot of cleaning up. 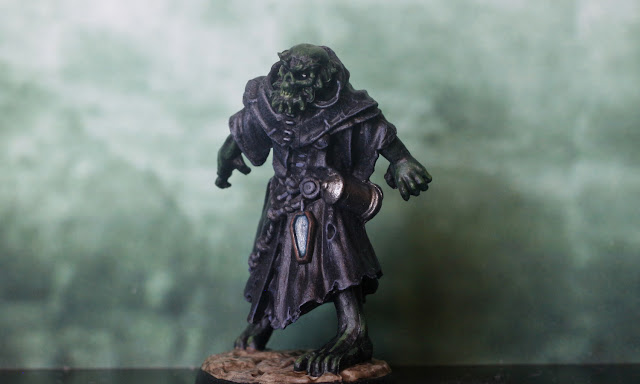 As I don't even know what a Dreadmere Wight is, I went for a basic black look for his (its?) robes. After priming with black, the whole mini was covered with a coat of Vallejo Black and washed with Army Painter Strong Tone. I highlighted it with several greys, starting with Dark and working up with Sombre, Neutral, Ash and Ghost until I got a look I liked. I used some layering but mainly drybrushing to give the figure a dusty appearance.

The ropes around his waist were picked out with Ash and Ghost greys and washed with Black Wash to bring out the texture a bit more. 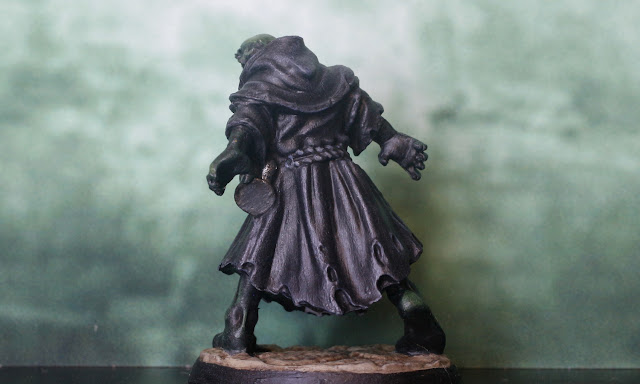 He's kind of boring from the back. 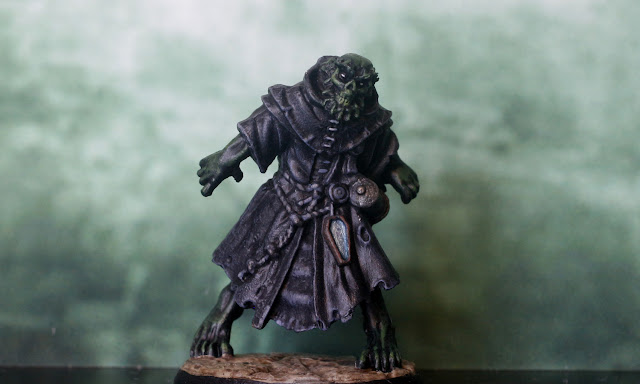 I was a bit stuck for a skin tone, and there aren't too many reference pics online. After reading that Dreadmere is swampy I went for a manky green colour using drybrushes of Black Green and highlights of Scorpy Green. His eyes are two dots of Mummy's Robe. The tankard is Oily Steel washed with Dark and Black tones and the coffin thingy hanging off his robes is Silver washed with Blue and Green tones.

He was amazingly easy to paint; I think he took about an hour in all, and for me that's fast. I finished him off by painting the integral base Stone Grey, washing it with Strong Tone and drybrushing it with more Stone Grey.
Labels: creepy, horror, reaper, vallejo