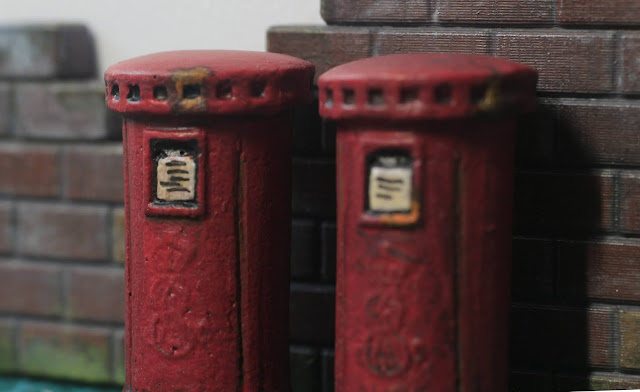 What's this? More scenery?
Pillar boxes have been around since 1852 and, along with red phoneboxes, are pretty much a British icon.  One thing I love about them is that the royal cypher on the front depends on who was on the throne when the box was made, and if I'm remembering correctly the town I lived in had boxes from the reigns of Victoria, George V, Edward VII and Elizabeth II. 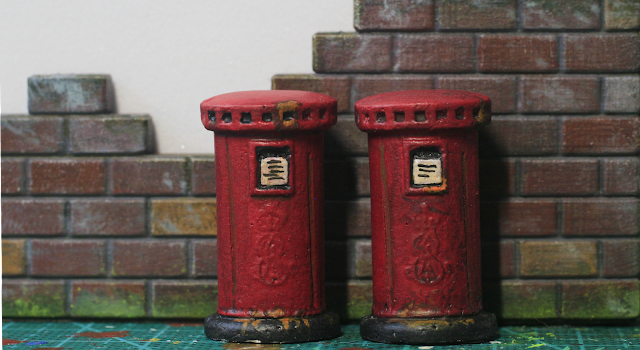 With that bit of padding history lesson over, on to the painting.
As you can probably guess they were a doddle to paint and it took me all of half an hour to get both of them done. I kicked off with black primer followed by a couple of coats of Vallejo Red. A coat of Black Wash gave them a bit of a dirtier look, and some gentle highlighting with Flat Red brought out the edges. As a final touch I gave them an old look by adding rust effects, painted the white notice on the front (which on a real box tells you the collection times) and that was that.
The cypher is supposed to be gold, but to be honest I bottled out. Besides, it's not like the gold paint doesn't wear off the older boxes... honest.
The pillar boxes are made by Black Cat Bases which I wasn't surprised to discover is a British company. One of the things that bugs me about the hobby is that there's so much great stuff sold by British and European companies that just costs a ton to send to the States, which is why Noble Knight Games, where I got them, and which sells a huge range of stuff, is so bloody useful.

They do make for a good additions to the background of photos. Here Finn takes aim at Suzi. 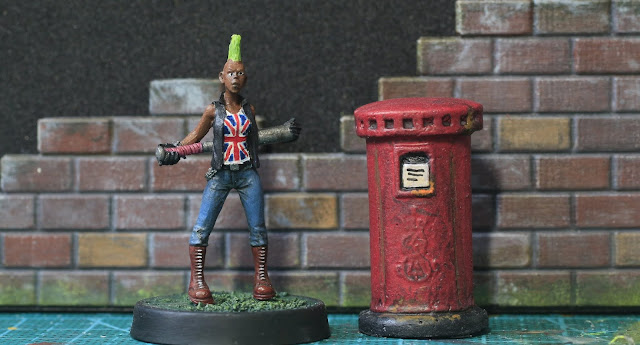 A slightly menacing Joanne hangs out by the postbox. I'm really happy with how the boxes turned out. Now all I need for these photos is something better to go behind the wall (the black background is, believe it or not, a sheet of sandpaper) and something to put under the minis that isn't a 2½-year-old cutting mat.
Right, back to my second Fembruary entry...
Labels: black cat bases, scenery, vallejo