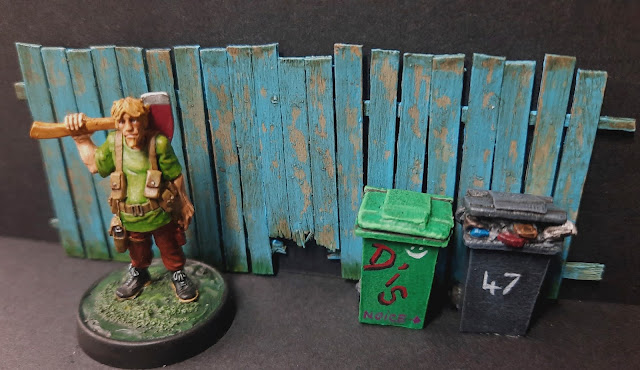 I'm on a bit of a scenery kick at the mo after finding some tutorial channels on YouTube and getting addicted to them (they also come in handy when Alicia's watching General Hospital). The stuff they make is amazing, and it's pretty straightforward — basically just foam, card, sand, glue and paint. The other day I stumbled across Vallejo's official channel and found a great video on making a decaying wooden fence so I thought I'd give it a go. 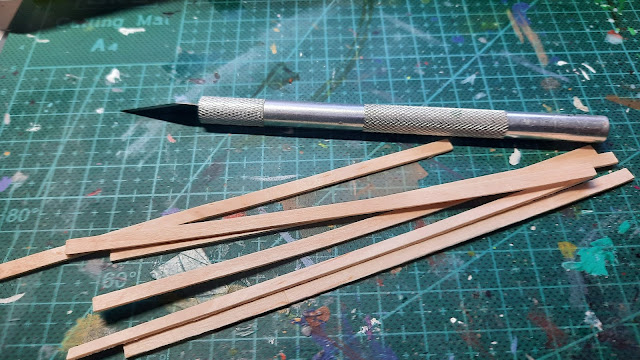 The basic ingredients are coffee stirrer sticks, a knife, sealant, chipping medium and paint. The Vallejo video uses a premade fence, but I had to make mine from the sticks, which I got on Amazon last month. Using a mini as a guide I measured the height of the planks and started building. 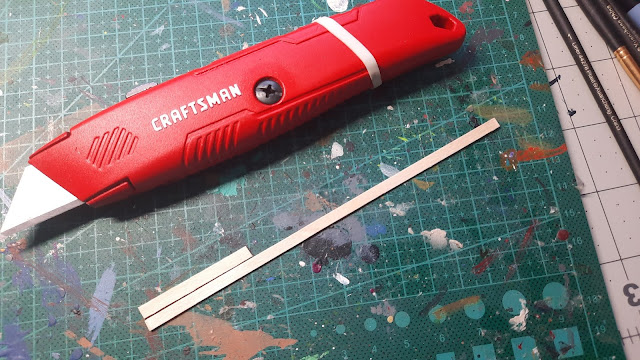 The X-Acto literally wasn't cutting it, so I dug out the big chap for this job. I used the first piece I cut as a template for all the others. 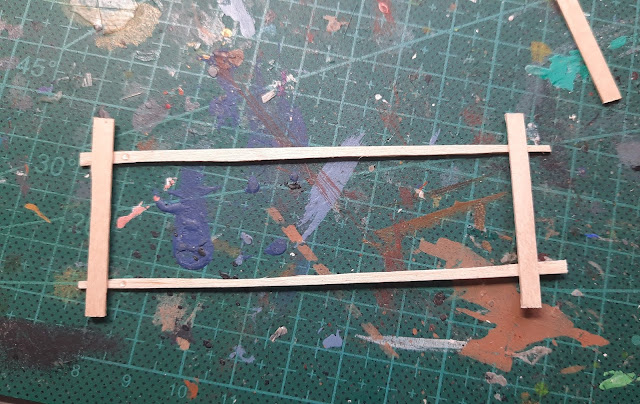 With the planks cut out I sliced another stick in half lengthways and used it as the frame. I glued on the first and last sticks and started to add more. 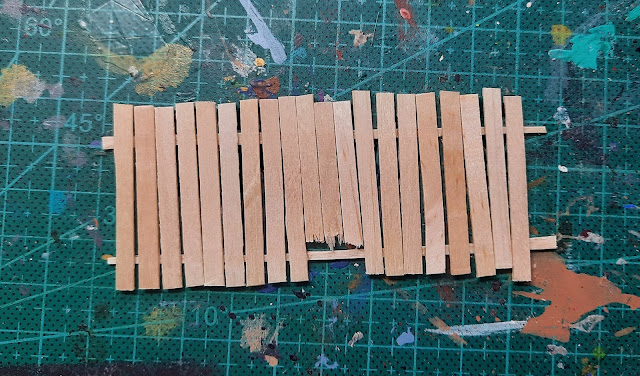 Here's the completed fence. I broke a few sticks to give it that "kicked in by local ne'er-do-wells" look. It's all just held together with drops of superglue, so I weighted it down and left it to dry: 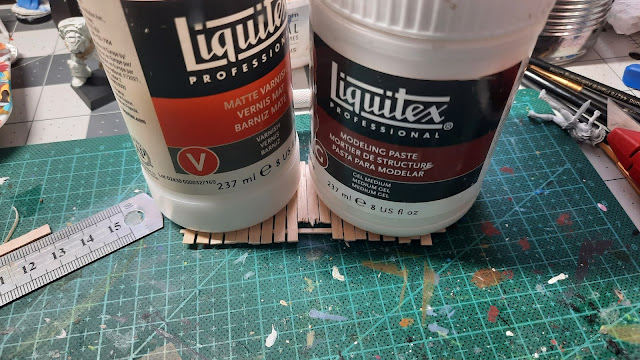 Miraculously the fence didn't end up sticking to the varnish or paste jars. Result! 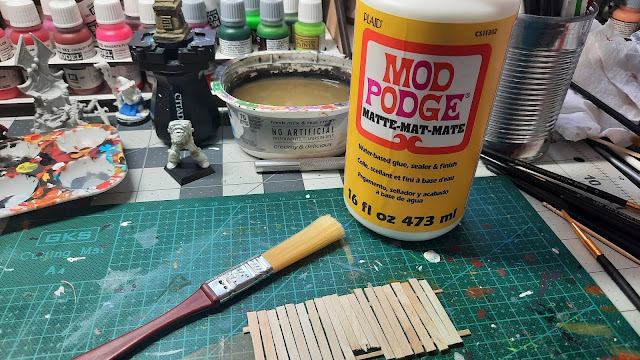 The next step was to seal the wood so it would take the paint better. I've seen Mod Podge in Michael's and Walmart, but I've never bothered with it until I watched a video explaining what it is and how to use it. It's basically PVA with additives that makes it a good sealant. I gave the fence a coat with a different brush to the one pictured, as it turned out to be absolute shite and was immediately binned. Luckily I got it in a pack from the local dollar store, so it's not the end of the world. 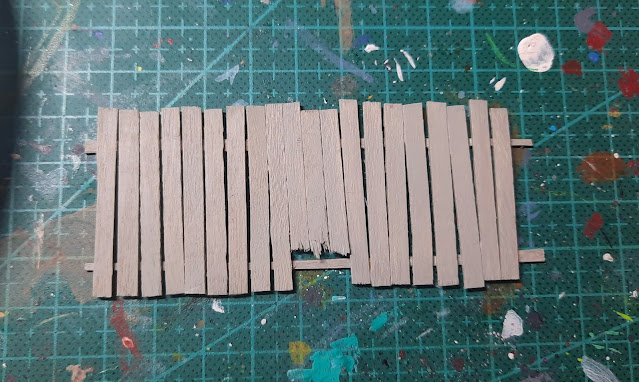 With the Mod Podge dry I gave the fence a once-over with a combination of Stone Grey, which has a greenish tint, and Ash Grey. I switched between colours while the paints were still wet to blend it better, and it ended up being too grey so I slapped on some more Stone Grey. You can't really tell from my awesome cellphone photo but there's a lot more colour variation in the real thing. 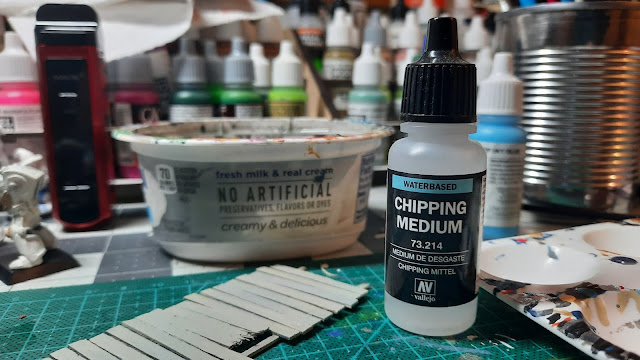 The next step calls for chipping medium. I guess adding stuff to my Amazon basket to get free shipping does make sense. I've never used it before so this bit'll be fun. The whole fence was given a coat and then put in a hermetically-sealed chamber (an upside-down tupperware container) to dry, which according to the video takes an hour. Pizza time! 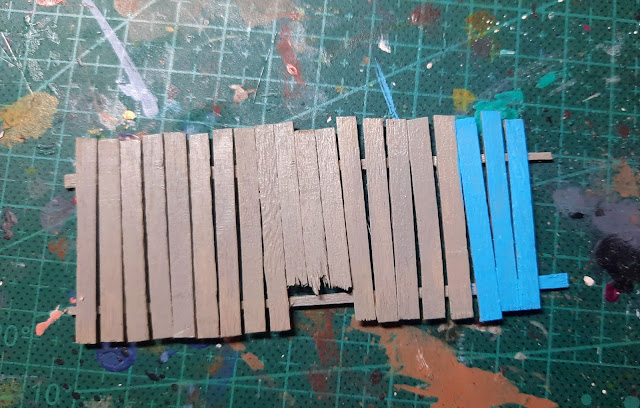 After an hour I released the fence from its plastic prison and started painting it. The example in the Vallejo video uses Deep Sky Blue, and I decided to use it too as it really is a beautiful colour. But within a few bush strokes the paint started flaking off the third plank. Shit, the chipping medium isn't dry! I gave it another 10 minutes and the same thing happened on the fourth and fifth planks, so I gave up, put the fence back under the container and left it overnight. 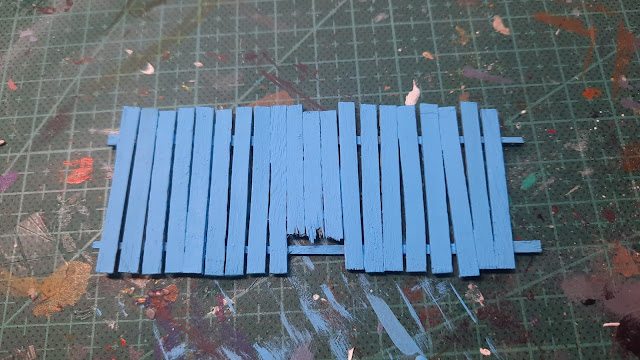 The next day and guess what? The chipping medium started to lift off again. I can't work out if this is because I thinned the Deep Sky Blue with water and that activated the medium, or if it's some other reason. From googling around the medium should dry within 30 to 60 minutes, and this stuff's had 24 hours. Nevertheless I kept painting the fence and it doesn't look too bad. Watching the video again after completing the fence I noticed that the paint starts to lift off a bit while it's being painted, so it looks like maybe I didn't screw up after all. 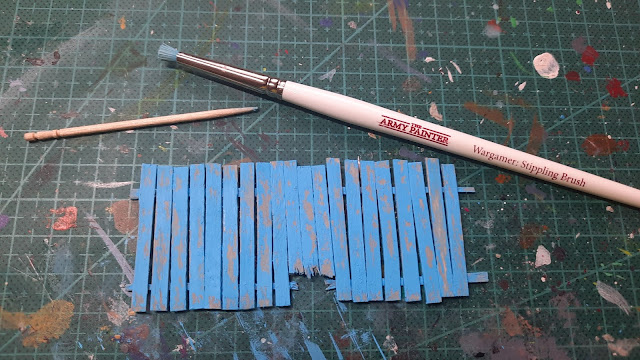 I used a stippling brush and a toothpick to remove the Deep Sky Blue. Here's a sentence I never thought I'd write: I forgot to pick up some mascara brushes — which you can also use to to do this, honest — from Walmart today.

Removing the paint was a doddle — all I had to do was dab water in the spots I wanted to damage and then use the brush or toothpick to scrape off the blue paint. The brush worked better for larger areas and the toothpick was great for doing smaller scratches. The video shows the whole wall being brushed with water and then being scraped in one go, but I did it in different parts to get the hang of the technique. I ended up with little flecks of paint on the wall but it was easy to brush them off with a softer brush. 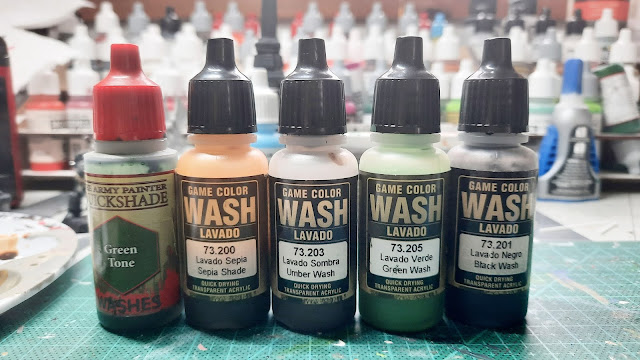 With that done it was time to crack out the washes. I mixed the Green Tone with some Sepia Wash, and some Black Wash with Umber Wash. The green/sepia mix didn't work to well so I used the black/umber to coat the entire fence. Once that had dried I dabbed more Green Tone along the bottom of the planks to represent dirt/mould. 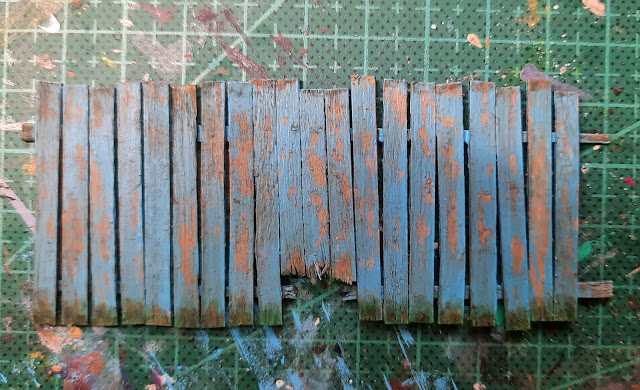 After dabbing more black/brown on the horizontal strips visible between the planks, I gave it a coat of matte varnish and it was done. The Vallejo tutorial uses a graffiti transfer to add some more visual interest, but I wasn't going to risk it as I'd have to wash white paint over the fence before adding the decal.

It's turned out really well considering I constructed the fence as I went along and it was my first attempt at using the chipping medium. It was surprisingly easy to use and I'm definitely going to use it again on something with more colour contrast such as rust effects.

In case either of you are wondering, here's my homemade photo studio: 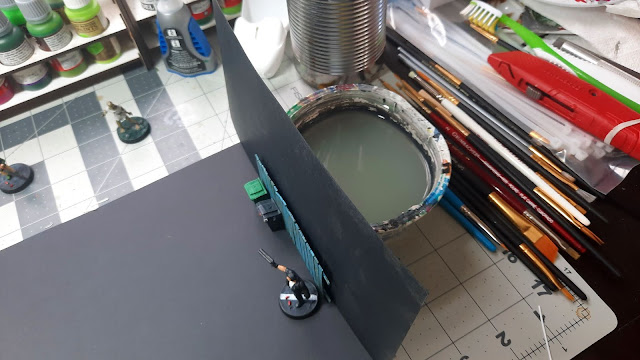 Two pieces of black card with a water dish propping one up. Talking of propping things up, the only things holding up the fence are the wheelie bins, and there's a post coming on them. I totally didn't think how to make it stand up when I built it so I guess I'll have to sort something out.