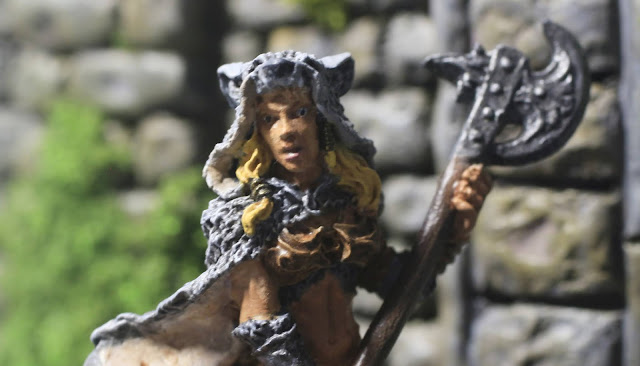 As you can see, I'm milking the ruined arch background as much as I can.

Kyrie is a freebie from Reaper. If your order's over $40 you get to choose a free mini, but unfortunately you can't just pick one from their range, you get to choose one of about 10 from a list. Reaper's had a little bit of stick on its forums for only listing older or D&D/fantasy figures, and the selection is a bit limited, although they do change the list up every now and then. But hey, it's free. Kyrie was the most interesting figure from a "I don't own any barbarians female or otherwise" point of view. So I added her to my basket for the low, low price of $0.00. And three months later it's Fembruary and the perfect time to dig her out of the storage box. 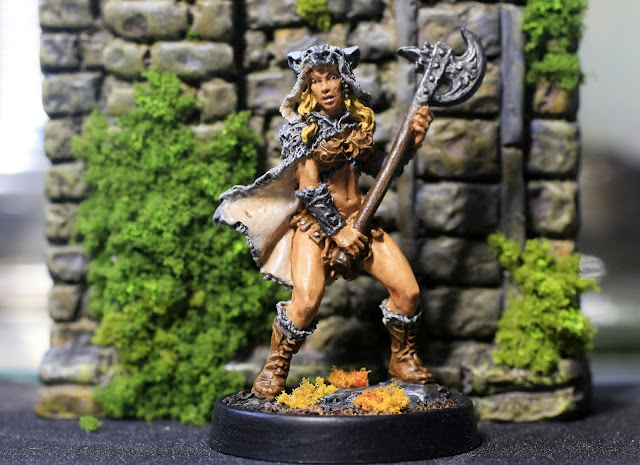 As I have no idea what the fashionable female barbarian wears I ended up going my usual route of copying the painted figure on Reaper's site. I started with her skin, using Vallejo Basic Skin and Army Painter Flesh Tone and it looked awful, way too light. So I overpainted it with Vallejo Heavy Skin which gave her a darker, more suntanned look. Once that had dried her clothing (what little of it there is) got a coat of Flat Earth as it's one of my fave browns. I shaded it with Sepia Wash, which wasn't the best choice as it didn't bring out the shadows too well, so I did it again with Burnt Umber Wash, which was a lot better. All in all, not a great start.

While painting those bits I kept wondering why the name Kyrie was familiar, so I googled it and now I have this bloody song stuck in my head:

Kyrie has a fantastically sculpted wolf pelt over her head and shoulders, and this proved a bit daunting until I just, you know, actually started painting it. 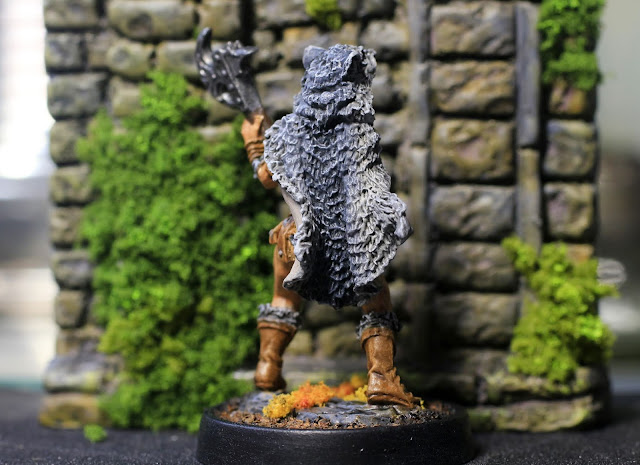 It got a once-over with Ash Grey and a wash with Black Tone, and once that dried I did a sort of line down the centre with Dark Grey and then used Neutral Grey to brush out from the dark line to the sides a bit to try to give a transition. The edges got a highlight with Ghost Grey. It actually came out better than I expected. The rest of the fur on her was simpler; just Ash Grey, Black Wash and Ghost Grey.

The inside of the pelt is Pale Flesh with some Soft Tone for shading. I added some Ivory to the Pale Flesh and used that as a highlight layer. The pelt, which I thought would be the hardest bit, was actually easier than her skin. Classic.

I decided to go with blonde hair, using Medium Flesh as a base and Sunrise Yellow for the highlights. Kyrie's axe was easy, with Chocolate Brown for the haft and Oily Steel for the head, and some Silver for her bracelet. As per usual painting her eyes sent me into a rage as I got her left pupil first time but her right one took four attempts. It's not perfect, but I'm leaving it.

She's on an integral base, so before priming and painting her I glued her to a 25mm base, daubed tacky glue into it and dumped on a load of tea leaves. The tea leaves were given a light drybrush of Light Brown to define them a bit better, and the stone (her actual base) is just Neutral Grey, Black Wash and some Ash Grey. I wanted to add something else, and given my recent success with flock I dug out my autumnal stuff and glued a few bits into place. It's very bright so I dabbed on some Umber Wash to tone it down a bit.

So that's my second Fembruary entry done, and I'm hoping to get a third one finished before the end of the month.