This 'orrible little chap was an impulse buy off Ebay back in spring 2019. I didn't exactly know what it was, I just thought it was cute in a not-very-cute way. I named him Wibble.
It turns out Wibble is from Games Workshop's Kill Team: Rogue Trader, which is an expansion of Kill Team, which is a game I know nothing about. I did guess that the "Gellerpox" bit was related to the Geller Field, the fictional bit of tech mumbo-jumbo that allows warp flight in the WH40k universe. To be precise, it doesn't allow flight, it just prevents the entire ship's crew from going insane, being possessed by daemons, going insane while being possessed by daemons, or being possessed by daemons while going insane.
Kill Team: Rogue Trader comes came with 23 Gellerpox minis, of which four are glitchlings. All are pretty cool figures, and are basically sci-fi versions of the usual Nurgle characters such as Plaguebearers and Poxwalkers. Think of glitchlings as Nurglings only IIIINNNN SPAAAAAAAAACE!
I don't know how popular Kill Team: Rogue Trader was, but it was dumped (or "squatted" to use the technical term) by GW in 2020. And there was much gnashing of teeth.
Jesus, I can't believe I wrote that much to explain the existence of a tiny cyber daemon I bought on a whim for $2.50, painted in about an hour, and then forgot about for almost two years. 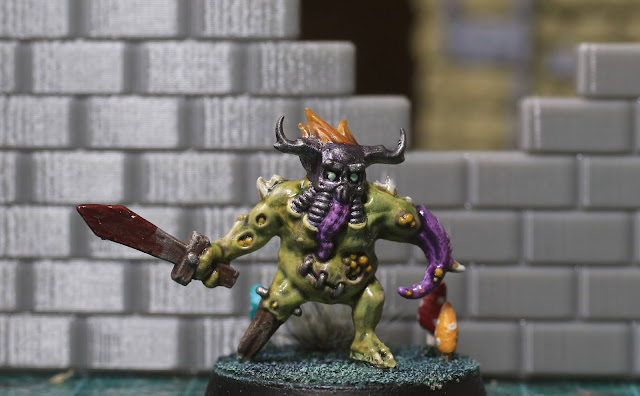 As Wibble is Nurgle, he was pretty straightforward to paint: Vallejo Dead Flesh all over, washed with Green and Purple tones. Yes, it's the zombie skin recipe. Nice 'n easy. I used Army Painter Alien Purple for his tentacle and tongue with Plate Metal and Shining Silver for his helmet/head, spine and other metallic bits, including the staples across his belly.
Grandfather Nurgle loves to bestow physical ailments on his followers, and Wibble has a rather marvelous collection of boils and abscesses. Each one was daubed with Daemonic Yellow (an apt choice) and a smidgen of Yellow Glaze. For some reason he has flames coming off his head, so I did my best to get a fire effect with Lava Orange and more Daemonic Yellow. 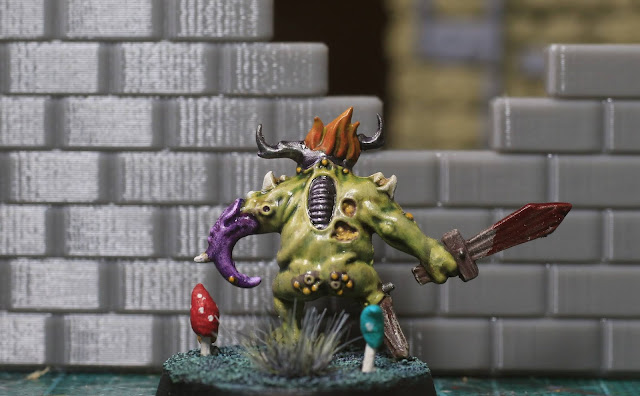 I'm not sure why he has a wooden leg and sword — they don't seem very scifi to me — but they were duly painted with Monster Brown and highlighted with Leather Brown. The sword was dabbed with Citadel's Blood for the Blood God.
And then came his base, which for some inexplicable reason I did as something more suitable for an Oldhammer figure (not that I was into, or had even heard of, Oldhammer back then). It's just sand painted Greenskin, washed with Purple Tone and highlighted with Goblin Green. I wanted to do something suitable Nurgley so I made some mushrooms out of greenstuff, painted them and stuck them to the base.
I've seen the other three glitchlings on Ebay from time to time and I am slightly tempted to get them, if only to complete the set. They're pretty decent little sculpts. Wibble is photographed against an unpainted 3D printed wall that showed up in the mail today and which was added to the "get this done" list.
Labels: 40k, army painter, basing, chaos, citadel, games workshop, small, vallejo