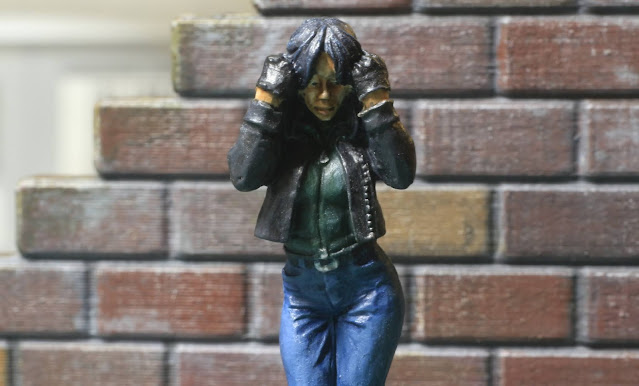 Pulse has adorned my header image since the day I launched PMPainting on its turbulent voyage of screaming and money. She was going to be my first entry in the Fembruary painting challenge, but then I had second thoughts; it would be pretty crap to kick off a challenge with a figure that wasn't specifically painted for it. So I rebased her (it only took me two years to get around to it) and here she is. 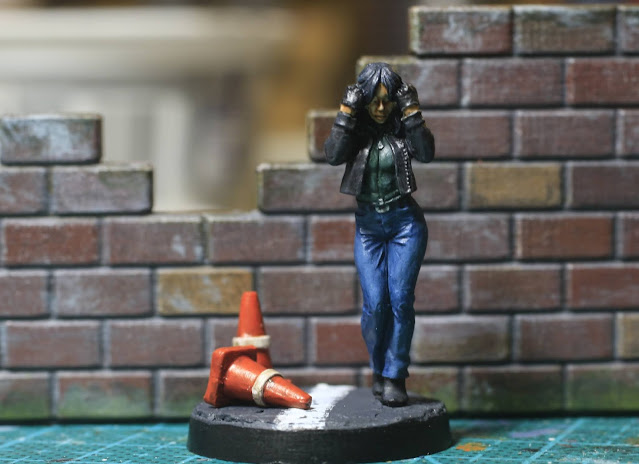 Pulse is a Hasslefree mini and has the classic "arse stuck out" pose that adorns so many of Kev White's female sculpts. She's unusual in that she isn't armed, and according to Hasslefree's site she has "powers". I'm assuming she's psychic or something along those lines. I like the way she's pulling her hoodie up and nonchalantly walking away like she's just done something cool in a Matrix-y kind of way. 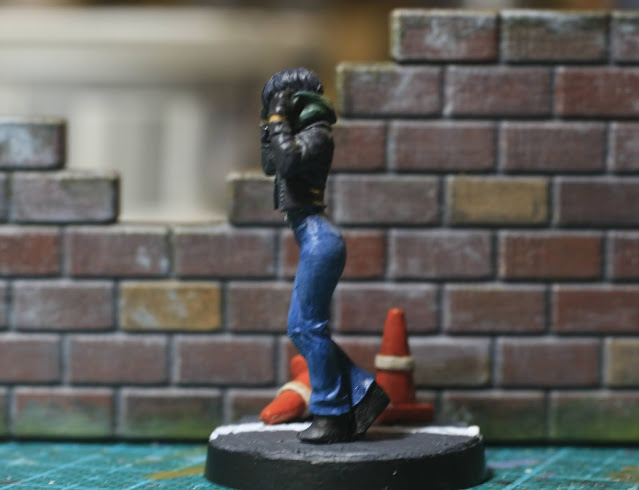 She's a small figure and was very straightforward to paint. I used my old free Reaper blue-grey for her jeans and washed them in blue tone. Her hoodie is Dark Forest Skin with some Black Wash to darken it a bit. Her jacket is Dark Grey washed with Black Wash to give it a leatherish look. A few dabs of Plate Mail on her zips and belt buckle and she was done.
The only problem bit was Pulse's face, which is tiny and partially obscured by her hair, hands and hood. I managed to get the Basic Skin and Flesh Wash onto it without too much hassle, but I barely attempted to do her eyes as they're teeny and I could only just about daub the white onto them. 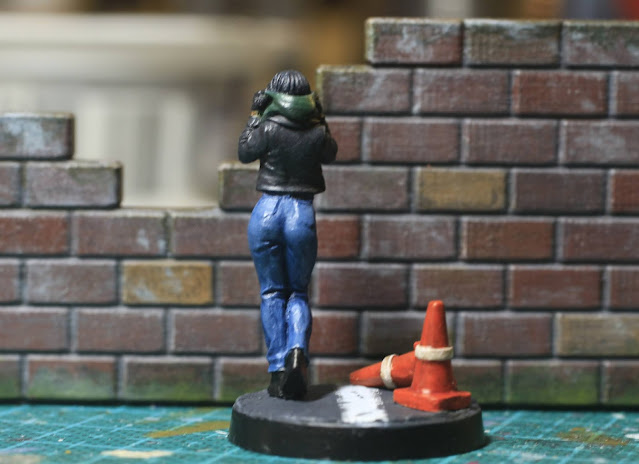 See what I mean about her arse sticking out? The base was made by filling a recessed 25mm base with tacky glue and once it had firmed up, I added a bit more glue to give it some texture and used a hairdryer to fix it in place. I really have to dig up my modelling paste from its hiding place in the garage. I painted it Dark Grey and shaded it with Black Wash. I dug out my Testors masking tape to mark out the line and painted it Off-White, and then drybrushed the whole thing with Dark Grey.
Pulse is such a small figure that she was kind of lost in the middle of the base. I remembered the Reaper traffic cones I bought in 2019 and amazingly found them within two minutes of hunting through a storage box. After priming them white I painted them with Amaranth Red and Off-White, shaded them with Soft Tone and used Light Orange for the highlights.
The background is a brick wall that arrived in the mail yesterday and which I painted up while doing Pulse's base. I took a bunch of photos of the process, so there'll be a post once I've written it up. My first actual Fembruary figure is in progress and will be posted soon.
Labels: basing, female, fembruary, hasslefree, reaper, survivors, vallejo