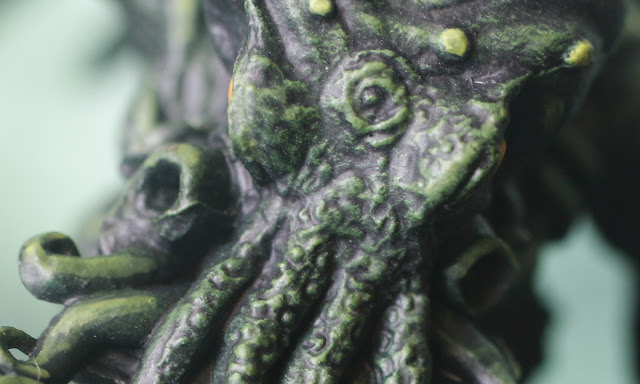 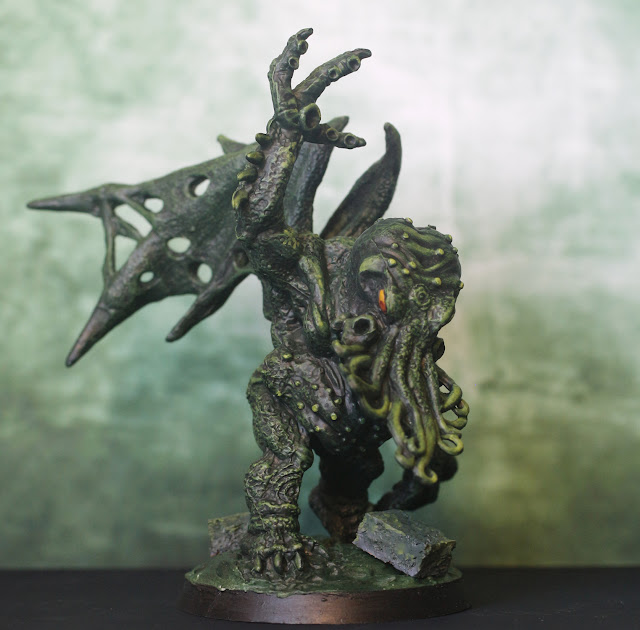 Much like the Burrowing Horror is Reaper's version of the D&D bulette, the Eldritch Demon is their version of Cthulhu, which is probably HP Lovecraft's most famous creation and which pretty much spawned an entire fictional genre known as the Cthulhu Mythos. In short:


An ongoing theme in Lovecraft's work is the complete irrelevance of mankind in the face of the cosmic horrors that apparently exist in the universe.

This mini is another one that's spent a while in the Magical Box of Unloved Lead. I think I bought it in August last year and pretty much promptly forgot about it. But with Monster Month May(hem) — as it's recently been renamed — in full swing, I had the perfect opportunity to do my third entry and second Mythos creature.

As it's a plastic Reaper Bones figure, it comes on an integral base. I superglued him to a 30mm round base and used modelling paste to build up to the level of the integral one and add some texture. One pleasant surprise was that nothing was bent out of shape, which is always a worry with Bones figures, especially when they're the older white plastic. 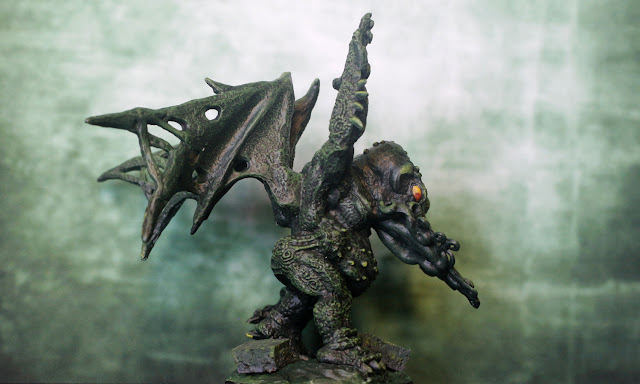 First things first: I can't be bothered to type Cthulhu so from here on it's Cutie. Or QT for short. Anyway, QT has the honour of being the first miniature I primed and basecoated with my new airbrush, and there'll be a post to come on that shortly. Safe to say it was easy, infuriating and awesome all in one.

After being primed with Vallejo Black I airbrushed a coat of Black Green over about 90% of him. I've read about zenithal priming but don't really have the confidence and skill to actually try it yet, but I tried to aim the airbrush from above to hit the parts that would be lit by the sun. So the undersides of his wings, belly, face tentacles and backs of his legs basically stayed black. 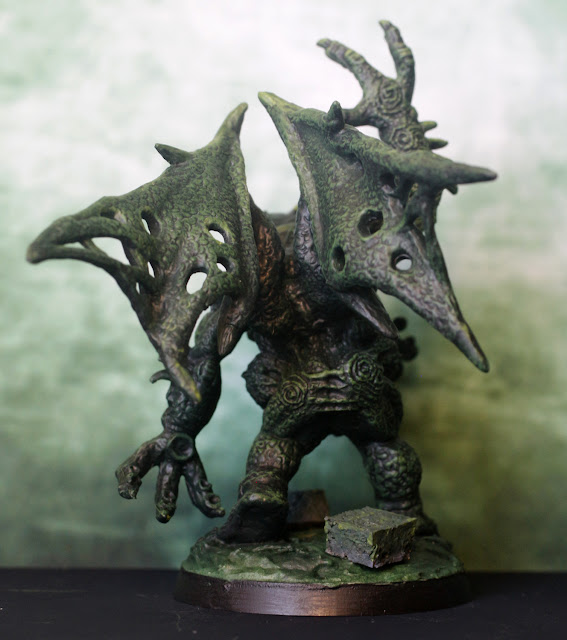 Once the Black Green had dried, which with airbrushing seems to take about four nanoseconds, I covered him with a coat of Army Painter Purple Tone to shade him and add some depth. I chose purple as it gives a stronger contrast than green and also adds a more alien look to the model.

Then it was time for drybrushing. QT is ideal for the technique as he has plenty of texture, so I started with Black Green, brushed in a downward direction. To lighten the green for the other stages of highlighting I added increasing amounts of Vallejo Yellow Green, which is the colour sulphuric acid should be.

I wanted QT to look like he was underwater and decided to use the Yellow Green as the top highlight in the hopes it would look something like bioluminescence. A quick google search showed that yellow bioluminescence exists, but then again I'm painting an aeons-old alien god, so I guess it could be any colour I want it to be. I thinned it down and dabbed/dotted it on the topmost bits of his body.

His eyes are Army Painter Daemonic Yellow with some Red Tone washed over. I don't think it worked too well so I'll probably redo them. 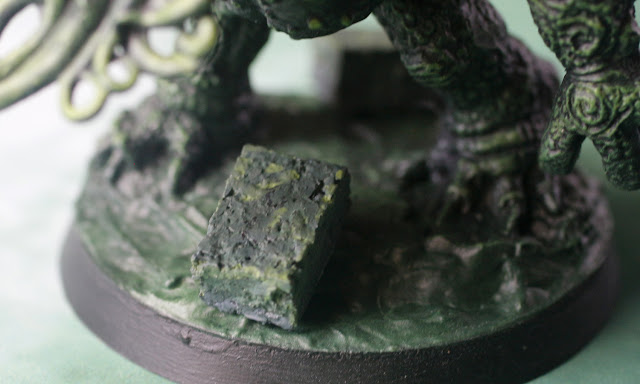 All that remained was the base. It was already coated in varying amounts of Black and Black Green from the airbrushing, so I just painted a couple of coats of Army Painter Green Tone over it and left it to dry. I cut some cork tile into blocks, painted them Vallejo Sombre Grey, washed them with black, green and yellow inks, and dabbed on a little Yellow Green. They're supposed to represent the "Cyclopean" blocks that make up Cthulhu's sunken city of R'lyeh.

The only thing I don't like about this mini is the pose: QT looks like he's about to high-five his best bud after completing a rad ollie at the skatepark.

So that's entry number three for Monster May(hem)... and what's this I see on the horizon? Could it be entry number four? I must send Keith a thank-you card, I haven't been this productive in my painting since probably 1991.

If you want to keep track of the other participants:

Jeremy from Carrion Crow’s Buffet is working on a pair of Cyclopian Aliens.

Keith at Dead Dick’s Tavern and Temporary Lodging has painted an Owlbear, Rrrraaaaaang and a giant scorpion (and some little ones, too).

Dave Stone from Wargames Terrain Workshop has painted an Oriental dragon and some Kroot.

Harry at War Across the Ages has painted a high elf dragon and a wood elf dragon.