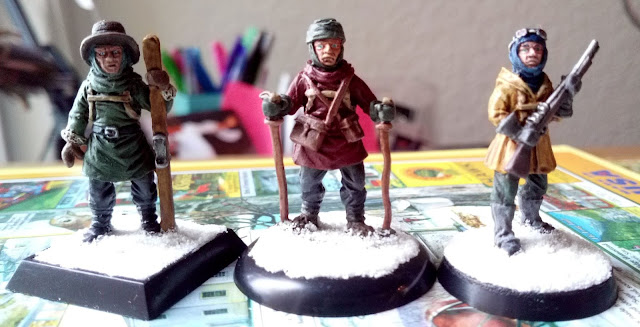 I've been interested in the early days of Antarctic exploration since I read Alfred Lancing's Endurance: Shackleton's Incredible Voyage (which I thoroughly recommend) back in 2001. Since then I've read a ton of books about those old-school explorers, so when I found a set of minis by EMP Games I ordered them immediately. That was in August 2018, and I painted them in July 2019.


I've seen lots of images of those early explorers but they're all in black and white, meaning I had no real idea of what colours their clothing should be. So off to the google, where I found a colorized image of Bertie Bowers, who was part of Scott's 1910-1913 Terra Nova expedition. He made it to the South Pole but died along with the rest of the team on the return journey. More googling brought to light that the winter gear for the entire party (some 65 men in total) was the same green.  Ah. 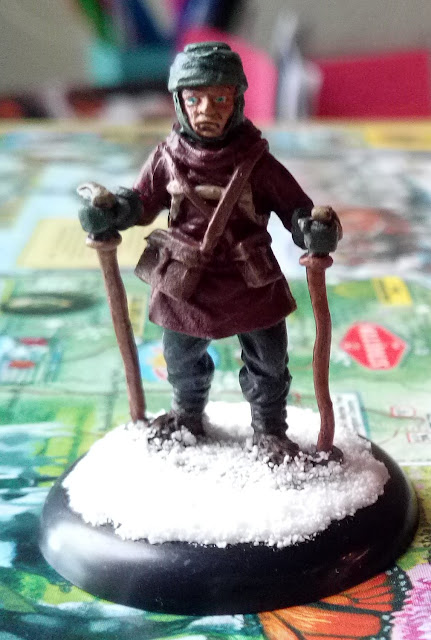 I immediately decided that painting all of them the same colour would be boring, so I threw historical accuracy out of the window. This one is painted with Vallejo Black Red, Dark Prussian Blue and Olive Grey. His ski poles are Army Painter Monster Brown and look like crap because back then, much like now, I'm hopeless at painting wood realistically. The canvas rigging on his chest is in Army Painter Skeleton Bone and his satchels are Leather Brown. The rigging is for manhauling, which is one of the many reasons Robert Falcon Scott's team died on the way back from the South Pole. I was still drybrushing highlights back then so the clothes and faces don't look as good as they would now. I'm happy that his eyes are OK. I hate doing eyes. 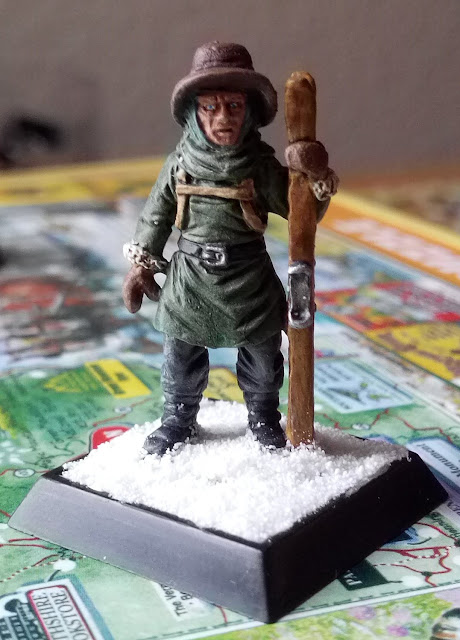 This chap is done with Vallejo Olive Grey and Dark Grey. His hat is Army Painter Monster Brown, gloves Leather Brown and skis Fur Brown. Again, his eyes are really well done. I must have been on a roll that day. 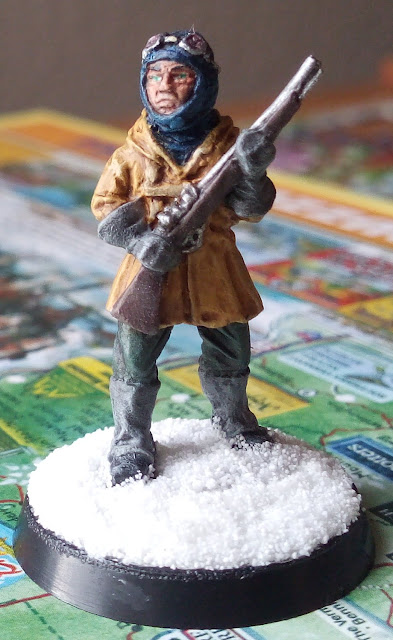 This one, which is my fave, is Vallejo Yellow Ochre, Dark Prussian Blue and Army Painter Army Green. Vallejo Dark Grey for his boots and gloves finished him off, but do me a favour and try to ignore the tiny hair sticking out of his goggles. I'm pretty sure this figure is supposed to be Shackleton.

Basing them gave me the chance to try out the snow flock that had been sitting in my drawer for about eight months. It's easy enough to use: Glue figure to base, spread Elmer's Glue (or similar) over the base, cover base in flock, leave to dry. Tap off the excess and voila! A base that's covered in snow. The last time I'd used flock was back in the mid-90s on my Ultramarines and that stuff was basically sawdust dyed lime green, so I wasn't holding my breath about how the snow would turn out. But I was pleasantly surprised at how good it looked, right up until I realised I'd put them on three different types of base. Truly I am an idiot.
Labels: army painter, basing, emp games, explorer, snow, vallejo