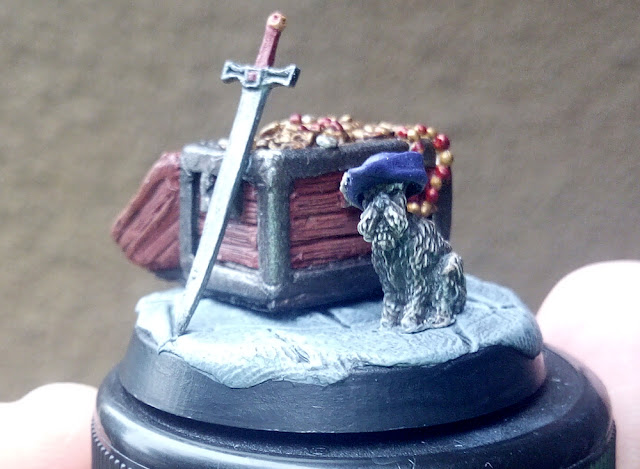 Sir Guinemar the Righteous takes his loyal pooch Worral with him on all his adventures. Worral is a good companion, a devoted friend and useful for catching rabbits. He wears a jaunty hat with a feather in it because Sir Guinemar discovered that it makes his doggo an absolute babe magnet.

After years of searching, Sir Guinemar has finally found the legendary lost treasure of Lord Nicholai Brevil, reputedly the wealthiest man in the five kingdoms, in the ruins of Aeckland Castle. After giving a quick prayer of thanks, Sir Guinemar heard a noise somewhere in the dungeon and went to check it out, leaving Worral to guard the hoard of gold, silver and gemstones.

That was 30 minutes ago.

Worral has just noticed that Sir Guinemar forgot his sword.

It's July 2019. I have a dog from RBJ Games. I have a treasure chest from Debris of War. I'm staring at these bits, which I've dug out of the Magical Box of Unloved Lead, when an idea forms (this happens, but usually only around twice a year).

"Why not a mini diorama? Some knight's found the treasure and has left his dog guarding it." The schnauzer took about 10 minutes to paint, although trying to paint a living thing in various shades of grey without it ending up looking like it's made from stone is always fun (hint: add flesh tone ink to warm things up). Purple seemed a good colour for the hat, so why not? 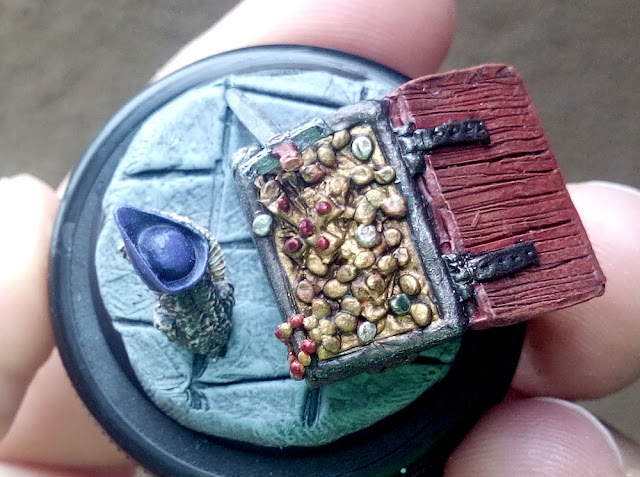 The chest took some work. Along with a (still-)crap selection of blues, my selection of browns back in the dim dark days of six months ago also wasn't too good. And browns are my hate colour; I really don't like painting them. Even white is preferable. So the chest got slapped with a couple of shades of brown and some brown ink till I thought it looked passably woodish. The edges were done in gunmetal.

In classic early-90s fashion, the treasure was painted black then slathered in gold paint. I've since learned that basecoating gold with a brown-yellow or silver with a neutral grey is the best way to go, but this is young foolish me we're talking about. A couple of washes of Army Painter Dark and Strong inks brought out the details, and I used red and green to add some jewels.

And now for the base. This was my first time using greenstuff to this extent; up until this point I'd only used it to fill little gaps. I read a good tutorial on making a flagstone base, took a deep breath and went for it. I like to think it worked, but if you could find it in your hearts to ignore the fingerprints and the fact that the stone appears to be melting, that would be awes. 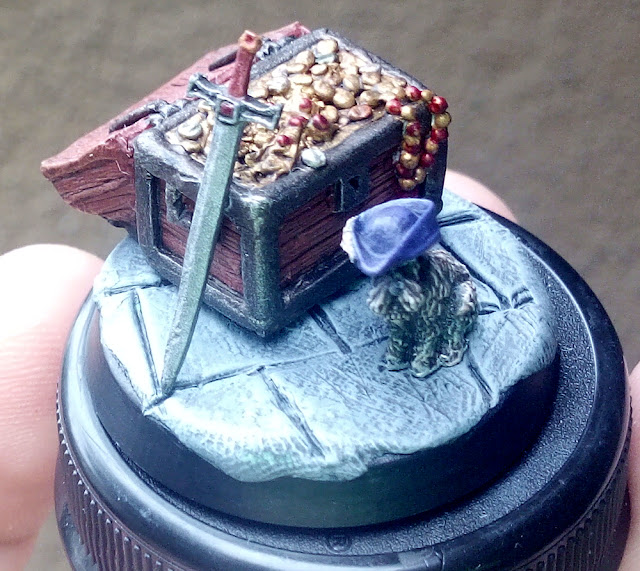 I glued the chest and dog to the base. Worral doesn't quite sit flush, but let's just ignore that and move on. There was too much dead space so I added a Reaper sword and the tale about the knight leaving his dog to guard the treasure got its ending.

By the way, the resin treasure chest is an example of one of the minor dangers of this hobby: the classic "oooo that looks cool/good/useful/I NEED IT NOW" feeling that you get when looking over a manufacturer's site. I bought the treasure chests because I thought they'd come in handy. One did, but it took 11 months. That said, there is nothing wrong with Debris of Wars' products, which are excellent quality and reasonably priced.  It's just a shame they're in the UK and the postage is horrendous.

The pooch was a freebie from RBJ. I'd ordered a couple of figures and he (it's a one-man-band operation) chucked in the doggo. It's that kind of customer service that makes life better.
Labels: army painter, chest, d&d, debris of war, dog, greenstuff, rbj games, reaper, sword