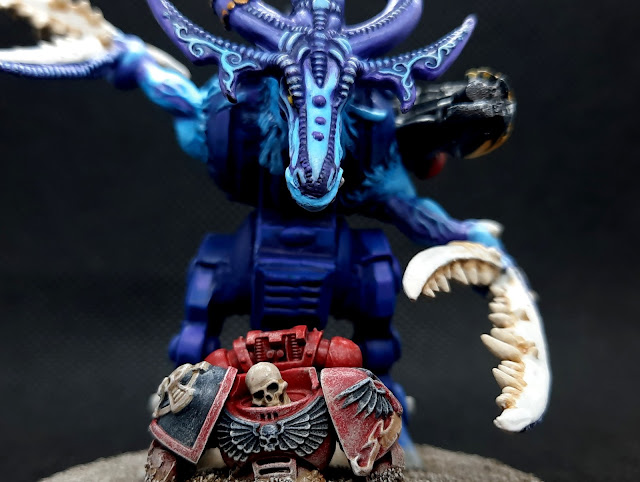 Here it is, my main Monster May(hem) project I've alluded to over the past month. Hopefully I didn't big it up too much. Also, it occurred to me while writing this post that the conversion and painting took longer to do than writing my 15,000-word dissertation on the invasion of Grenada.
This took so long partly because I found it daunting, partly thanks to me overthinking things, and partly because of the other 10 minis I painted for this year's Monster May(hem).

So it's been built over the past month in dribs and drabs, usually while waiting for another mini's base to dry or in the early hours of the morning, which is why I missed the Monster May(hem) deadline of May 31. Still, it's built and I'm well happy with it. Bear in mind I'm writing this post almost a month after I started on this project, so it's not like the following all happened over the course of a few days.

I bought the dreadnought just after we moved to Vermont in September 2020, and originally I was going to paint it in the classic Rogue Trader-era 'Eavy Metal style: 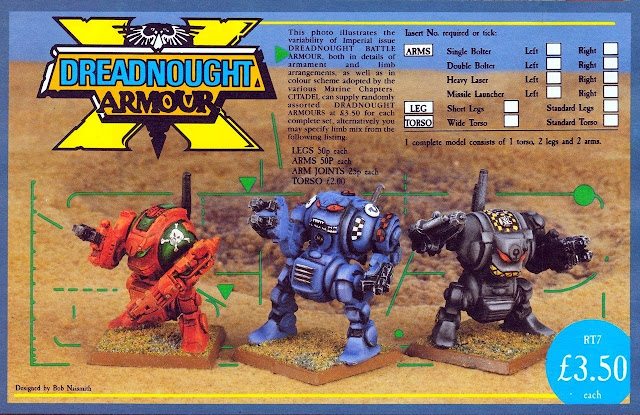 Kids, welcome to 1988 box art. Anyway, out of nowhere the idea of converting it to a possessed dreadnought popped into my mind, so I jumped back on eBay to see what I could find. As I already owned a first-edition Keeper of Secrets I looked for something different, and to my amazement I found a metal second-edition KoS for the unbelievable price of $10, including shipping. Result!

And then the idea, and the models, were put on the back burner for almost two years until Monster May(hem) 2022. So let's get on with it. 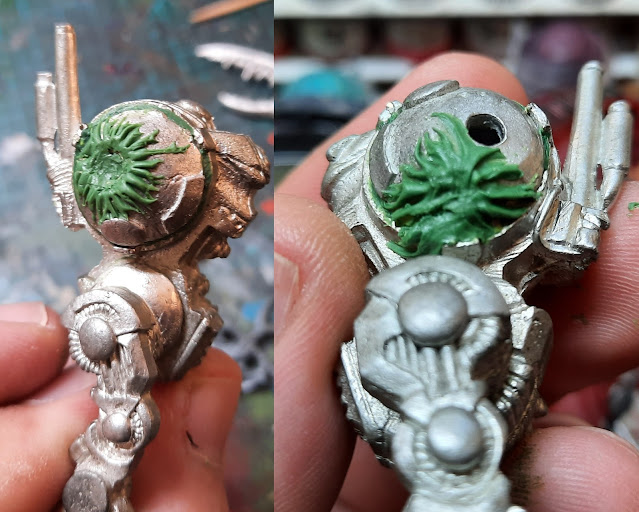 After cleaning up and assembling the dreadnought, I set about mixing (as per usual, too much) greenstuff so I could add what hopefully looks like muscles, or at least biological matter, to its carapace. This is where the extra arms will go once I've decided which ones to use. The greenstuff was pretty easy to apply for a change, and I used a wet toothpick to create the fleshy bits. 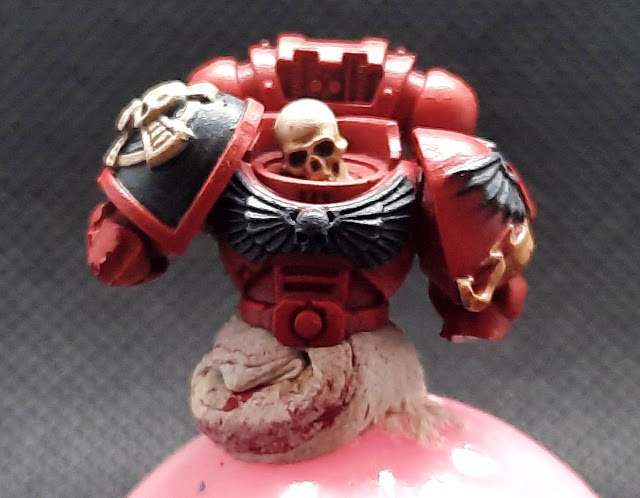 One detail I wanted to add to the base is a dead Marine, and so while the greenstuff dried I painted up this expired Blood Angel, inspired by Dave's base for his model of Fulgrim. 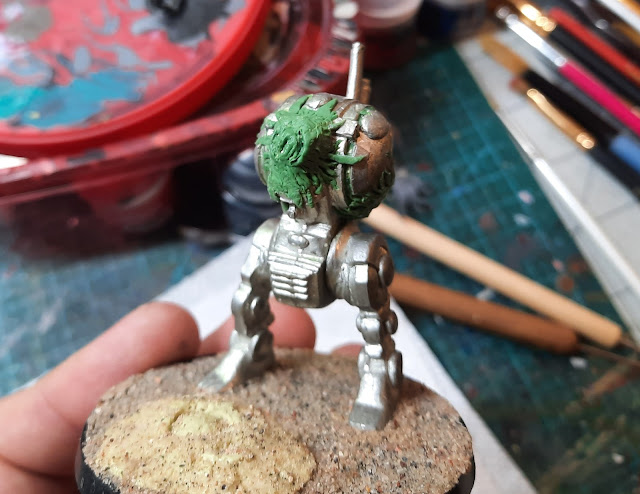 Once that was done I stuck the dread to a 60mm base and glued on sand and a large blob of Milliput to make a raised area for the Blood Angel. You can just about see where I pressed it into the putty to make an impression I could stick it into later. 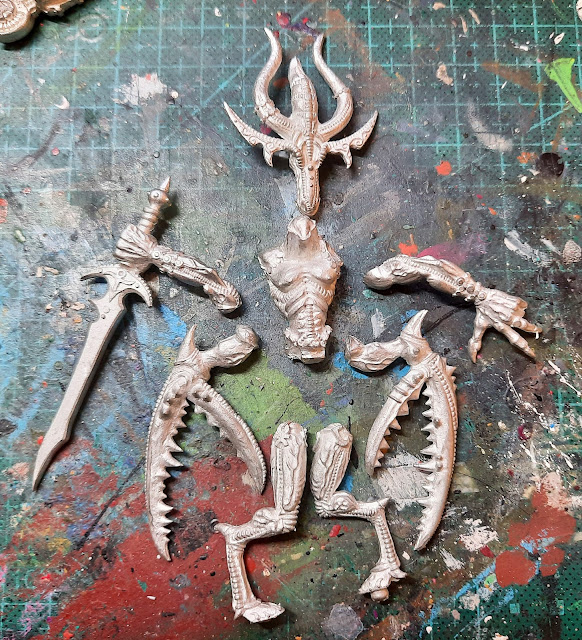 Here's the Keeper of Secrets in all its unassembled glory. The sword is actually taller than the dreadnought. 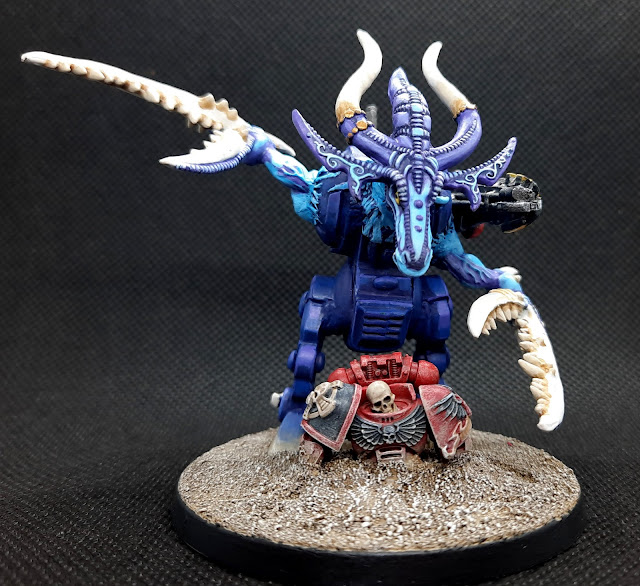 Painting time... I kicked off with the daemon bits first as I thought they'd take longer, and Christ was I right. After painting my other Keeper of Secrets a sort of pastel orange, the Steed of Slaanesh electric blue and the Dragon Ogre pink, I hunted around for another colour and went with Oxford Blue, which is a deep blue-purple shade I've barely used since buying it a couple of years ago. It covers really well, and the head and claws were basecoated in no time. Yay.
Of course this is me, so I had no real plan as to where to go with the colours. Working on the head first, I added some Deep Sky Blue to the Oxford Blue and layered it on, then did it again, switched to pure Deep Sky Blue and then Sky Blue. I really liked the way it was looking and despite not being the usual pastel or vivid Slaanesh colours it worked well. I finished off the head by painting the horns Bone Shadow, Bonewhite and Ivory, with some Seraphim Sepia to shade it, and the eyes Yriel Yellow with Black pupils. 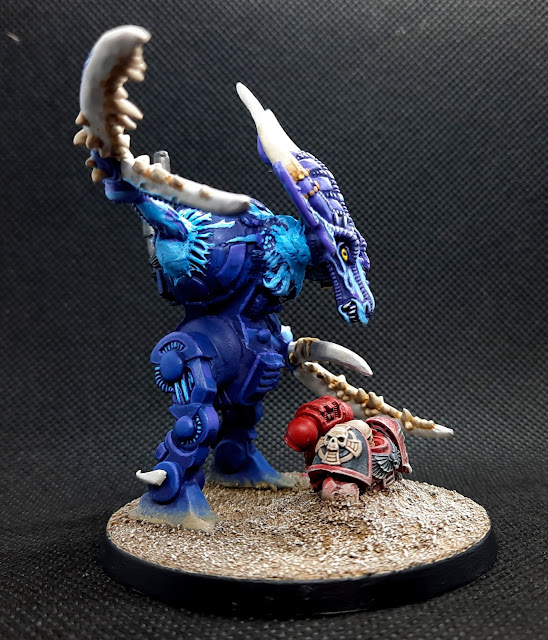 Onto the arms. I chose the two clawed arms over the human ones just because they're way cooler. Anything not a claw was painted the same way as the head, and getting all those tiny ribbed bits almost killed my eyesight and will to live. Thankfully the muscles didn't take long and I was able to move on to the claws.
Just to add some lighter shades, the claws and little spine things were painted Silver Grey, which took four coats(!) to cover the black primer. The teeth were shaded with more Seraphim Sepia and then layered with Bonewhite and Ivory, and the lighter parts of the claws were highlighted with thinned White. And with that, the daemonic parts were painted and put to one side, and as easy as I made it sound they were a bit of a pain to do, with me having to touch up endless areas where I got white on the blue, or bone on the white. But they're done, so let's move on to the actual dreadnought. 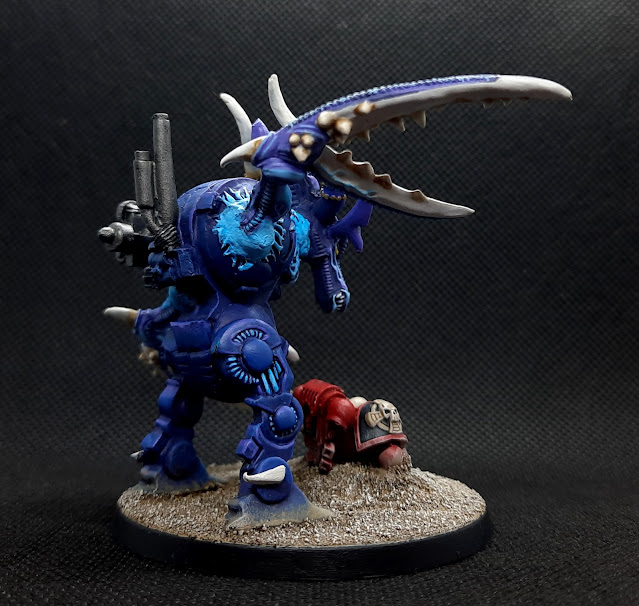 At this point it hit me that I had no idea how to go about painting the dread. Do I paint it as a Marine chapter? In Slaanesh colours? I thought about committing the ultimate blasphemy by doing it as an Ultramarine, but then decided to stick to a similar scheme as the daemon, as if the machine had taken on the colours of its possessor.
After a couple of coats of Oxford Blue, I cracked out the Ultramarine Blue (Game Colour, which has more of a purple tone than the bright blue Model Colour paint) and layered it on, then added some Deep Sky Blue to do the uppermost areas. I added some Sky Blue to the legs just to match the KoS. The exhaust pipes were given a coat of Iron Warriors and then the entire thing was plastered with matte varnish. I painted the greenstuff areas with lots of Deep Sky Blue and layered on Sky Blue and a touch of White to make it look like the daemon's skin shade, and it kind of worked. One thing I noticed was how crappy the greenstuff on the face looked compared to the arms, but too late now!
And finally, the weapon. I thought it was some kind of laser weapon but it's actually a rocket launcher, which frankly it doesn't resemble in the slightest but this was the 80s. After painting it Iron Warriors with Silver highlights, I pondered how to paint the tip. Checkered patterns were all the rage back in Rogue Trader days, so I used Averland Sunset and Moon Dust to get the yellow but then remembered I can't freehand straight lines to save my life. Instead I went with a kind of wavy black flame look to tie it in with the classic boob tattoos that almost every daemonette and Keeper of Secrets used to boast. I added Red to a couple of other areas, and that was it... it's all painted! 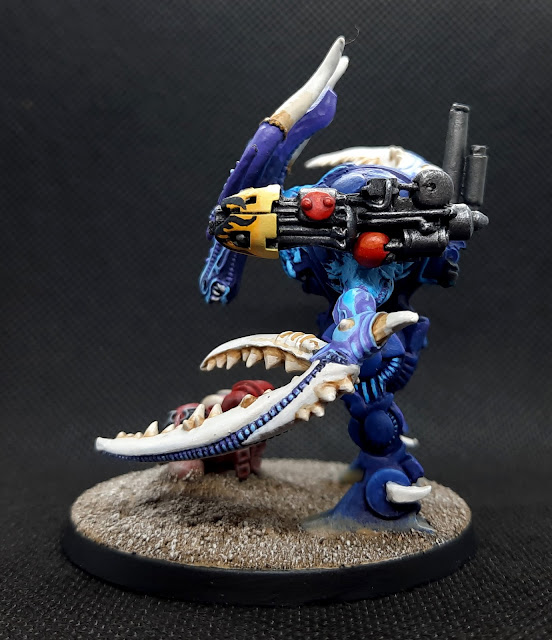 Well, yes... and no. The base didn't look too good in black with purple-blue splats, so it got a coat of Tallarn Sand, a wash with Agrax Earthshade and highlights with Khaki, Karak Stone, and Ivory, and then a thorough going over with matte varnish.
Now I had to attach the arms and head, and I can see a few of my reader(s) shaking their heads that I'd do this in separate parts rather than stick it all together before painting it. What can I say? It's me. I thought it would be difficult to get at the arms to paint them, and now it's together I can see that I was wrong, but "making life difficult for myself" has been a theme of my 50 years on this planet and I'm too old to change now.
The right claw was stuck on first, propped up with a paint pot and left for about an hour. Then the left arm was introduced to the superglue, held in place with a lighter and left for another hour (see why this took so long?). With the claws done I glued the head on, and then had a panic attack when I thought the rocket launcher wouldn't be able to fit because of the horns. Thankfully it did, and once my heart rate calmed down I began adding more greenstuff to blend the arms and head into the dreadnought body. It didn't take long and the whole model was put on the windowsill to dry. 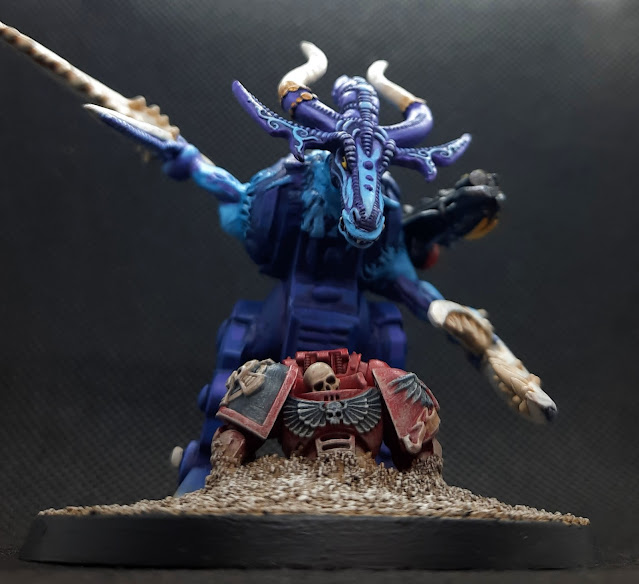 Several hours later the greenstuff had dried enough that I could paint it to blend the arms and head into their respective areas. The rocket launcher was glued in place, and it's done! Oh shit I forgot the ex-Blood Angel WILL THIS NEVER END?
He was put into his little hole and that's when I discovered that the paint and sand had filled it a bit, meaning he didn't go in far enough. It's at times like this I wish I had an easier hobby, such as cooking meth in the basement . Using a pointed sculpting tool I dug out some of the dry Milliput and glued him in, then used more greenstuff to fill the gaps around his waist and arms. Once dry (another hour or so, and at least I got the laundry done) I added some PVA and sand (another 30 minute wait) and then painted it to match the rest of the base. As I don't own any weathering powders I just drybrushed some Karak Stone onto the deceased space vampire to make his armour look worn and dusty, completely forgot to stick on a couple of desert tufts, and painted the base rim black.
And it's done! And it looks great given it's the first time I've tried converting one large metal model with bits from another large metal model. I did overthink it in places, doing the daemon parts separate from the dread probably wasn't the best idea, and if I'd put my foot down and not fannied about I probably could have got it finished last week. And yes, I know Slaanesh greater daemons have four arms... whatever. But it looks awesome, I'm well happy with it and I learned a lot over the past four weeks.
As always, huge thanks to Keith for hosting this challenge and Roll on Monster May(hem) 2023!
Labels: 40k, basing, chaos, citadel, emperor's children, monster, monster mayhem, painting challenge, slaanesh