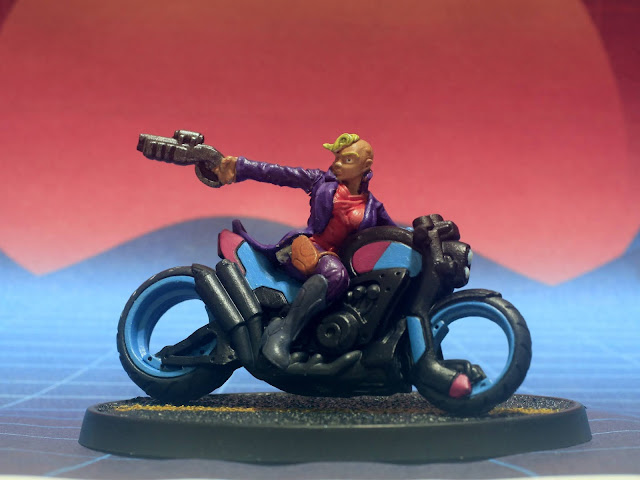 I saw this on Reaper's site a few months ago and thought it was pretty cool. It's one of those minis Reaper does that's just kind of there: I don't know if they're going to do a series of these futuristic vehicles but I hope so as I'd buy another. It's also another Reaper mini that has literally one painted example when you google it (well, two now).
My original plan was to paint the bike white with a very strong accent colour, either bright orange, lime green or hot pink. But I'd just finished painting a pink and white mini and I went right off that idea. As I was listening to synthwave (hi, Keith!) at the time I decided on a retro-futuristic look, so I googled 1980s motorcycles. 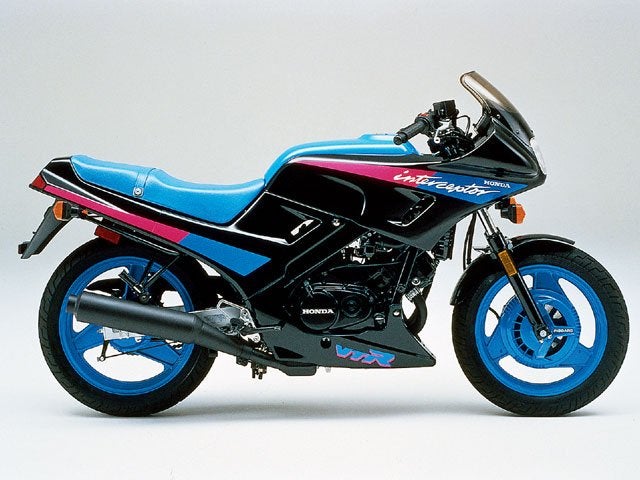 I'm in love. Say hi to the Honda VTR250 Interceptor. It's like someone took 1988 and turned it into a motorcycle. Black, pink and electric blue, all classic synthwave colours. Perfect, and pretty straightforward. 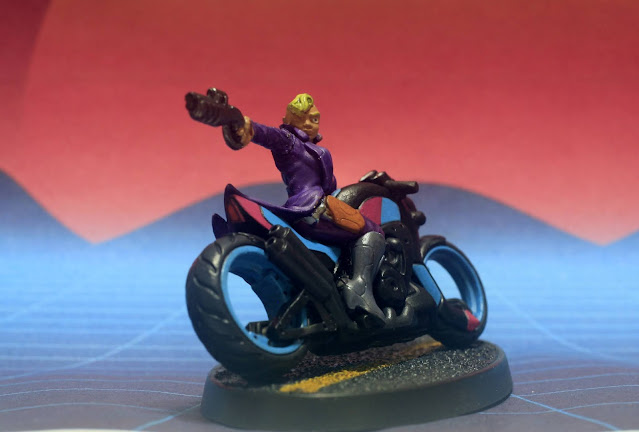 So, black all over, mixed with some Dark Prussian Blue to add more depth. I did the tyres, exhaust, handlebars, exposed bits of engine and any other mechanical bits in Black Grey to differentiate it from the bodywork, and once all that was on I gave the whole bike a once-over with matte varnish. One thing I've noticed about Vallejo Black is that it can rub off very easily, even over a decent coat of primer. 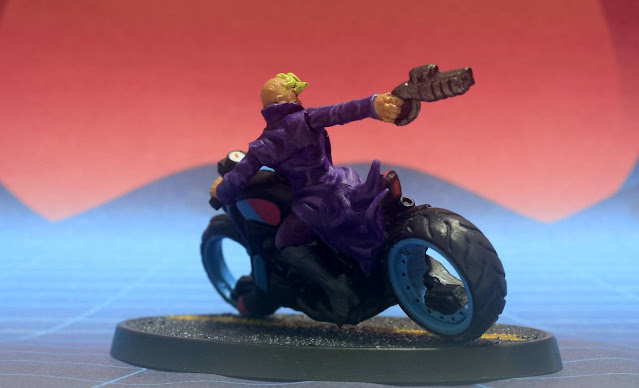 The next stage was to paint the blue bits with Electric Blue, which is a strong vibrant shade. I added some flow improver to help the blue get to where it needed to be. I started with the wheels and brake discs and then did the bits on the bodywork and the forks. It took two coats but once it was on it stood out really well against the black, and I used more Black Grey to touch up the tyres around the wheel rims.

Onto the Pink, which was a pain to apply. Again I added some flow improver and used it on the rear part of the bodywork, the fuel tank and the tips of the forks. It took four coats to get decent coverage over the black and the vibrancy I wanted, but it turned out really good. 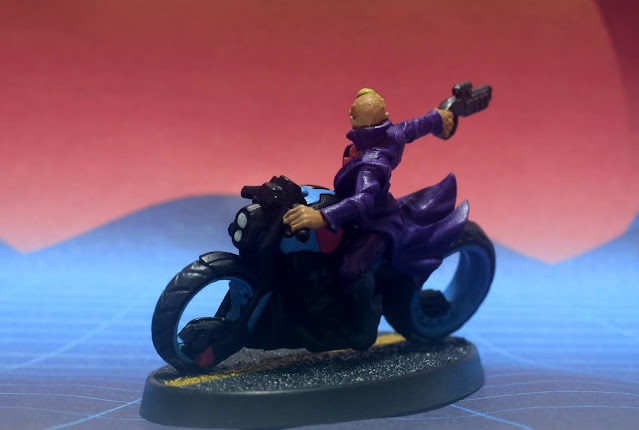 And now it's time for the rider, who I'm assuming is Theris Vinsom. I wanted to keep the synthwave look going, so I used three other classic colours: Violet for her coat, Purple for her trousers and Wild Rider Red for her top. I went for Sombre Grey boots and Yellow Green hair.

I had to do a ton more touching up here and there as I kept finding spots of one colour on another. I finished the bike with some very light blue-white for the headlights, a couple of Red lines on the dials, and some Vermilion for the rear light.

As for highlighting the black... I didn't. I could just see it going horribly wrong. I think I'm going try painting the bike's bodywork with gloss varnish, of which I own none so I'll have to pick some up.

The base is just covered with Vallejo Black Lava texture paste given a quick highlight with Dark and Neutral greys. I used masking tape to paint a rough white line in a slight diagonal, then went over it with Transparent Yellow and Black Wash.

I printed an absolutely classic synthwave backdrop and really should have used matt photo paper to prevent the paper from warping, but it works. I like this mini a lot, but the one huge downside is that even though it's moulded in grey plastic (the new Bones USA line) the model, especially the rider, is every bit as soft as the old Bones White stuff. Her arm is separate so it broke off twice while painting, and to be brutally honest I think the gun is awful. Aside from that it's like nothing I've painted before, it was a lot of fun and I'm well happy with it.