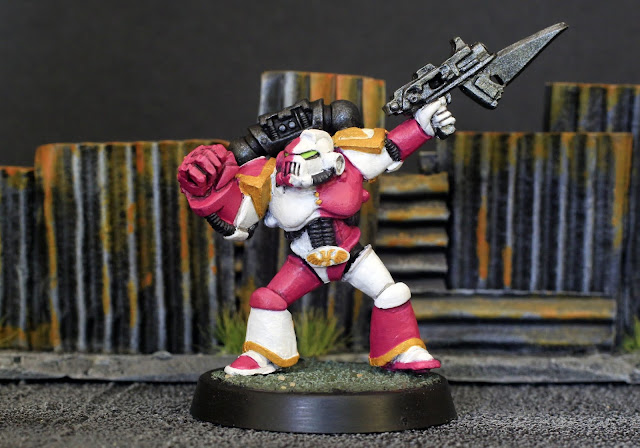 One day, home alone and bored, I typed "death eagle space marine" into Ebay. You can guess what happened next. 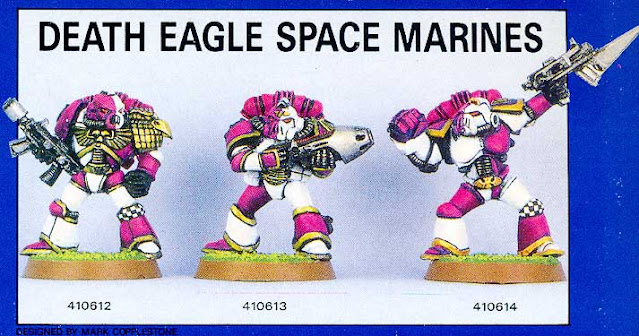 Here they are in their first appearance in White Dwarf 112 back in ye olden days of 1989, although a fourth one appeared in 'Eavy Metal in 1990. There was no other information on them, just this photo of three Marines in striking colours, weird helmets (this was the era when Beakies reigned supreme), Judge Dredd-style eagles and checkered kneepads. I googled them today and found a thread on 40konline where a guy says they were a special edition for a games day. That's it, that's pretty much it for why these exist.

I saw them in White Dwarf and I hated them. Hated them. Mainly because of what I then thought was the bloody stupid paint scheme; I'm afraid that as an Ultramarines painter and player, these looked... trivial, I guess. Just goes to show that my imagination needed a bloody good kick in the arse. What I didn't notice back then, and what's since caused a lot of comments about these models, is that the one on the right appears to have boobs. These odd models were pretty much overshadowed by the main article in that issue: the release of and rules for the new Terminator boxed set.

There's also a lot of speculation as to where the Death Eagles come from. There is a chapter by that name but it wears black and white armour. Even to this day people wonder if they're loyalist Emperor's Children, and designer Mark Copplestone probably never imagined that his weird one-off Marines would still be alive and kicking in 2021. 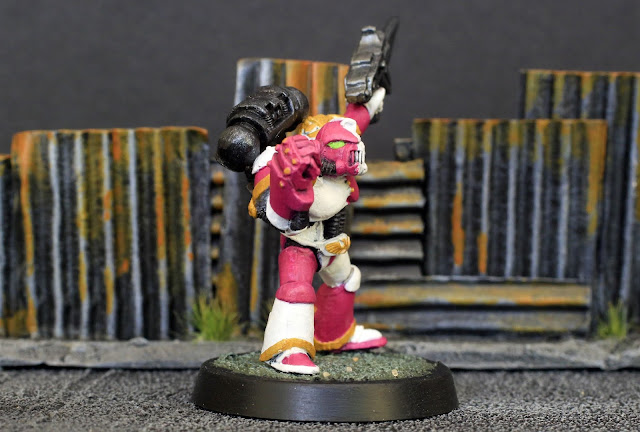 He... she? Whatever. The Marine is a pretty good sculpt without the flash that makes older Citadel metal sculpts a pain in the arse. White primer all over was the obvious way to go. My usual plan when painting a model that's white and, in this case, pink is to do the colour first, as it's a lot easier to paint pink over any white spots rather than putting 15 coats of white over a spot of pink. I used Vallejo Wizard's Robe, a magenta, for the pink; the Death Eagles in the original White Dwarf are a darker shade and don't look like they were painted with Citadel's Titillating Pink, which was an intense but light shade that was sadly binned years ago. Wizard's Robe works well for this scheme. It took two coats to get it to cover but I was happy with the result. 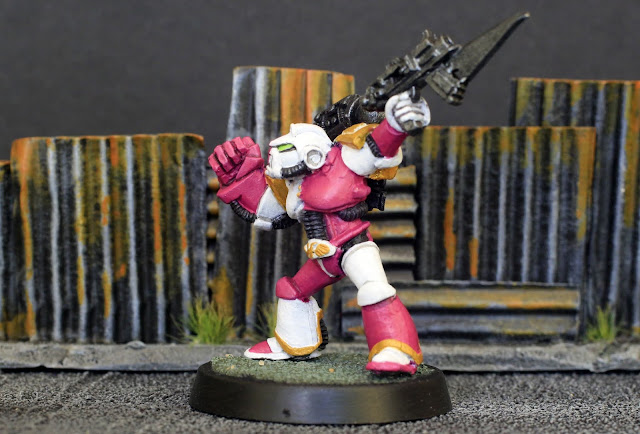 With the pink done I used Black on the bolter and pipework (there's a lot of it) and then Filthy Brown as a basecoat for the gold trim and eagles. The pipes were highlighted with a tiny amount of Neutral Grey and happily the Brass went on with one coat and was highlighted with a touch of Gold.

Now I have to highlight the pink, yay! I added some Pink to the Wizard's Robe and just gave those bits a light drybrushing. I wasn't going for a Golden Demon, so I just got it to where I was happy with it and stopped. The models in the WD photo have red eye lenses but I thought green would be better, so I did them in Scorpy Green and a touch of Green Tone. 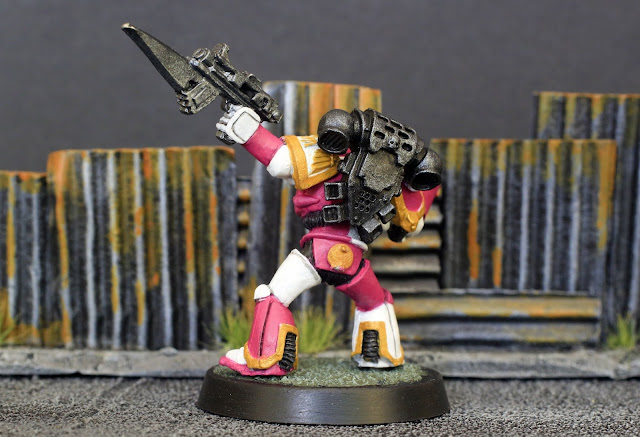 The backpack is black simply because I forgot all about it while painting the figure. I should have done it as I went along with the actual mini, so whoops. When it came to painting it I'll be brutally honest: I could not be bothered going through the whole pink-and-white thing again so just did it in Black with a drybrushing of Gunmetal Grey. You might have noticed that I didn't bother with the checkered kneepad as I've never been able to paint that pattern and I'm too old to start now.

To the key question: Does this stalwart defender of the Imperium have boobs? Now I have it in my hands (the figure, not the boobs) it certainly seems so and I can see why people have speculated about it. If this is the case then credit to Mark Copplestone for sneaking a female Marine into the sausage fest that is 40k.

Christ, I've just noticed I've chipped the paint on that brass disc on his bum. Great.

So after all that, was it worth it? Totally. Despite teenage me hating the mini and its paint scheme, and despite the the amount of touching up I had to do over errant bits of pink or white, almost-50 me loves it. It is a classic sculpt and the fact the Death Eagles were such a one-off puts them on the unique side of 40k history. As for the paint scheme... white is one of the colours I can struggle with, especially on large flattish areas like armour plates. It's the main reason I've never painted a White Consuls or White Scars marine. And the white absolutely needs more shading so I'll add that at some point. It is an awkward and time-consuming scheme to paint, so I don't think I'll do another Death Eagle despite there being another one on Ebay.