I'm pretty sure I bought this little chap, who I've christened Globrik, at the same time I ordered Aina. He's definitely an impulse buy as I cannot imagine why I'd actually need a space goblin commando. I don't know if Reaper was going to bring out a line of these, but they did make a total of three: the commando, a mechanic and one in power armour. 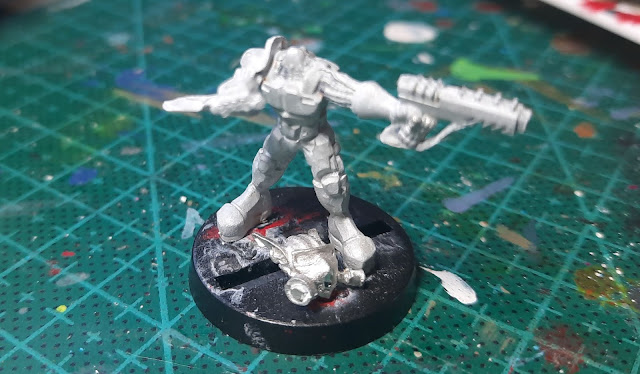 Here's Globrik, freed from his imprisonment in the storage box. For some reason I'd got as far as priming his body but gave up at that point, not even bothering with his head. 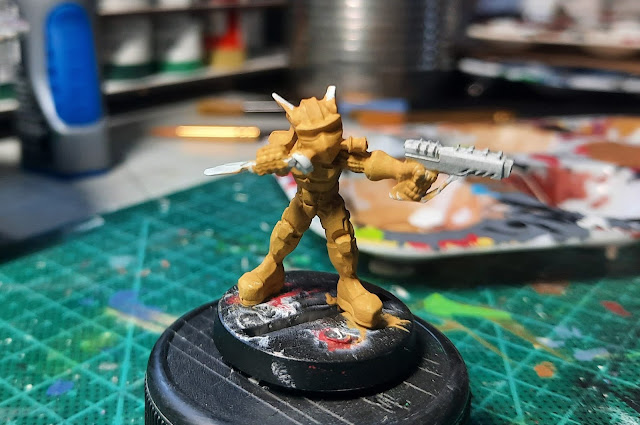 I decided that yellow would work for his armour so I gave him a basecoat of Golden Brown. As you can see I basically plastered him in it as I wanted to stick to Resolution 3 and get him done.
With the Golden Brown on, I drybrushed him with Sunrise Yellow to bring out the highlights and shaded him with Sepia Wash. While leaving that to dry I googled "space goblin" and was amazed to see this:
It's a Citadel space goblin from the first release of Rogue Trader back in 1987. Globrik does resemble him quite a bit, from the gun and knife to his general pose. It would be cool if Reaper sculptor Darryl Roberds was influenced by Rogue Trader. 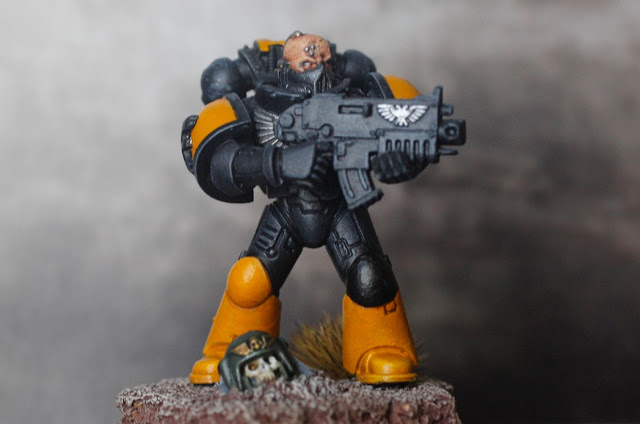 Yellow can be a sod to paint, but I wanted to use a technique I'd used back in July to paint my Tiger Claws Space Marine: once the shading and highlights are on, use yellow glaze instead of more paint for the final stage. After doing Globrik's ears and the visible bits of his head with Goblin Green and Scorpy Green and finishing his weapons, I applied one layer of the yellow. 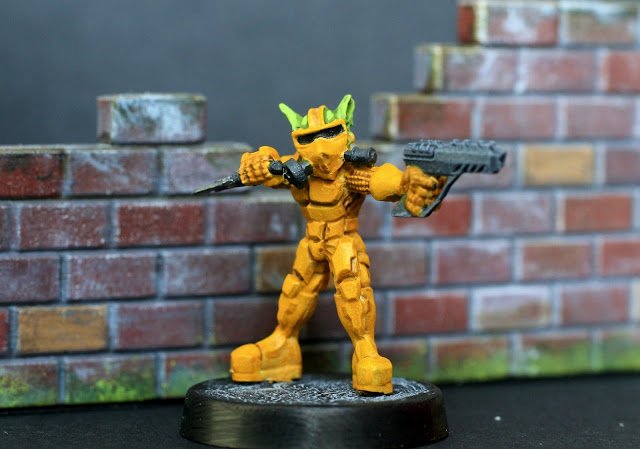 Uh... I'm not sure about how he turned out. "Way too yellow" is the first thing that springs to mind; he needs a secondary colour to break up all the custard shade. My immediate thought was to use black, but he'd just end up looking like the Tiger Claws marine in space goblin form. Talking of black, I should have used it to shade him as his armour, especially on the legs, doesn't have a lot of definition. Crap. I wish I'd done Globrik in red or blue. I'm almost embarrassed to enter him in the challenge.
So, should I try to tart Globrik up or just get on with something else?
Labels: alien, basing, painting challenge, reaper, scifi, vallejo