Table manners, and some resolutions 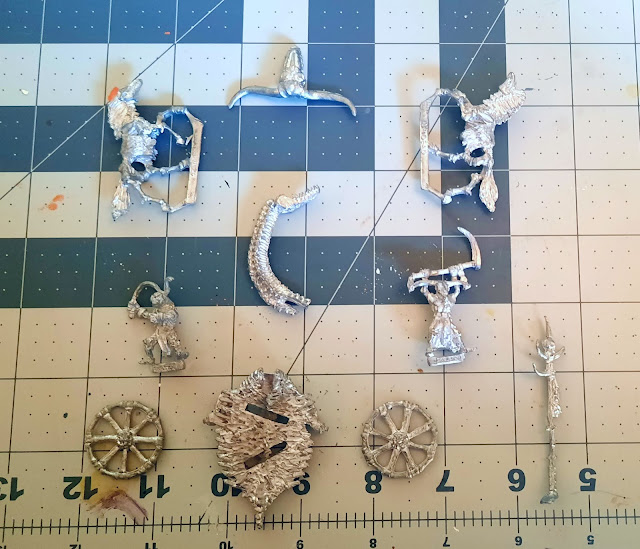 This isn't a painting update as it's impossible to do any at the moment thanks to every room in the house being in various states of messy. Pictured above are the component parts of my Oldhammer Undead Chariot, which I really want to start but can't. Sob.

Another major holdup is the lack of a desk. Me and Alicia have had several polite discussions around what kind of desk I'm going to get, with me saying this would be perfect but her pointing out that it doesn't suit the aesthetics of a house we've spent a lot of money doing up and instead this one would be better. I'll give you three guesses as to which one I'll be getting, and if you guessed "the one Alicia likes" you'd be right.

Said lack of deskage isn't too much of an issue right now as there's nowhere to put the bloody thing. Our new king-size bed frame turned up yesterday and all three boxes are currently stored in the kitchen because the bedroom isn't finished (I should point out that this isn't the fault of our excellent builder and painters). The spare room and living room are almost ready to be painted, which is great as the new sofa is due soon, the kitchen is bereft of wallpaper, the garage is still a maze of boxes and we've now spent four weeks living — and slowly going stir-crazy — in what amounts to a studio apartment, i.e. our ground floor.

But, as we keep telling each other, we have a house.

Anyway, now to my resolutions for 2021, the idea for which I am not ashamed to say I blatantly nicked from Keith's consistently excellent blog. 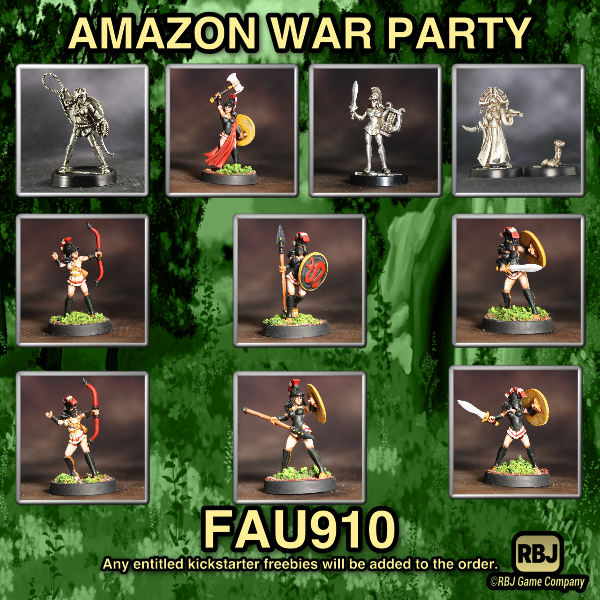 Get set up and paint: It's not like I've let a little thing like "not being able to paint figures" put me off buying figures. Back in November I got involved in a Kickstarter by RBJ Games and pledged enough to get the above set, the Amazon War Party. The minis are superbly cast with minimal flash and there's plenty of detail. I would have taken a pic of the actual figures I received but guess what? They're in a box in the garage.

In late December RBJ launched another Kickstarter for its new Yippers and Squealers line and I dived in, pledging $30 for the Squealers Core Set: 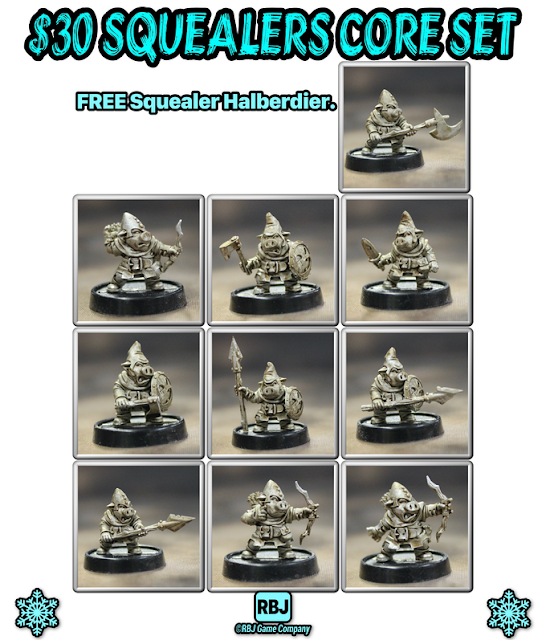 These petite porkers should be with me in March, and I'm looking forward to getting them. They're ADORBS.

Christmas — or to be more precise, Alicia — brought more metal maniacs in the form of Oldhammer Chaos Marines: 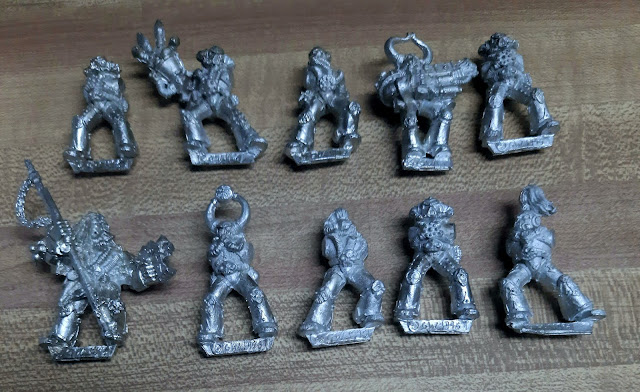 I apologise for the shitty cellphone-in-the-kitchen photo and, in case you're wondering, their backpacks/arms/weapons are safely in a box that miraculously isn't in the garage. Alicia has no idea how much Oldhammer minis cost on Ebay, so the conversation went like this:

Me: "Yeah, they're out of production so they're more expensive."

Alicia: "You can say that again."

Me: "I bought you that food processor you wanted [insert smiley face emoticon]"

These are going to be painted as a Slaanesh force, because of course they are. Back in October I bought myself a couple of old-school Noise Marines and an Oldhammer Dreadnought, which I want to convert to a Chaos model with some plastic daemonette bits. 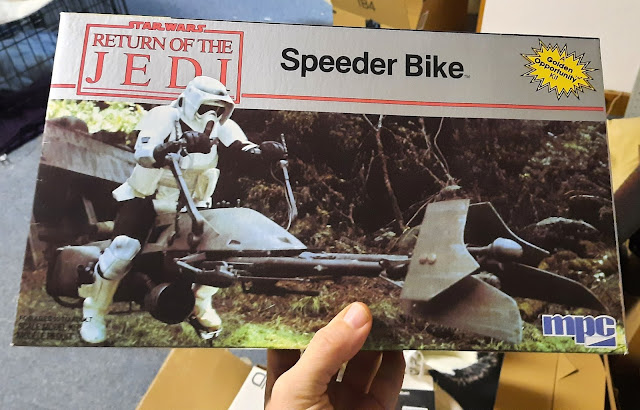 While perusing Amazon for Alicia's food processor (among other pressies, I'm not a total cheapskate) I accidentally bought this Speeder Bike for myself. I owned one back in 1984ish at the grand old age of 12, and I'm hoping that as I'm almost 49 I can do a better job with acrylics and an airbrush than I did back then with Airfix glue and enamel paints. I've seen Dave's superb bikes painted grey a la The Mandalorian, so that's an option if I don't want to go down the classic Endor route.
On top of these, I also have all the other unpainted figures I brought from California, I bought Cthulhu: Death May Die in October which comes with 45(!) minis, and as per usual I've picked up a few more Oldhammer minis from Ebay and some Reaper ones from Amazon. Not to mention the chariot at the top of this page.

Get better organised with my painting: Basically, I really need to finish the bloody things once I've started on them (for example, my beastmen). My mini painting is as random as the way I buy them; I just paint figures for no particular reason, but that means I have so many on the go that I get overwhelmed. Or I just forget about them, like the old-school Death Guard marines I bought in February 2019, haven't touched and only remembered when archiving old orders on my Amazon account. 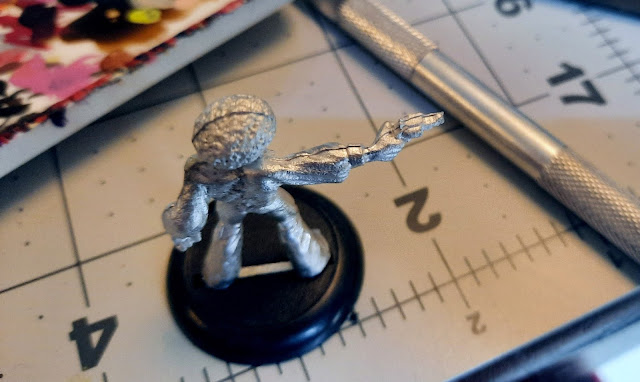 Stop fannying around so much: I can be such a procrastinator when it comes to starting a figure or project, and it infuriates me. For example, the mini above is Reaper's Horace "Action" Jackson, who should have taken all of an hour to paint except I ended up going down a rabbit hole after googling "black men's clothing 1970s ". I shit you not. Thanks to that I ended up very obviously not getting around to painting him.

Actually complete a challenge: If I'm gonna enter a painting challenge, I should at least have the decency to actually submit something. Remember the Warhammer Cottage? I obviously didn't. I'd like to paint a figure for Fem-bruary but I daren't declare my interest as I have no idea if I'll be in a situation where I can paint by then, so I'm staying out of it for now. Monster Mayhem is an absolute must for me as the last one was such a blast, and I have no doubt Dave will be hosting the Summer of Scenery challenge again for which I may as well enter the cottage as it might actually be finished by then. 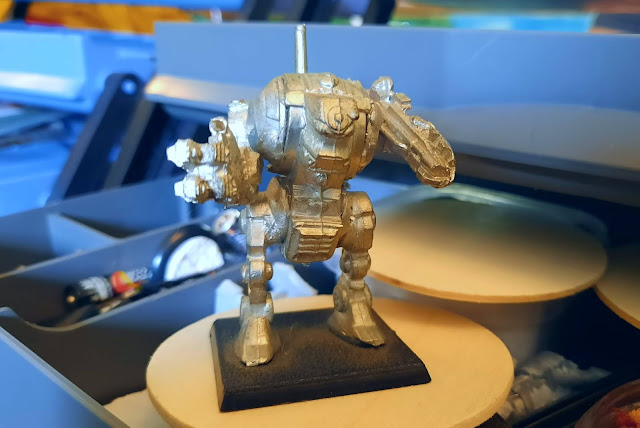 Get shit done: Finish my Slaanesh warband (beastmen, Chaos knights, and my final Oldhammer daemonette); paint at least one unit of my new Chaos Marines; get the Amazons done; convert and paint the Dreadnought, pictured above; make the Speeder bike; tackle the backlog of miscellaneous minis in my storage boxes; and anything else I can throw myself at. I'm really missing painting right now.

Keep up with other bloggers: I've met some great people (well not actually met, but you know what I mean) since starting PM Painting and I need to remember to keep an eye on what they're up to and how they're doing. A couple of them were kind enough to drop me a line when I essentially vanished from the blog in late November, and it's nice to know people care.

So there you have it. I've managed to yap on about painting without having painted anything. So... yay?
Labels: miniatures