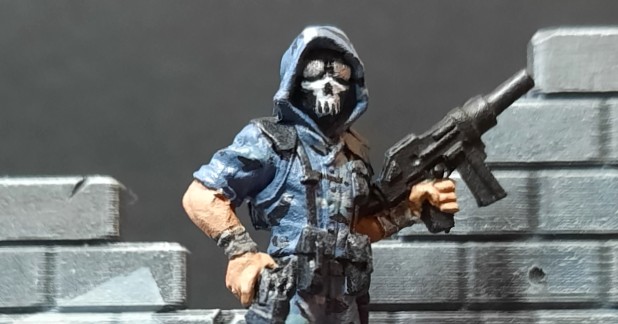 Ann's Neglected but Not Forgotten challenge has really spurred me to finish up older minis. While going through one of the many boxes of crap I've acquired thanks to this hobby, I saw a small grey figure stuck between some 30mm bases and realised it was one of my zombie survivors. 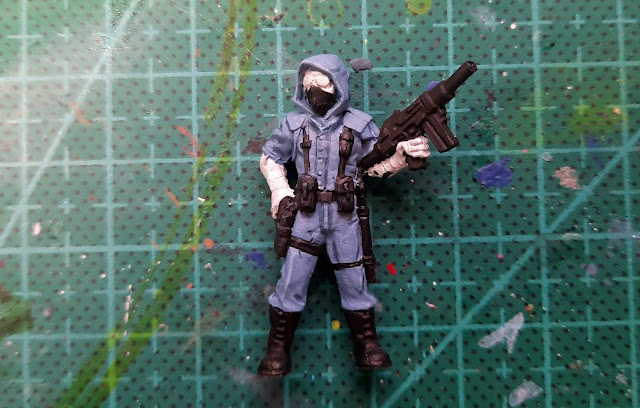 The Post-Apocalyptic Hunter — or Trevor, as I've named him — was started in the plague-free era known as January 2020. Contrary to the challenge's name, I had totally forgotten about him. But meeting Tevor again, I had vague recollections of wanting to paint him in a sort of urban camo scheme like this: 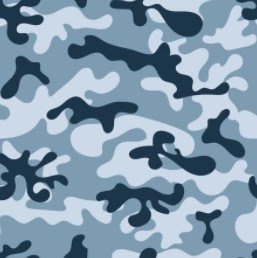 I'm pretty sure Trev was sent to the Magical Box of Unloved Lead because I bottled out of doing the camouflage pattern and tried something easier instead, like making Erebus get down off the sofa or finding a Netflix crime documentary that I hadn't already seen three times. Trevor's a really cool sculpt and I think I could at least have a go the camo now. The only thing I really don't like the grey I used — it's too light and too blue. 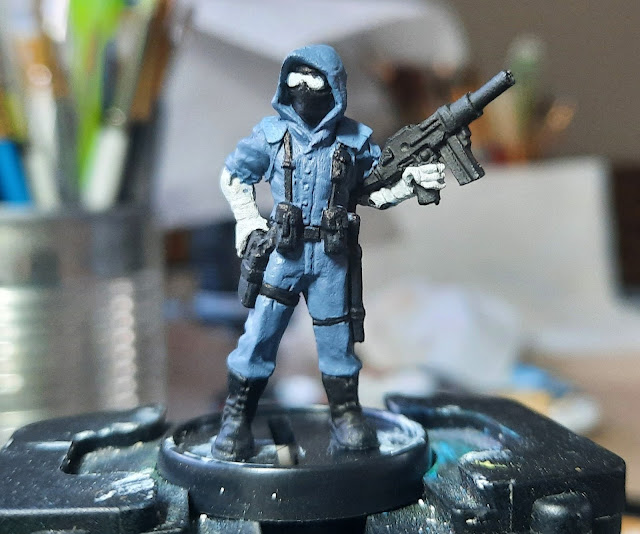 The first thing I did was repaint Trevor with Sombre Grey, which is still a bit blue but it's darker (which you can barely tell from this overlit pic). I also touched up the black bits and took an executive decision to paint all of his face except the goggles black to match his mask. 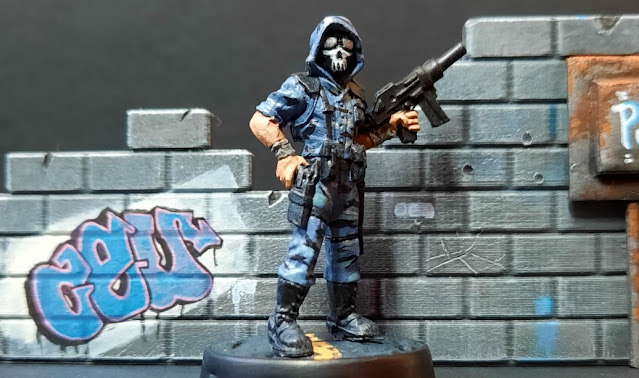 After that it was a case of doing the camo using randomish lines of Black, Dark Blue Pale and Ash Grey. I've said before that freehand is not my strong point, and even doing basic lines like this fills me with terror. I think I did an OK job. After that I gave Trev's pouches, belts, boots and gun a highlight with Black Grey and  Dark Grey, then painted his arms with a mix of Heavy Flesh Tone and Basic Skin and shaded them with Flesh Wash. His goggles got a coat of Plate Mail to make them look mirrored.
One final thing: His mask — which is hopefully Covid compliant — was screaming out for some sort of design, and a skull seemed the blindingly obvious way to go. Ooo, more freehanding. Yay. I sketched it out with some thinned White and went over it with Off-White.

Trev's base is the usual modelling paste painted to look like tarmac, and once that was done he joined Hans, Destiny and Pulse in another group of survivors.
Labels: basing, hasslefree, painting challenge, reaper, survivors, vallejo, zombie