Summer of Scenery: Warhammer Cottage 2 — I seem to have made some progress 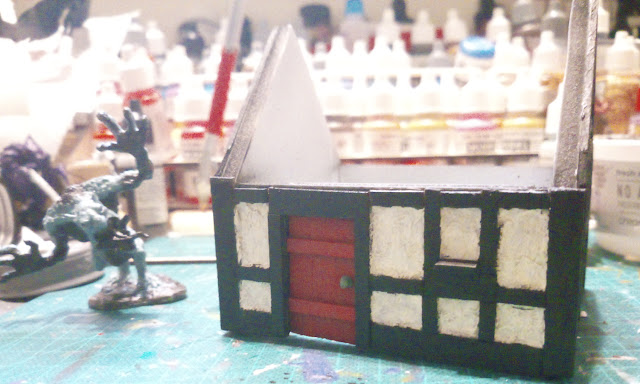 As we all know, Rome wasn't built in a day. It would have been, only they were waiting for the undercoat to dry. And the troll to bugger off.

I don't know why it's taken me four weeks to get to this point. I've been churning out figures over the past month so it's not like I'm in some kind of painting slump. I think that after the initial post I suddenly decided I lacked the confidence to actually build the cottage. I worried about making the chimney as I suck at sculpting, and I worried about the roof as it looks to be fiddly as hell. I also felt like I'd bitten off more than I could chew. So the cottage sat on the breakfast counter (our apartment is small) for a month, unloved and untouched, while I got on with figures as I still wanted to paint, I just didn't want to build. 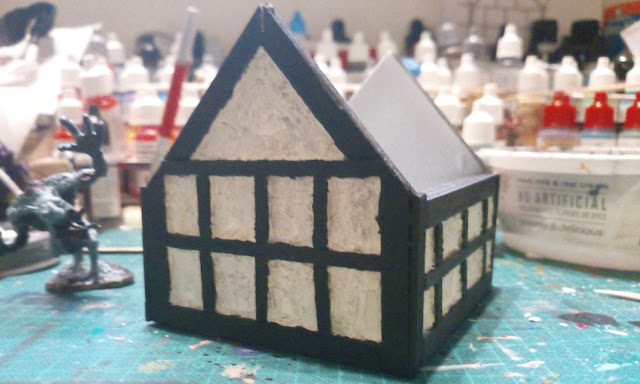 Anyway, a week ago I had an epiphany while walking the dogs (for some reason every bright idea I get is while walking the puppers). One of — or to be honest, my main — worry was the chimney. In the original plans, the chimney is made from greenstuff/Milliput and basically sculpted. You can see excellent examples of it here and here. My sculpting skills are pretty much limited to tentacles, greenstuff in general fills me with a sense of dread and so I became obsessed with the issue of the chimney, and it became this massive block to making any progress. I just couldn't face doing it.

Wait, what was I on about?

Oh yeah. So my bright shining lightbulb idea was, why not adapt the plans and simply make a chimney out of plastic rod and have it coming out of the roof? You know, the sort of chimney you associate with witches' cottages, the ones that are crooked and have a cone thing at the top. With this in mind, I realised I'd have to start again, so I did.

This time, I didn't bother with the template for the chimney wall, I just did two copies of the end wall. After gluing them together I hit the balsa wood, which went well until I had to work out how to cut the ends of the angled bits on the side wall. As I said before, this is like my crappest subjects at school — maths and art — with the added joy of woodwork, another class at which I sucked. Once I'd cut and glued on all the balsa, I airbrushed the entire model with Vallejo Black Primer.


I knew I needed texture on the walls, so I used Liquitex Modelling Paste daubed on with an old paintbrush. I did think about using PVA glue sprinkled with sand, and sort of wish I did, but the paste looked OK once I'd tidied it up. After it had dried I gave it three thin coats of Ivory and a once-over with Grey Wash to make it a tad dirty. I tried giving the wood a coat of Chocolate Brown but the balsa is pretty absorbent and I realised it was going to take several coats, so to save some time I decided to stick with black. I used to live in Herefordshire, which has tons of Tudor-style buildings, and they're usually black and white. I touched up the black with more primer, but I haven't started highlighting it yet.

While waiting for the paste to dry, I made the door from three bits of balsa crossed with two more bits. I painted it Red, washed it with Strong Tone and Black Wash and highlighted it with Flat Red and Vermilion. You can just about see the greenstuff doorknob on the (terrible) top photo, which has yet to be painted.

While I was buggering about with what is considered the most basic of the Warhammer buildings, the guys at Sowing Dragon's Teeth built the Warhammer Fantasy Townhouse, and it is fantastic.

So that's the progress so far. I have till the end of the month to get this done, but as we're setting off on our 3,000-mile move to New England in September I'm going to have to pack my painting gear and figures away in the next couple of weeks. I guess I'd better get my act together and do the roof soon.
Labels: citadel, fantasy, oldhammer, scenery, season of scenery, terrain, white dwarf