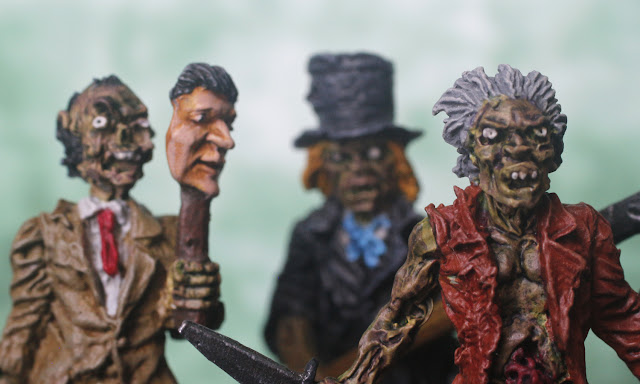 I'm not sure why these are called Urban Zombies as they look like they're from the Victorian era. Whatevs. It took me a while to like these enough to buy them as I've never been a fan of zombies with weapons. But during a undead-buying spree back in February I decided to splash out on them, and for once it wasn't to get free shipping.


Like the other urban zombie set from Reaper, these sculpts are by Bob Olley, who worked on Citadel's Iron Claw range back in the 80s. There is something a bit goblinesque/orcish about these zombies' faces, and Olley's sculpting style means a lot of fiddly areas where you can't quite tell if you're painting flesh or clothing. Orlygg over at Realm of Chaos 80s sums it up best as "gnarly." 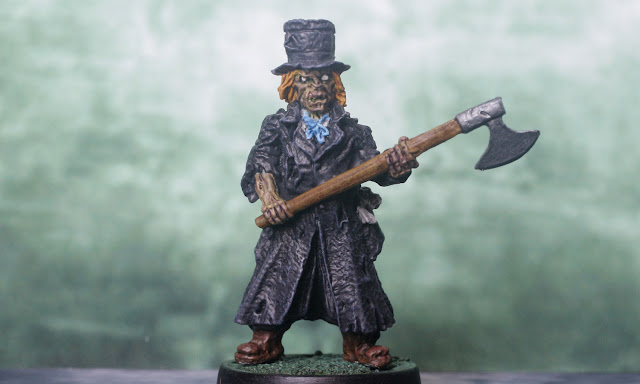 Long John was zombified back in the Victorian era and is still wearing his late-1800s clothing. His original name is lost in the mists of time; he's now known as Long John thanks to his large chopper (oooer).

He was by far the easiest one to paint; a coat of Vallejo Dark Grey followed by Black Wash, and a highlight with Dark and Neutral greys. Some Chocolate Brown for his boots, Gold Brown for his hair, Japanese Uniform for the axe haft and a touch of Sky Blue for his cravat and voila, one painted zombie. Because I'm an idiot I forgot to take a pic of the stuffed toy rat in his left pocket. 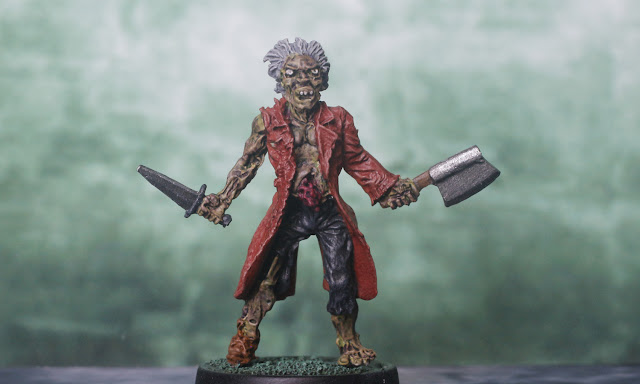 Eddie is the trio's leader, adept at slicing humans with either his dagger or cleaver. A former gangland boss in the 1950s, Eddie has taken his love of violence to new heights since becoming a walking corpse.

I made a trip — probably my last — to Brookhurst Hobbies last week and picked up some more Vallejo paint, cos you can never have too many colours. Red Leather looked interesting, so I used it for his jacket. It's shaded with Red Tone and highlighted with more Red Leather. The intestines drooping from his stomach are Red with a wash of Purple Tone to break up the manky flesh tones.

Eddie was almost named after Max Schreck, one of the villains in Batman Returns, as he does have a resemblance to him. 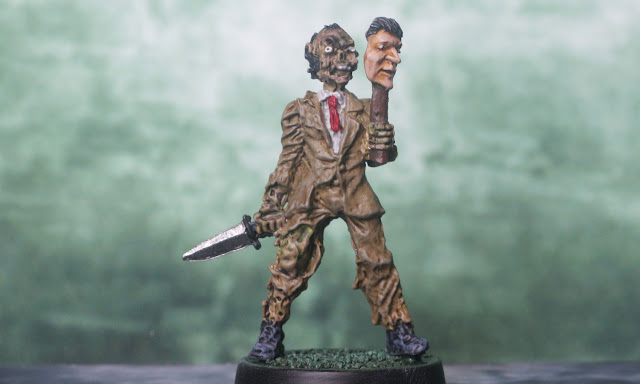 Peter is possibly the most dapper zombie in the universe, a holdover from his days of working in a bank in the 1930s. He attempts to hide his disintegrating face with a mask, but as he makes them from the flayed faces of his victims he's always having to find a new face every few weeks.

I went with Khaki for his suit, which wasn't a great choice as it's almost the same colour as his skin. A dab of Ghost Grey for his shirt and Flat Red for his tie finished him off, and his mask is Medium Flesh highlighted with Basic Flesh. 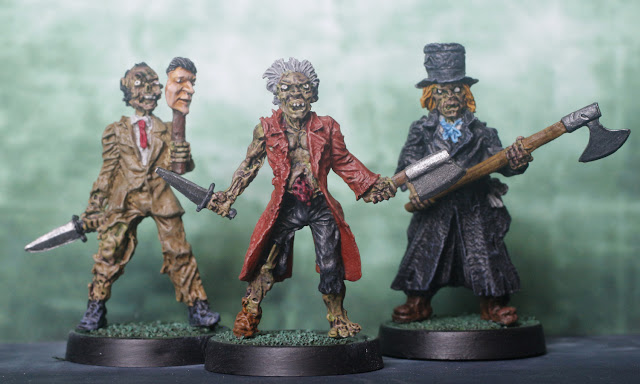 All of these delightful chaps' skin is painted with the usual Dead Flesh washed with Green and Purple tones, with dots of Mummy Robes for their eyes. The bases are the inevitable modelling paste with some sand, painted Mutation Green.
Labels: basing, creepy, horror, reaper, vallejo, zombie