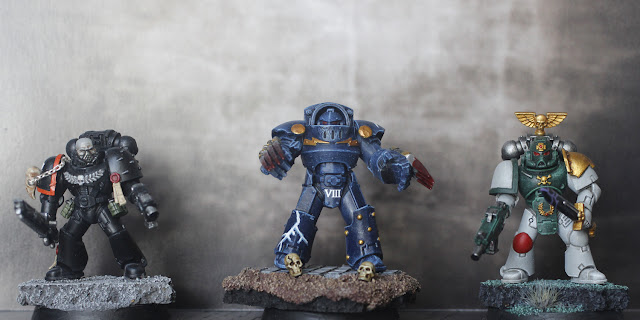 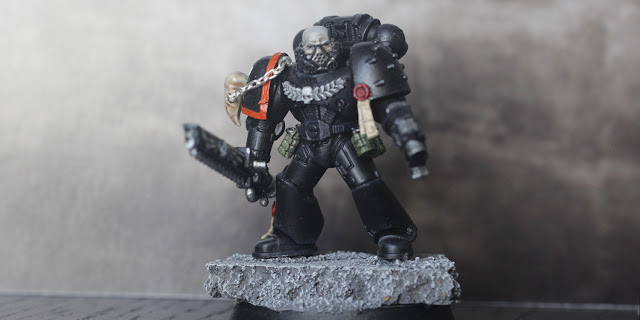 This handsome devil is a member of the Raven Guard. He's armed for close assault with a bolt pistol, grenades and a chainsword. As you can probably tell he was fairly easy to paint with just a coat of Vallejo Black and some Amaranth Red for the trim. But he should have been highlighted more. 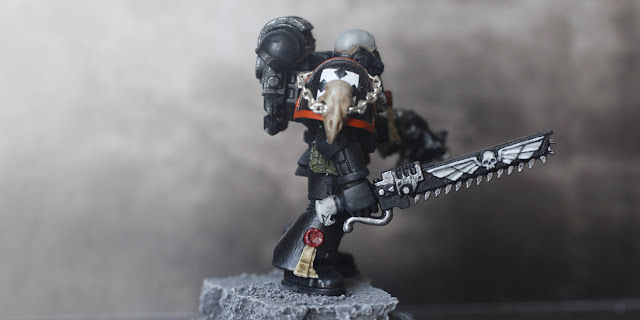 The Raven Guard are masters of infiltration tactics, although how the hell an eight-foot-tall armoured behemoth can "infiltrate" anywhere is a mystery. Still, they are one of the more interesting Chapters (almost wiped out, chased across the galaxy, almost wiped out again) and their Primarch was a pretty cool, albeit mopey guy after whom Mk.VI armour is named.

As I don't have any Raven Guard insignia decals I used an Assault Squad transfer (the crossed arrows) and a bird skull from the Citadel Box of Skulls. The chain holding it on was an absolute sod to get in position but it worked. His chainsword is an actual Games Workshop bit and they even managed to slap a huge winged skull on it along with the ubiquitous purity seal on his leg. 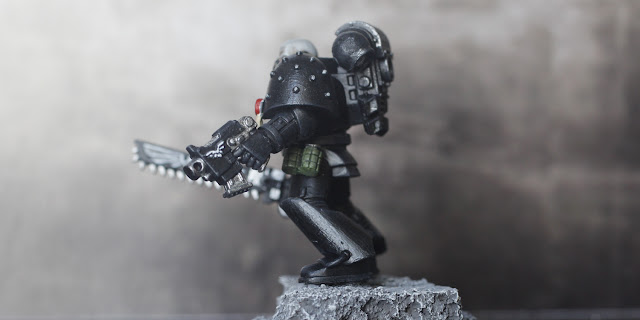 Apart from the old-school studded shoulder pad, this view of him is dead boring. So let's move on. 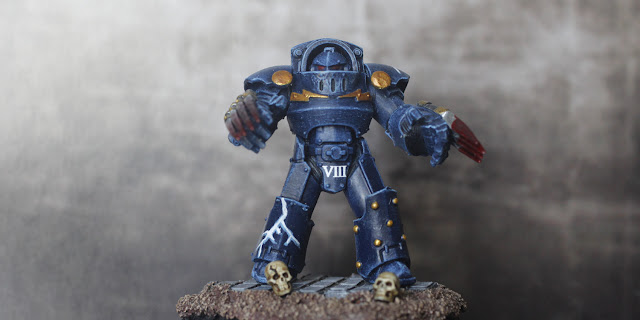 This gigantic walking tin can is a Night Lord wearing Tartaros-pattern Terminator armour. It's a much older version of Termy armour than my other one. I don't mean older as in made in the early 80s; this character is from the Horus Heresy, which happened 10,000 years ago in game time. Thanks to the huge success of the Horus Heresy novels, Games Workshop realised it was sitting on a cash cow and started producing the older marks of armour and weapons, and they sold like buggery.

He's painted with Vallejo Dark Prussian Blue over black primer, which was a pain as you can barely see the blue against the black. I actually missed a few spots and only noticed when I was doing the shading and highlighting. I should have guessed this would happen as this is the second Night Lord I've painted and I had the same fun and games back then. I used Vallejo Brass and Army Painter Shining Silver for the details. 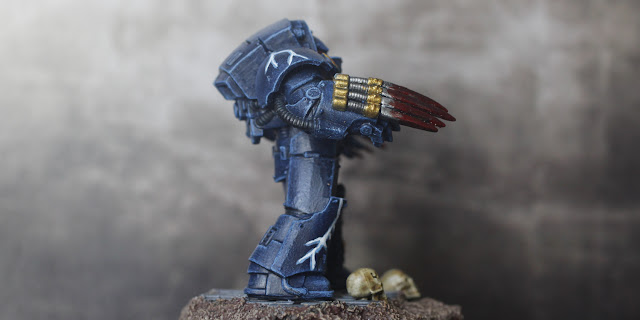 I wish I could get the hang of the lightning bolts. The tutorials make them look so easy.

He's armed with lightning claws, which can rip through just about anything. I used Blood for the Blood God to give them a gory look, although why people do this is a puzzle as several of Games Workshop's own novels describe how the forcefield around the blades burns off any residue. 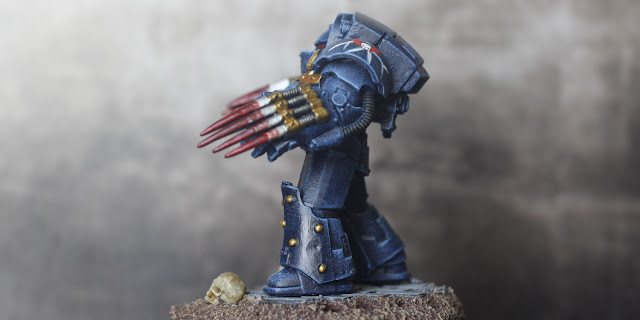 The Night Lords are one of the nine Legions that turned against the Imperium, which is absolutely no surprise seeing as its Primarch was an out-and-out psycho. The VIII Legion is now reduced to groups of smallish warbands spreading terror wherever they can. I totally recommend the Night Lords trilogy — Soul Hunter, Blood Reaver and Void Stalker — as they're among the best 40k novels to give a look into what it would be like to be a member of a renegade Legion. 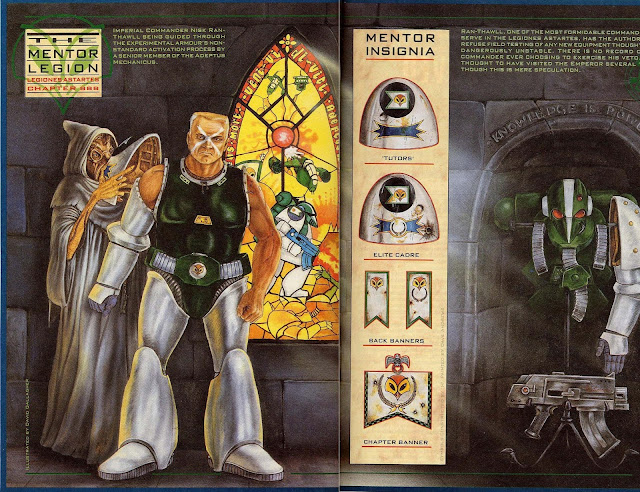 The  Mentor Legion has a bit of an odd history in the Warhammer 40,000 universe. They were introduced in 1988 (a year before I got into the game) and were the second Marine Chapter to get dedicated rules. Games Workshop put more effort into a brand-new Chapter — including the classic image above — than they did with other more established ones that had been around longer, such as the Blood Angels and Space Wolves*. The Mentor Legion came out of nowhere; they weren't even one of the 12 original Chapters from 1987's Rogue Trader: 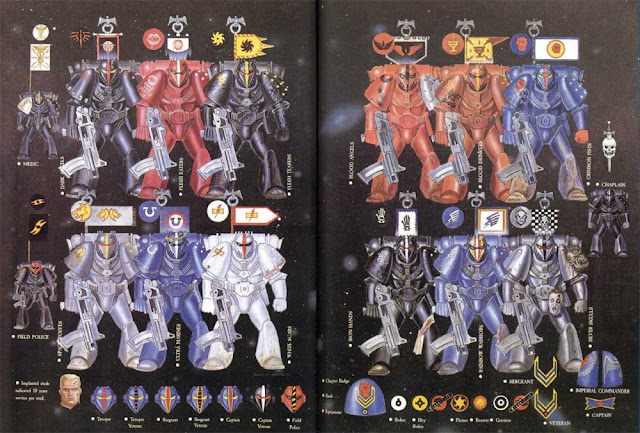 Games Workshop went all-out, with pages of special rules for the Mentors, bags of background information and plenty of stats. In a nutshell, the Chapter was full of specialists who could be attached to other Imperial forces to help them (hence the Mentor name) and had access to all the newest and best weapons and armour. They even have a stylized owl's head for their insignia.

And then... the Mentor Legion vanished. They were basically written off and retconned out of existence along with the Rainbow Warriors and Squats. They've made a bit of a comeback (and have a new eagle's head logo) but there's not much mention of their special abilities these days. They're now called the Mentors and are replacements for the destroyed Star Scorpions. 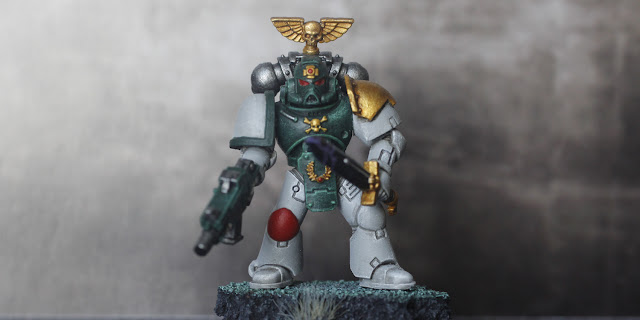 I decided to paint one up as the colour scheme is great and the nostalgia value appealed to me. Of course I didn't google the colour scheme and went by memory, so instead of using white I used light grey — Army Painter Ash Grey, to be precise. I really have to tattoo "google then paint" across my forehead one of these days. At least the Citadel Caliban Green worked.

I chose to (or at least tried to) make this Marine look a bit more important than your average genetically-engineered posthuman. His helmet is a odd mash of Mk.VI and VII and has the Terminator Honors icon on its forehead. The winged skull stuck to the top of his backpack was snipped off a banner pole. His left shoulder pad looked cool so I stuck it on and gave him a power sword and boltgun. 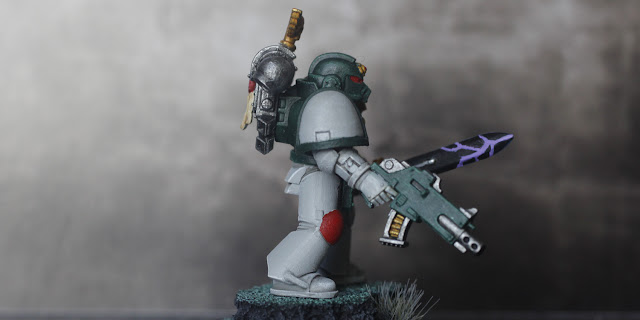 Dear God, he's even got a purity seal on his backpack. Looking at it months after I painted it, the grey really needs more highlighting and shading. I don't have Mentor Legion insignia so I didn't bother even trying to paint it on his shoulder pad. 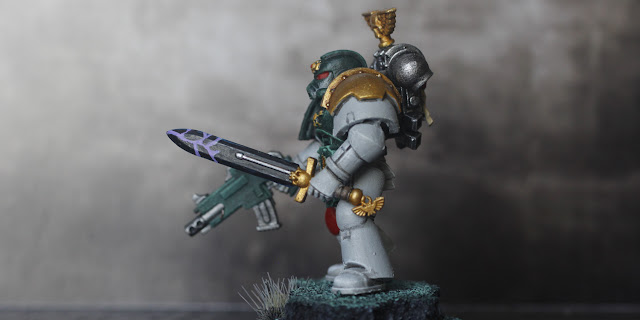 Given my crappiness at painting lightning bolts, my decision to do some on his power sword can be summed up with one word: stupid. I should have just gone with a silver blade. But overall I'm happy with him.

*This may come as no surprise, but the Ultramarines was the first Chapter to get its own rules.
Labels: 40k, army painter, basing, citadel, games workshop, scifi, space marines, vallejo