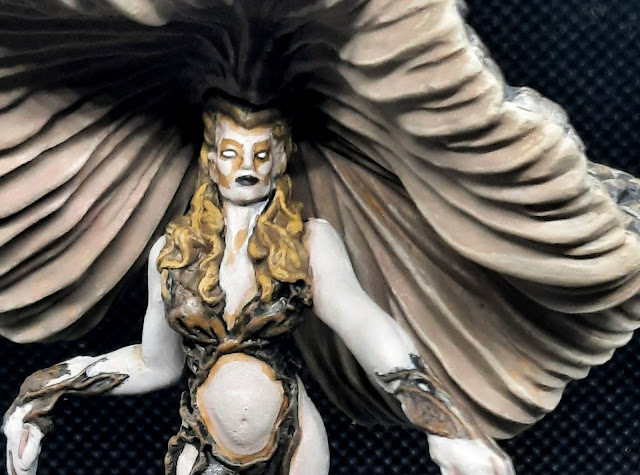 I'm really in two minds about this one: one mind thinks that my painting of the figure is not too good, and the other part thinks it's pretty good. Happily, my mind does agree that the base is awesome.

I've had the Fungal Queen for a few months. It's a Reaper mini that I've had my eye on for a while because it's a great sculpt and very imaginative, and it's not like I've painted a giant mushroom before. My only real issue is the painting; it didn't come close to what I had in my head. I took her colours from some fungi/mushrooms that sprout in our backyard, which have a pale white stalk with a cap that's black/brown lightening to an almost bronze shade at the top. 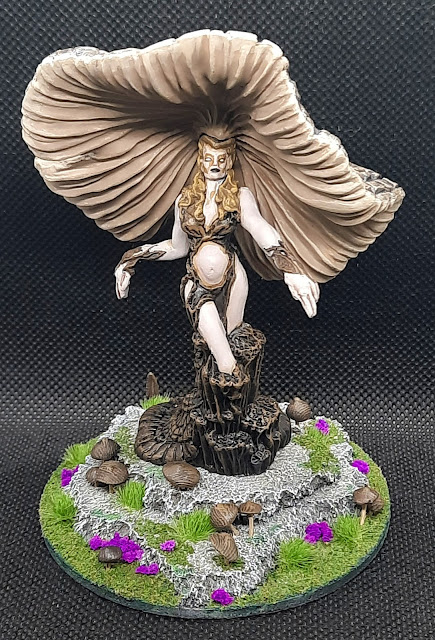 I started off by spraying her with black primer, and began the cap with an overbrush of a mix of Black and Chocolate Brown. Yes, I'm using much the same colours and technique as I used on my Alien. Once dry, I did a 50-50 mix of the same colours and did a lighter overbrush, and then added some Flat Earth and began drybrushing. The final stage was to add some Golden Brown for the final highlights.

The cap got a coat of matte varnish, and then I used thinned Black to fill in the sunken areas and tidy things up a bit. 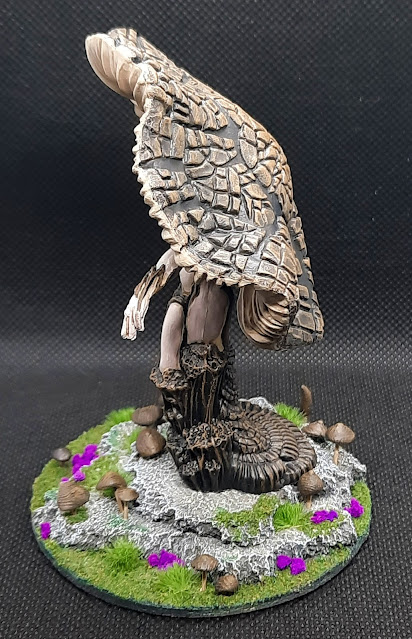 I thought the gills (yes, I did google "parts of a mushroom" to get the correct terms) would be a doddle, and in a turn of events that was not in the least bit surprising, I was wrong. I painted them with Pale Flesh, and then attempted to paint in the grooves with Black. Needless to say I got Black all over the shop, so I gave up and repainted the whole underside with Forest Flesh.

I then attempted to go over the raised parts of the gills with Pale Flesh, and it was difficult to keep the brush on the edges. This was by far the most frustrating part of the whole model even though it's literally two colours and the detailed bits aren't exactly small. I finally got them done, varnished the gills, and put the cap to one side. 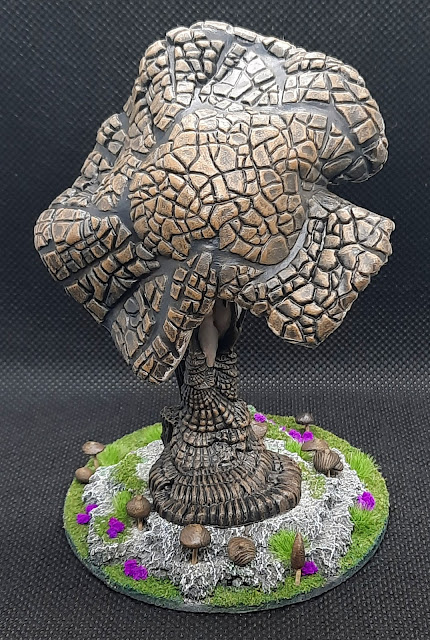 I painted the Queen's clothes the same way as the cap, and because I'm an idiot I did this the following day and had to re-mix the same brown/black shades. I managed to get the tones to match really well, and once done it was varnished as I was going to be handling the bottom part of the model while painting her skin. 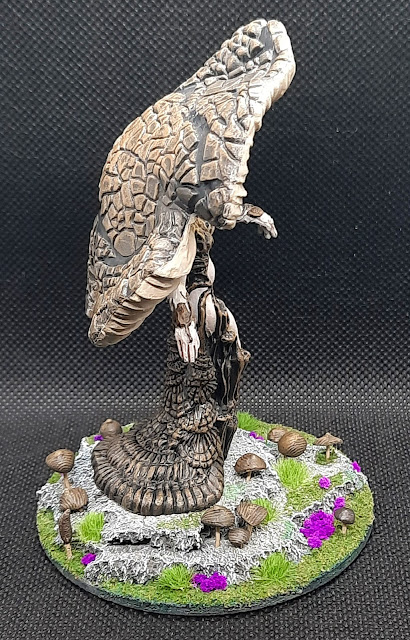 The Queen's skin was painted Pale Flesh all over and highlighted by adding Ivory and layering it on. I thinned some Forest Flesh to shade it instead of Seraphim Sepia, and it worked pretty well although I had to touch up quite a few spots.

I painted her hair with a mix of Flat Earth and Golden Brown, and after lining her eye sockets with Black and painting her eyes with a dab of Ivory, she was done. Yay. 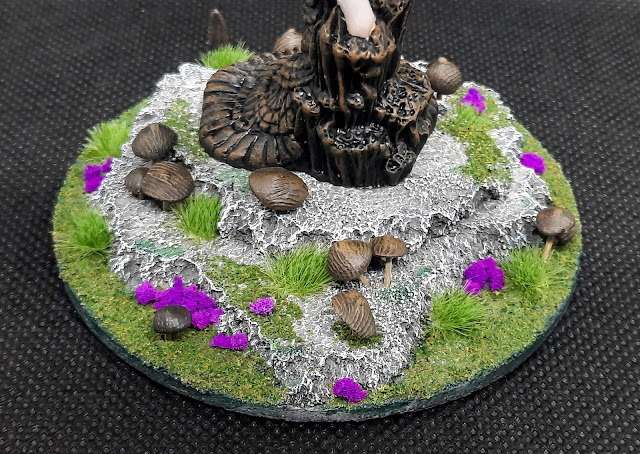 And now for the fun bit: the base. I made it while painting the Queen, and it's the project I mentioned in my post on the Bathalian. I actually took a bunch of photos of it while making it and then accidentally deleted them, so well done me.

To make the rock I just used some cork tile and glued it to a three-inch wooden disc. I sprayed it all with black primer, and once dry I painted the rock with Mechanicus Standard Grey, Neutral Grey and Ghost Grey.

The area without rocks was daubed with thinned PVA and then had a ton of flock dumped onto it. Once dry I put on a second layer of flock to give it some more depth, and I dabbed a little Biel-Tan Green wash onto a few parts of the rock. To seal the flock in place I sprayed it with heavily watered-down PVA.

While that was drying, I cracked out the Milliput and made some large mushrooms, using wooden skewers for the stalks: 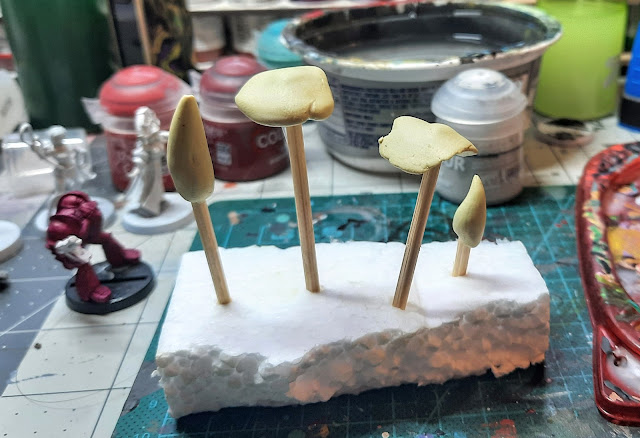 If you're wondering why they're not on the base, it's because I SOMEHOW FORGOT I MADE THEM. 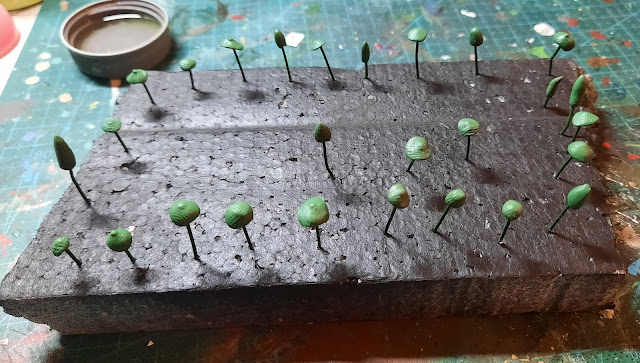 I also used greenstuff and some wire to make a load of smaller mushrooms. For once getting fingerprints in the greenstuff didn't matter as it helped add texture. Everything was left overnight to dry.

The next day I added some tufts to the base, and then got my purple flowers and scraped off some of the heads. I placed them onto small blobs of PVA and once dry they were sealed in place with more thinned glue. 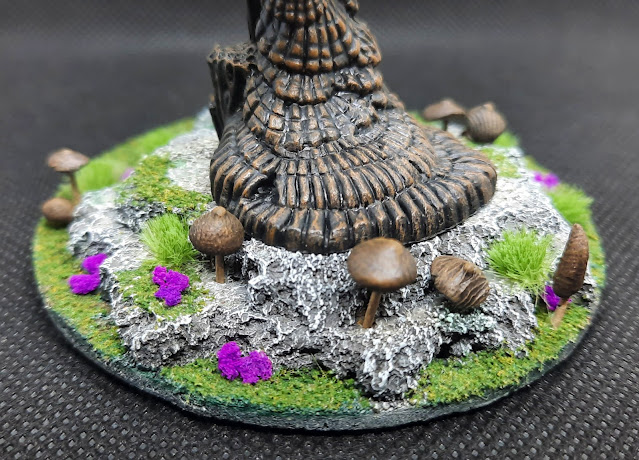 The small mushrooms were painted the same way as the Queen, and I used a pointed sculpting tool to make shallow holes in the cork and wood for them. They got a dab of superglue and were carefully placed into the holes.

And that was it, she was done! Except, as I've just realised, the rim of the base. Guess I'll be opening the Abbadon Black later today to finish it off. 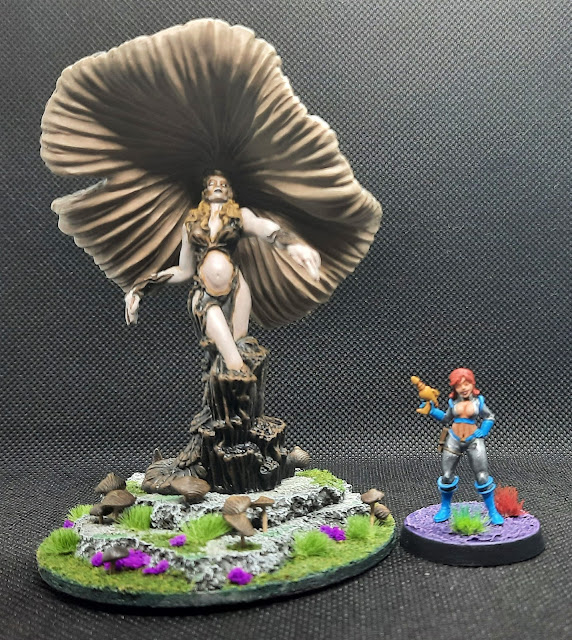 Here's the Queen next to Betty to give a better idea of her size. I'm sure that, like so many other figures I've painted, she'll grow on me in time, although hopefully not literally.
Labels: basing, fantasy, female, monster, reaper