Masque of the Killing Joke 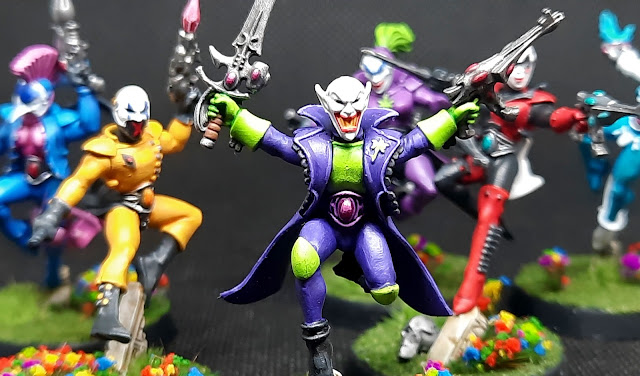 In case either of you were wondering why my output has dropped this month, meet the reason why. Oh, and you might recognise a couple of these chaps.

I've had these murder clowns since January and kept putting off painting them because Harlequins have one of the toughest paint schemes in the history of history. Although my freehanding has got a lot better over the past few months, I'm not about to attempt the diamond pattern that adorns modern Harlies. Then again, I'm also not going to attempt the original paintjobs seen on the back of the 1989 box set: 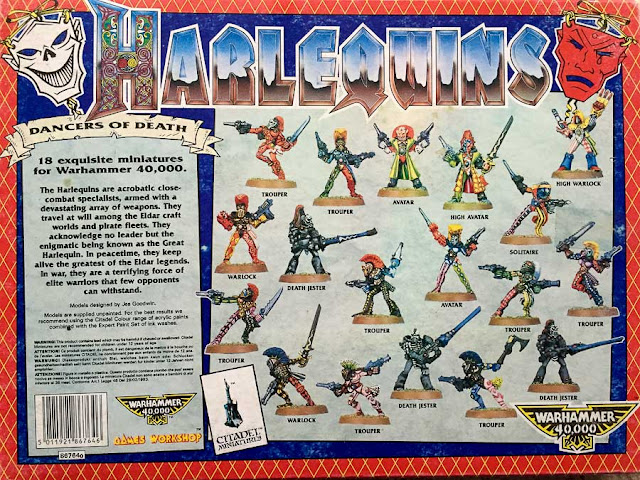 Darren Matthews painted all 18 of these little masterpieces over one weekend! It's taken me ages to get my six done, and I wasn't buggering about with diamonds, stripes and every colour under the sun. 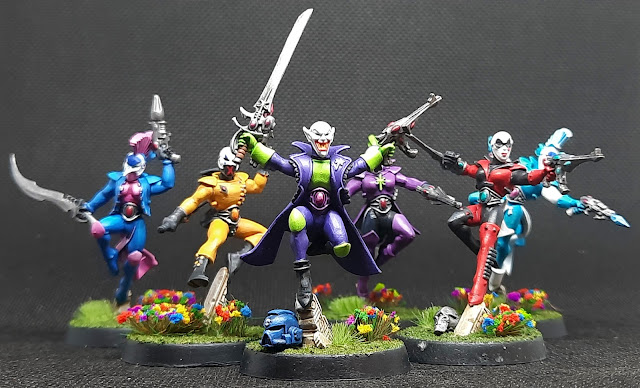 So in the box they stayed, until I had an idea last week: Harlequin. Harley Quinn. I think I might be onto something here. I wondered if they'd work as the Joker, Harley and some gangsters, and after looking over the sprues I decided to give it a shot. After getting over the shock of how delicate the parts are, at least compared to chunky Space Marines, and how fiddly they can be to glue together, I built six, sprayed them with black primer, and hoped for the best.
To any Harlequin/Eldar fans reading this, I have no idea which weapons are best and which character should have a gun, sword or both, so I just did what I wanted. 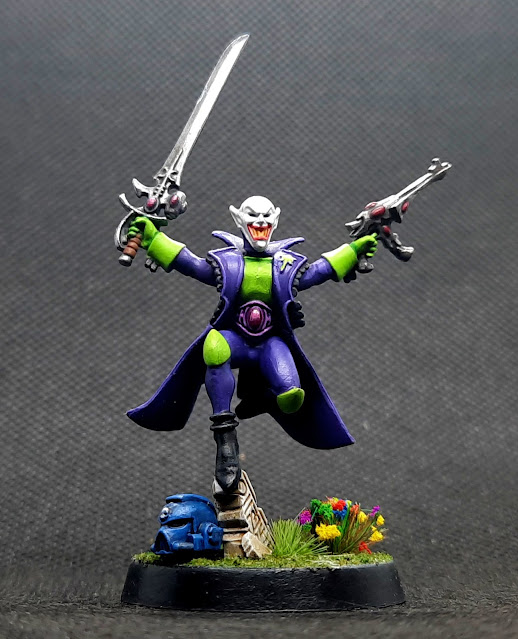 I kicked off with the Joker. I wanted to do a more Dark Knight/Heath Ledger style for his clothes, so I used Violet as the main colour, mixing in some Blue Violet for the highlights. The green areas are Scorpy Green over Olive Green, shaded with some Biel-Tan. His boots were left in black primer and just highlighted with some Black Grey. 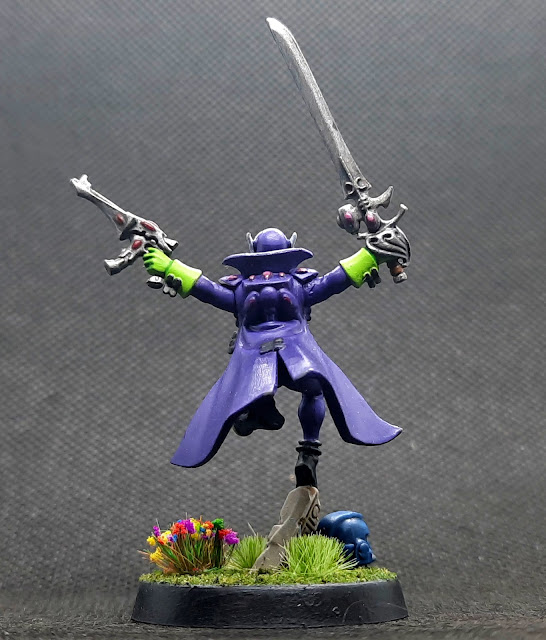 Like all the Harlequin models, the Joker has a couple of ribbons coming off his waist. I happily clipped them off because I don't really like them, and the stumps would be hidden by his coattails. The stones are Volpus Pink over White, and his mask was the fun bit: Filthy Brown for his teeth and Flat Red for his manic grin to give him a classic comic-book face. 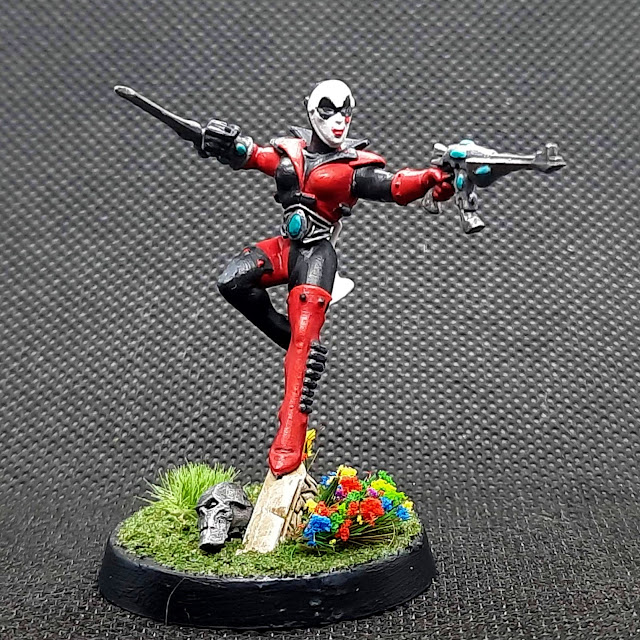 Harley Quinn is by far my fave of the bunch. I painted her as original Harley from Batman: The Animated Series because she's such a great character and has a superb costume design. She had a long ribbon coming off her belt/bum but I cut it off. The smaller one would be more hassle to remove and clean up, so I left it. I also clipped the ponytail off the back of her head.

I kicked off by painting all the red areas Khorne Red to get a solid base for the topcoat. I layered Flat Red over it several times until I got the shade I wanted, and then highlighted it with some Vermilion. The black areas got a light layering of Dark Grey. 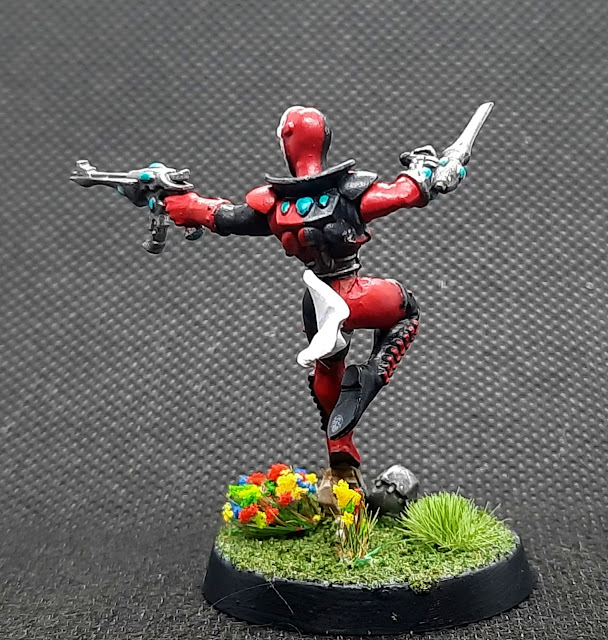 With the main colours blocked in, I painted her belt Plate Metal, washed it with Nuln Oil and highlighted it with Silver. I did her weapons the same way, and then did the buckles on her boots in the appropriate red or black.

The stones on her belt, back and weapons are Aethermatic Blue contrast paint over White. I probably should have done them red and black, but I just wanted a second colour on her somewhere. The ribbon that looks like a towel is White over Corax White, with Grey Wash to shade it. The final step was to paint her mask, with a Flat Red smile and Black eyemask.

So, I buggered up a couple of things. The colours on her head are the wrong way around as the black should be on the left, but it's no big deal. As anyone who's seen Harley's original costume knows, she has those jester-type things coming out of the sides of her head; I tried about four times to make some from greenstuff but gave up. Still, she looks great.

My original plan for the four others was to paint them like the gang members in the bank robbery at the start of The Dark Knight, in dark blues, greys and blacks. As you can tell, I had a bit of a brain fart and they ended up looking like Harlequin versions of Slaanesh Chaos warriors. I have no idea why I deviated from my original idea but I'm sort of happy that I did. 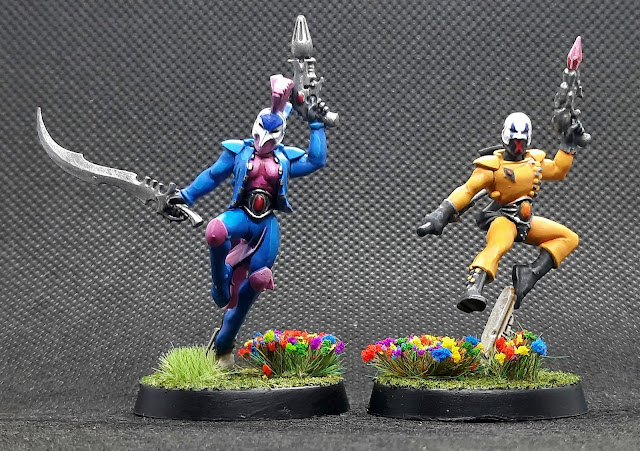 The left gangster was painted Flat Blue and highlighted with Andrea Blue and some Deep Sky Blue, which was a nice simple job. Her secondary colour, Pink, took several coats to cover the black primer but it eventually came out looking good, and a highlight of Pink mixed with White worked well. I did some basic shading in the creases with Drakenhof Nightshade.

Her mask is pretty simple, just some Blue on the forehead and a stripe down the top of the nose.

Citadel Averland Sunset has been a godsend to someone who hates painting yellow, and I decided to take the plunge and do one gang member with it. It only took three thin coats to cover the black, and once on I shaded it with Casandora Yellow and layered on some Yriel Yellow for the highlights. His boots, gloves and ribbons are Mechanicus Standard Grey to give a strong contrast to all the yellow.

His half-mask just got some Blue diamond shapes over the eyes, and I painted the Flat Red X over his mouth just to fill the space a bit. 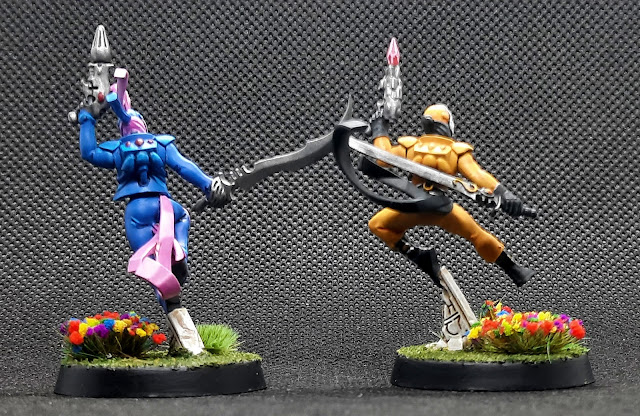 I left the ribbons on the gang members because I had no way of hiding the clipped bits, and I didn't want to fanny about trying to sand them smooth. 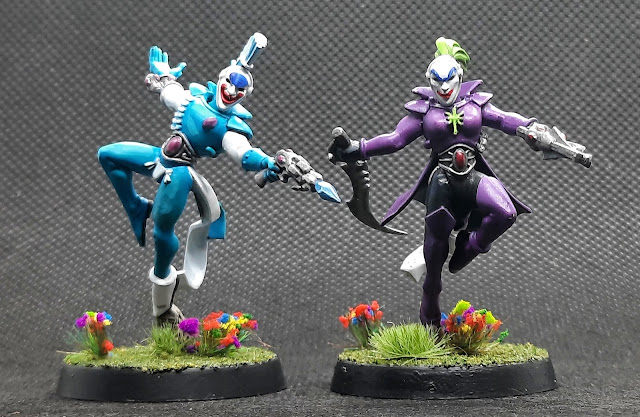 The left model was the last one to be painted, and was pretty much the easiest. I started him with Light Turquoise, added some Drakenhof Nightshade for the shading and highlighted it with a mix of Blue Green and White. The white areas got a basecoat of Corax White, some Grey Wash, and White highlights.

The right one turned out as a female Joker; I don't know why, that wasn't my intent. She's Purple all over, highlighted by adding some White and shaded with Druchii Violet. I left her leggings and gloves black, and painted her hair Olive Green and Scorpy Green. 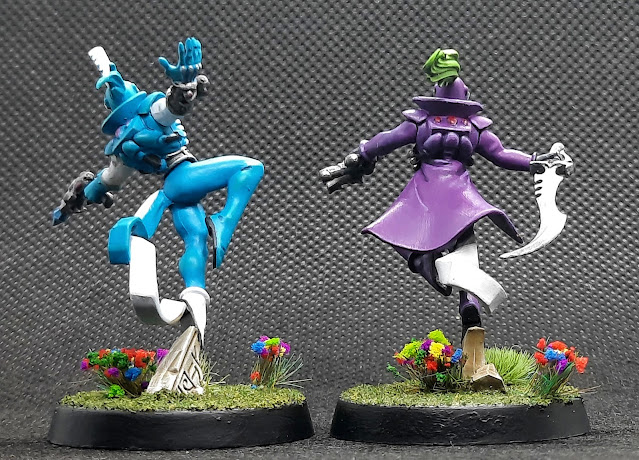 Both their masks got some Blue trim and nice big smiles in Flat Red, and the stones are Volpus Pink over White.

All the weapons are all Plate Metal, Nuln Oil and Silver, with the stones painted the same way as the ones on their armour. The only guns to get a bit of added detail are the neuro disruptors; I did the crystal for one in Deep Sky Blue and White, and the other in Flat Red and Averland Sunset. I realise that I was a bit lazy when it came to the weaponry, but after doing all those colours I just fancied something a bit easier.

The stone bits they're leaping off were painted the same way: Stone Grey base, Seraphim Sepia shade, highlights with Stone Grey, Silver Grey and a bit of Ivory. The bases have two layers of green flock and some tufts and flowers, and I added a Marine helmet to the Joker's base and a Necron head to Harley's.

I'm very happy with them, but at the same time bloody glad they're painted. How the hell people do these minis with all those diamonds is beyond me. In a couple of weeks this year's Monster May(hem) will be kicking off, ably run by Keith, and I've got several models to paint up for it. Along with Summer of Scenery it's my fave challenge and I can't wait.