So many layers of violet, but still they look blue.

Primaris Marines. I'm going to be honest: I've never been a huge fan of them. As well as being Beakie for life, I have a deep affection for the original Marines (or "Firstborns" as GW has christened them, and whoever came up with that deserves a good kick in the nuts). So you're probably wondering why I own two new and improved Marines. I don't. I own 30.

Come with me, children, as we travel back to August 2018. Me and Alicia are in the UK visiting my mum, and while in the local Tesco I notice a magazine by Games Workshop that isn't White Dwarf. I can't remember the title, but it's one of those "start collecting" type mags. Attached to the cover are three pots of paint — Abbadon Black, Retribution Armour, and Macragge Blue, because God forbid we paint them as anything other than Ultramarines — a paintbrush, and a sprue with enough bits for three Primaris Intercessors. All that for the introductory price of £1.99! So I shelled out twenty quid, around $35, on 10 copies just for the sprues. Ten Intercessors these days cost $50. For Christ's sake, one pot of Citadel base paint is $4.50, so I think I came out on top. 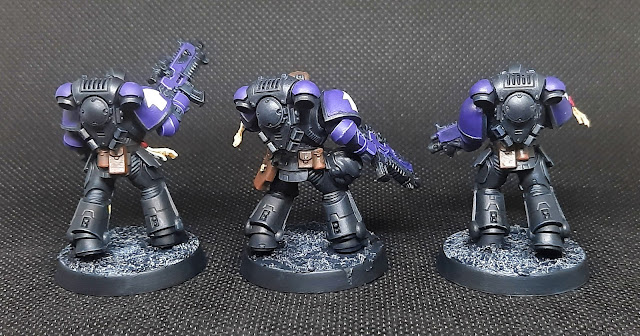 I kept all the sprues and brushes and some of the paints, and since then those 30 stalwart defenders of the Imperium have whiled away the years in a box. I decided to paint some last week, and after stumbling across the Dark Krakens on t'internet I liked the colours and thought I'd give it a shot. 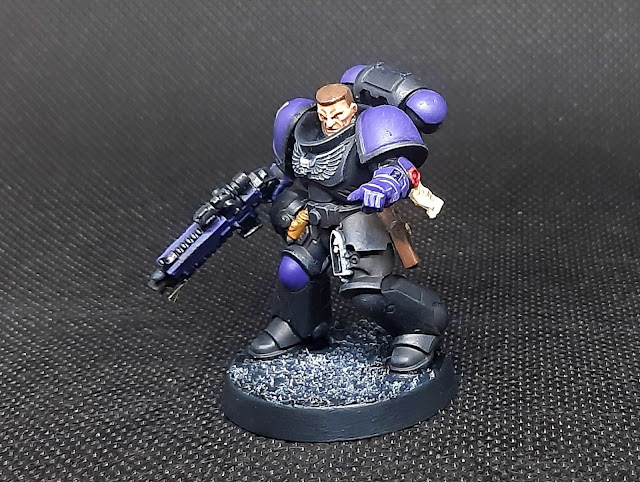 The Dark Krakens are a Primaris-only successor Chapter of the Salamanders, which was another reason I decided to go with them. I've always felt a bit sorry for the Sallies, not because of the whole Dropsite Massacre thing, but how Games Workshop treated them back in the day. Despite the Salamanders being in the Space Marine premiership — along with the Ultramarines, Blood Angels and Space Wolves — and appearing on the cover of the original painting guide, they were suddenly dropped in favour of the Dark Angels, who also stole their colour scheme. Games Workshop developed an attitude of "well we know about them but don't like to talk about them" towards the Sallies like they did with some other Chapters (hello, Silver Skulls and Lamenters!) and even retconned their pre-Heresy colours to the current lime/apple/snot green shade.

Mild rant over, on with the painting... 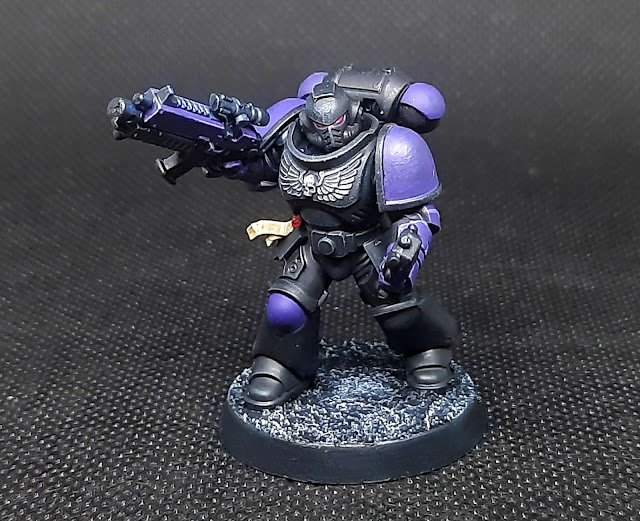 The Dark Krakens hail from the oceanic world of Naktis, which is permanently in darkness, so their deep purple and black scheme is very appropriate, not to mention dead easy. I spent all of two minutes spraying them with black primer, leaving them 90% done. See? Easy.

To give them a purplish tinge I made a mix of roughly 80% Black and 20% Violet, thinned it down and brushed it all over each model. After that dried, I gave them a light drybrushing with Mechanicus Standard Grey and a second lighter one with Ghost Grey, and looking at them now I should have done more in terms of highlighting them. Black armour looks great, but without decent highlighting it's just impossible to see details. 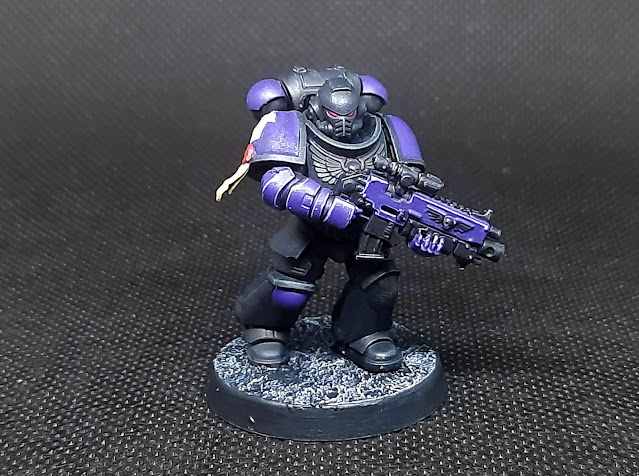 The shoulder pads, arms and bolter covers(?) were layered with thinned Violet, and I did some edge highlighting on some areas with Blue Violet. I went over their aquilas with some Ghost Grey to bring them out a bit, and then painted their pouches and purity seals. Although it's not part of the official scheme, I decided to do the plating on their backpack exhausts Violet just to add a touch more colour. The last detail was their eye lenses, which I painted Sunset Red.

To keep the trend of lazy basing going, I just splurged on some Vallejo Black Lava and drybrushed it with Silver Grey. The biggest problem I had with them was getting the tactical squad decal to fold around the curved shoulder pad; no amount of decal softener seemed to help.

The photos came out really well using the lightbox, but why the Violet has gone so blue is beyond me. But I do like the colour scheme and I'll be using it again, only with a couple of slight changes.