'I admire its purity' "A survivor, unclouded by conscience, remorse, or delusions of morality. I can't lie to you about your chances... but you have my sympathies."

While "let's nuke the site from orbit" and "game over, man, game over!" have entered pop culture lexicon, it's the above quote by science officer (and undercover android) Ash in 1979's Alien that really sums up how absolutely terrifying these creatures are. Next to The Thing, Alien is pretty much my favourite movie. I do like Aliens, and even have a bit of a soft spot for Alien3, but the original is by far the best, and feel free to flame me in the comments 'cos I ain't changing my mind. 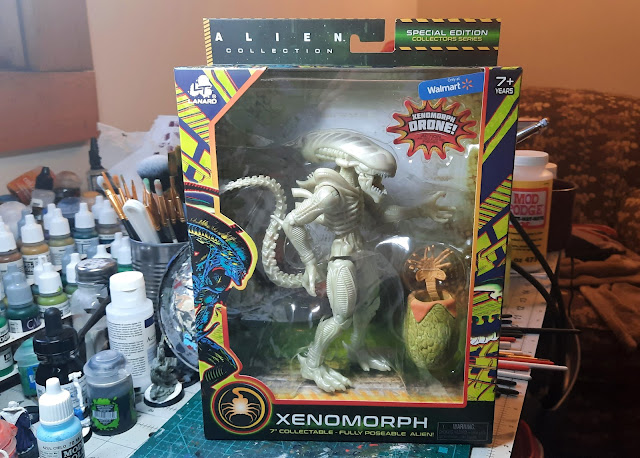 So when I spotted this bad boy at Walmart a couple of weeks ago, I threw it in the trolley with barely a second thought. It cost all of $10, and was one of three versions: this original xenomporph from Alien, a warrior from Aliens and the dog-creature from Alien3. The warriors were sold out, and for some stupid reason I didn't also buy the doggo, thinking I could pick it up on another trip... until I went last week to discover there's no more of any type in stock. Oops.

I named him Al. 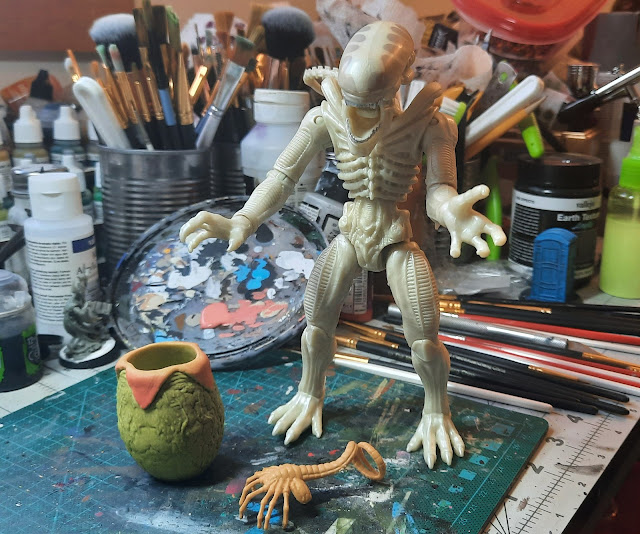 For the cost of one plastic Terminator you get a chunky 7-inch tall alien, an egg and a facehugger. I don't know why they went for this odd colour for the model; I would have thought black or dark green would have worked better. I was a tad disappointed to discover that Al doesn't glow in the dark.

There's plenty of detail on Al and not much in the way of flash, so I carved off what I could. The pattern on his head is a vinyl sticker, which I attempted to remove but gave up on as it's only going to end up coming off in strips. The only downer is Al's internal jaws, which are for some reason at the back of its outer mouth. I hoped there would be a button or slider on his head to push the inner jaws forward, but nope. Oh well, he's still awesome. 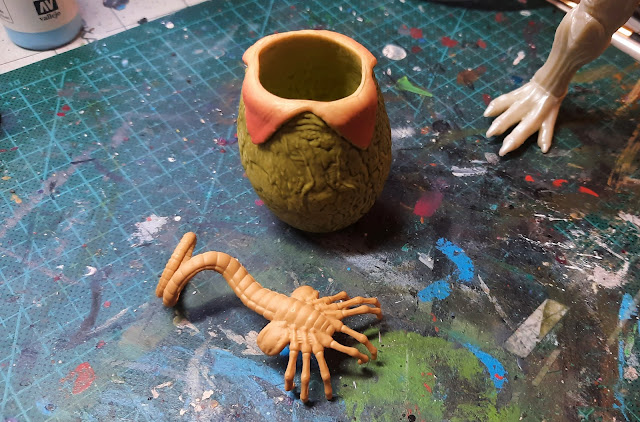 Given this is a cheap kid's toy, I have to give the manufacturer credit for doing a good job on the egg and facehugger. Both are well moulded and have lots of detail. The facehugger is supposed to sit up in the egg on its coiled tail, ready to launch itself into some poor sod's face. For this post I'm going to concentrate on Al and leave the other two for an easy post later on now. 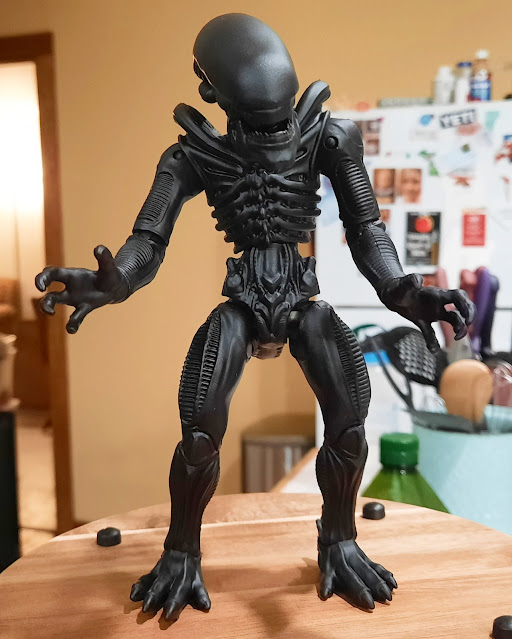 Here's Al after being primed, and he looks a lot more menacing despite standing on the spice rack thing in our kitchen. The black spray paint covered well and given him an even coat, which was a relief as I did have visions of it going wrong again.

And now for colours. Aliens have a tendency to look black/blue or black/green in the movies, and I used those schemes on my hunting horrors and cthonian during Monster Mayhem. I wanted to do something different, so I googled "alien paint scheme" and found this thread on Britmodeller.com about a repainted 20-inch NECA alien figure:

Surprisingly it's very brown. I'm assuming that's to make it show up better under the studio lights? Anyway, a bit more googling took me to the Vault of the Undead, where this black/brown scheme has been used to paint the creatures from the Aliens: Another Glorious Day in the Corps game. And you know what? They look great. The painter even included his recipe, and as I own four of the five paints he used and can substitute the fifth, I'm going for the same look, despite this xenomorph being from the first (and obviously superior) movie. 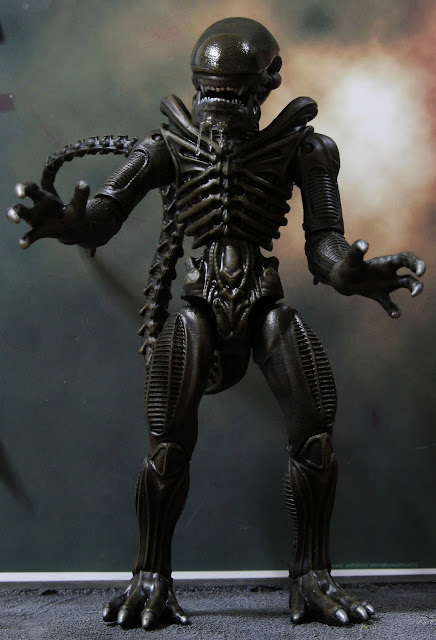 Here's Al in all his hideous glory. He was remarkably easy to paint, and it helped that I wasn't going to kill myself doing a high-detail job on a cheap toy. I started off with a heavy overbrush of Chocolate Brown mixed with Black, brushed in a top-down direction, to vary the base colour a bit. 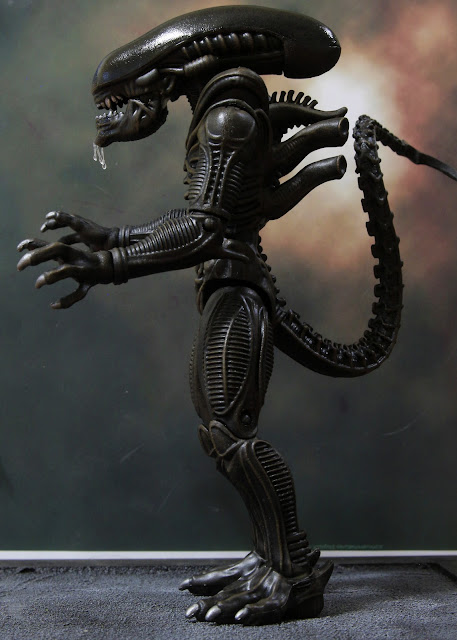 After that dried I hit Al with a lighter overbrush of Chocolate Brown, Flat Earth and a touch of Black, making sure I got all of, or at least as many of, the raised bits as I could. I tried to work methodically by doing the head, then torso, then the right arm and leg, then the left arm and leg. (I usually have a kind of SQUIRREL! approach to painting where I'll get halfway through, say, highlighting a figure's left leg when I'll suddenly start doing its back.) 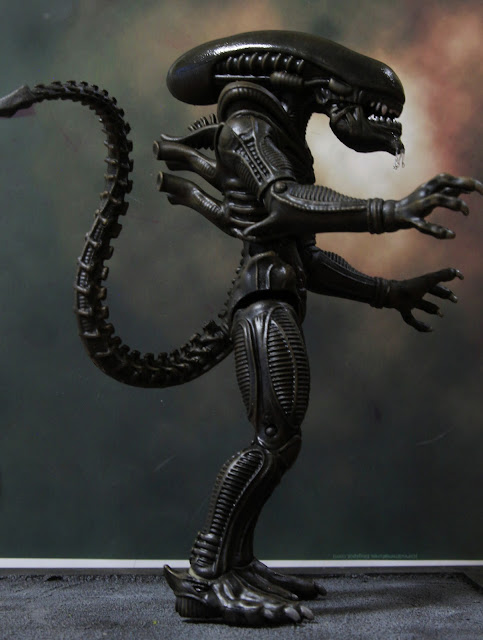 The last, lighter highlight was pure Flat Earth. Then came a couple of coats of my homemade black wash to tone down the chalkiness left by the drybrushing, blend the highlighting a bit and give the model a slight sheen. Al's teeth and claws were painted Neutral Grey before getting a coat of Plate Metal, and then the top of his skull got four layers of Ardcoat for that classic glossy look. 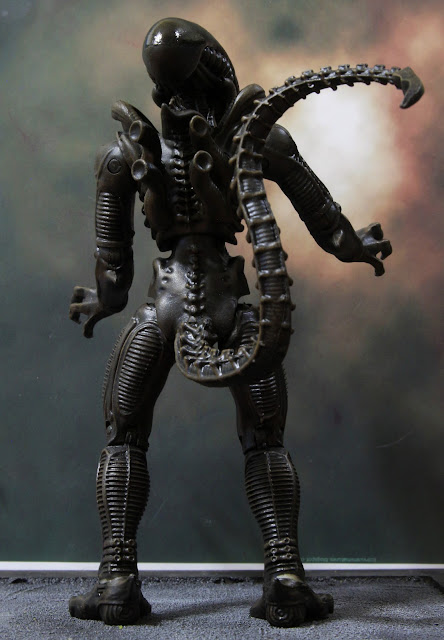 Christ on a bike, look at the missing paint on his ankles. And I double-checked him before taking the pics.

Anyway, the drool. An alien without drool is like bacon without eggs, or beans without toast. I was stuck for how to make it; for the goop on my monster egg I used E6000 glue, but I'm not risking possibly buggering up Al at the last minute by using something so sticky and hard to manage. After doing some googling it seems that using superglue and fishing line works well. Luckily I bought a reel of fishing line on a whim at Walmart months ago in a kind of "that'll probably come in handy some day" way.

I cut some shortish lengths and dribbled superglue down them, trying to tease out a drop at the end. The technique actually worked really well and was pretty easy to do. Before attaching them I daubed some gloss Mod Podge over Al's chin to make it look wet, then superglued on the drool and used more Mod Podge to try to blend them in. I think they worked OK, given my terror at knowing all was lost if I screwed this bit up.

Looking at his finished form, I'm so glad I decided to wander down the toy aisle in Walmart. He's turned out looking fantastic, even if my usual crappy photos don't totally do him justice, and I underexposed them to make Al look a bit more menacing... as if he needs the help.

The egg and facehugger are being worked on, and so far look good, so stay tuned for their appearance.