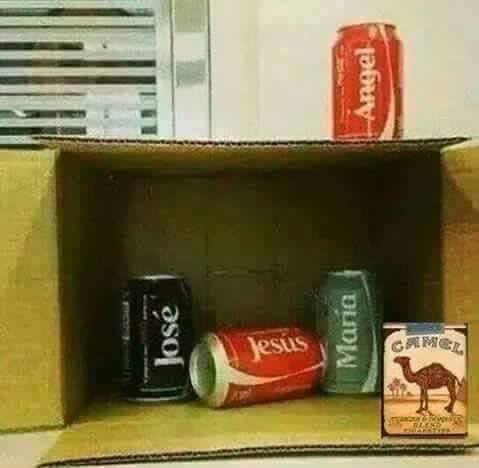 This is my all-time fave nativity scene. The pack of Camels just elevates it to absolute gold status. But unfortunately it's not the topic of this post. 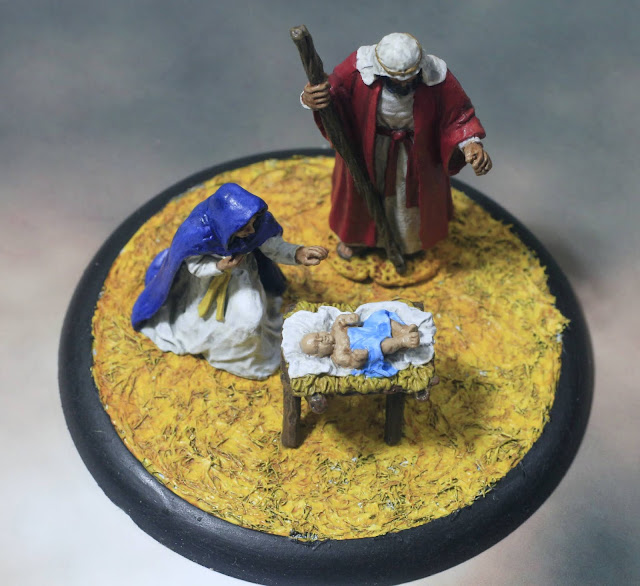 This is the nativity scene I'm talking about. I bought this set by Reaper for Alicia's mum back in June. We aren't religious, but her mother is, and I thought this would make a nice Christmas present for her. The set is the basic one, with Joseph, Mary and baby Jesus just about visible in the crib. There is a larger set that includes the three wise men, a shepherd, a sheep and a donkey, but I needed to get this thing painted and based and leave enough time for it to be mailed to California. It also has to survive a 3,000 mile trip in a box, so the less figures that could be bashed around, the better.

I don't know when this set was originally produced but it wasn't too bad in terms of flash and moulding lines. I had them carved off in a couple of minutes and the models were taken to the kitchen to be scrubbed with soapy water and an old toothbrush, something I thought I'd never do to baby Jesus. I also dropped him on the garage floor just before spray priming him. Oops. Then again, when I worked in SoCal a guy called Jesus made my sandwiches at the local Subway so I guess it's all part of life's great tapestry.

I have no idea what colours biblical characters wore, so I googled "Reaper nativity scene" and discovered that Keith over at Dead Dick's had painted this set for his mother back in 2016. Small world! 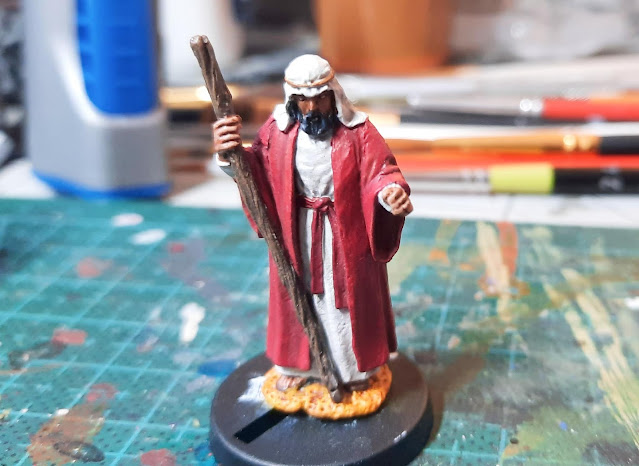 I kicked off with Joseph, and as I'd had a success painting my wizard with red robes I decided to forgo the schemes I'd found online and use red. Starting with a basecooat of Burnt Red, I layered on Red, Flat Red and a bit of Wild Rider Red until I was happy with it. I used thinned Black Red to add some shadows. I decided to stick with red for his sash/belt, using Dark Red and Red.

I wanted a strong contrast so I used Ivory for his head covering and other clothing. I shaded them with Grey Wash and used Off-White for the highlights. His staff, which I really should have painted before the Ivory, is Mahogany Brown and Flat Earth.

Joe's beard is Black Grey highlighted with Sombre Grey. The last detail was painting the band around his head Flat Earth and his sandals Chocolate Brown. 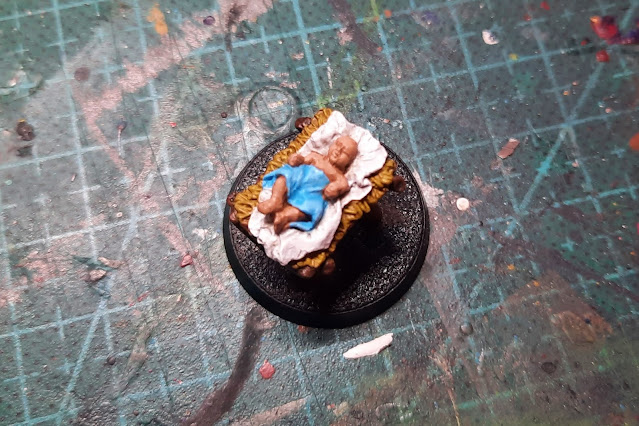 Next up was Jesus. He's a tiny figure in the middle of a crib, so I started by doing all the wood first with Burnt Umber, Mahogany and Flat Earth. I then gave the straw a basecoat of Japanese Uniform and a light drybrushing with Gold Brown.

Then I painted the small blanket covering his lower half Deep Sky Blue and Sky Blue, and the larger blanket under him Ivory shaded with Grey Wash and highlighted with White. He didn't take long and after a coat of varnish he was put on the windowsill with Joseph. 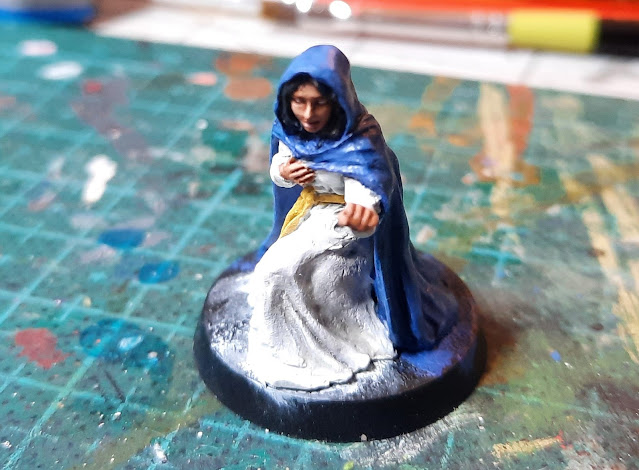 I started Mary thinking I'd do her cloak yellow, and gave it a basecoat of Gold Brown. But then Alicia pointed out that Mary is usually depicted with a blue cloak, so yay. I redid her with Game Colour Ultramarine as it covers really well and after using it to paint Maggie I really like the colour. I used Blue Tone to shade it and then added some white to the Ultramarine to highlight it. I wasn't as happy with the highlighting so I painted on another coat of Blue Tone to blend them in a bit.

Like Joseph, I painted her dress Ivory with Grey Wash shading and Off-White highlights. Her belt/sash is Gold Brown with Deep Yellow highlights. Her hair is Black with Sombre Grey.

As this trio is from the Middle Earth East, I had to do their skins a bit browner, so I used Heavy Skin Tone as a base, shaded it with Reikland Fleshsade and highlighted it by adding some of my own flesh tone mix to the Heavy Skin Tone.

Aaaaand now it's time to base them. I used a 45mm round base and covered it in Vallejo Mud & Grass paste to simulate straw, then sprayed it with white primer. I used Citadel Nazdreg Yellow contrast paint to get the straw look. 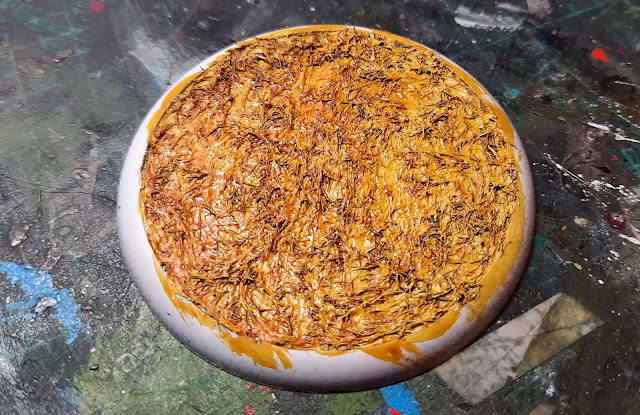 I had to thin it with water to get it into all the tiny crevices, which I failed to do in a few spots. After it dried I drybrushed it with Gold Brown, painted the rim black, then varnished the whole thing.

And then realised I'd have to paint Joseph's broccoli base (AARRGGHH!) with the same contrast paint to match the base. I'm only 49, there's plenty of time to get my act together. After test fitting them to the base, I whipped out the superglue and stuck them in place. I somehow overcame the desire to fill blank bits of the base with Citadel skulls.

Here's some photos of the finished Nativity lit by the crappy Star of Bethlehem that is our kitchen lighting: 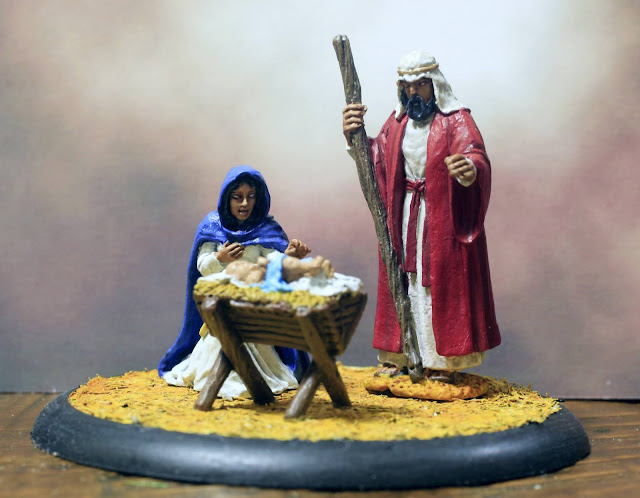 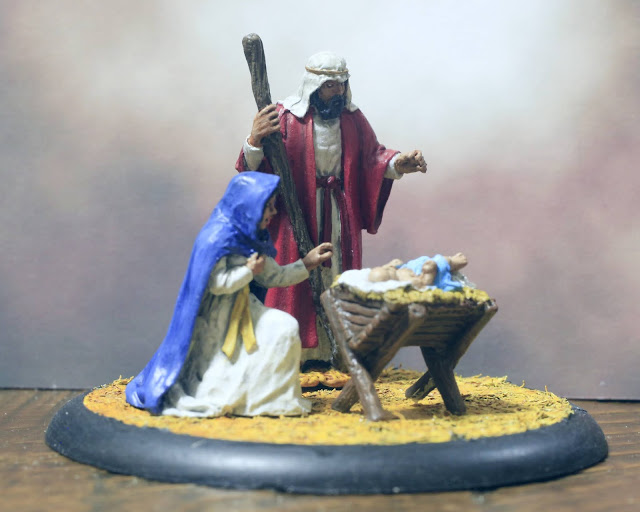 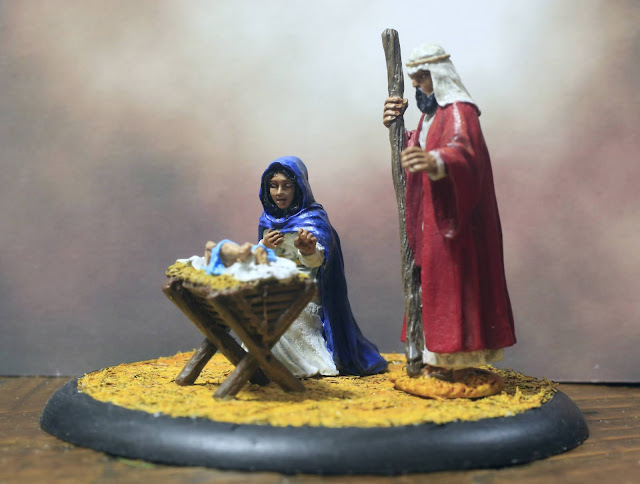 The set comes with a sort of "manger" that's basically a kind of A-frame with a star on top. I started to paint it but then gave up as I couldn't work out how it would fit on an existing base, and it's not really necessary.

The model has been boxed up and is currently on its way to California. It should arrive in one piece given the amount of bubble wrap I used, and hopefully Alicia's mum is happy with it.