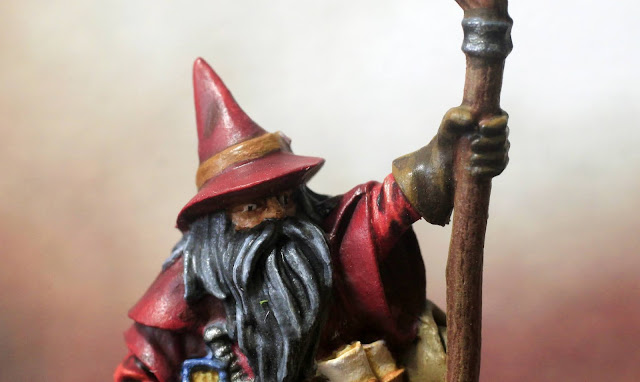 YOU SHALL NOT oh wait wrong wizard.

Luwin has been around for a while: he was a freebie that came with my first-ever Reaper order back in May 2018. He's had a long, lonely stay in the Magical Box of Unloved Lead, but cometh Mo'Vember, cometh the wizard, so he's finally been freed from his plastic prison. 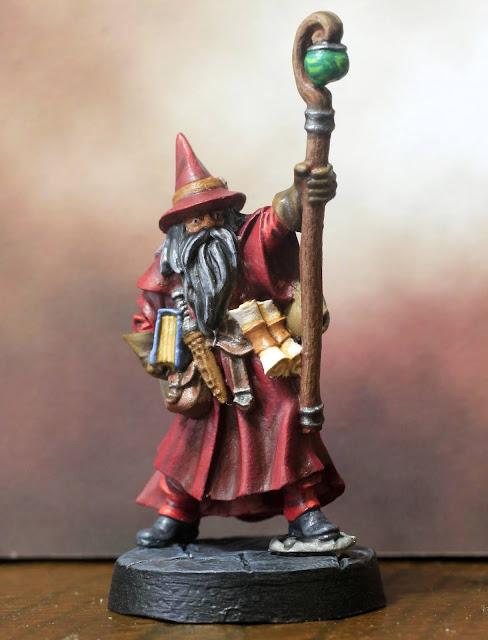 I did google around for some painted examples to get an idea of the colours people were using on Luwin, and also to nail down exactly what all the things hanging off his belt are. Most of the images online have him painted in purples or blues, so I went for dark red, starting with a coat of Black Red. Well, I say "a" coat, it was more like four. Black Red is one of the few Vallejo colours that doesn't cover too well, and painting it over white spray primer didn't help.

I was a bit stuck when it came to his sleeves and trousers, so I decided to keep the red theme going, only brighter, with Red, Flat Red and some Wild Rider Red. 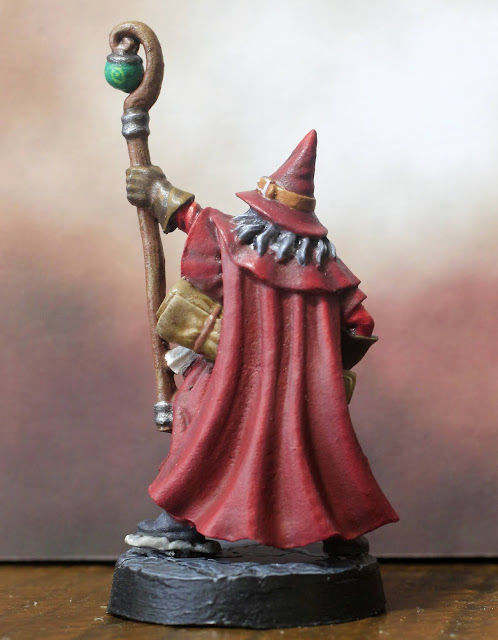 With the Black Red done I hit the non-cloak bits: Blue-Grey and Ivory for his book, Ash Grey and Flat Earth for the dagger, Chocolate Brown for his belt and gloves, and Ivory and Light Brown for the scrolls. He's got a blanket/bedroll under his cloak which was painted Forest Skin. His beard, the whole reason he's even being painted, was based with Neutral Grey and his face with my own skin mix.

Then I painted his boots Black Grey and his staff Japanese Uniform, which was a mistake as it's way too yellow so it was redone with Mahogany Brown. 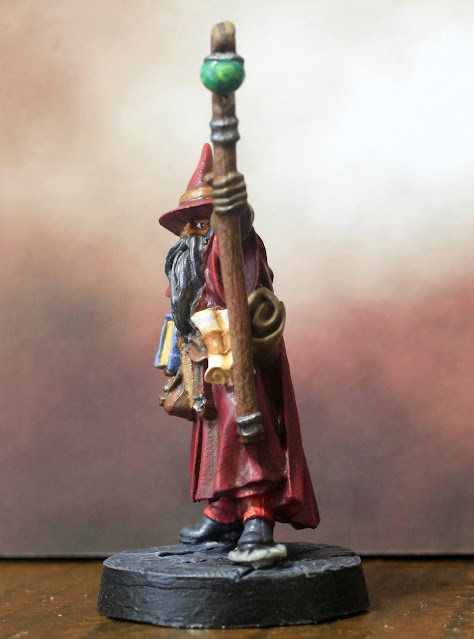 OK, that's all the base colours done, let's start on the highlighting. I used very thin Dark Red to layer on the highlights on his cloak and hat, and once I'd got it light enough I used thinned Flat Red for the final couple of layers. It looked really good, but then I had the fun and games of doing the fiddly bits without getting grey or black or brown on the red. Yay. 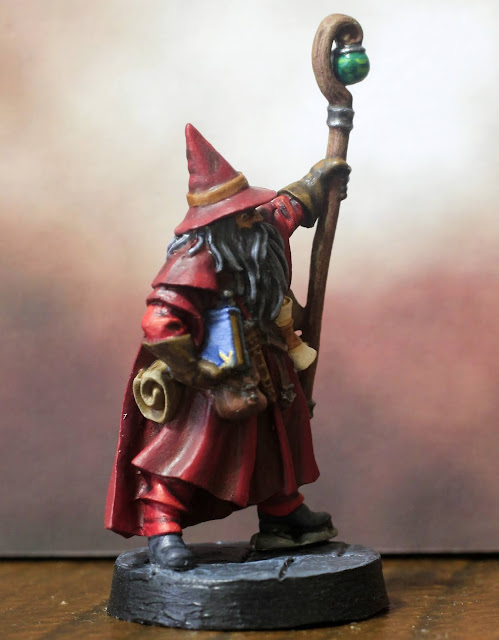 Oh God, now it's time to finish the details. Luwin has a lot of details. I'll spare you the, well, details (and there was much rejoicing) but they made the wizard into one of those figures you like, but at the same time can't wait to get done. Happily, despite his face being mostly hidden by his beard and hat, I managed to get his eyes first time.

One thing I am a bit proud of is the globe hanging off his staff; a better painter than me could easily have made it look like it was lit from inside and probably added some awesome OSL, but as it's me I painted it Park Flat Green and added some random lines with Scorpy Green. And it looks great!

The final thing was his base, and as I could not be arsed to make one, I used a resin flagstone base of a type I previously used on my Plague Nurse, Plague Doctor and Professor Froschmeister. It's painted Dark Grey and highlighted with a bit of Ash Grey.

So that's my second, and possibly last, Mo'Vember entry, unless I can find the plastic Reaper dwarf wizard I forgot about until yesterday. Is that it for challenges this year, or is there one in December? And the chariot is almost done, so expect a post on that soon!