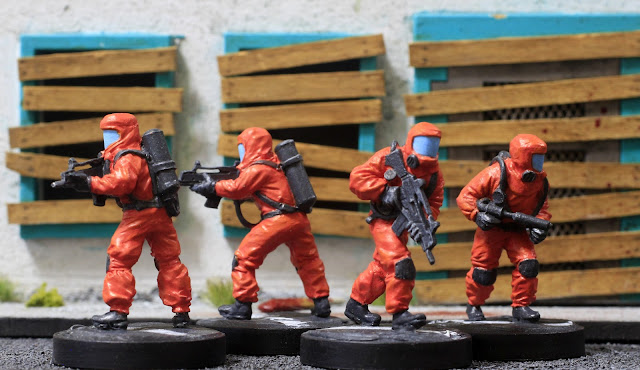 Hazmat Team Beta cautiously makes its way through a zombie-infested area in search of survivors. So far there's no sign of Team VHS.

Having a group of survivors/soldiers in hazmat gear is something I've wanted for ages. Unfortunately I didn't realise that "ages" would be extended by the six-week wait for these to arrive from Hasslefree. Still, as usual they're great scuplts marred only by the end of the flamethrower being bent 180 degrees and breaking off when I tried to straighten it.

Hasslefree also does a Hazmat Team Alpha, but all four figures in that one are armed with G36 rifles. I got Team Beta just to have a guy with a flamethrower. 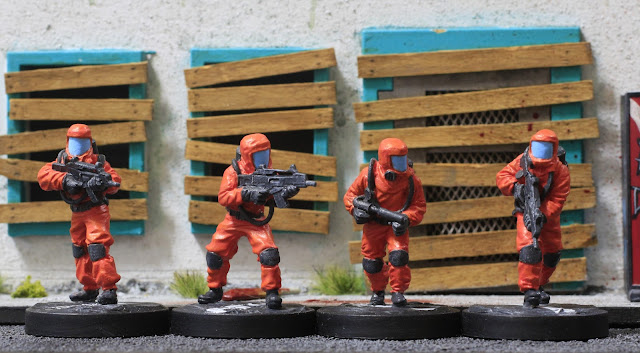 After googling "hazmat suit" it appears that they come in four basic flavours: bright green, white, yellow and orange. As I like orange I decided to go that route. The suits were given a basecoat of Heavy Orange and a topcoat of Wild Rider Red, highlighted with Rust as it was easier than mixing my own shade. The highlights are there, honest; you can barely see them in my as-per-usual crappily lit photos. 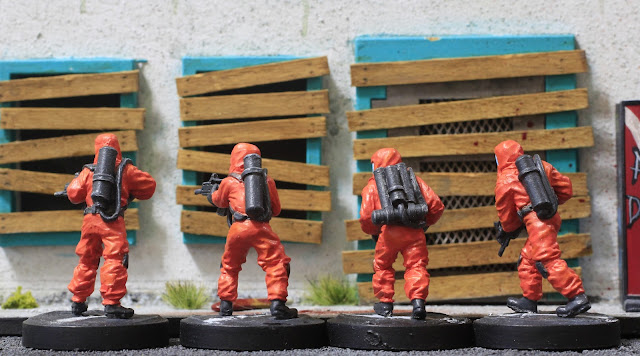 I wanted to keep the paint scheme simple so just did all the non-orange bits Black Grey and highlighted them with Neutral Grey. The final touch was painting their facemasks Deep Sky Blue with a bit of Sky Blue.

They were straightforward enough to paint, although the process wasn't helped by having to touch up where orange got on the grey and vice-versa. Another issue I had is one that crops up a lot: for some reason, Vallejo Black Grey (along with Black) tends to rub off incredibly easily, even after being given a coat of matte varnish. You can see in the top pic where it's come off the gun barrel on the left. I really wish I knew why this was, although it could be that I just got a dodgy pot.