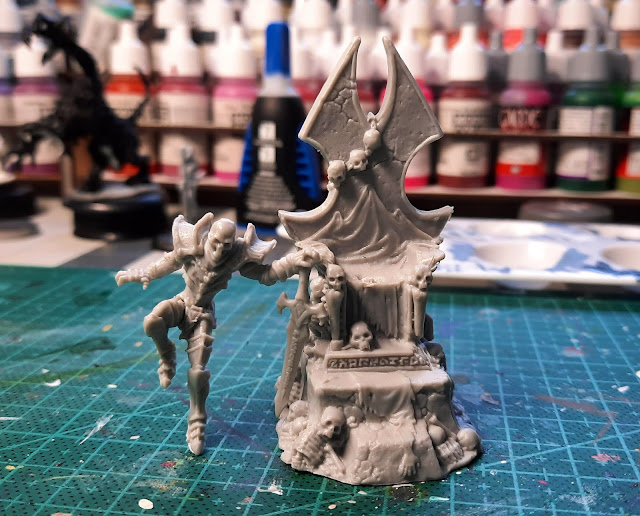 Dragoth the Defiler, Undead Lord, has just stepped on a Lego brick. And yes, that is my giant wererat on the left in the background, which shows how long this model's been sitting on my desk.

I painted Dragoth and his throne in between doing the Temple Dragon. Reaper has done four versions of Dragoth; this is the Bones version of the newest metal sculpt. I bought him at the same time I got my Dark Elf Queen on Throne. Unfortunately, unlike the queen, I forgot to take any work-in-progress photos... and there was much rejoicing. 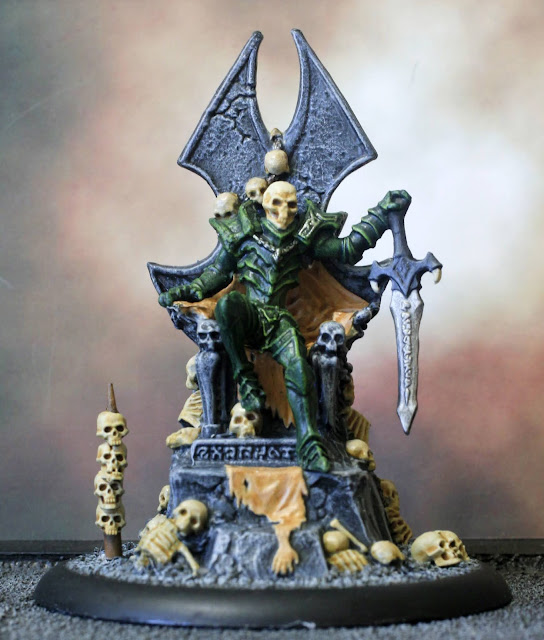 The metal version of this model has Dragoth's sword pointing inwards and resting on the plinth; for some reason Reaper decided that the Bones version would test his strength by having him casually dangle it over the side, which looks odd. It doesn't help that the sword is, almost inevitably, bent. I didn't even bother to try fixing it.

Like the Dark Elf Queen, I kicked off by doing his throne first, as it's way more involved than Draggers himself. Well, I say I kicked off with the throne, what I actually had to do first was remove Dragoth to make painting him and the chair easier. Yes, for some inexplicable reason Reaper decided to attach him to the throne, so using a small screwdriver I managed to pry him off without too much effort. 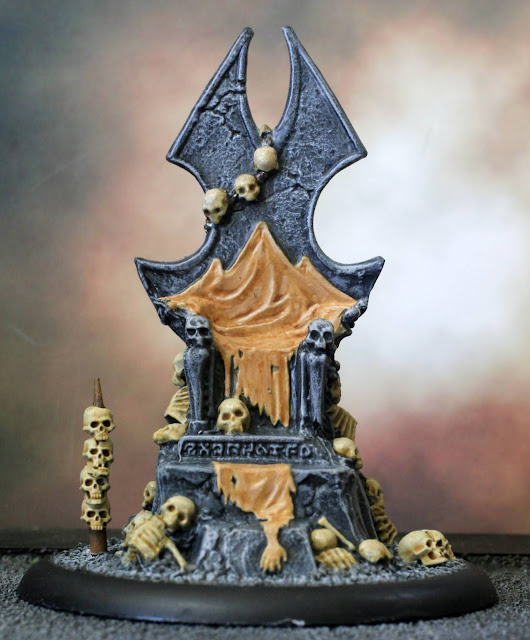 After being sprayed with black primer, the throne was plastered with Mechanicus Dark Grey as a basecoat and Grey Seer as a highlight. If either of you is wondering why I'm suddenly using Citadel paints, it's because my Vallejo Dark and Neutral greys are almost empty and I refuse to pay Amazon prices for something I used to be able to pick up for $3.50 a pot. So they're being replaced but my local game store only does Citadel paints, about which I'm not too best pleased.

Anyway, after a final highlight with Ghost Grey I gave the whole model a wash with Nuln Oil and left it to dry. 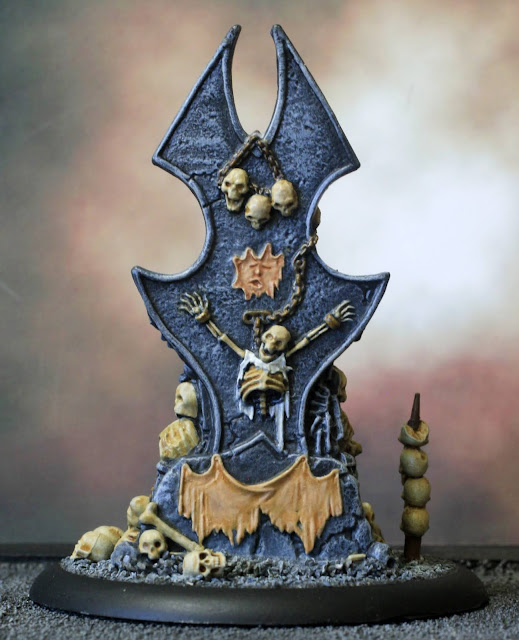 Ooo, details. Dragoth's throne is adorned with skulls, bones and flayed skin, so I started by painting all the bones with Reaper Aged Bone and washing them with Seraphim Sepia. The skins were painted with my own flesh mix and washed with Reikland Fleshsade, then I went back to the bones and highlighted then with Bonewhite. 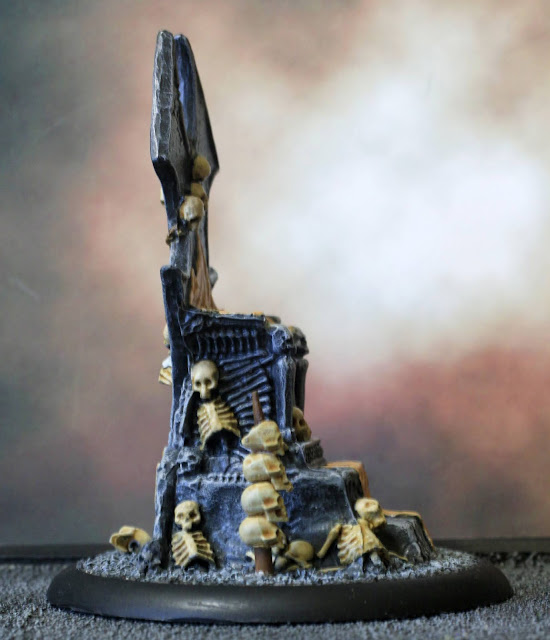 The skeleton manacled to the back of the throne is still wearing the ragged remains of a shirt, so I painted it Off-White. The skin was highlighed with a mix of my mix and some Basic Skin. Any bones that looked to be an integral part of the throne were left in stone colours. The chains were painted with Plate Metal, then washed with Nuln Oil and hit with Dry Rust and Rust effects paints. 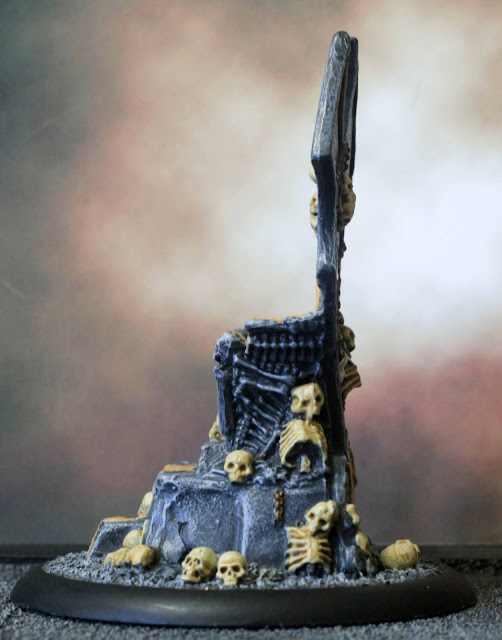 The throne was actually really straightforward to paint and didn't take too long. I've seen painted versions where the edging of the throne is gold or silver, and I did consider that but decided I like the monochrome look better. 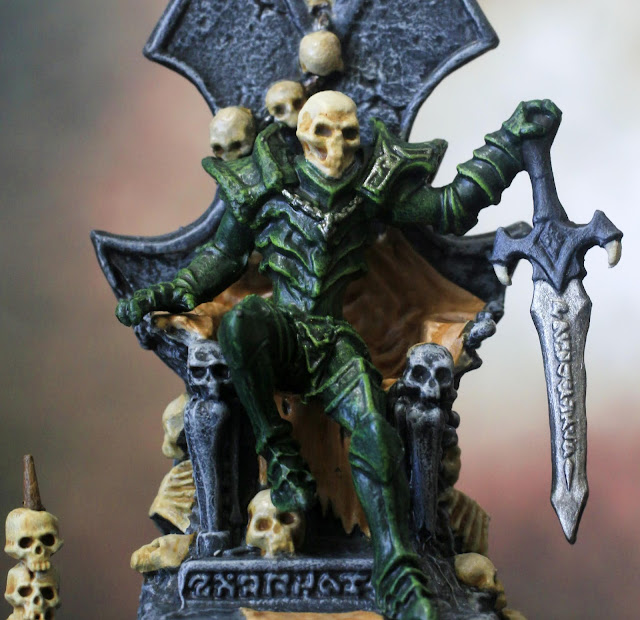 And now it's time for Dragoth himself. I have to admit to being done with reds and blues, and I guess silvery armour would be the standard, but I decided to go with greens because why not. Dragoth was also primed black, then basecoated with Heavy Black Green and washed with Nuln Oil. He got an overbrush with Goblin Green and a lighter drybrush with Scorpy Green, and there I stopped. I think the armour works in these colours; it's certainly different and has a bit of an ethereal quality to it (honest).

His head (helmet?) was done the same way but I didn't like it as much, so I repainted it to look like a regular skull, but it needs more shading around the nose. The final bit was his sword, which was just painted with Black Grey and Plate Metal. I drybrushed the hilt with Mechanicus Grey and painted the little teethy bits with Bonewhite.

I was in two minds about basing him but finally decided to go for it, using my last 60mm base. I superglued the throne to it, then painted the base black, painted PVA around the throne and covered it in the black sand I haven't used since my first Gug figure last year. 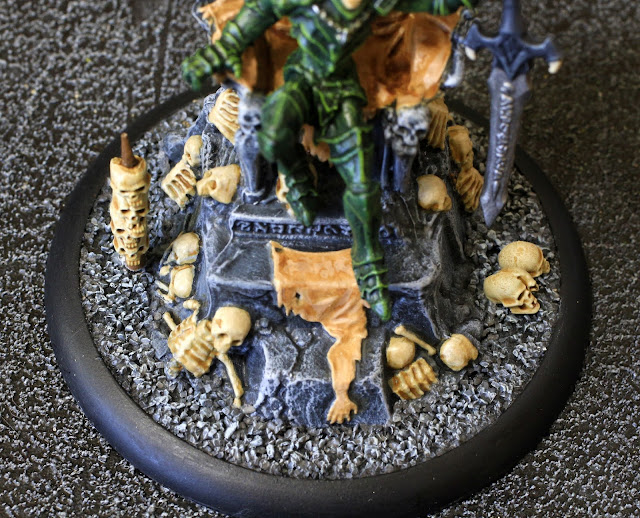 Remembering the problem I had with non-drying PVA when I did my Cultists of Hastur, I left the glue overnight to thoroughly dry and then used a large makeup brush to sweep off any loose bits of sand (yes I know this is basic practice, but it's me). I daubed it with matte varnish to seal the sand in place, then lightly drybrushed it with Grey Seer and Ghost Grey as I wanted a desolate setting. I added a couple of Citadel skulls to the left side and the back. 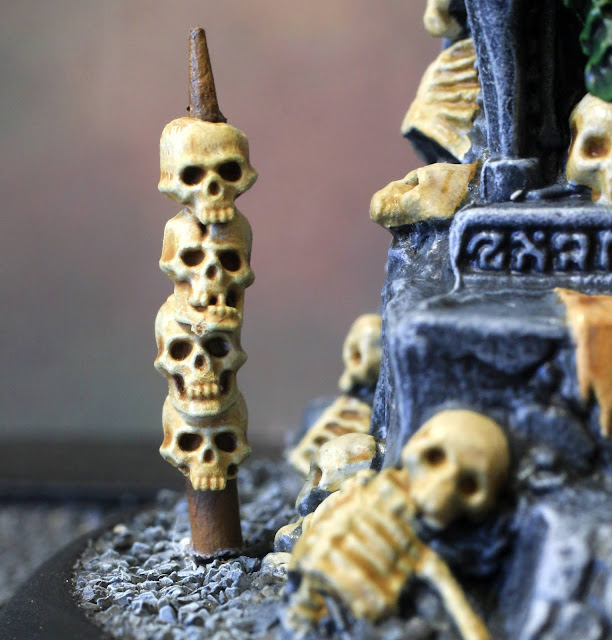 The right side of the base looked a bit empty. I glued four Citadel skulls together, then snipped the end off a toothpick and glued it to the top, and stuck a short piece of plastic rod to the bottom. After painting them bone and the "stake" Chocolate and Flat browns, I glued them to the base. The photo shows that it's not quite perfect, so I'll fill those tiny gaps with some plastic putty at some point.