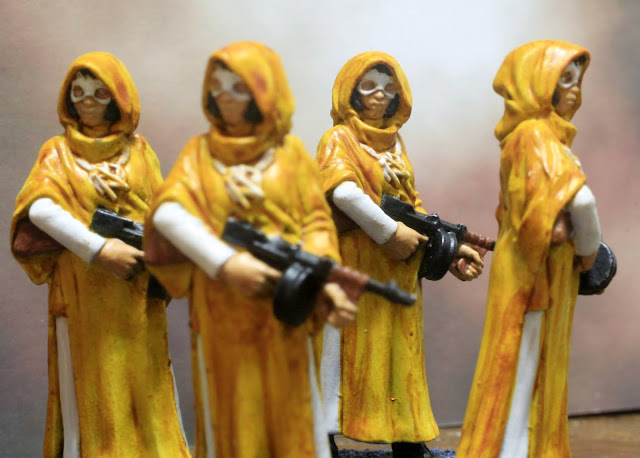 I gave up on these guys back at the end of Monster May(hem). I couldn't get Hastur painted right, so I didn't see the point of having a go at his merry band of followers. But then I decided to try something different... 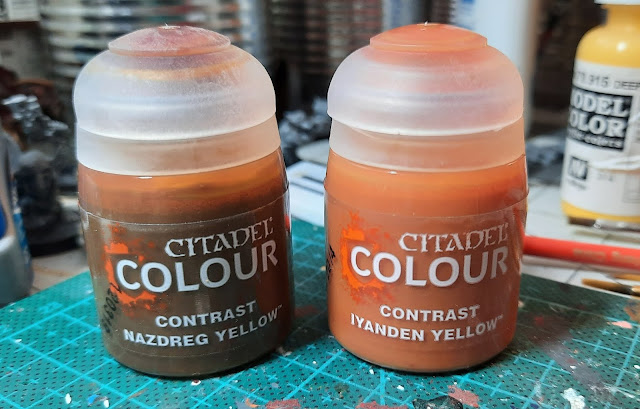 Here's the secret weapon: Citadel contrast paints. I picked these up last week while buying a new pot of Serpahim Sepia to finish my Warhammer chariot. I've never used contrast paint before but I have watched a few tutorial videos on them and they look straightforward to use (famous last words). 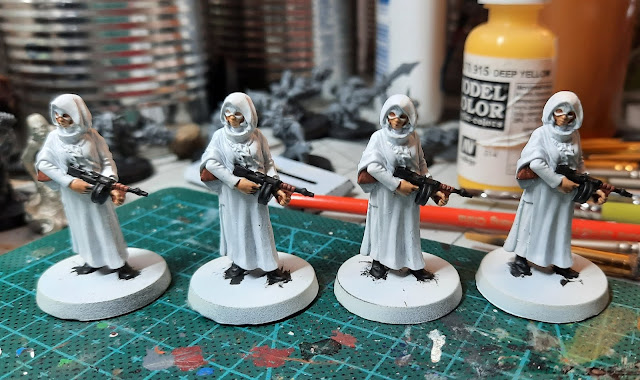 I've read that contrast paints need to go over a smooth, even primer, so the cultists were stripped back to bare plastic and resprayed with white primer. I painted their skin, Tommy guns and shoes before tackling the yellow; as contrast paints are transparent, any specks of black or brown would show through.

I bought Nazdreg and Iyanden yellows to give me a choice, and I decided to use Nazdreg as it's a bit darker. I don't know if I'm supposed to thin the paint, so I just picked up a size 3 brush, dipped it in the pot, took a deep breath and got to painting. 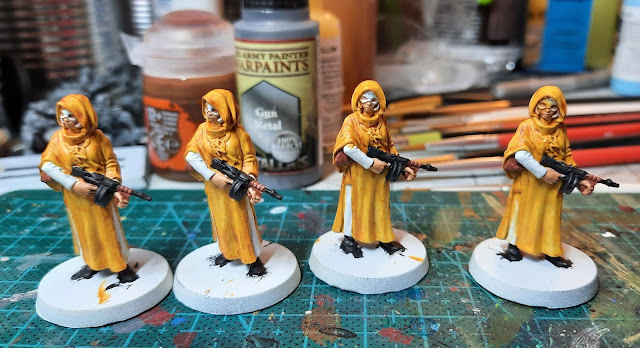 Well, it went a lot easier than I thought. The contrast paint covers really well, but I could not work out how to prevent it streaking. I had to switch to a 4/0 brush to do smaller bits like the front of their necks, but it probably took me just 10 minutes to paint the robes on all four cultists. 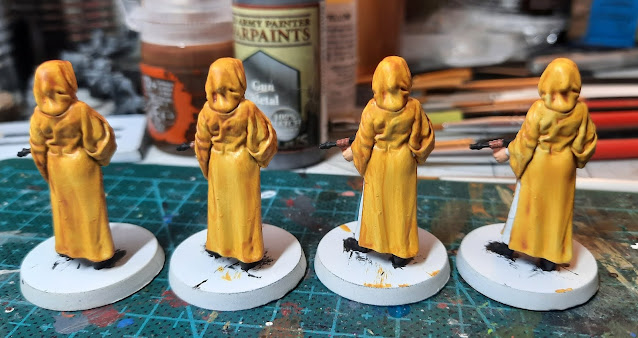 One thing I forgot to do was use a dry brush to lift off excess paint to prevent it pooling... whoops. And you can see the streaking on the back on the figure second from right. It's annoying, and I don't know what to do about it as painting more contrast paint won't hide them. I decided to leave them as is just because I'm happy to finally get the yellow done.

I had to touch up the yellow here and there, and had a near-disaster when on figure's paint came off while I was varnishing it. I repainted those spots, and then touched up the white robes and masks. The final thing was to paint their necklaces white to tie it in with the colour scheme and because I didn't want to risk getting a dark colour on the yellow. After several attempts at doing their eyes, I just gave up.
Their bases are sand, painted Sombre Grey and highlighted with Blue-Grey. For some reason, despite leaving the PVA to dry for three hours a lot of the sand came off while I was painting them. Not only that, more contrast paint rubbed off while I was holding them to paint the base rims, so I had to touch it up again and give them a second coat of varnish. And I thought Cthulhu's cultists were a pain in the arse...
So with this success, I'm planning on getting Hastur finished before the end of the year. I'm not sure how I'll do it because his tentacles are done and he's got several coats of Daemonic Yellow on his body, so I don't know whether I'll strip the paint, respray the whole model white or just see what the contrast paint looks like over the existing yellow. Stay tuned!
Labels: cmon, cultist, games, horror, lovecraft