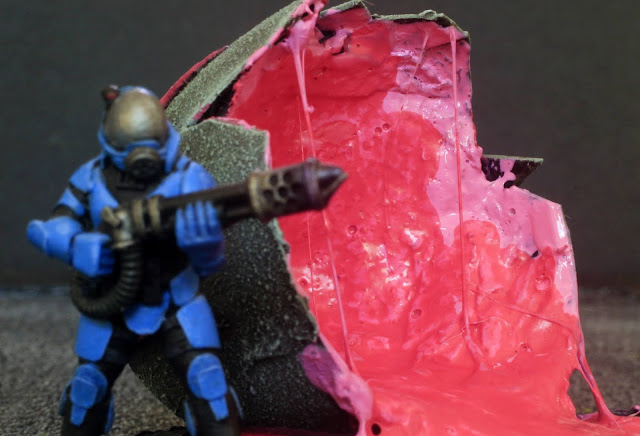 I missed the Season of Scenery deadline by 48 hours, which is an improvement over last year when I missed it by around 368 days. As per usual with this build I was waiting for goop to dry. You're going to have to once again excuse the photos; I was trying for an eerie vibe but it turns out that switching to f30 and underexposing doesn't really do the job. 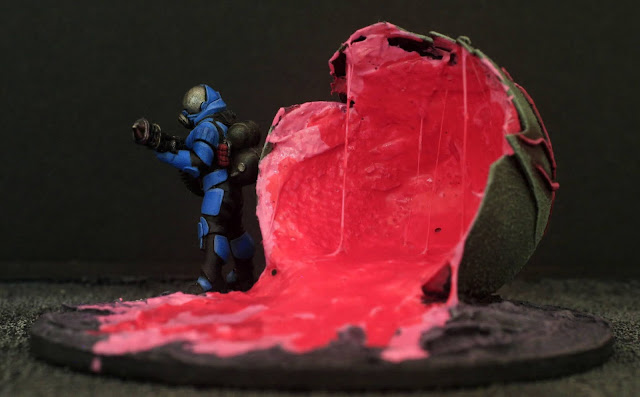 For the second load of gunk, instead of using the Secret Weapon Realistic Water, which takes 24 hours to dry, I mixed Pink with some gloss Mod Podge and dumped it into the egg. After letting it settle for five minutes I tilted the base back to let the mix flow out over the insides, then forward to let it pour out over the base. After getting the look I was after, I put it under a plastic box to dry.

After a few hours it was still slightly tacky, but I moved on to the next stage. One thing I thought it needed was a second colour so it wouldn't just be bright pink. I decided on Wizard's Robe as a suitable look for the yolk, mixed it with more Mod Podge, repeated the whole pouring/tipping thing and left it to dry again.

The stringy bits proved to be a bit of an issue. Neither the Realistic Water nor the Mod Podge are thick enough to be of use, and tacky PVA didn't work. I was at a bit of a loss until I remembered the small tubes of E6000 glue I picked up from Michaels a couple of years ago when they were on sale. It's very thick and stringy, and frankly pretty useless for sticking minis or scenery together, so I used a toothpick to string it between the top and bottom of the egg's inside and from the edge of the shell to the base, and then painted them with Pink and Wizard's Robe. It worked really well. 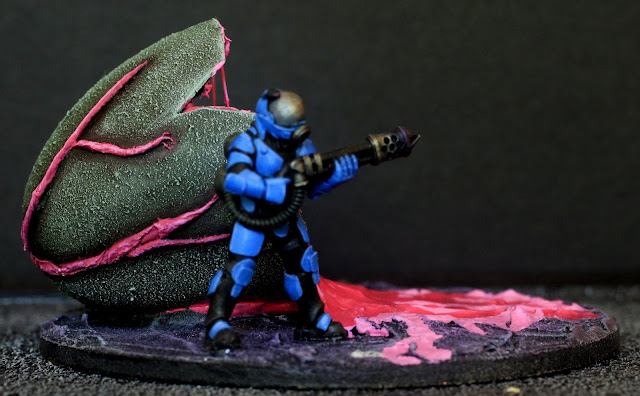 I know this is a scenery challenge, but I wanted to add a figure to the base to give an idea of scale, add another element, and fill a bit of empty base. The mini is a "female with flamethrower" from RBJ Games' S.T.A.R. Troopers Heroes and Specialists set. It was a freebie that came with an order I made a couple of years ago. She was painted up last year and I've been wondering what to do with her. 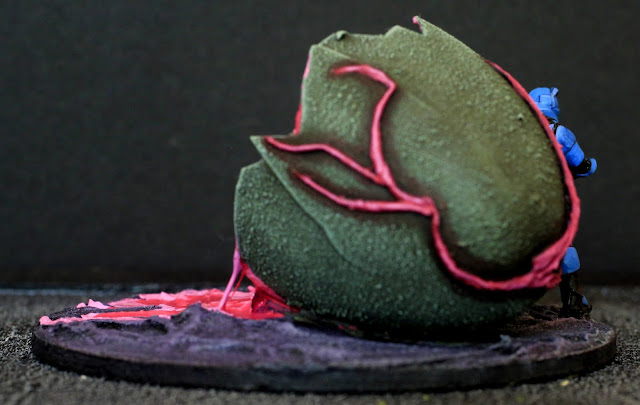 I took Dave's advice and daubed Red Tone around the veins to make it look like blood or nutrients were being delivered to the egg. It worked really well. I did a second highlight of Pink on the veins to lighten them a bit, and gave the whole shell another once-over with a mix of homemade black and green washes. 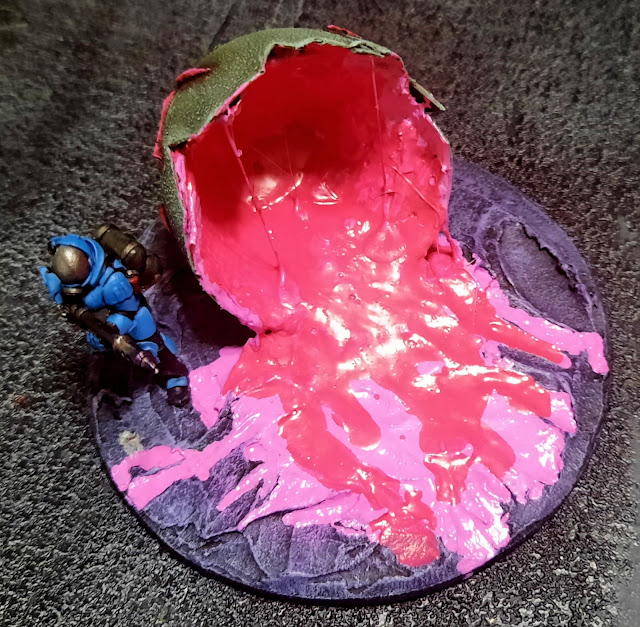 After gluing the mini to the base it was done, and I'm left wondering why I made it LOL! I mean, it looks good, it worked better than I thought it would, and it was interesting to use water effects for the first time. But overall my time would have been better spent making scenery suitable for zombie apocalypse or 40k. Still, I built it and although it could have been better — the dark and light pinks don't look like they belong in the same room, let alone the same egg — I think I did OK.

Anyone out there play Kill Team?

We were at Gamer's Grotto in Bennington yesterday and they're getting back into hosting 40k games, and when the owner found out I'd played back in Rogue Trader days he invited me along. He also recommended Kill Team after I told him I hadn't played in 30 years and don't really want to have to shell out hundreds on an army. So, I've been looking into Kill Team but I'm finding it utterly confusing as to what I need, except that I can play it with five minis. I've got enough Space Marines and Chaos Space Marine bits to build a team, and Dark Eldar Drukhari look interesting, but can anyone offer any advice?