Meet a couple of the monsters kicking around my display cabinet. 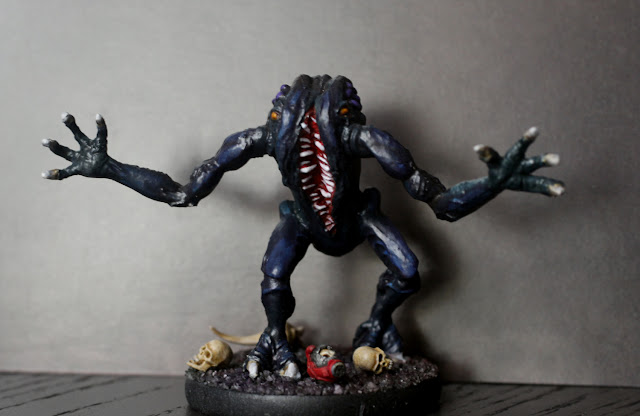 Gugs are another creation of HP Lovecraft, who also invented these. Gugs appear in one story, "The Dream-Quest of Unknown Kadath":


It was a paw, fully two feet and a half across, and equipped with formidable talons. After it came another paw, and after that a great black-furred arm to which both of the paws were attached by short forearms. Then two pink eyes shone, and the head of the awakened gug sentry, large as a barrel, wabbled into view. The eyes jutted two inches from each side, shaded by bony protuberances overgrown with coarse hairs. But the head was chiefly terrible because of the mouth. That mouth had great yellow fangs and ran from the top to the bottom of the head, opening vertically instead of horizontally.

I picked up gug at my FLGS, Brookhurst Hobbies, about year ago. I had an idea for a colour scheme that would look really good: blue, purple and bone. So I started to paint him up and then, about halfway through, realised he looked like a sodding genestealer. Ugh.

Gug was banished to the Magical Box of Unloved Lead and a few months later I decided to give him another go. I basecoated him with Citadel Abbadon Black with the intention of adding another coat of black, but then changed my mind and used Vallejo Dark Sea Blue as a base shade which was slathered randomly with Army Painter Red, Blue, Purple and Green tones.

His mouth is Black Red and Red with Off-White teeth. The teeth looked like they would be a doddle to paint, but then again if I had 50p for every time I thought "That looks like it'll be a doddle to paint" I'd have about a million quid. After much touching up I realised it was about as good as it was going to get, so I left it. His eyes are Red with a dab of Transparent Yellow to give them a bit of life, and the claws are Army Painter Skeleton Bone shaded with Strong Tone.

Highlighting was a bugger as I wanted the gug to have a dark colour scheme, so I used more coats of ink as just about anything is lighter than Dark Sea Blue. I did use some Dark Prussian Blue on the legs and left the claws as they were. 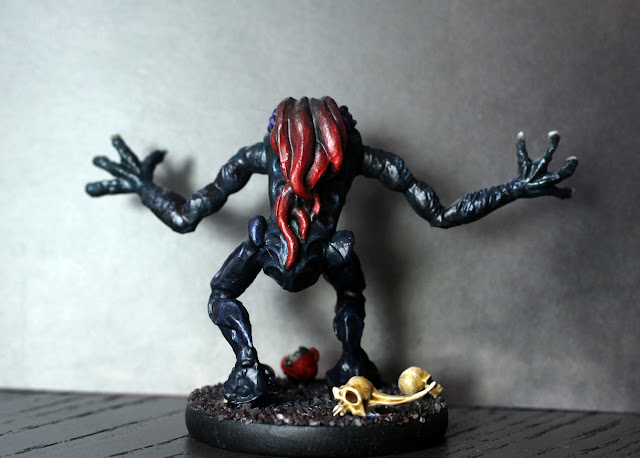 Here's Gug from the back. He looks like he's about to burst through the paper background leaving a Gug-shaped hole, a la Looney Tunes. I painted his hair/tentacles/Predator-style dreadlocks with successive layers of Vallejo Red to build up the colour and provide a smooth transition from the dark blue.

As you can see, my gug has only two forearms, because I thought four looked stupid. As this is a Reaper Bones plastic figure it was easy enough to cut off the extra forearms and trim the cut bits. 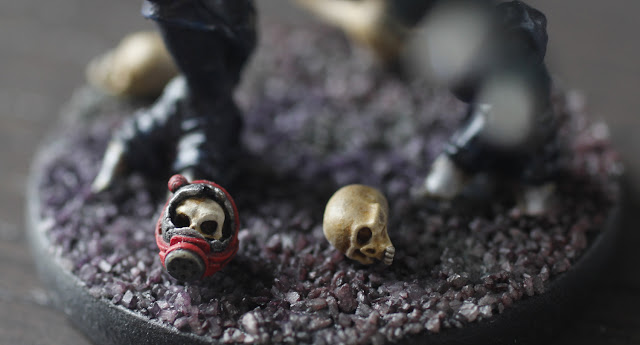 The base is a 1½-inch wooden disc from Michael's, painted black and given a coat of tacky glue. It was then covered in black gravel I got at the local dollar store. Once dry, the gravel was plastered with Army Painter Purple Tone ink. After several coats I got the effect I wanted.

It was then just a case of decorating the base. The helmeted skull is by RBJ Games and was bought specifically for this base. It is awesome. The others are from Citadel's box o' skulls. 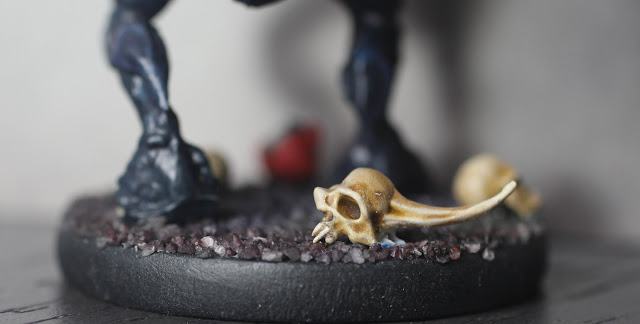 Yes, that is a plaguebearer skull. 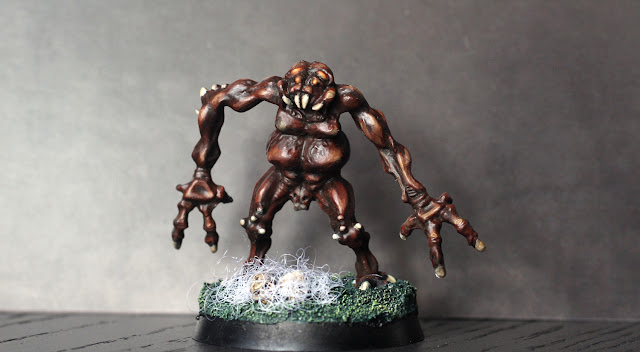 I bought Attercop just after Thanksgiving. I was bugged because I recognised its name from somewhere, and it wasn't until I was about to start painting it that I remembered I'd read the name in The Hobbit. That's when it dawned on me that Attercop is a man-sized bipedal spider. Yuck.

Still, on with the painting. As I'm scared of spiders there was no way I was going to goole images for colour schemes, so I went for a red-brown look. It's basecoated in Vallejo Cavalry Brown and given a thorough coating with Vallejo Sepia Wash. Once that dried I started on the highlighting, layering on Cavalry Brown, then Cavalry Brown mixed with Light Orange, then just a few layers of pure Light Orange.

Attercop's bony protuberances are Army Painter Skeleton Bone highlighted with Vallejo Off-White. Its eyes are Vallejo Red with a few coats of Transparent Yellow to give them a slight glow. 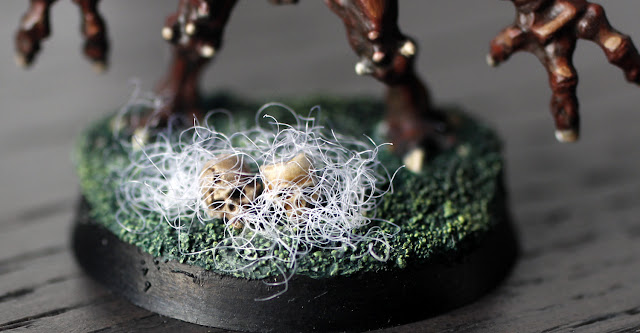 I added a couple of Citadel skulls to fill space. To get the full spider effect I decided to cover them in some webbing. Inspiration hit when I realised that the stuffing from a dog toy would work. Thanks to Erebus ripping up her toys on an hourly basis, we have an abundance of stuffing on the floor of every room in our apartment so it was a case of gently supergluing some in place. I'm not sure if it worked, but it's too late now.
Labels: army painter, basing, citadel, horror, lovecraft, magical box of unloved lead, monster, rbj games, reaper, vallejo