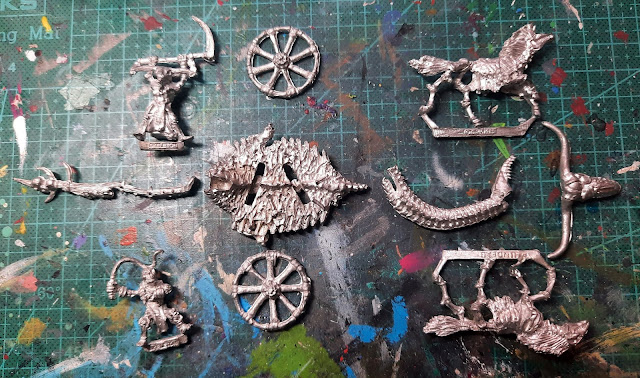 Way back in January I mentioned how much I wanted to make and build this chariot, and almost a year later I've finally made a start. It's just occurred to me that doing it for Zombtober would have been a good idea, but this is me we're talking about.

According to this old White Dwarf page, the chariot, horses and riders were sculpted by Aly Morrison and the Citadel Design Team. I got it on Ebay about a year ago (we were living in Vermont but hadn't bought our house, so I'm guessing October).

This metal masterpiece cost me $100. I justified the expenditure to myself on the grounds that:

iii) As $100 will just about get you a plastic Space Marine Chaplain, Harlequin Death Jester and Necron Cryptek, it's pretty good value for a model that's metal, is a classic Citadel sculpt, and has been out of production for almost 40 years.

After doing a bit more googling, it turns out I don't actually have all the bits. There's supposed to be four more figures, as can be seen from an advert that appeared in White Dwarf 94:

I have the Charioteer and Longhorn, but I'm missing Morbius, Screamer, Reaper and Hell Blade. I'm not too bothered about this as I didn't know the chariot came with six minis until googling it last week. I could go looking on Ebay for the missing minis, but I have a feeling they're going to be expensive so I'll leave them alone... for now. 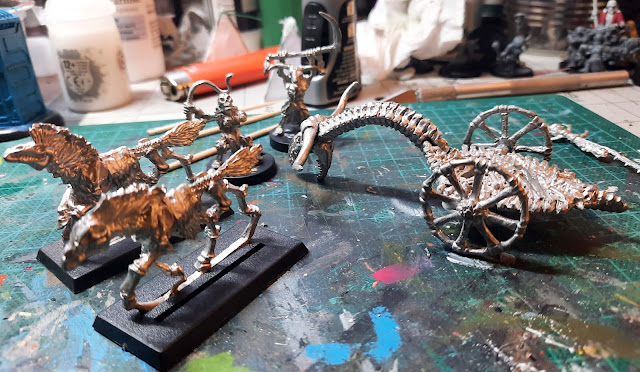 The chariot was cleaned up and glued together, and it went together easier than I thought it would. I had to use some filler where the skull joins the neck and the neck joins the body, and Vallejo Plastic Putty did the job really well. The horses are just slotted into their bases without glue for now so they'll be easier to paint. Both Longhorn and the charioteer had their tabs snipped off and were stuck to temporary bases. 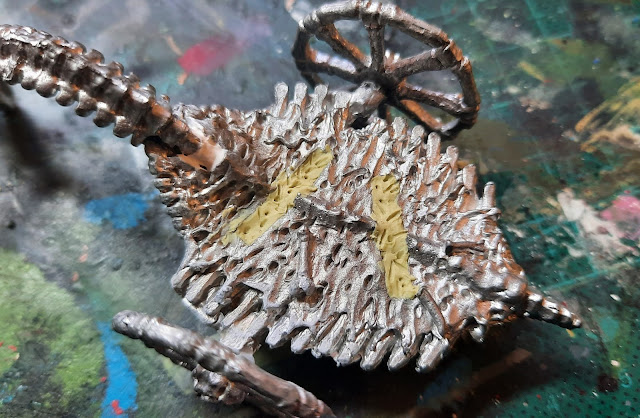 As I'd cut the slotta tabs off my minis, I had to fill the slots with something. I used Milliput because my greenstuff is still AWOL; it's not like I've chucked it out, it's somewhere on my desk. But as my desk looks like an explosion in a hobby store right now, I just decided to save time. I textured the Milliput using a pointed sculpting tool to try to match it to the metal as much as possible. Hopefully it won't be too easy to see these patches once it's all painted and the minis are standing on it.

The chariot and horses were taken to the garage to be sprayed with white primer, and so to at least make a start I got on with painting the figures. Sorry about the slightly blurry phone pictures: 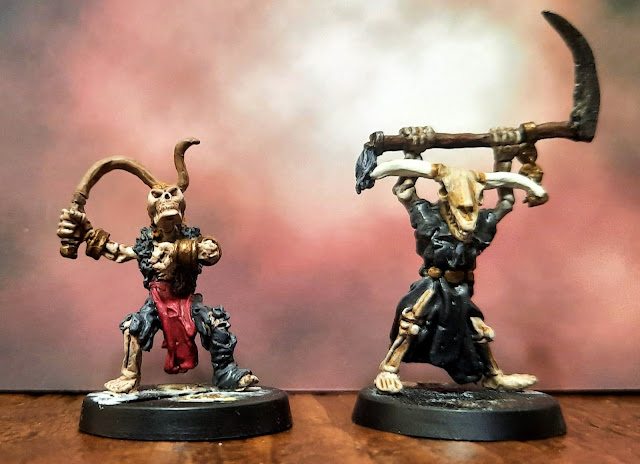 The Charioteer is on the left and, somewhat unsurprisingly, Longhorn is on the right. 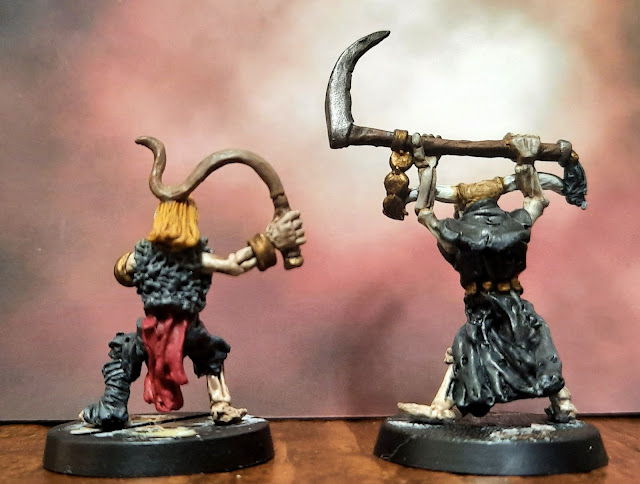 Here's an interesting fact: I hate painting bone. I said years back that I had a list of colours I really didn't like painting, which included white, purple, blue, yellow, brown and some others. I've got the hang of most of those but bone is one I still struggle with. I based all the skeletal bits with Reaper Aged Bone, shaded them with thinned Brown Wash and then went over them with thinned Bonewhite. I think it worked pretty well, and I wasn't too worried about exactly matching both minis' bone tones.

Both were primed white then their clothes were painted Black Grey. Longhorn's horns are Ivory and Off-White, and Bronze worked for his belt. His scythe has a Plate Metal blade and Burnt Umber and Mahogany Brown haft.

I decided to add some colour to the Charioteer by doing his tabard(?) in Dark Red and his flowing mane Gold Brown and Deep Yellow. His bracelets are Bronze, and the whip is Mahogany Brown for the handle and Forest Flesh for the whip bit. It could do with being a bit lighter.

So that's as far as I've got with the chariot. It's primed and ready to be painted, and it also has to be based properly, which should be fun. I'm hoping to get it finished this month in between doing my Mo'Vember entries.