I bought this bushy-bearded Reaper mini off Amazon last year, and if you're thinking "I bet he got it to get free shipping" you'd be right. At the time I didn't know Mo'Vember existed, so he's come in handy for this month's challenge. I've named him Hywel Rhysson and he's the first dwarf I've ever painted.

I got his name by combining two of my favourite dwarfs from Terry Pratchett's Discworld series. Hywel is the playwright in Wyrd Sisters and Rhysson comes from Rhys Rhysson, the Low King of the Dwarfs in The Fifth Elephant, Thud!, and Raising Steam. It's also because Hywel and Rhys are both Welsh names. It's always nice to have a touch of home in your hobby.

Reaper's released six Dark Dwarfs — a Cleaver, a Priest, a Striker, a Smiter, an Enlarged Smiter, and the Pounder — and they're all good sculpts. Thankfully they're made from the newer grey plastic, so no bent bits on this guy! 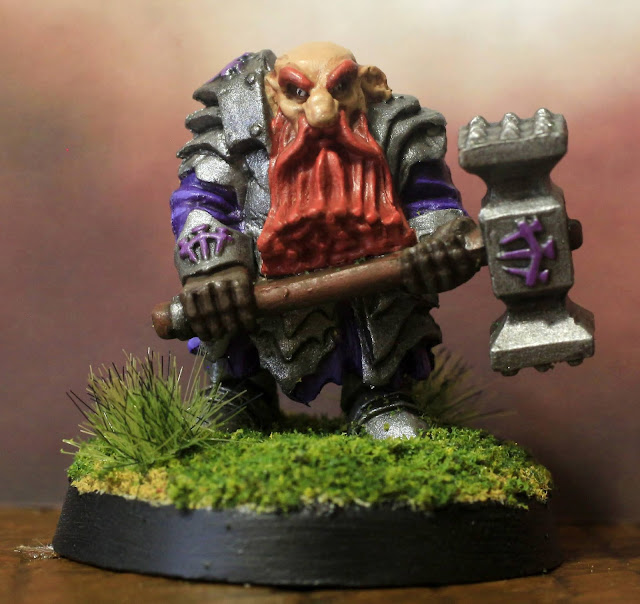 After being sprayed with grey primer I painted all his cloth bits with Violet. I'm not entirely sure why I picked it, but it's a colour I don't use too often and I thought it would make a change from the usual red/blue/green clothing, and it goes with the "dark" theme. After it dried I gave it a wash with Druchii Violet, a highlight with Blue Violet, and another Druchii Violet wash.

All of Hywel's armour was painted with Plate Metal and washed with Nuln Oil. It was given a basic highlight with more Plate Metal and a touch of Silver. The emblems on his shoulders, gauntlets and axe were done with Purple to make them show up better and tie in with his clothes. His gloves are Chocolate and Mahogany browns, with a touch of Bonewhite for highlighting. 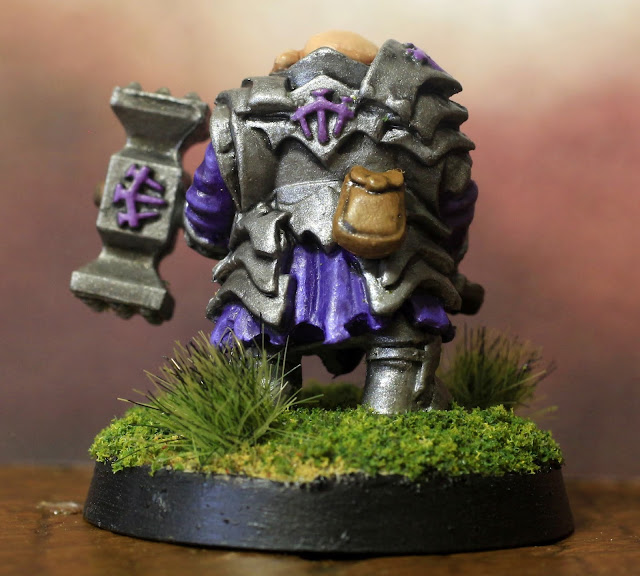 Next up was his beard. I didn't want to do black so or brown, so I went for red just to add another colour. Cavalry Red is my usual go-to for red hair, and once shaded with Brown Wash I used Wild Rider Red to highlight it. About 20 minutes later I realised it would be a good idea to paint his eyebrows too, so they were done in the same way.

The final bit was his face, using my skin tone mix and some Flesh Wash.

Hywel is on a small integral base (YUCK!) moulded to look like cobblestones, so I stuck him on a 32mm base and used Milliput to get everything level. I thought about making lines in the putty to replicate the cobblestone look, had a quiet chuckle, and just left it. After leaving it overnight to dry, I covered the base with PVA, two types of flock and a couple of small tufts. I can safely say that it isn't my best base.

So that's one entry for Mo'Vember, and I have a second hirsute figure in the works. Whether I manage more than two depends on getting more bearded minis before the end of the month, so we'll see.