Apocalypse Me: An in-tents experience 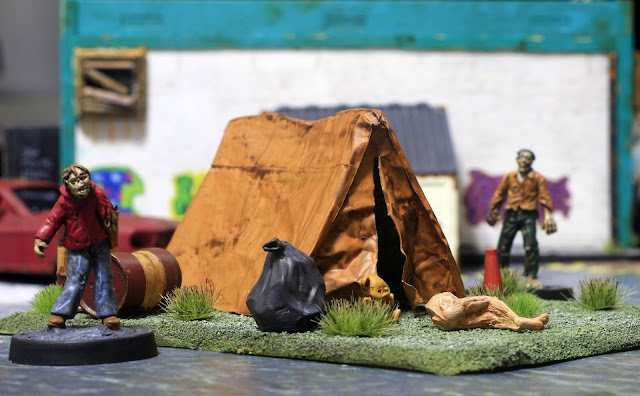 A couple of zombies stagger past an abandoned tent on a patch of wasteground behind the inevitable convenience store. The decomposing body of its owner lies outside, oblivious to the shambling undead.

I'm indebted to Dave over at Wargamesculptors Blog for the inspiration behind this little project. Back in early October, Dave posted about sculpting some tents for his scenery range, and that gave me the idea to do a tent of my own. Please note that Dave made a modern dome tent out of greenstuff with astonishing attention to detail, whereas I'm going to do something more in line with my skill levels. 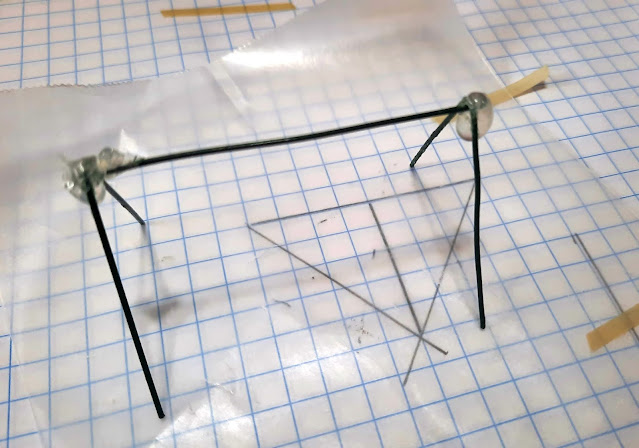 Instead of a nice modern dome tent, I went for an old (or oldish) A-frame like the ones I used to go camping in the Forest of Dean. Fun facts: one time me and my best mate Gareth went camping there, I parked my car in front of the tent opening. We were on a slope, and let's just say that if the handbrake on my 1983 VW Polo had failed you wouldn't be reading this. On another expedition into the wilds of Gloucestershire my mum gave us £20 for food, which we spent on one (1) pack of Rich Tea biscuits, one (1) pack of Marlboro cigarettes, and twenty-four (24) cans of lager. Oh, those teenage years.

Anyway, I used floral wire to make the tent frame and used graph paper to get the diagonal bits the same. Floral wire is cheap (I think it was $3 for 20 18-inch lengths in Walmart) and is pretty strong. Once the two end pieces were bent into shape, I measured the top bit, cut it, and glued it all together with two large blobs of hot glue. 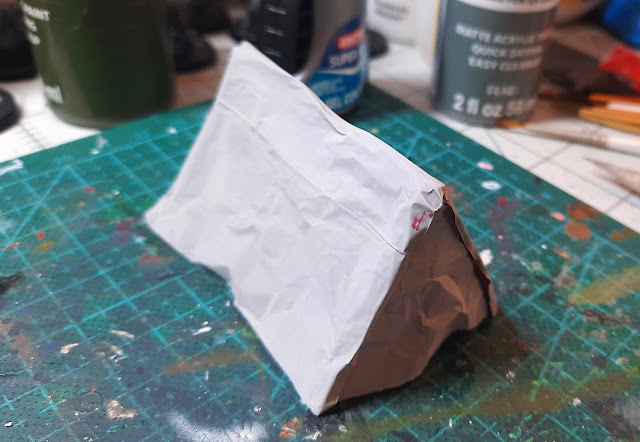 Then came the big question: what to use for the actual tent material? I tried paper towel soaked in thinned PVA, but it disintegrated. I thought about giving it another go, but then another idea occurred: why not use aluminium foil? I cut two triangles and superglued them to the A bits, and then cut a larger piece, folded it in half, and glued it to the top piece of wire. I had to snip off some of the dried hot glue to get a better fit, but it worked. The pic above was taken after I'd sprayed it with grey primer. 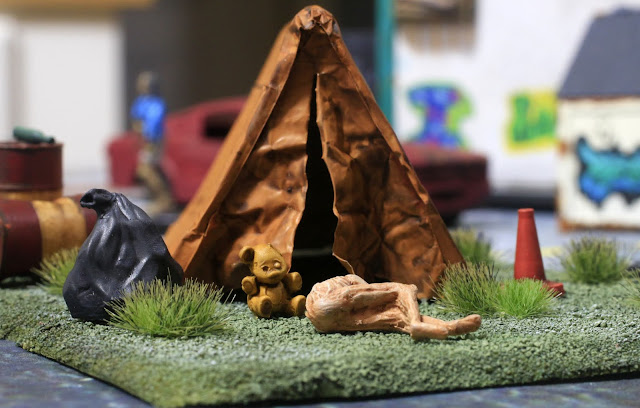 OK, so I missed taking photos of the next few steps, so here's a bunch of pictures of the finished tent and base. I painted the tent Orange Brown and gave it a coat of thinned Nuln Oil, which made it look dirty but to be honest looks what it is: brushed on. Oh well, I guess it can be explained away as rain streaks. I gave the outside a quick drybrush with Light Brown and then cut a slit in one end to mimic the tent's opening, bent the corners out a bit, and painted their insides Orange Brown to match the exterior. 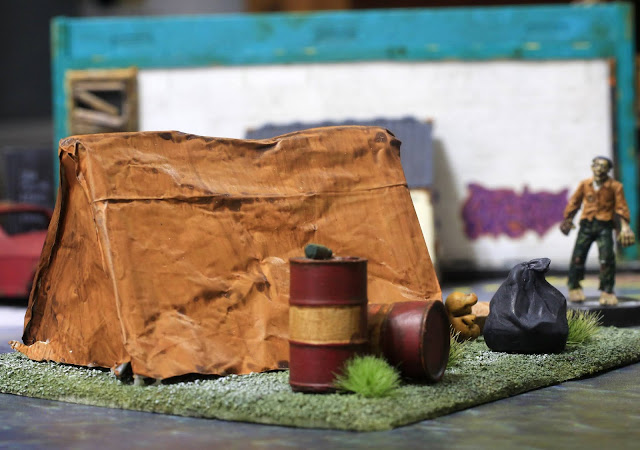 With the tent done, I moved on to the base and other bits. The base itself is just foamboard covered in sand and painted with the same cheap craft paints I used for my billboard, Marshy Green and English Ivy. I daubed random areas of it with homemade black and green washes, then drybrushed it with a mix of English Ivy and Granite Grey, another craft paint. 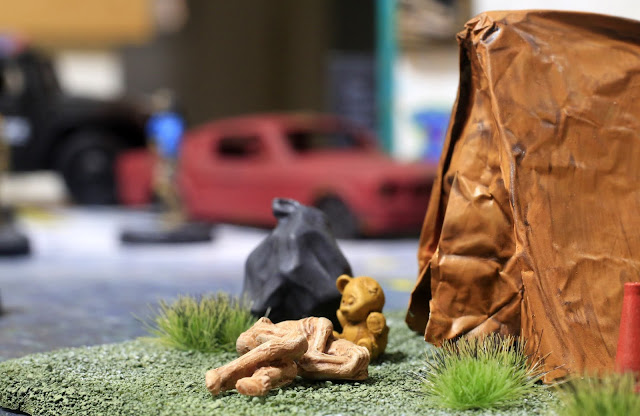 Once the base dried I glued the tent in place, then added the scenic bits. The oil drums are ones I painted about three years ago and appear on my blog's header image; I just ripped them off their base to use them with the tent. In a happy accident they match the one on the base of my billboard. 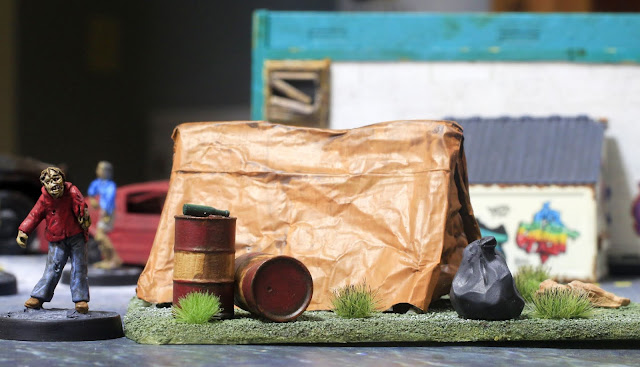 The traffic cone and teddy bear are by TTCombat and I found another corpse from the set I bought in 2018 to give the scene a macabre touch. A few random tufts and it was done. I'm pleasantly surprised at how it came out. The foil really works as canvas and it was easy to get folds and creases to make it look more realistic. The whole ensemble has an abandoned and despairing look about it, and the forlorn teddy bear adds another level of horror.

So that's the end of Zombtober and Apocalypse Me, and I had a great time making and painting entries for them. Mo'Vember is kicking has kicked off, so I'm scrabbling around to find a figure with a beard. I have a beard, but unfortunately I'm the wrong scale for this challenge.