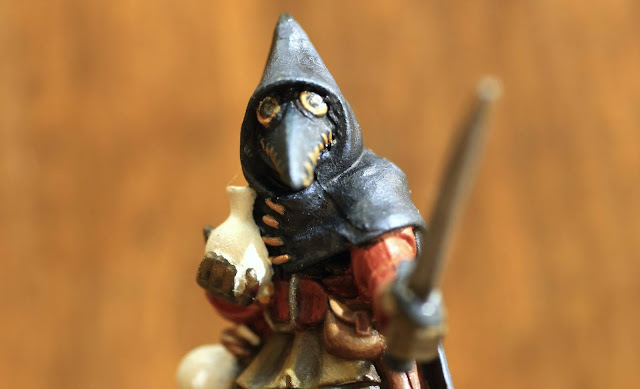 I painted Brother Lazarus' counterpart, Sister Hazel, back in July and at the time I said that I couldn't think of a more apt mini. Six months on, Lazarus is sadly still appropriate for the ongoing shitstorm that is Covid.

After finishing Horace I immediately started on Lazarus. I chose him because he happened to be the first one I saw when I looked in my figure storage box. 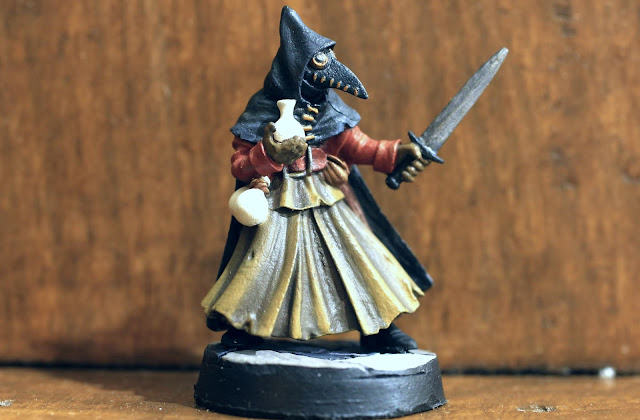 I started with his cape, and went with the easy choice of Black highlighted with Dark and Stormy greys. I hit his robes with Chocolate Brown and layered on Mahogany and Flat Earth for the highlights. After the layers dried I didn't think they were light enough, so I mixed some Filthy Brown into the Flat Earth, thinned it down and added it till I was happy.

Hazel is, off the top of my head, the only mini on which I've attempted stripes/freehand (although Joanne deserves a shout for her t-shirt). I thought about doing something similar on Lazarus, but decided against it because I didn't want him to look too much like Hazel. Instead I used Cavalry Red and Red Leather for his top. 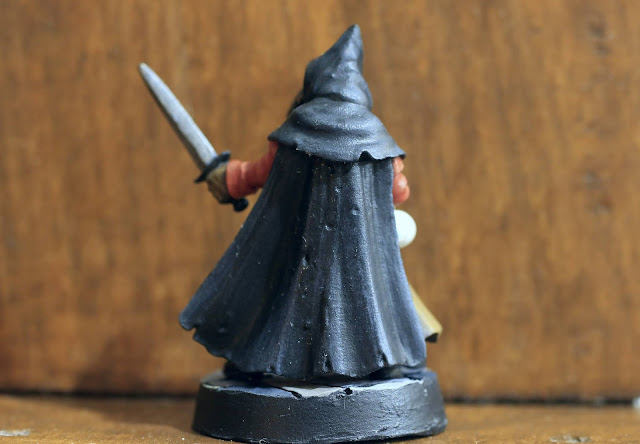 I was surprised at the pace of my painting; usually I'll take a break and walk the dogs, or watch telly, or do the laundry. However, today we're pretty much stuck in the spare room as the painters are working in the kitchen, our builder is doing the floors and ceilings in the basement, and there's about 16 inches of snow outside, so without anything to distract me I was blasting through and having fun. 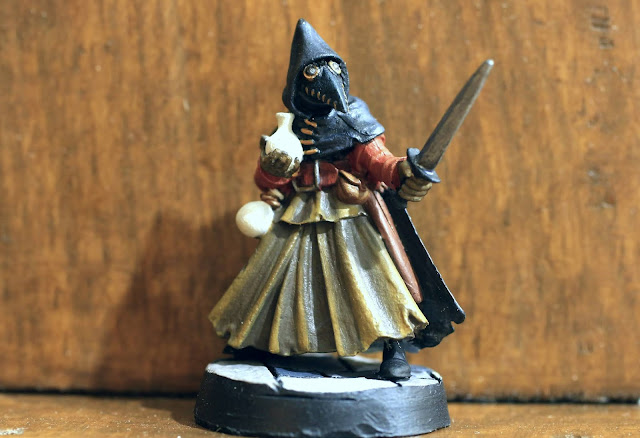 Hazel's mask was done in light grey, but again I wanted Lazarus to look different so I stuck with Black, highlighted with Dark Sea Blue. At this point I was down to the details, and I have a feeling I was still under the influence of Horace's 70s look as I used very muted colours: Black Red for the belt and Orange Brown for the stitches and goggle rims. The jars he's holding, like Hazel's, are Ivory and Silver Grey. Some Burnt Umber for his sword hilt, bag and gloves, and Natural Steel for his sword, and he was done.

I managed to find another resin flagstone base hidden away in a box and painted it to match Hazel's. Two dabs of superglue on his boots and I've done two figures in two days. And both are eligible for Dave's Paint What You've Got challenge and Anne's Immaterium First of the Year challenge. Holy crap, I've managed to follow three of my resolutions! 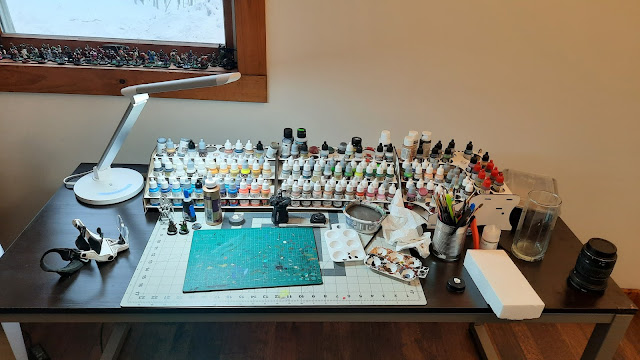 I've made more progress on the painting station. I found my Vallejo paint stands and, after lots of help from Alica, I managed to assemble them, although the middle one has lost one of its sides; how that piece didn't make it into the same box as all the others is a mystery. All my paints, including the missing whites and greys, are racked up, I dug up a bunch of brushes I thought I'd lost, and I even found my smaller green cutting mat, which combined with the large grey one should protect the new desk.

The lamp is also new, another buy from Amazon, and I'm thinking about getting a second one for the other side of the desk. It has a daylight LED bulb and variable brightness. Speaking of the desk, the second one isn't due till sometime in February. So much for Amazon Prime.