You know, given I've owned a pretty decent DSLR for almost eight years, you think I'd get the hang of getting everyone in focus by now. But no.

These are five of the 10 paranormal investigators from Cthulhu: Death May Die. I started painting them while doing the shoggoth and found them to be pretty straightforward thanks to their chunky sculpts and lack of annoying details like skulls and purity seals. To my surprise I managed to blast through all five in the space of a couple of days. All of them have integral round bases, so I just covered them with sand and painted them with a couple of greys.

I'd usually make up my own character backgrounds for these poor sods guys, but their C:DMD stat cards come with all their info, so I'll just incorporate bits of it. 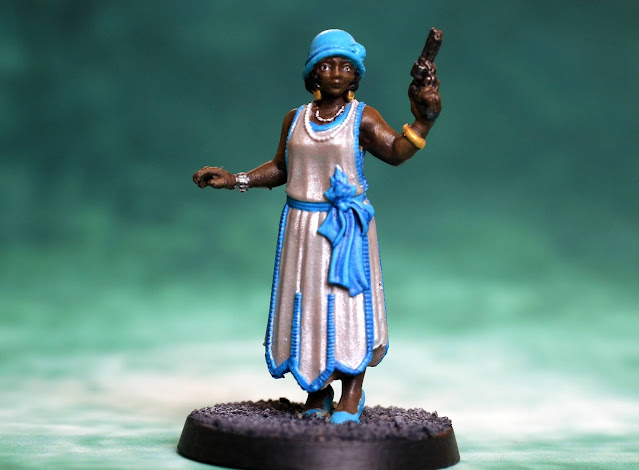 Lizzy Ives hails from London, so yay for a Brit being involved. She's "supremely lucky" and can find things other investigators miss.
Lizzy was the first investigator I painted. I deviated from the box art because her dress is supposed to be yellow, and I recently became allergic to that colour. After painting all the trim Light Turquoise, I realised it went really well with the grey primer. I googled "silver 1920s dresses" and was not disappointed, so the rest of her dress was painted Silver and it really works. Her hat and shoes are Blue Green.
Her skin is my usual Chocolate Brown and Flat Earth, and as per usual it's too dark. 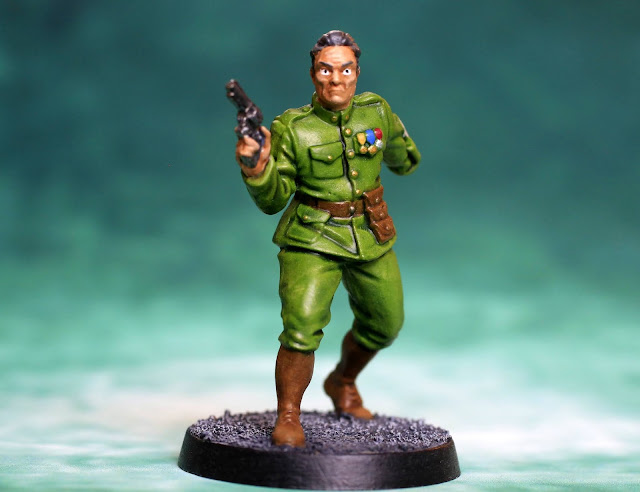 Meet Sergeant Ian Welles of Maine. He's a veteran of the First World War, where he lost an arm to either a German shell, a sniper, or "some God-damned cult-borne hell beastie", depending on who he's talking to.
He's a bit green. I couldn't find my pot of Olive Grey, so I went with Olive Green. It looked pretty bright until I slathered it with Green Tone, and now I'm happier. All the leather is Mahogany Brown washed with Sepia Wash.
I've nicknamed him Lenny after his resemblance to a certain dead Soviet leader. 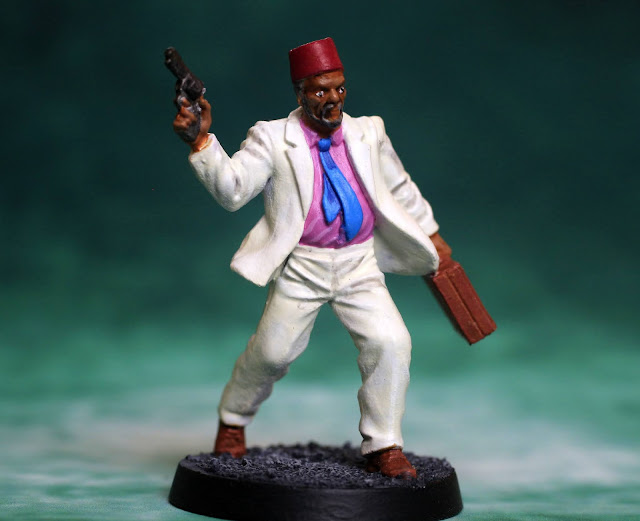 Ahmed Yasin from Mersin, Turkey, and can "stitch cuts, soothe burns and reattach severed limbs", so he's a pretty handy guy to have around.
Last year I said that I hate painting white, but these days I'm happier to give it a go. The only issue with Ahmed's clothing is that the Off-White looked crap over the grey primer even after two coats, so I switched to Ivory and it worked a lot better.
Ahmed's box art has him with a red tie, but I went with Andrea Blue over a Pink shirt. Some Red Leather for his shoes and briefcase and Flat Red for his fez and he was done, apart from his skin. I used Light Brown and it looked fine till I washed it with Sepia Wash and... oops. Highlighting it with more Light Brown did help a bit. 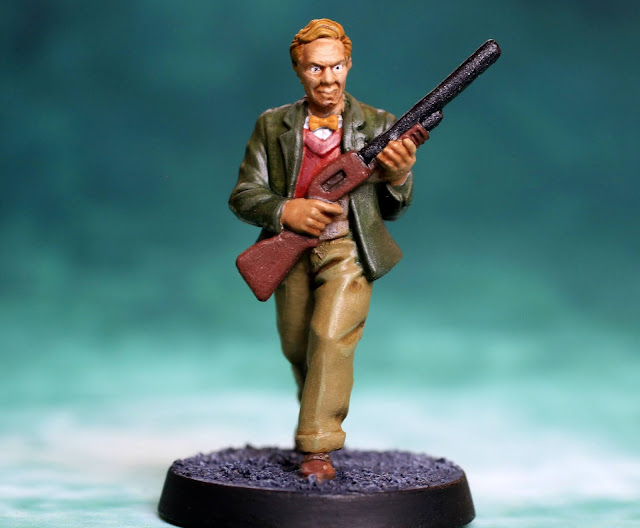 Lord Adam Benchley is from... Manchester? I'd have put my money on some leafy shire in the Home Counties, but OK. Lord Benchley is "quite mad, of course, having battled the cults for decades". You can just tell that behind that steely gaze and stiff upper lip, he's about to flip.
I found the Olive Grey in time to paint Adam. For those interested, it was in the paint rack behind the pot of Olive Green. I need new glasses. Anyway, that was his jacket sorted. His sweater — and I've just noticed I missed the bottom bit AARRGHH — is Cavalry Brown and his trousers Khaki.
Adam is the most heavily-armed of the investigators, and his shotgun is just Mahogany Brown with a mix of Gun Metal and Black Wash for the barrel. 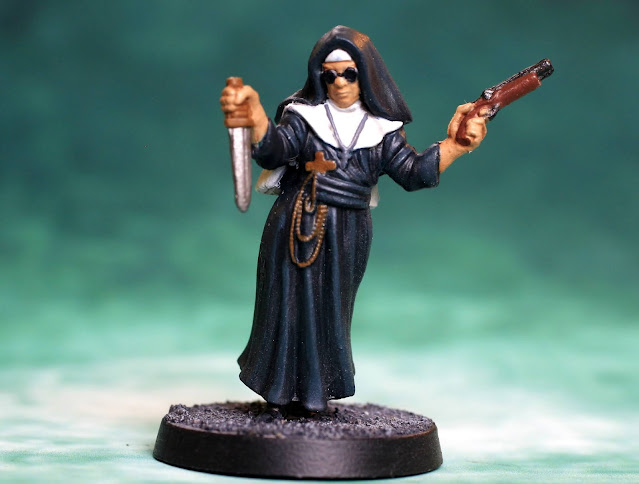 Sister Beth, from Bogotá, Colombia, is "an expert on the occult and their horrific practices". She's also convinced she's going to die soon but has made peace with herself.

Beth was by far the easiest to paint: Black Grey all over, highlighted with Dark Sea Blue, and some Off-White for the white bits. She isn't blind; after taking ages to get her glasses done without getting Black all over her skin tone, I decided to forgo painting the lenses Silver. She looks cooler in shades.

I really like all these sculpts. They're easy to paint with no real soft moulding issues (hello Reaper Bones!) or overdone detail (hello Games Workshop!) Lenny is probably my fave despite his near-70s lime green outfit, although Ahmed is a close second as I really like how his white suit turned out.

So that's the first five done, and I'm working on the others in between doing another entry for Monster May(hem).