Baz, Kez and Tez are ready to cause some mayhem. The fourth member, Maz, was lost during the group's prolonged adventure in the fabled realm of Spaire Roomia and is badly missed as he had all the snacks.

This trio of mischievous maniacs have been hanging around the Magical Box of Unloved Lead for more than three years. While painting the first group of Squealers I dug these little buggers out for Monster May(hem) but ended up getting them done in between the piggies.

Being tiny — about 15mm tall — they didn't take too long to do, and I just used pretty much the same palette as the Squealers, with the addition of Yellow Ochre for Tez's jersey. Their skin is Loren Green base with Scaly Hide highlights, and yes I do realise I've painted three evil Yodas. 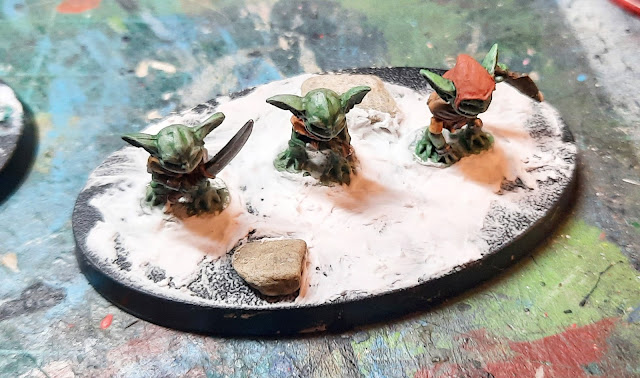 They're supposed to sit on 10mm bases, but I knew that would guarantee they'd be lost. So I decided to put all three on the same type of oval base I used for my trolls and motorbike. After gluing the gremlins down, I used modelling paste to hide the little bases that they're on and added a couple of small stones from the drive. I didn't bother covering the whole base to vary the height a bit, and once dry I painted it Heavy Black Green. 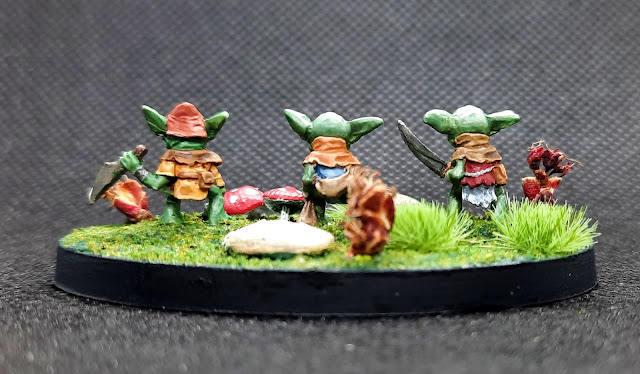 After a coat of PVA it was covered in flock. I found a couple of spare mushrooms left over from my Fungal Queen's base and repainted them Flat Red with White spots. With the PVA dry, I drilled holes in the base with the tip of my Xacto knife and stuck the 'shrooms down. The odd plant things are actual plant things that I found on our deck. I sprayed them with matte varnish to seal them and then glued them to the base. 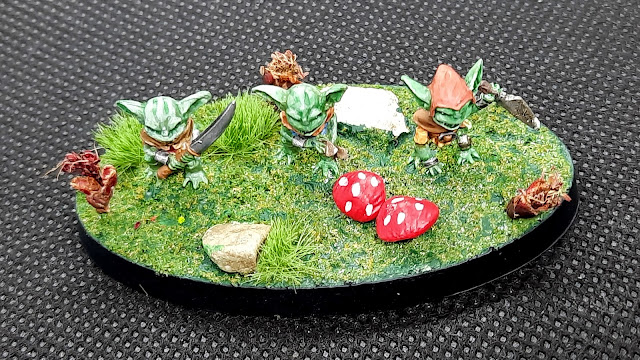 The base isn't as good as I'd hoped, and I wish I'd thought to use some cork as a rock ledge so at least one of the gemlins could be above the others. Oh well. But for three minis that helped keep me sane during the pigfest that was the Squealers, they look pretty good. Talking of the Squealers, the second squad is coming along nicely and as a bonus my cold is a lot better.