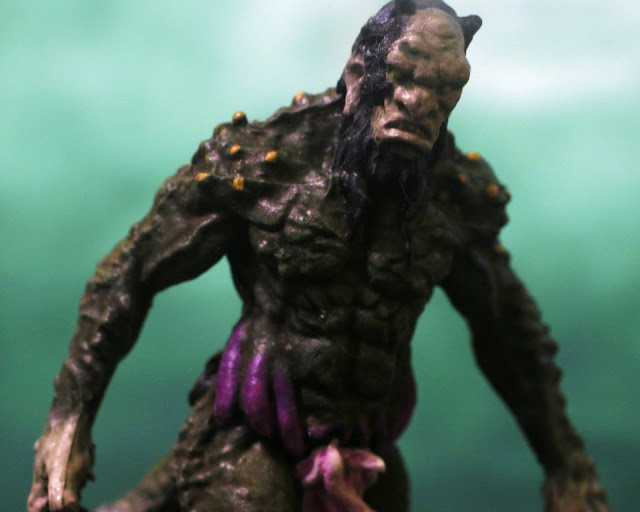 Imagine bumping into this in the bucolic New England countryside.

Wilbur appears in the 1928 story "The Dunwich Horror" and is pretty much the main character. As you can tell, he's an odd-looking bugger, and as a child grows at a ridiculous rate:

Within three months of his birth, he had attained a size and muscular power not usually found in
infants under a full year of age... At seven months, he began to walk unassisted.

His mother, Lavinia, is a "deformed albino", and it's heavily hinted that his father is none other than
Yog-Sothoth, who was called up by Wilbur's grandfather Wizard Whateley in some mad ritual.

Wilbur's physical development is matched by his intellect, and it's not long before he's dabbling in his grandfather's occult books, most notably the Necronomicon. Unfortunately it's this quest for knowledge that is his downfall; after breaking into Miskatonic University to steal their copy, he's attacked and killed by a guard dog, giving the horrified staff a look at what he actually is:

The thing ... was almost nine feet tall ... its chest had the leathery, reticulated hide of a crocodile or alligator. The back was piebald with yellow and black... the skin was thickly covered with coarse black fur, and from the abdomen a score of long greenish-grey tentacles with red sucking mouths protruded limply... The limbs ... resembled the hind legs of prehistoric earth's giant saurians, and terminated in ridgy-veined pads that were neither hooves nor claws.

How Wilbur kept all that covered up under a 1920s suit is beyond me, but give credit to Lovecraft for his amazing imagination and coming up with a truly disgusting creature. Willy's death is not the end of the story, though, as the true Dunwich horror is yet to come: his twin brother, a gigantic invisible creature that had been kept in a barn and fed cows, breaks out and wreaks havoc on the locality. Three Miskatonic professors manage to destroy it using a spell from the Necronomicon.

Like Yoggers, Wilbur doesn't come with Cthulhu: Death May Die. He comes with the Yog-Sothoth expansion, meaning I got two excellent larger models for less than the price of one of Games Workshop's "important person in space armour" figures. 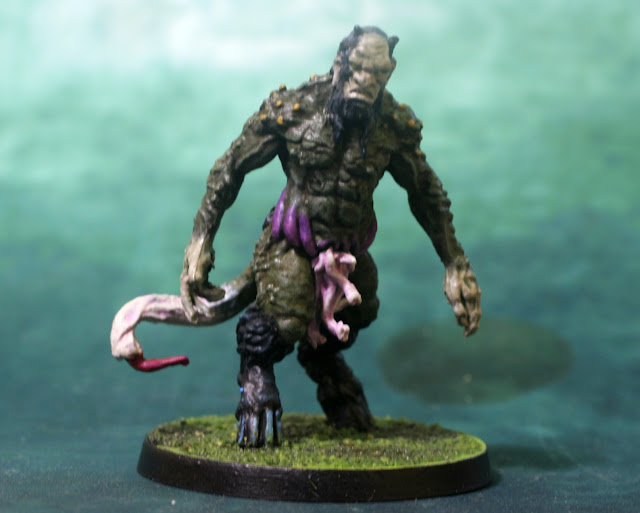 Wilbur's upper half, tail and upper legs were painted with Olive Grey and given a wash with Burnt Umber. I highlighted him by adding Ash Grey to the Olive Grey, and then painted his lower half black to represent the "coarse black fur", and painted his hair the same colour.

His abdomen tentacles (at least I hope they're coming from his abdomen) were hit with Mummy's Robes, a very pale pink-white, and washed with thinned Pink. I did the same thing with the lower half of his tail. The weird side tentacles are Purple with more Pink. With them out of the way, I highlighted Wilbur's fur with Dark Sea Blue and Deep Sky Blue. 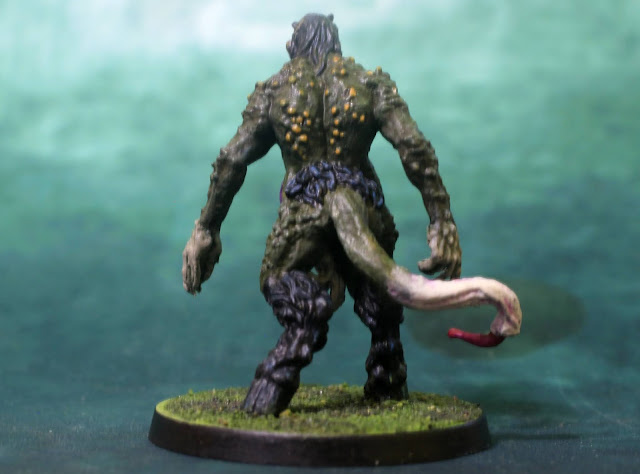 His face and hands, which Lovecraft emphasizes are the only bits the public would see as Wilbur would keep his clothes tightly buttoned up, are Pale Flesh washed with Green Tone and highlighted with White Flesh. The final thing was to paint his stinger Red and highlight it with Wizard's Robe, and dot some of his pointy bits with Filthy Brown.

His base is MORE SAND just painted Olive Green and washed with Green Tone to give it a bit of a swampy look. Here's Wilbur with his dad: 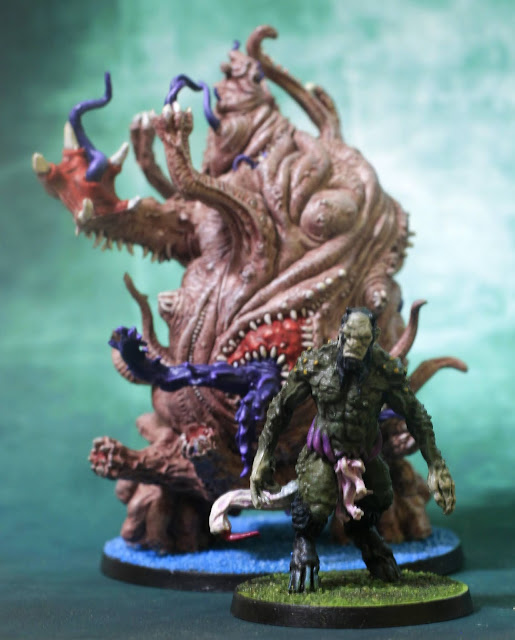 So, just Hastur and his yellow-clad minions to go. The new airbrush is due Friday, so I guess I know what I'll be doing on Saturday.

Azazel from Azazel’s Bitz Box has churned out a trio of Void Hounds, not to mention his Harbinger
Monster, a Balor, a Dire Crocodile, an Umber Hulk, a Coral Golem and a Sand Kraken.
Dave from Wargames Terrain Workshop has kept up his homemade Star Wars theme with a wamp rat, a ghoel and a rock wart, on top of his homemade joopa and krayt dragon.
Keith, who takes the blame for this challenge, has built an excellent Baba Yaga as well as a superb Ripper Beast.
Roger from Rantings from Under the Wargames Table has sculpted his own tentacled eyeball to add to his sabre tooth tigers.
After building and painting an excellent Aztec sacrificial altar, Mark of Markamorin.com has done another superb job making a magnificent Aztec Temple High Throne.
The Good Ground's Tom has painted a very unsettling creature called Siren Head, as well as an excellent Red Slaad.
Jeremy at Carrion Crow has made a start on Ithaqua the Wind-Walker despite being hampered by dried paint.