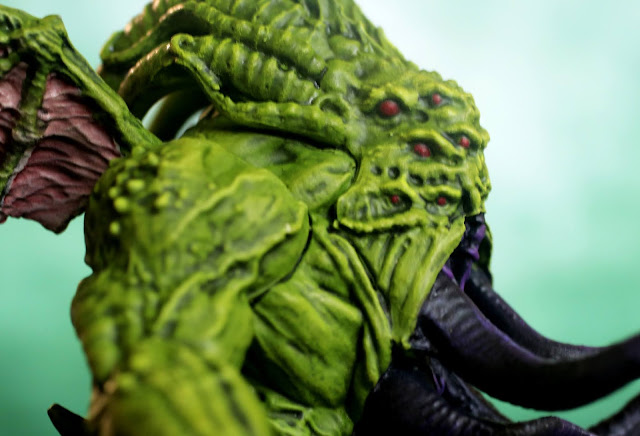 Star spawn are another creation of HP Lovecraft, although they're only briefly mentioned in the novella Beyond The Mountains of Madness. They're creatures that came to Earth millions of years ago and waged war with the Elder Things, eventually colonising the land while the Elder Things retreated to the oceans.
Lovecraft never actually describes the star spawn's appearance, but when Brian Lumley christened them "Cthulhi" in one of his novels the mini-Cthulhu look took off. CMON's sculpt is pretty awesome, but the mass of tentacles coming out of its mouth make it very fiddly to paint. In a continuing theme, I've named him Ed. 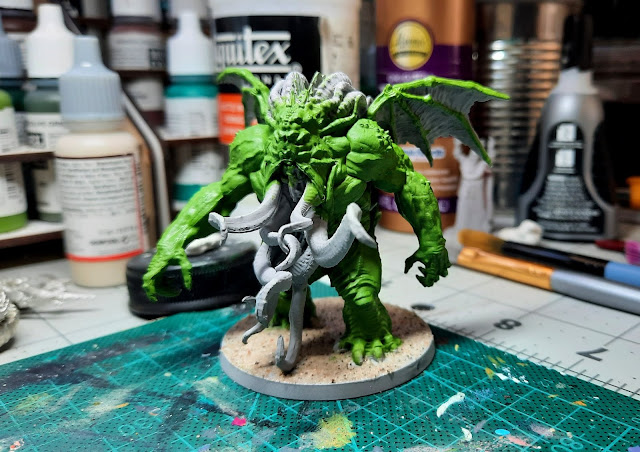 I wanted Ed to be green, but as per usual I wasn't sure which green. The eldritch demon I painted for last year's Monster May(hem) was done with Black Green and Yellow Green, and as I still have a large Cthulhu to paint I want to keep the darker green for him. So, with memories of Lennie still fresh in my mind, I went with Olive Green. Besides, why shouldn't a terrifying alien creature from the depths of space be the same colour as a 1970 Plymouth Barracuda?
Once the Olive Green was dry, it was time to crack out the new pot of Green Tone and plaster Ed all over. Unfortunately it dried pretty glossy, so I was left having to decide whether to brush or spray it with matte varnish. I bought a can of Krylon matte varnish a couple of weeks ago but haven't used it yet, and I was a bit paranoid that it would dry with the dreaded frosted look. But after a quick prayer to the Dark Gods I went ahead and sprayed Ed with it, and it worked. 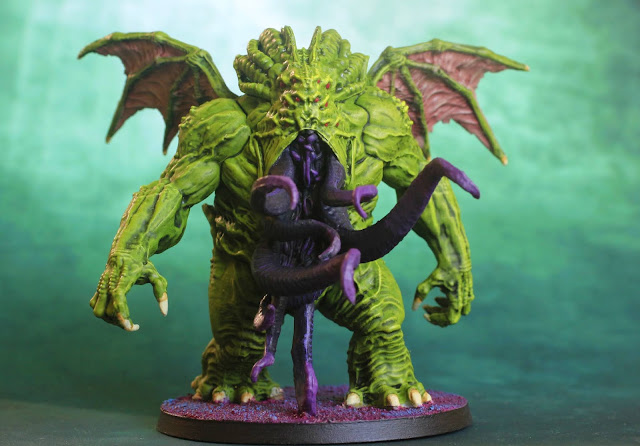 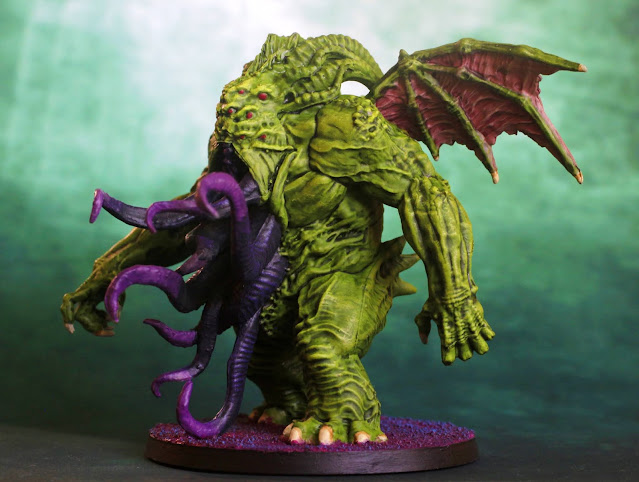 With his body done, I hit the wings next as the mass of tentacles wasn't too appealing at that point. I painted them Pale Flesh and gave it a thorough wash with Red Tone. While I waited for that to dry, I began basecoating Ed's tentacles. For some inexplicable reason — seriously, I have no clue why I did this — I painted them Black Grey. 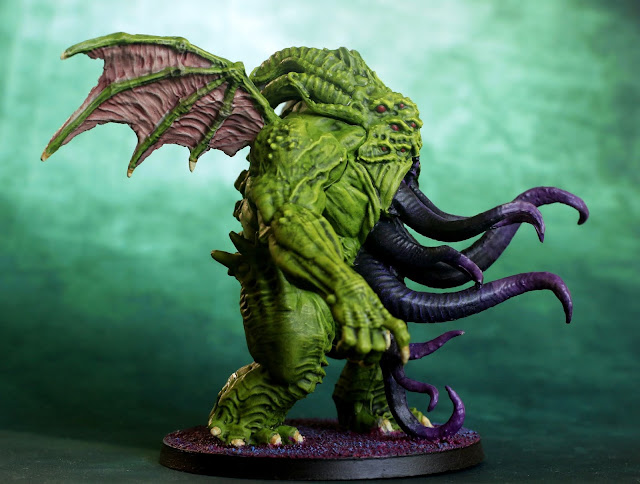 Once the Red Tone dried I drybrushed Ed's wings with Pale Flesh, then turned my attention back to the tentacles. I frankly couldn't face repainting them in a more appropriate colour like Violet, so I just layered on Purple at the ends until I got the effect I wanted. It sorta-kinda worked. The grey parts were drybrushed with Blue Violet to add some colour, although the shallow detailing didn't help. The final touch was dotting Ed's 12(!) eyes with Flat Red and his claws with Bonewhite and Sepia Wash, and he was done.
Alicia thinks Ed is "gross" so I'd call that a result :-)
The base is more sand, and Christ I'm getting tired of them. Still, only 21 to go after Ed. I painted it Wizard's Robe and washed it with Red Tone, and was about to highlight it with Pink when I realised I'd already done that for Bob. So I rewashed it with Purple Tone and, stuck for a highlight, used Electric Blue to add a bit of weirdness.
I also started on the four Cultists of Hastur today, but apart from doing their robes in a crappy yellow basecoat and basecoating their tommy guns I didn't do much to them. I also began another four zombie apocalypse survivors from Hasslefree as I just fancy doing something non-Cthulhu this month.

Keith, the evil mastermind behind this challenge, painted a superb Ripper Beast.