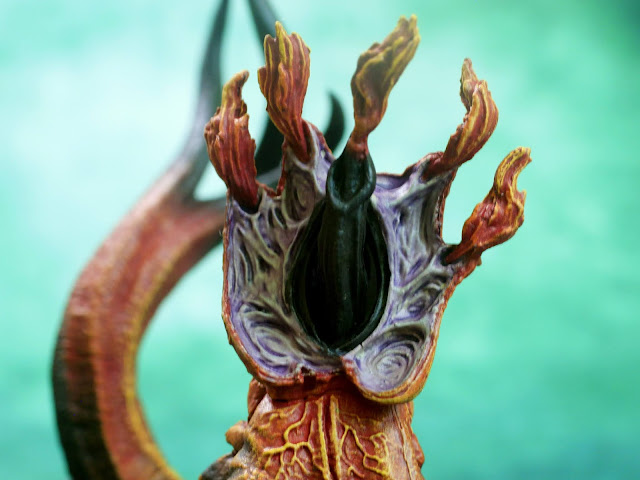 Finally I get to use some colour!

Fire vampires are another Mythos creation that have nothing to do with HP Lovecraft. They're the invention of writer Donald Wandrei, and first appear in his short story "The Fire Vampires", published in 1933. It crosses sci-fi with Lovecraft's Cthulhu mythos, and it's a story I haven't read.

Fire vampires are servants of Fthaggua and travel with him on a comet called Ktynga. They usually appear as crimson bolts of lightning that engulf their victims and burn them alive as they absorb their souls and memories. As a bolt of lightning would make for a pretty boring mini, CMON went for a different look, a sort of leech that shoots flames. I like them. 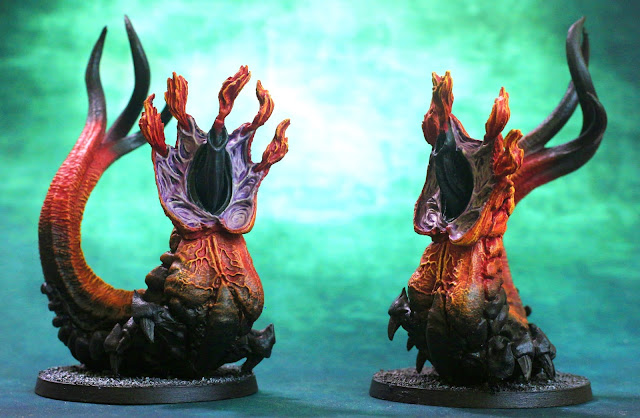 I started these chaps by airbrushing them Red. The box art has them with a black lower third, and as brush painting around all the legs did not appeal to me I refilled the airbrush with black and painted over the red. I also added black to the ends of their tails, and I was happy with how the fading looked. I really need to learn to use the airbrush to paint, not just basecoat.

As usual the airbrushed paint took no time to dry, so it was on to drybrushing. I started with Bright Orange, which is one of those colours that's pretty intense but doesn't cover well. It took about five drybrushes on both models until I thought they looked bright enough. 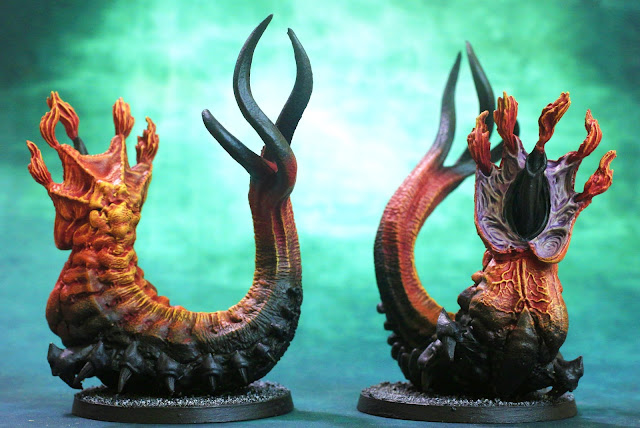 I left the orange to dry and got on with basecoating my cultists in red, using the airbrush to save some time and effort (more on what a pain in the arse that was in a future post). Returning to the vampires, I hit them with a couple of drybrushes of Golden Yellow and finished with some Lemon Yellow.

The last bits were their faces and the flames. I used Pale Flesh again (I've used more of it this month than I have since I bought it two years ago) washed with Purple Tone and highlighted with more Pale Flesh. The central tongue(?) thing was painted Black and then it was time for the flames. Oh, the flames.

I've had to paint them before and I really don't like how they look, and I don't like painting them. They were hit with Red, then more Bright Orange and Golden Yellow. They look good enough, so I left them at that. I did debate painting the vampires' claws Ivory but decided not to in the interests of sanity.

The last thing was their bases, which are sand (surprise!) painted black and highlighted with Ash Grey and White. I thought the ashtray look suited these chaps.