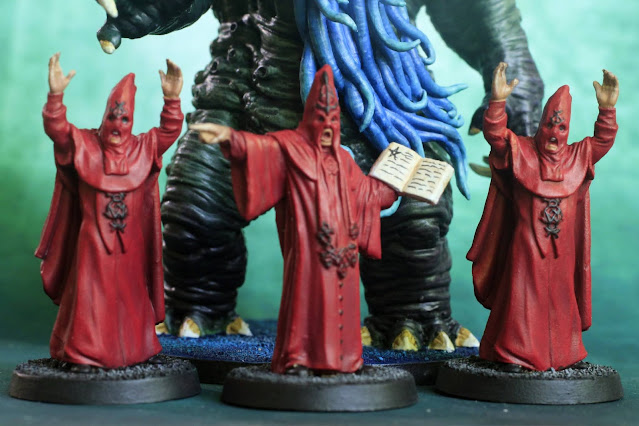 Ph'nglui mglw'nafh Cthulhu... aw crap, I used the same first line last year. Let me come up with something else.

[thinks for a couple of minutes]

Cthulhu is the entity in Lovecraft's writings. He's the cosmic outer one the whole universe is named after: the Cthulhu Mythos. What's regarded as the first Mythos story is "The Nameless City" from 1921, although Big C isn't in the story and isn't even mentioned. It's also the first time the famous couplet referring to him is introduced:

That is not dead which can eternal lie / And with strange aeons even death may die.

In 1928 Cthulhu made his debut in "The Call of Cthulhu," which if I'm remembering correctly was the first HPL story I read, way back in the ancient time that is 1992. In short(ish), the story is told through the notes and papers left behind by a Brown University professor. It's split into three parts: the first revolves around a clay bas-relief and its odd history, the second around a police detective in the Louisiana swamps, and the third a Norwegian schooner captain. All are linked by weird global events such as mass hysteria and reports of strange dreams. It's a really good story, well told and well worth a read.

Cthulhu only actually appears as a physical entity in the 1928 story. He's referred to in a few others but only in passing. It's kind of a surprise that he's has had such an impact on pop culture given his single appearance in an HPL story.

I was already a horror fan when I read it, but it had an immediate effect on me; I'd never read anything like it before. I was hooked, and was an immediate fan of Lovecraft's writings. Although I'm closer to 50 than 21 these days, I still read his stories and pretty much every other Mythos story I can get my hands on. 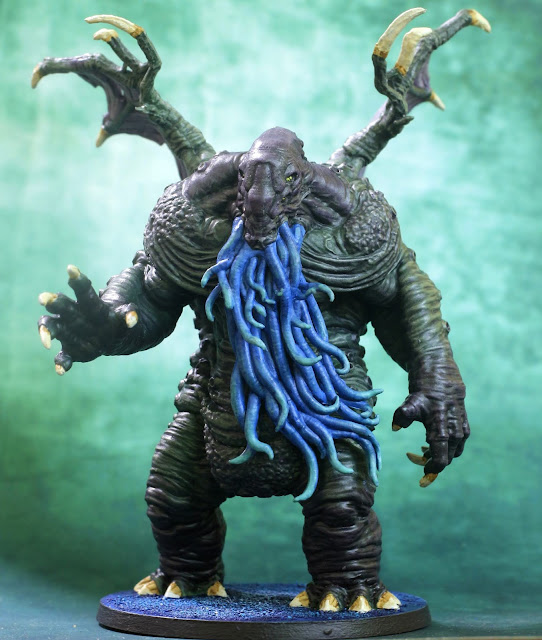 Anyway, here he is in all his towering plastic glory. I'd planned to paint Cthulhu last, but thanks to my airbrush crapping out on me I decided I could get him done with brushes if given access to enough coffee and synthwave.

Cthulhu was already primed in light grey, so it wasn't too hard to plaster him in Heavy Black Green as a basecoat. With that done, he was covered in Purple Tone and left for a bit to dry. 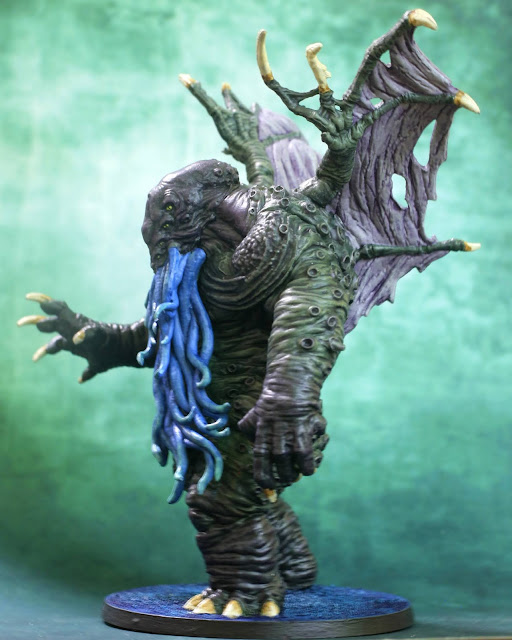 Last year I went with a yellow-green look, but this time I wanted to go in a different direction. I gave him a good overbrush with Olive Grey and added Ash Grey for the highlights. 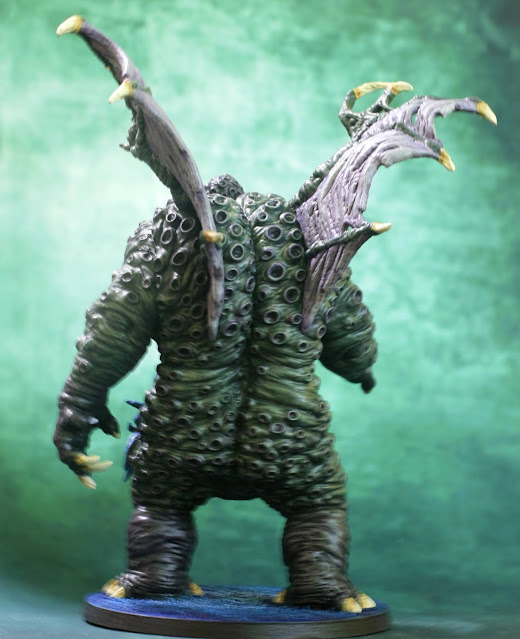 Excuse the blurry photo. I thought about doing the sucker things on his back and arms in a pink-grey but once I mixed it up I didn't like the colour, so instead I gave them a once-over with more Purple Tone. His wings were painted Ash Grey, washed with more Purple Tone (it didn't help that I misplaced the bottle in the paint rack and couldn't find it for a while) and highlighted with Ash and Ghost greys. 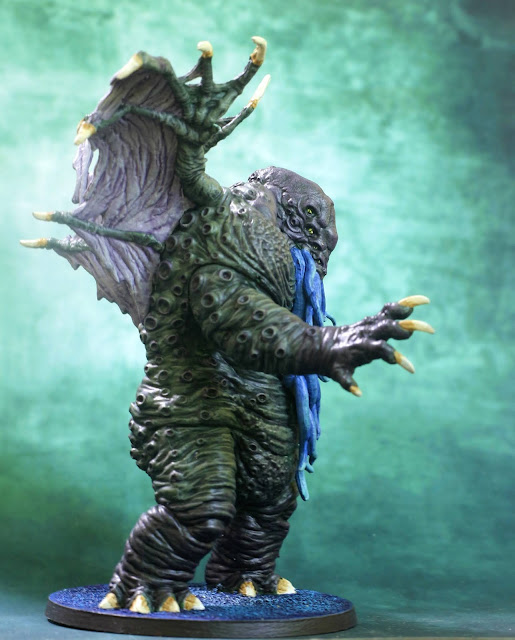 With the body and wings finished, it was time for the claws and tentacles. The claws were easy enough — Bonewhite shaded with Sepia Wash and highlighted with Ivory and White. I didn't want to continue the purpley-grey colours on the tentacles so I used Deep Sky Blue, washed with Blue Tone and highlighted with Nihilakh Oxide. Yes, I used a Citadel colour. And my God their pot lids are a pain in the arse. His eyes are Yellow Green with black lines for pupils.

I thought he needed something else to break up all the green, so I dug out the Purple Tone again and used it as a layer/glaze over his head, shoulders, lower arms and lower legs. The base is sand, painted Dark Prussian Blue and highlighted with Blue-Green and a bit of White. 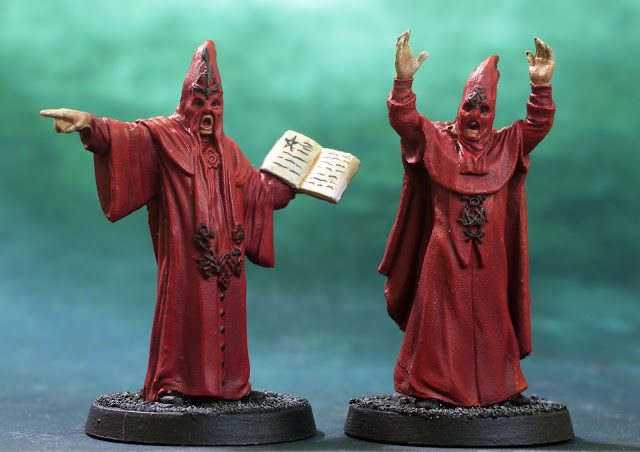 The cultists. Oh Christ, the cultists. I did these guys over the last week or so, although it seemed to take longer. I thought I'd cracked the back of these when I sprayed them with Rust Red primer but it was way too brown, so I had to get out the airbrush and redo them all with Red. And we're off to a great start right there.

They all got a heavy overbrush of Flat Red, followed by another drybrush with the same colour. After than I did the details: their shoes, eyes and the amulet things in Black (in hindsight the amulets should be in a metallic, but whatever); their skin in Heavy Fleshtone drybrushed with Basic Fleshtone; and the books in Off-White for the pages and Flat Earth for their covers, not that you can see them. I did the text using Black with some flow improver, and tried to do different symbols on each one along with squiggly lines.

There's a lot more detail I could have put on these guys. Their surplices could have been painted white, for starters, or I could have done their sleeves in a contrasting colour, or added more shading. To be honest I found them a drag and was just happy to get them finished. Their bases are MORE SAND painted black and highlighted with Ash Grey.

With Cthulhu and his acolytes out of the way, I'm left with Hastur and his cultists. They're going to have to wait till the new airbrush shows up on Friday, so I get a short break from the insanity-inducing tentacled horrors for a few days. Still stuck with the dogs, though.

Here's a rundown on the usual suspects in this year's Monster May(hem):

Keith, who came up this challenge in some fever dream of blasphemous horror, has done a fantastic job constructing and painting Reaper's Baba Yaga as well as a superb Ripper Beast.

True to form, Roger from Rantings from Under the Wargames Table has sculpted his own mini: an awesomely creepy tentacled eyeball made from greenstuff and a table-tennis ball, to add to his sabre tooth tigers.

Azazel from Azazel’s Bitz Box has done another three minis: a very Slaanesh-looking Harbinger Monster, a very Khorne-looking Balor, and a Dire Crocodile to add to his Umber Hulk, Coral Golem and Sand Kraken.