Neglected but Not Forgotten: Aina, Valkyrie 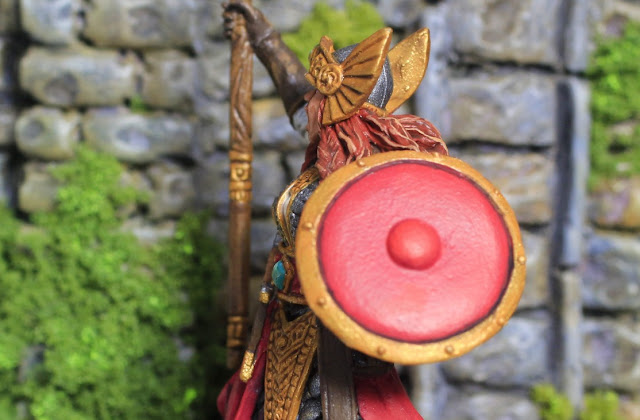 I originally bought the plastic Bones Aina at Brookhurst Hobbies in summer 2018. That turned out to be a mistake because when I took her out of her blister pack a month or two later, her sword resembled a banana, which I somehow didn't notice when I purchased her. I tried the usual hot water/ice water method but no luck. Into the Magical Box of Unloved Lead she went, and there she stays till this day.
Back in late 2019 I decided to celebrate Christmas early by treating myself to a bunch of Reaper minis (Roger, for once these were *not* bought to get free shipping on Amazon). I chucked the metal version of Aina into my basket as she is a fantastic sculpt by Patrick Keith. I got 70% through painting her when I kind of just gave up, and I have no idea why. She joined her plastic doppelganger in storage. Ann over at Ann's Immaterium is running a Neglected But Not Forgotten painting challenge, and after finding both Ainas in the Magical Box of Unloved Lead, the metal version is perfect. 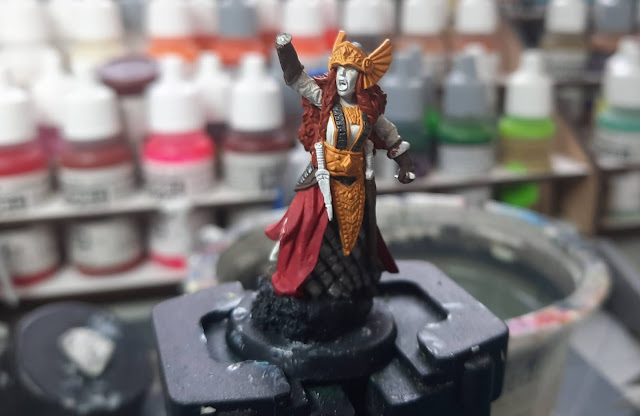 Here she is as I found her in the box. Her basecoat survived over a year in storage thanks to me lining her compartment with some foam. I want to keep the same paint scheme — which I ripped off from Reaper's site — as I think it's great. But now I have to identify which colours I used. After comparing her paints to what I have in my rack, I narrowed it down to Red, Filthy Brown, Chocolate Brown and Cavalry Brown. I don't know which metallic I used for the silvery bits so I'll use Plate Metal and see if it matches. I'm happy I never got around to her skin tones as I'd have no chance identifying those, and her top is still white primer.
The metal Aina comes with a separate shield and a choice of a sword or a spear, and shockingly both were still in the same box compartment as her.  The only thing missing was her shield, which is a bugger, so I'll have to hunt around for it. I don't think a plastic Citadel chaos shield is going to do the trick. 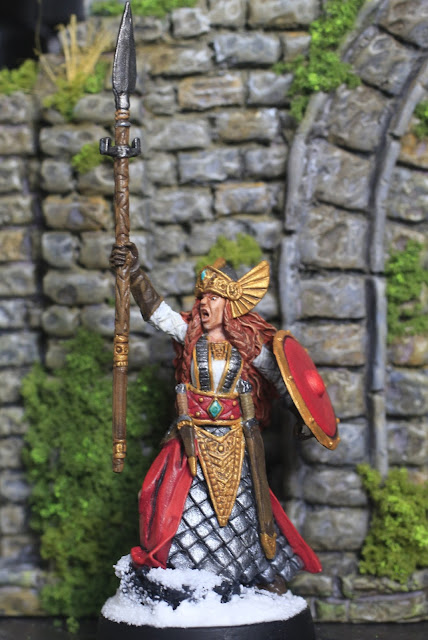 Here she is, in all her  finished glory. The first job was to finish off her dagger and sword. Once that was done I hit all the gold bits with Brass and shaded them with Umber Wash.
Her dress was given another thin coat of Red and highlighted with Flat Red and Vermilion, and I used Black Wash for the deepest creases. I decided on Ivory for her top and the bit of her underskirt(?) you can see, with Off-White to highlight it. At this point I realised that what I thought were creases all over her sleeves are actually leather straps, leaving me with the fun and games of having to paint and highlight all these little lines. So I didn't, instead just shading them with Grey Wash.
The gems on her helmet and belt were hit with Emerald Green as I wanted to break up the red, silver and gold. 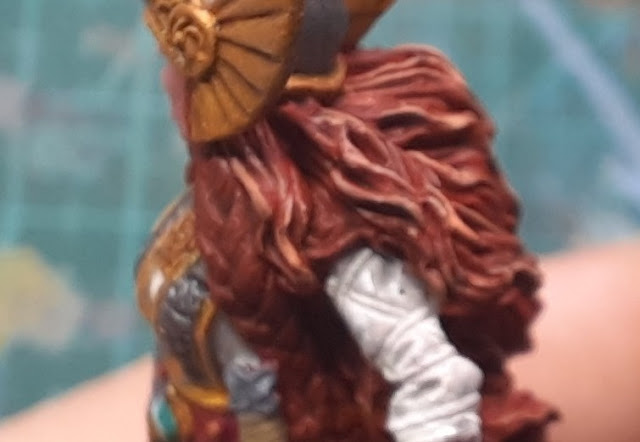 That moment when you're doing her hair and you realise that the odd flat bit is actually armour. 'Scuse me while I dig out the Filthy Brown and Brass. 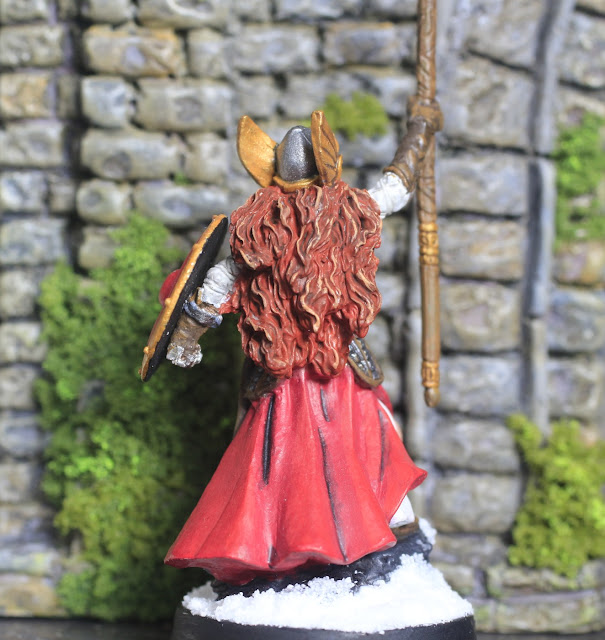 Her hair... oh God, her hair. It's fantastically sculpted into a flowing mane with long braids, and it took me a while to work out how to highlight Cavalry Brown to get a proper red hair look, and when I say "work out" I mean "make it up as I go along". I ended up adding Heavy Orange to the brown and using that, and it looks... OK. 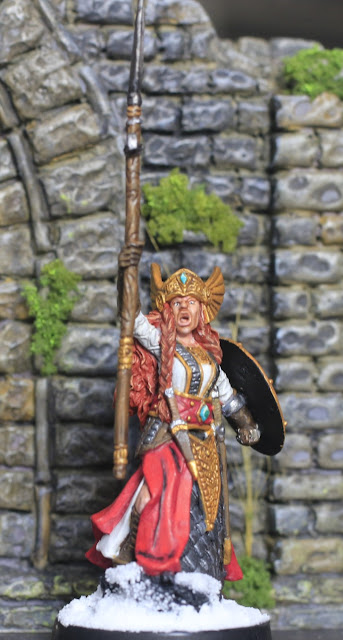 I don't know what happened to Aina's face. I thought I'd done a really good job on the skin tones. It looks a lot lighter in real life; in the photos it looks like she's vacationed in the Sahara and grown designer stubble. I was tempted to give her skin another highlight but frankly just couldn't face it right now. Her eyes weren't that bad to do for once, only taking two attempts for her left one and three for the right.
Reaper's example has the shaft of her spear painted silver, which I thought was odd, so I went for a wood look with Burnt Umber and Mahogany Brown.
The challenge's rules say that the mini has to be based, and the obvious choice was snow. I dug out my Army Painter snow flock, covered the base with PVA glue, and dumped it on. Once it was dry I gave it dabs of matte varnish to make it look less like tiny bits of white plastic. 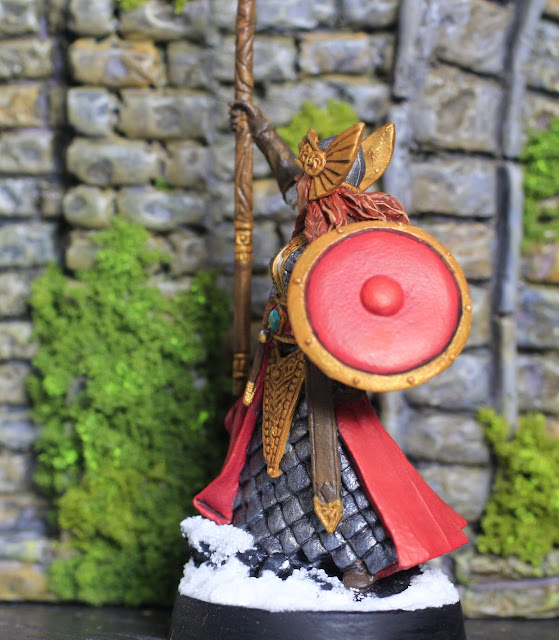 By some miracle I found her shield while looking for the snow flock. I really wanted to do some kind of Viking design on it but knew that with my freehanding skills I'd be better off going for a solid colour, so more red and brass and it was done. The back of the shield has no texture at all so I just painted it black.
Overall I'm really happy with her, except her face. Aina's is a fiddly miniature to paint, and she's one of those where you're happy to finally be done with it. I had to redo and touch up several areas where I'd got red on the silver bits or ivory on the brown bits, and her hair was a sod. But she looks good and she's a solid first entry in the challenge, for which I have another two (or even three, if I get my act together) to come.
Labels: basing, female, painting challenge, reaper, snow, vallejo