Taking a look at Cthulhu: Death May Die Season 2 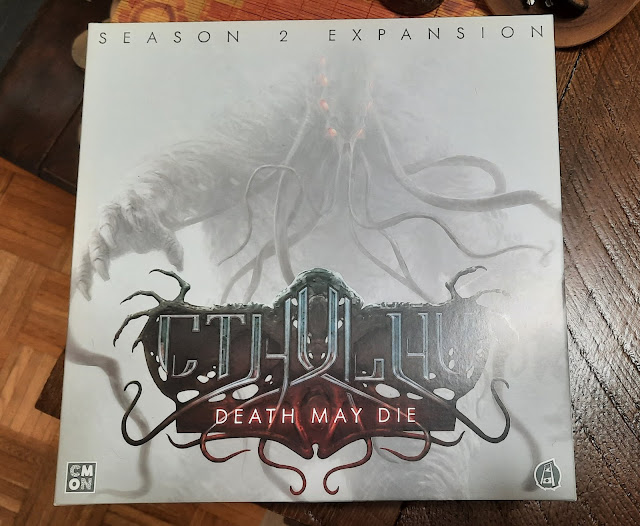 I have a few shreds of sanity left after Monster May(hem) and it's not like I need them, so why not?

First off, I want to apologise to my reader(s) for the lack of posts this month. It's because I did a very stupid thing: I got a job. Stacking shelves. Yes, 49-year-old out-of-shape me is lugging bags of dog food and boxes of frozen pizza around a supermarket for the princely sum of $11 an hour. To put it lightly I'm constantly shagged out, hence the lack of scintillating posts.

I am working on some Forgotten Heroes projects, but one is being made by me out of greenstuff so you can probably imagine how that's going. The others need bits I ordered off Ebay, and despite it being June 22, Ebay is still telling me they'll be here last Friday. Yay. Frankly, I'll be gobsmacked if I get any of the projects finished before the end of the month.

Anyway, onto the new game. After finishing all the models from Cthulhu: Death May Die (well, almost all of them) I kind of missed painting chunky tentacled horrors. I knew CMON made a sequel to C:DMD so I looked it up on Amazon and bought it a couple of weeks ago, although as of know it's out of stock.

So for $50 — or, as I now think of it, the equivalent of 4½ hours of putting crap on shelves or 1½ Space Marine Primaris Apothecaries — I'm the proud owner of another 10 investigators and 17 monsters!

Sorry for the crappy photos; the battery for my DSLR is dead so these are taken with my phone on the kitchen table. 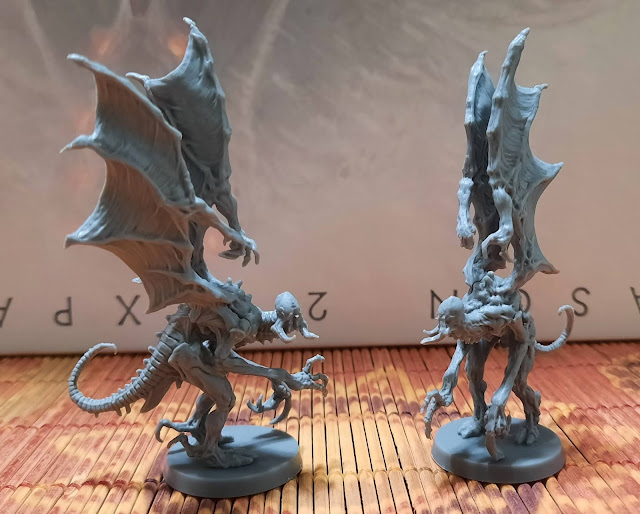 Let's kick off with the night-gaunts. Lovecraft introduced them in The Dream-Quest of Unknown Kadath, which I think I've read, but if I did it was years ago. They inhabit the earth's Dreamlands and are basically demons. They're described as being smooth and black, so I have to find a way of not making them look like my Hunting Horrors.

I'm a bit annoyed because at first glance I thought these were Mi-Go, of which I already have three. Mi-Go are among my fave Lovecraft monsters because they're just so horrible and they infest Vermont. Still, I can live with a pair of night-gaunts. 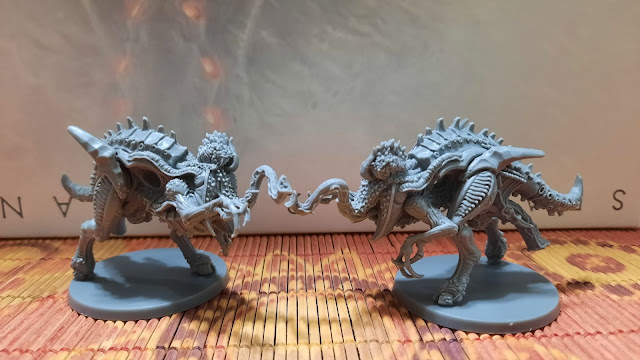 Next up we have the Hounds of Tindalos. They're the invention of Frank Belknap Long, and come from his 1929 story "The Hounds of Tindalos". Lovecraft mentions them in The Whisperer in Darkness, but neither author actually describes them. CMON has done a good job on this sculpt, which is bang in the middle between "awesome" and "they'll be a bugger to paint". 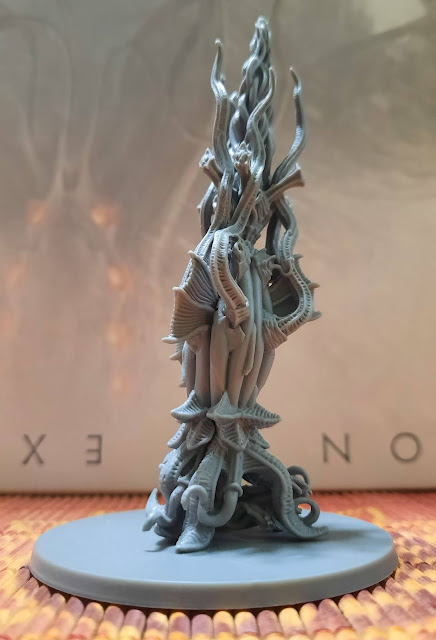 Here's a classic Lovecraftian monster: an Elder Thing. I painted an RAFM one back at the start of Monster May(hem) and I love these monsters and At The Mountains of Madness, the novella they appear in. Guess I'm gonna have to come up with a different colour scheme for this chap too. 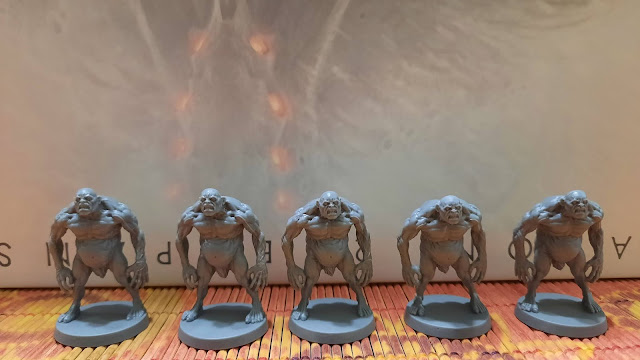 A menacing group of five Tcho-Tcho. I've heard of them but know nothing about them. They're the creation of August Derleth and are a cannibalistic people who live in the jungles of Burma and worship Hastur. They first appeared in the story "The Lair of the Star-Spawn" from 1932. 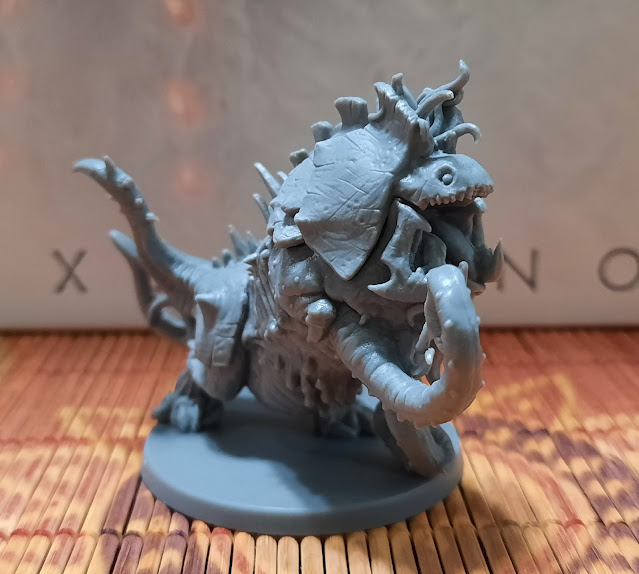 The bokrug is also known as The Great Water Lizard and is counted as a Great Old One, meaning it's pretty powerful. HPL created it for one of his earliest short stories, "The Doom That Came to Sarnath", published in 1920. This mini has lots of different textures so it should be an interesting one to paint. 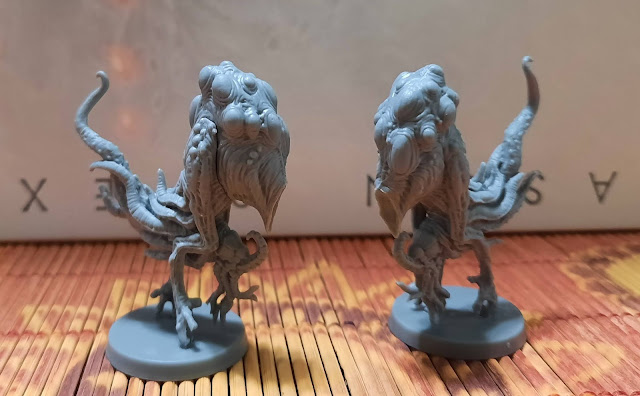 Flying polyps come from 1936's "The Shadow Out of Time", which also features the Great Race of Yith, another mini I was disappointed didn't come with the set. Polyps colonised Earth 600,000,000 years ago and are considered incredibly dangerous to humans, as if we had to be told that. 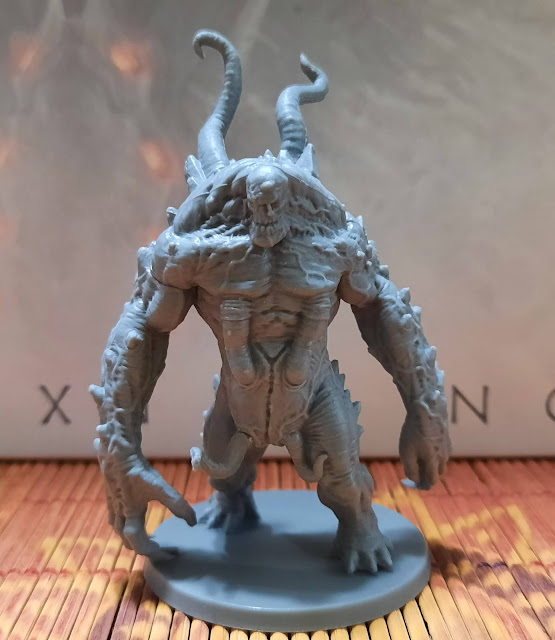 This is a dimensional shambler, although it could just have easily walked out of the 2016 Doom reboot. Shamblers are capable of switching between dimensions, and although visible in ours they cannot touch or be touched. Lovecraft introduced them in "The Horror In The Museum" (1932) although there are arguments that they were actually created a year before by Clark Ashton Smith in his "The Hunters From Beyond". 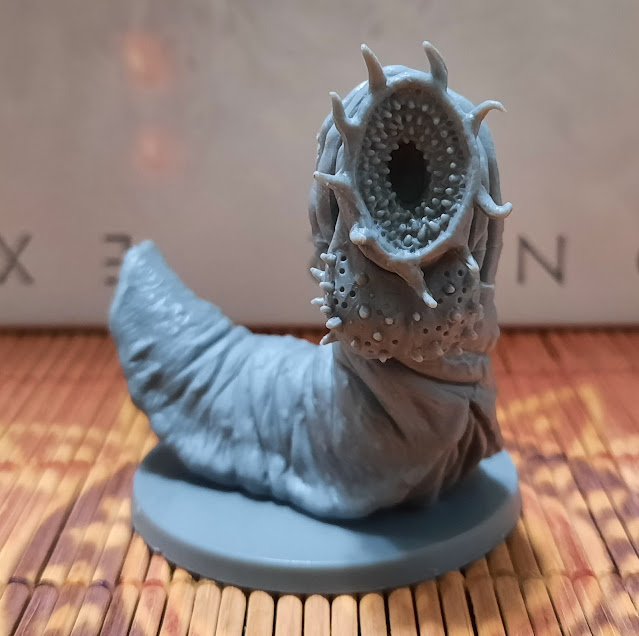 Yugg are huge worms that live underground and will tempt humans with wealth if they do their bidding. They were invented by writer and editor Lin Carter in his 1975 story "Out Of The Ages", which forms part of his Xothic Legend cycle of tales. This is totally one of those figures where I'll think, "that doesn't look too difficult" only to be proven completely and utterly wrong once I start painting it. 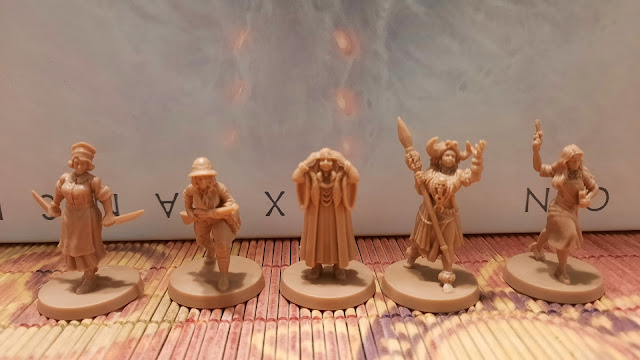 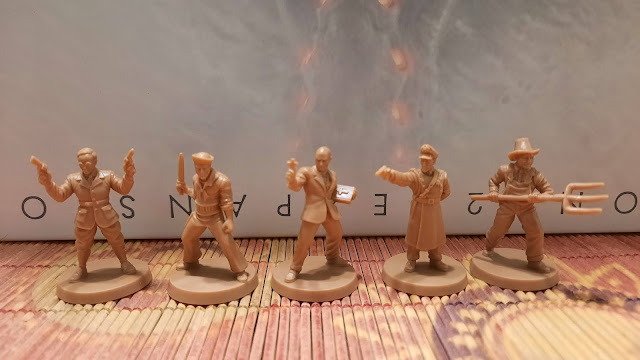 Just like the original game, all these sculpts are outstanding. Bags of detail, minimal flash lines (not that I bothered much with those last time) and I'm beyond happy that none of them need to be painted yellow. I've learnt a lesson from last time and will not just blast them all with black spray paint and instead actually put some thought into the primer colour.

Of course, it's just a case of when I'll get around to painting them. My Forgotten Heroes projects need to be finished, and as I'm working 2pm-9pm today and then 8am-2pm the next four days, short of me calling out sick/dead I have no idea when I'll have time, not to mention energy. Man, I wish I had another 14 months off...