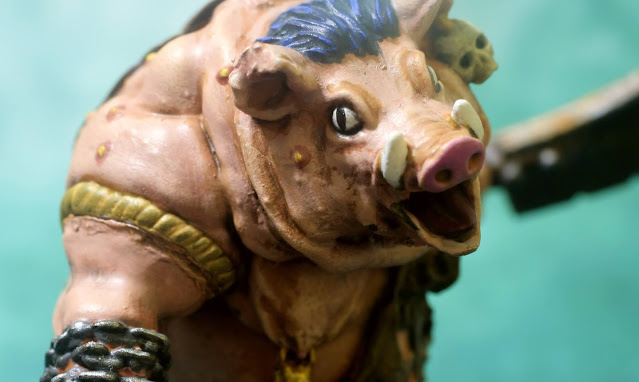 Porkchop was part of RBJ Game's Yippers and Squealers Kickstarter, which I backed in December and received in March. I actually pledged for the Squealers core set, but when I saw him on the RBJ site I decided to pick him up too because let's face it, why would I not want a massive pig armed with a cleaver and meathook?

Porkchop is all metal, and needed to be assembled with the aid of greenstuff. Some of the gaps were pretty horrific (although nothing compared to what I'm dealing with on my first-edition Keeper of Secrets) but I managed to get them done with the usual amount of swearing. After assembly he was glued to his 45mm base. 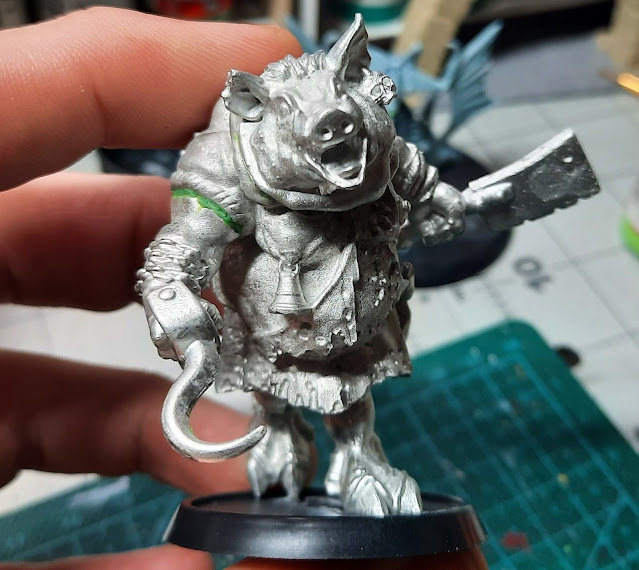 He's a heckin chonk of a mini. Porkers was sprayed with white primer back in mid-April. He was originally going to be my main entry for Monster May(hem) along with a couple of dragons, but then I got stuck into the whole Cthulhu thing. 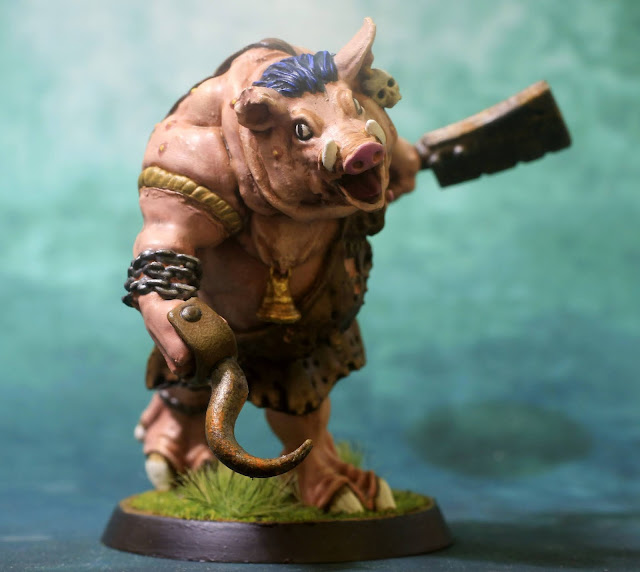 I kicked off by painting his skin Brown Rose to give the flesh tones a decent foundation. After that Porks was given a thorough once-over with Flesh Wash. That's when I knocked over the Citadel holder, he smacked into my desk, and his right arm popped off. AWESOME. I glued it back on, but now there's a bit of a gap that you can't really see thanks to some clever camera angles. 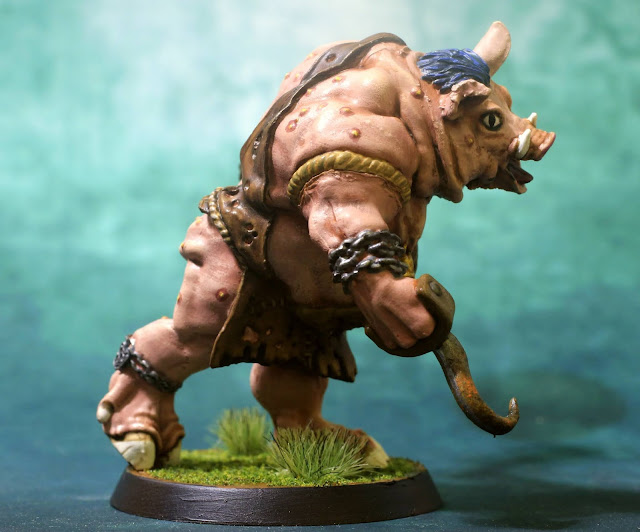 After the glue was dry, I reopened the Brown Rose and gave El Cerdo a heavy overbrush with it, doing my best not to end up back at square one. After that I used a lighter overbrush of Brown Rose with some Basic Flesh, and then a final heavy drybrush with Basic Flesh. At this point, I hated the paintjob. It looked like a mass of pinky-brown and I was not a happy bunny.

I redid some of the recesses with more Flesh Wash, and left him overnight. The next day I took a good look at him, and I was a lot happier. He didn't look anywhere near as bad as I thought. 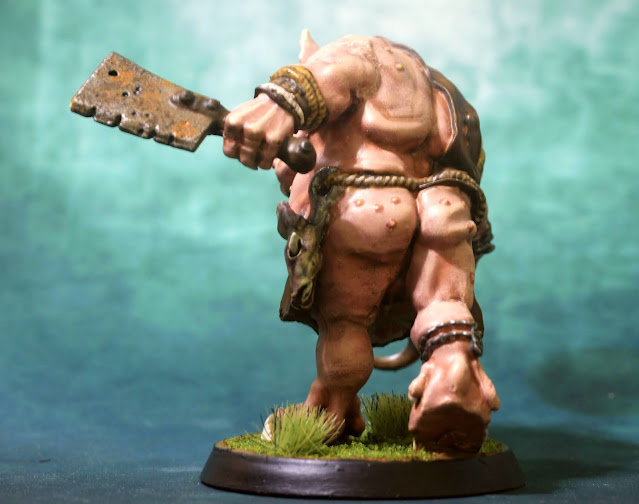 So, details. Yay. His tusks, fingernails and hooves (yes, pigs have hooves, and I had to google it to check) were painted Ivory and given a wash with Sepia Tone before being highlighted with Off-White. Then it was the fun part — the chains around Porkie's wrist and leg. They got a very careful coat of Ash Grey and then another coat of Plate Metal. I always love painting minis where I have to paint small details one colour, do it successfully, and then have to paint the same small details a different colour all over again. I shaded them with Black Wash and highlighted them with Silver. 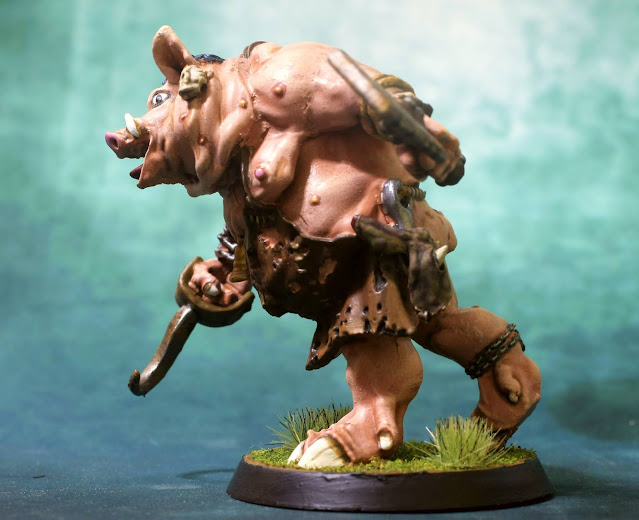 His apron has lots of cool little holes that aren't total pain in the arse, honest. I painted it Chocolate Brown to start, doing my best not to get any of the dark brown on the light skin. I was almost 98% successful. After that it was a case of layering on Mahogany and Light Brown until I was happy with it, and giving it a once-over with Burnt Umber Wash to tie the tones together. The ropes around his waist and left arm were given a coat of Off-White and shaded with Sepia Wash. That's when I noticed he's got leather wristbands, so I had to paint them to match his apron. 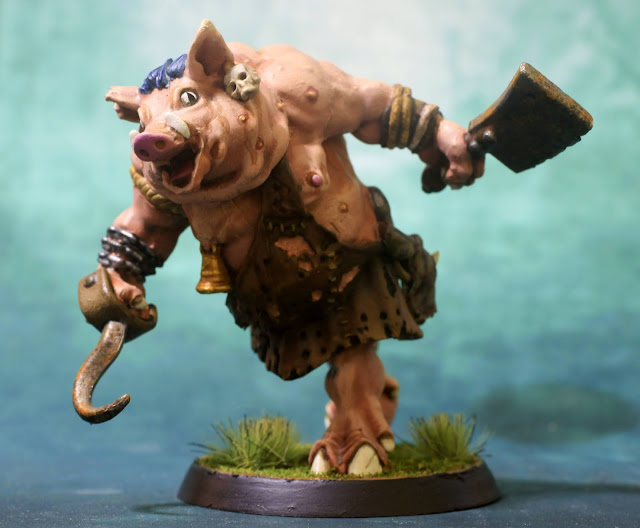 Man, there are so many little details on this model. His boils/zits were given a dab of Moonstone and then tinted with Red Wash to give them a more irritated look. The nipple bell (words I never thought I'd type) was given a coat of Filthy Brown and then Brass, and was washed with Sepia Wash and highlighted with Gold. I did Porkage's skull earring the same way before deciding to repaint it to look like a real skull.

For some reason there's a rotting leg hanging from his rope belt, so I just went with my zombie flesh recipe of Dead Flesh with Green and Purple tones. His cleaver and hook are Plate Metal, Black Wash and some Dry and Fresh Rust effect paints. Pork's hair is Dark Sea Blue highlighted with Blue (its Spanish name is cooler: Azul Intenso, which sounds like it should be a minor Marvel superhero) and Flat Blue.

After that it was just a case of finishing his eyes, doing his tongue with some Burnt Red, and basing him.

I can't lie, as much as I liked painting Porkchop by the time it came to do his base I was done with our porcine pal and wanted to get on with something else. I built up the base a bit with modelling paste, painted it Flat Brown, added glue and green flock and a couple of random tufts. After painting the base rim black and then giving it and him a coat of matte varnish, he was finally done.

Sorry this is such a long post, but Porkerino took a lot more work than I thought he would. At the same time he was fun to paint and I'm happy with the result. 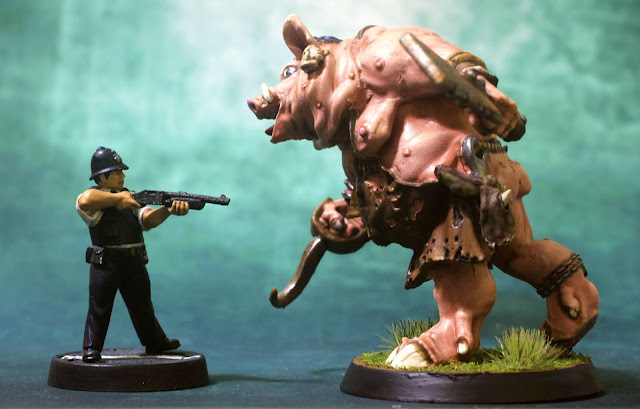 EVERYTHING IS FINE, SAM!