Forgotten Heroes: Weird and pissed off 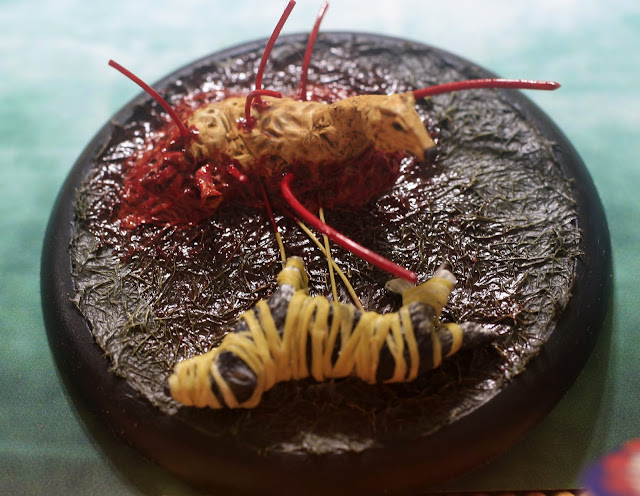 In case anyone is wondering, the title for this post comes from Clark in The Thing: "I don't know what the hell's in there, but it's weird and pissed off, whatever it is".

This wasn't my original plan for Forgotten Heroes, a challenge held by Jez over at Carrion Crow's Buffet. My original idea was awesome but I quickly discovered it would have meant spending over $50 on eight minis only to have to cut half of them up to convert the others. I might still have a go at it but I'll wait it out for now.

This meant I had to come up with something else, preferably something that wouldn't involve having to order stuff online and waste a week waiting for it to turn up. While scrabbling around in my storage boxes I came across this: 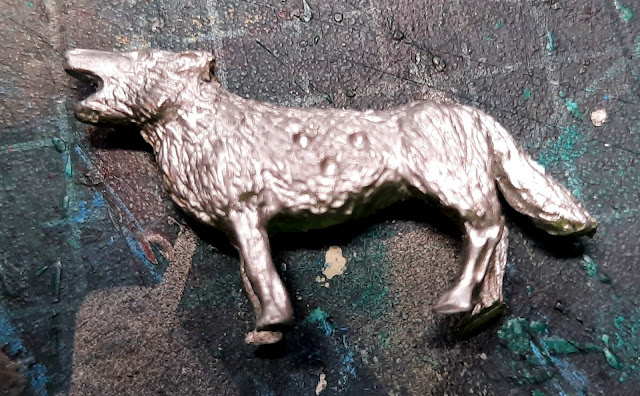 Why do I have a husky/wolf mini with holes drilled in its sides? More to the point, why do I have a husky/wolf mini in the first place? I cast my mind back across the months and then I remembered the Antarctic explorers I bought back in summer 2018. When I ordered them I chucked some huskies in my basket and never actually painted them. But why the holes? I obviously wanted to convert it or something, and holes mean that the dog would have something coming out of it... Oh, now I remember. I was going to make tentacles out of greenstuff, add them to the husky, and make it look like it's from The Thing.

But why stop there? The dog kennel scene is one of the most shocking and terrifying scenes I've ever watched, especially as I was all of 12 when I first saw it; my cousin had The Thing on pirate video, I watched it on a sunny afternoon in Norf Lahndahn (for the non-Brits, this is how the natives pronounce "North London") and had nightmares afterwards. In case you haven't seen it, here is is in all its remastered high-def gory glory:

So I decided to have a go at making the dog-thing. Out of greenstuff. And may the Dark Gods have mercy on my soul.

Me from the next day: I realised it might be a good idea to show which bits I wanted to make, so: 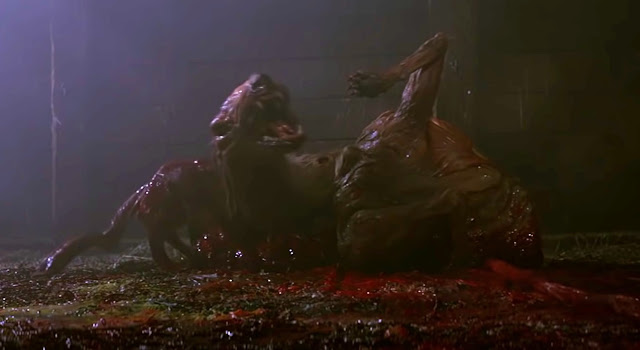 One will be the dog-thing...

...the other will be the poor doggo that's encased in tentacles.

Before we kick off, many thanks to Dave from Wargamesculptors Blog, who a few days ago got an email from Vermont at 8.30pm UK time asking for help and replied within five minutes. He's a gem, and this hobby community is awesome. 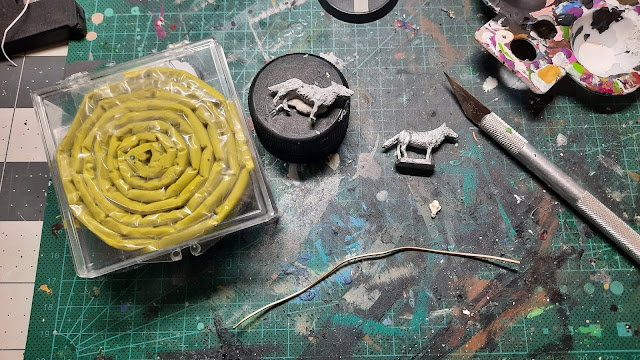 Here's the basic ingredients: greenstuff, a couple of huskies, some brass wire and a knife. Combine into a mess, place in a pressure cooker for two weeks, and retreat to a safe distance. 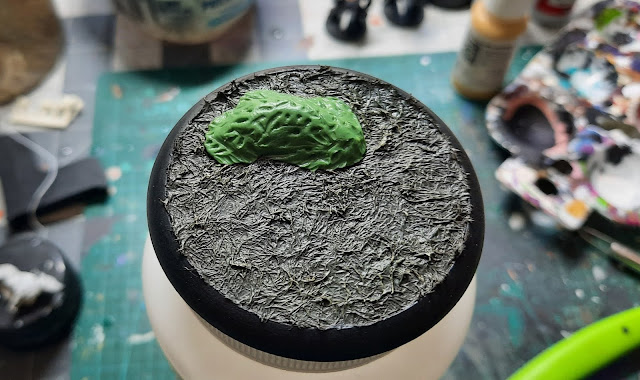 After rolling a ball of greenstuff I started to make the thing's body. As you can see I'm making it in situ on the base. It's a 45mm Reaper one, covered with Vallejo mud paste that's got bits in it to simulate grass. I thought it would be perfect for the straw-covered floor of the kennel, and after painting it with Black Green, Olive Green and drybrushing it with Yellow Ochre, it looks good. The greenstuff was squished into shape, wetted and wiped to remove my fingerprints, and textured with a toothpick. I tried to get the shape as correct as possible using photos from this excellent article by the company that made the original, but then again it's me doing the sculpting.

Excuse me while I geek out a bit: Rob Bottin, who was all of 22 when he was put in charge of makeup and special effects for The Thing, was so swamped with work that he lived in his workshop at Universal Studios for a year. Realising he was running out of time, he reached out to Stan Winston for help. Winston designed the dog-thing as a hand puppet and his company built it. Not wanting to take away from Bottin's achievements, Winston asked that he not be credited for the effect. Because of the pressure of getting everything done, Bottin suffered a nervous breakdown at the end of filming and was taken to hospital. He and Winston appear in The Thing: Terror Takes Shape, a making-of documentary that's superb and can be watched here. 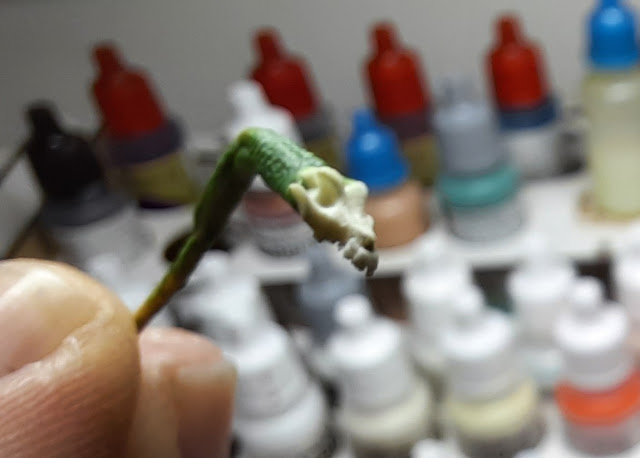 I had a few ideas of how to do the thing's head and neck, and this is one that didn't work. It's a resin dog skull from RBJ games but only after gluing it to some brass rod and building up the neck did I realise it's missing its lower jaw. Into the bin it went. 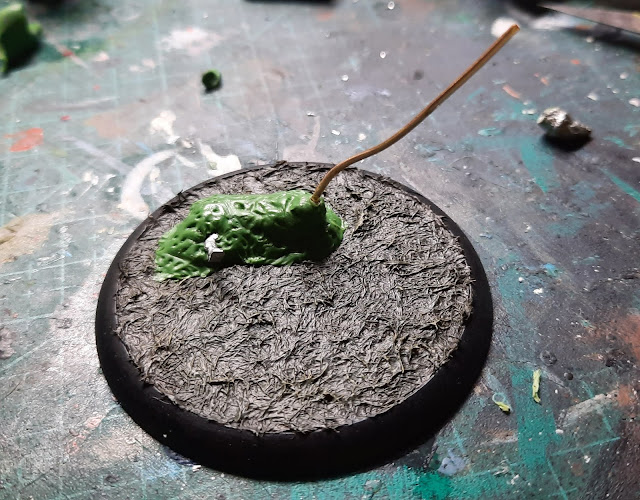 Once the body had dried I drilled a hole in it and inserted some brass rod to support the neck. 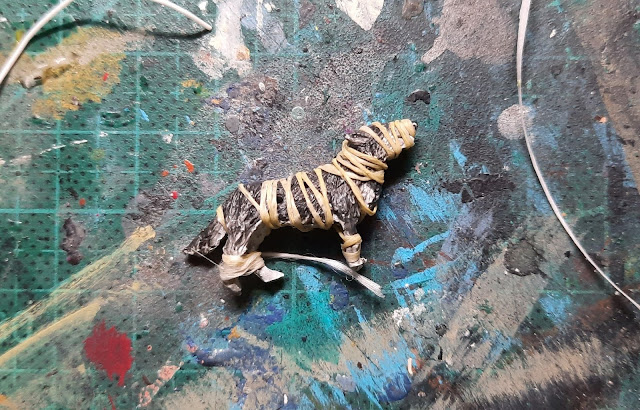 In between doing the greenstuff I got on with sorting out the poor doggo that the thing encases in tentacles. Using my pliers I closed his mouth and bent his legs closer together, then primed him white and painted him with Ghost Grey and some thinned Black Grey and Black. After a coat of varnish I got some dental floss, painted it Dead Flesh and wrapped it around him. As you can see I needed more, which is why, as I write this, there's a two-foot length of zombie-coloured floss hanging off a hook on the back of our bathroom door. And that explains Alicia's cry of "WHAT THE HELL IS THIS" at 5.30 yesterday morning. Note to self: Remember to cover that hole. 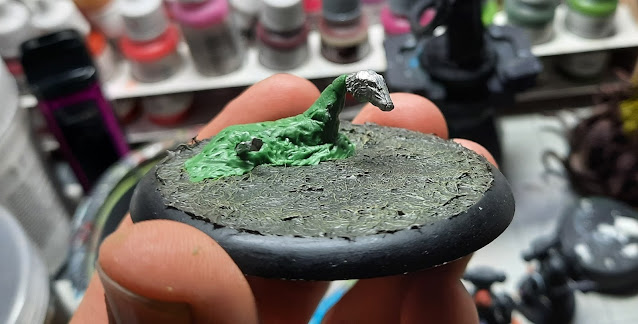 Back to the thing. With the brass rod safe and secure, I used more greenstuff to build up the neck. I cut the head off the second husky mini, carved off its ears (WHY DID I DO THAT) and drilled a hole in the back. With the aid of superglue, patience and a lot a swearing, I got the head to stay on and left it to dry. The thing you can just about see sticking out of its side to the left is a metal leg, also from the second husky. 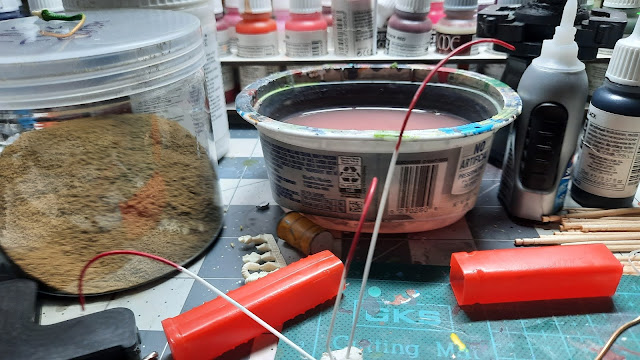 Tentacles. My email to Dave was to ask his advice on the best way to leave greenstuff tentacles to dry; hang them up or lay them flat? Dave suggested hanging them up, so I made one and hung it off my table lamp. Then I had an idea: why not use thin plastic rod? I have a ton of it, it's the right diameter, and, like cigarettes, it's got to be easier than rolling my own. But how to bend it? I thought about hot water, I thought about using a lighter, but then I just drew it between my thumb and finger several times and voila! Curved tentacles. After painting them Red, I just gave them a quick coat of varnish and stuck them in some blue tack to dry.

I forgot got so involved in making this thing (no pun intended) that I didn't take any more pics. The next day I made some ears out of small triangles of greenstuff and added them to its head. I drilled holes in the body to add more tentacles out of thinner plastic rod, and then it was time for painting. 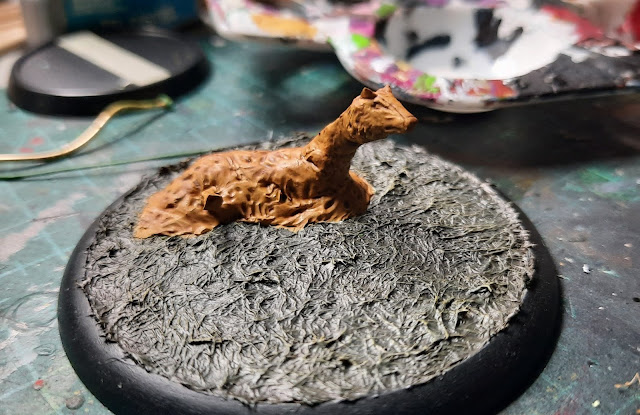 The actual model is an odd yellowish colour (WHY YELLOW) so I after priming it white, I painted the dog-thing with Vallejo Dark Flesh. It was given a wash with Sepia Wash and then highlighted with Yellow Ochre. After all the effort and swearing involved in making it, the painting was a bit of an anticlimax. Once it was dry I glued the tentacles into their holes.

In a continuing theme of my 49 years on this planet, I realised too late that I'd buggered up; this head should have open jaws. Yes, I used the wrong one. Keith, if you're reading this, the level and fluency of swearing I achieved over the next few minutes surpassed even that time my airbrush broke.

Oh well, on we go. I needed some gore, so out came the good ol' reliable Blood For The Blood God. The lower areas of the creature and the tentacles were painted with it, and then I thinned it down and daubed it around the dog-thing to get some gore onto the flooring. I also used it to make a trail from the thing to the bound husky.

With all that done I wrapped the other dog in the extra floss that had dried overnight and glued it in place. I cut four more shorter lengths to act as the tentacles coming from the thing to the husky. One is currently living it up on the floor of the spare room, which is why there's only three on the model. I used more Blood For The Blood God as glue to attach them to the creature, then glued the husky in place, stuck the overlapping floss to it, and it was finished. 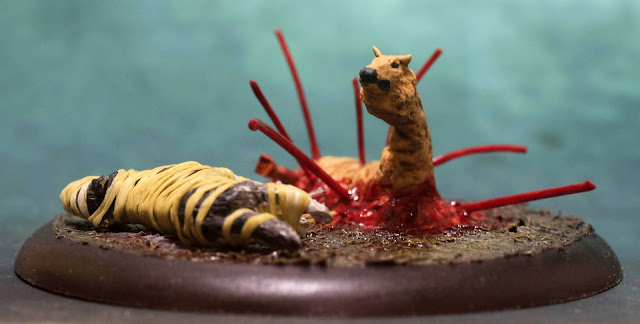 Post-mortem time. I'm very happy with it given my skills with greenstuff are usually nonexistent. The head really needs an open jaw, and the neck is a bit on the giraffe side. And the photos are terrible; I need to redo them with better light. On the other hand, I made it and feel pretty proud of it.

A quick word on the real dog: The infected Norwegian husky was played by a wolfdog named Jed. The Thing was his first role, and many of the cast remarked on how he would simply walk through the set on cue completely ignoring the actors, crew and filming gear all over the place. He was also capable of an eerie stare, as seen above as he watches the helicopter carrying MacReady and Dr Copper lift off. Jed went on to appear in a few other movies, and died in 1995.

So that's one of my three Forgotten Heroes projects done. The bits for one of them still hasn't turned up so tomorrow I'm going to hit the other one and as I quit my job today (long story) I'll actually have some time to do it. And in four days the Season of Scenery kicks off! I wonder if a certain cottage will make an appearance?