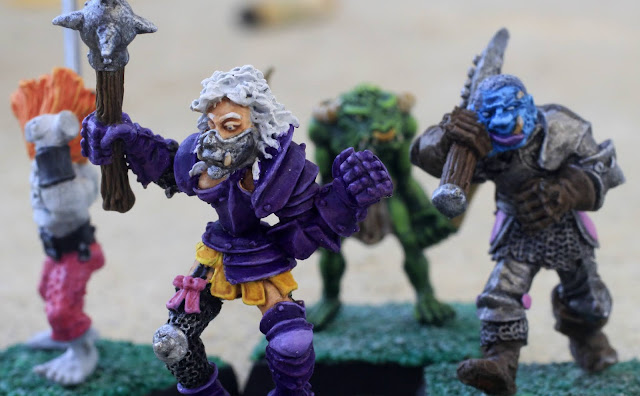 Back when I started this Slaanesh warband project I ordered all the figures off one Ebay seller, and she was kind enough to chuck in a few free ones, including two Chaos thugs. They were the first warband minis I painted and I really enjoyed them. I didn't think I'd get any more thugs until I was stupid enough to go on Ebay last month. 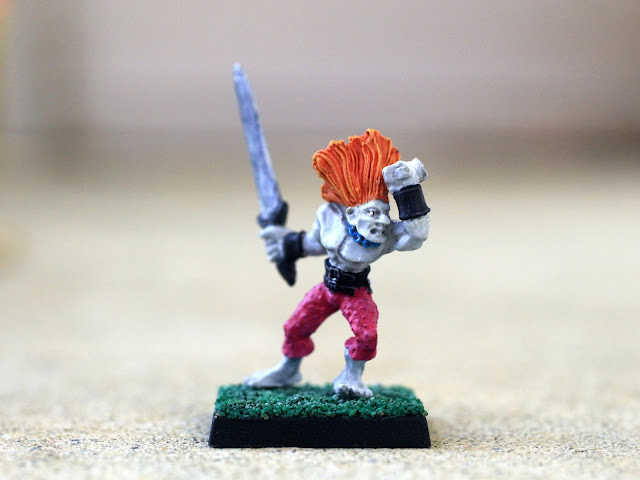 Rizhy was the first to arrive in the mail and has the honour of being the first figure I fully painted in Vermont. As Jilas and Houmon have darker, more barbarian-hued skin I decided to go the opposite direction with Rizhy and paint him with very light skin.
I kicked off by doing his spiked trousers in Vallejo Sunset Red, a strong pink/magenta. I added some Pink to highlight, and then some White to the Pink. I couldn't find my Army Painter Red Tone (I'm sure it's in one of the boxes, I just gave up looking) so the Sunset Red will have to work for the shading.
With his kecks safely out of the way I started on his hair. I wanted another bright colour so plumped for Bright Orange over a base of Heavy Orange. Some Sunset Yellow added to the orange worked for the highlights. 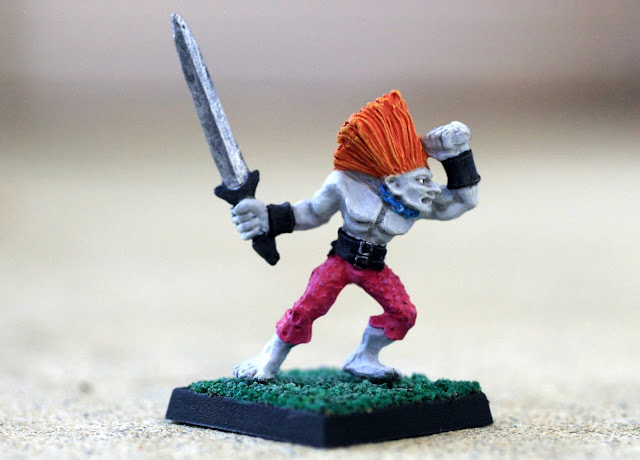 Now it was time for his skin, using Ghost Grey. I used Grey Wash to shade it and a mix of Ghost Grey and Ivory for the highlights. Rizhy's sword is Silver with a Dark Grey hilt. The chain around his neck gave me goosebumps when painting it, but luckily I held the brush steady enough to get away with it. It's Deep Sky Blue.
It took me a minute to work out why he's posed the way he is. I did wonder if he was checking his BO before going into battle, but then I realised he's supposed to have a shield, which wasn't included with him. I do have some Chaos shields but they're for my beastmen, so Rizhy will have to go shieldless for the foreseeable future. 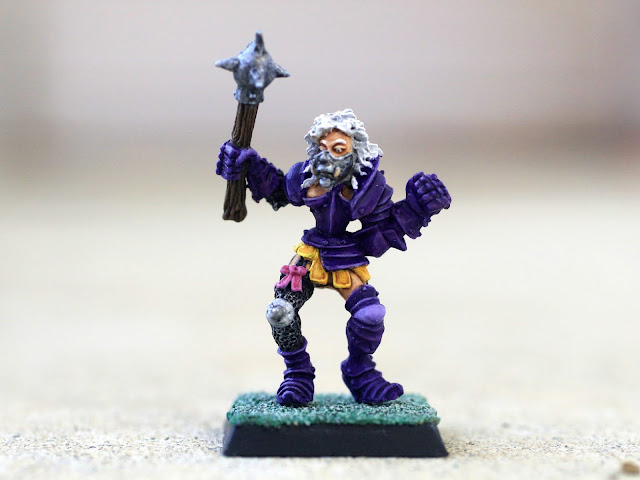 Citadel were always know for being a sausage-fest in terms of their minis, so finding this one was a bit of a shock as I had no idea that GW made female Chaos thugs. I cannot find a pic of her online (not even on Stuff of Legends or the Collecting Citadel Minis wiki). I asked Dave from Wargamesculptors if he could find anything, but he also drew a blank. Citadel made loads of different Chaos thugs/marauders/warriors and some had short production times, so I guess she could be one of those.
I didn't want to do the obvious (and fairly sexist) pink armour for Rheliamma so I went with Vallejo Violet with Purple and Blue Violet for highlights. Her chainmail is the usual Black drybrushed with Army Painter Plate Metal. As you can see, I gave in and used pink for the bows on her armoured stocking. 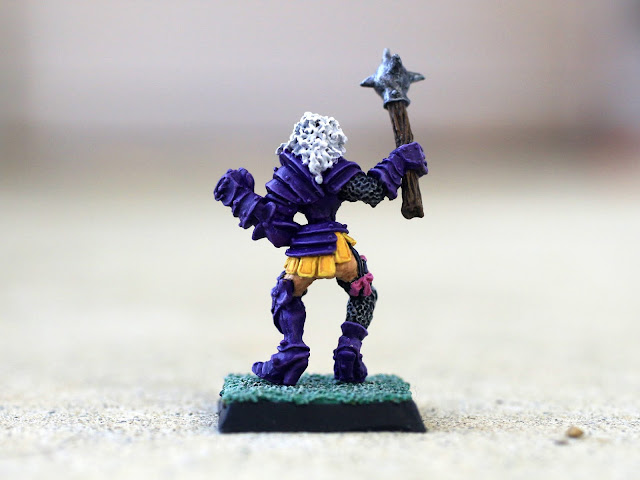 Again I wanted a different flesh tone, so I decided she'd look good with regular skin using Basic Flesh Tone. This was fun do do on her legs and chest where I tried desperately to keep the lighter colour off her purple armour, failed in some spots, and had to do a lot of touching up. Some Flesh Wash to shade and Corax White with White highlights for her hair and she was done. Her high-heeled boots remind me of Blanche, and I wonder if she's based on the classic Chaos Amazon mini. 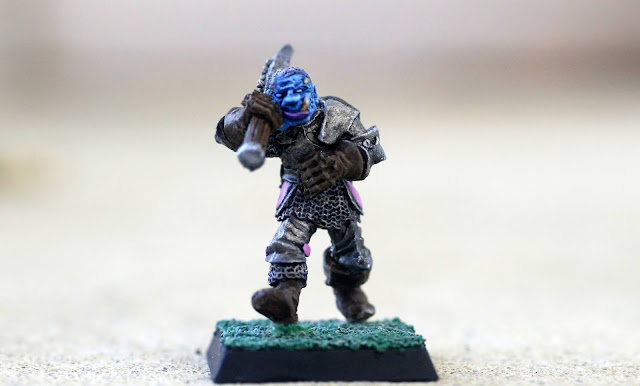 Although I enjoy painting bright colours on these minis I decided on a more basic plate-metal look for Obed with a touch of pink to show his allegiance.
He was the easiest thug to paint: Sombre Grey for the base with a coat of Army Painter Plate Metal on top, followed by shading with Black Wash. I highlighted him with Silver. His boots and gloves are Chocolate Brown and Flat Earth. 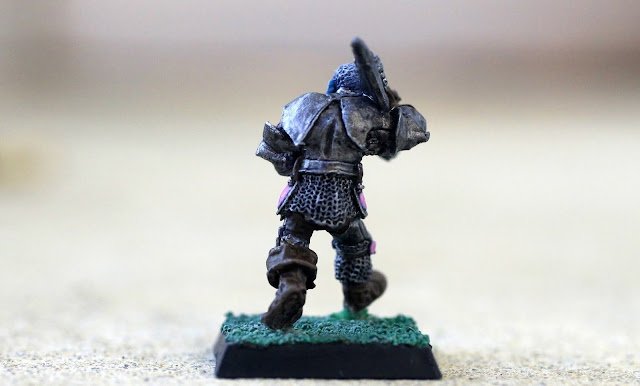 He doesn't exactly look 100% human so I thought he'd look good with blue skin. After a base of Electric Blue and a wash with Blue Tone, he was drybrushed with Deep Sky Blue and Sky Blue. His teeth are Citadel Wraithbone with Ivory. 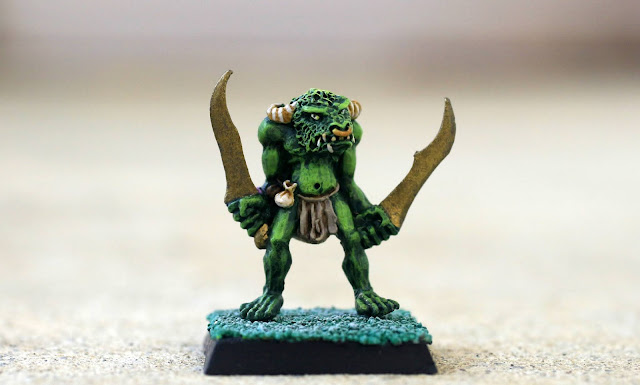 When I saw this one on Ebay I knew he was a beastman, but as I already have six (enough for a Slaanesh unit) I decided he'd work as a thug. According to his slotta tab he's called Beefman, but I renamed him Bugrit in homage to Terry Pratchett's Discworld.
I wanted Bugrit to look like a kind of out-there trollish figure, so it was Heavy Black Green for his base with added Scorpy Green and Yellow Green for the highlights and a wash of yellow ink. 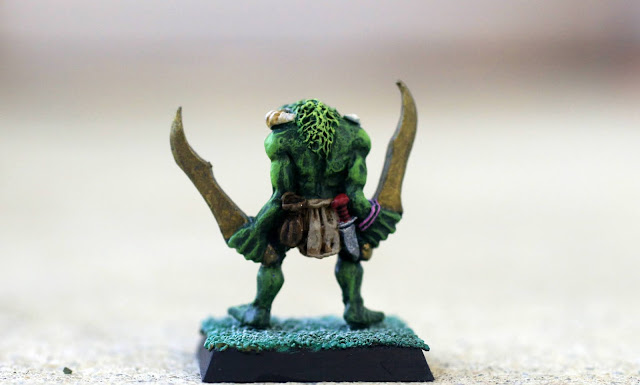 Once his body was done it was time for detailing. His loincloth is Forest Skin highlighted with Pale Flesh and his swords are Bronze, with Wraithbone for his teeth and horns and Brass for the nose ring. One of the pouches on his belt is Ivory and the other Chocolate Brown.
Bugrit is my least favourite of the unit because his skin looks like the sort of drybrushing I was doing in 1990, and because he's a bit too Nurgle. I wish I'd done him in an orange tone but of course that didn't occur to me till he was 95% finished. If I still don't like him in another couple of months he's going to get a Simple Green bath and a repaint. 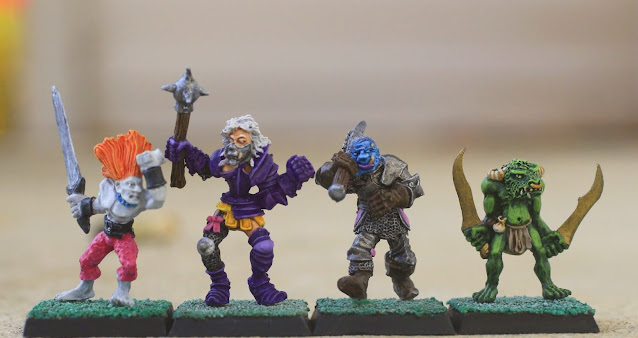 Here's a lineup; the other two thugs are packed away for now. Their bases were made with the same recipe as all my other Slaanesh figures: glue sand to base, paint with Park Green Flat, shade with Yellow and Strong tones, highlight with Ivory and Bone. Except for Bugrit, all the names are from here.
Labels: chaos, citadel, games workshop, oldhammer, slaanesh, vallejo, warband