A Vamp for Vampifan 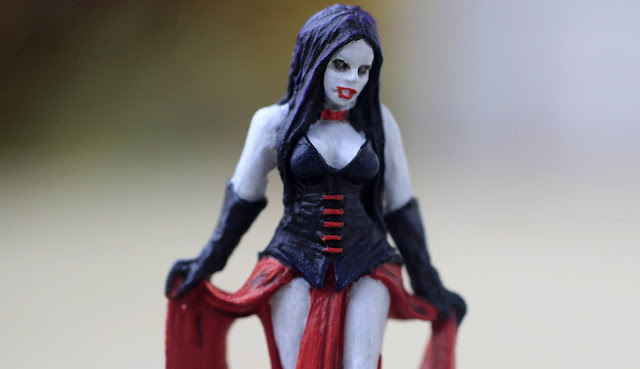 It's always a shock to hear of someone who's blog you've been reading on and off has died, and reading the final post of Vampifan — aka Bryan Scott — is an awful experience. Bryan was a horror fan, a prolific blogger for 11 years and loved miniatures, both painting them and playing games with them.
Bryan was also a big fan of Zomtober, an annual challenge to paint zombie figures (and which I wanted to enter this month but totally forgot about it — duh) and would give opinions and encouragement to everyone who took part. Roger over at Rantings from Under The Wargames Table has thought of a good tribute to him: paint a vampire, zombie or zombie hunter/survivor in tribute to Bryan. As Vampifan was a huge fan of Vampirella, and I've never painted a vampire (well technically I have), I decided to ignore the unpainted zombies in my possession and get a female vampire. I looked for one with lots of flesh on show, and Reaper did not disappoint. 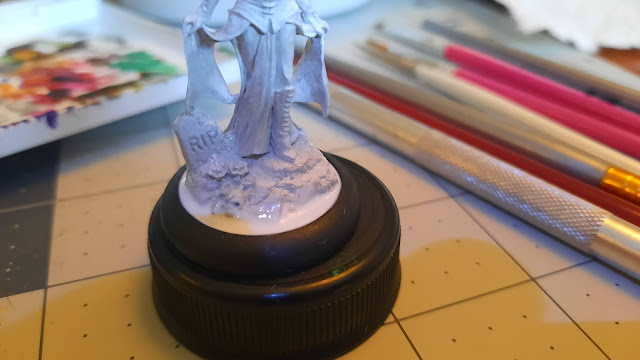 She only took a few days to show up in the mail, and after cleaning off the flash and priming her came the fun and games of basing her. She's on an integral base (AAARRRGGHH) so I superglued her to a 25mm plastic base and filled the gaps with tacky glue, sprinkled with some sand. I left it overnight to dry. 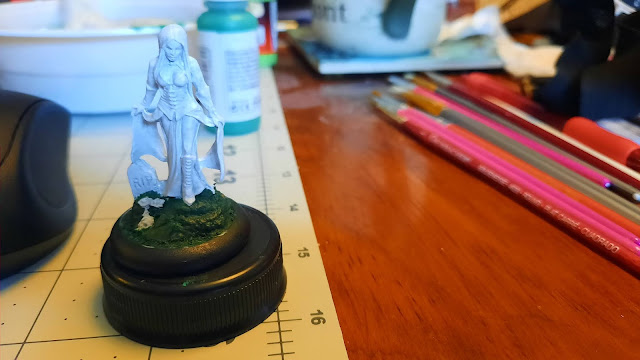 The following morning I sat down to make a start on her. I painted her base Heavy Black Green to get it out of the way and define where she stopped and the ground began; obviously I'll do more to it when the vampire is finished. For the figure itself, red is the obvious choice, but as I'm not a huge fan of painting red — although it worked well on my cultists — I decided on black for her bodice, boots and gloves, and red for her dress and laces. Her skin tone will be a unhealthy pale white/grey and, with stunning originality, I chose black for her hair as it's more Vampirella-esque (and because it's easier to paint). 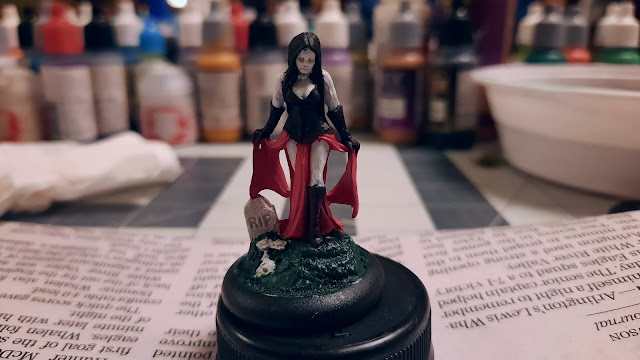 Here she is mid-paint in a terribly-lit snapshot. I did the black parts first, which were quick and easy. I meant to mix Dark Prussian Blue in with the black to add some depth, like I did with Devil Girl, but totally forgot as I'm an idiot. I tried to compensate by washing the black with Blue Tone and using increasing amounts of Dark Prussian Blue mixed with Black for the highlights.
With the black done, it was time to paint the red. I hunted about for my Citadel Mephiston Red but couldn't find it in my storage box, so I used Vallejo Red. It's a solid colour that covers really well and I had her robes painted in no time. You can spot all the places I'll have to touch up with white or primer before painting her skin.
Red has never been one of my favourite colours to highlight. Adding white just makes pink, which looks odd, and doing it the Games Workshop way means adding orange to get that late-80s Blood Angel look. I decided to just use lighter/brighter shades of red, starting with Carmine, then Flat Red and then Vermillion. Shading was also an issue; green wash is the best to use but I had visions of it going horribly wrong, so I decided to use it sparingly and let the Red be the shading for most of the red bits. 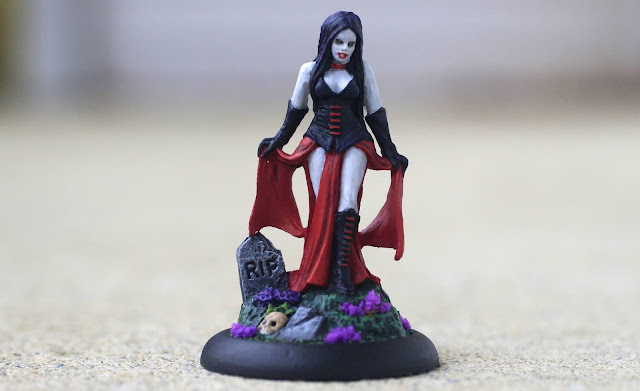 Er... I forgot to photograph a few steps, so here's some better photos taken outside with my DSLR and macro lens.
Her clothing is done YAY so now comes the hair and skin. I didn't want her hair to have a blue sheen like her clothing, so I used Royal Purple to give it some body. I've recently painted a mini with pale skin, so I used the same paints: Ghost Grey, Grey Wash and more Ghost Grey mixed with white for the highlights. It actually wasn't as hard as I thought it would be, although I had fun trying to keep the grey off the red and black. Her eyes were a bit of a problem, so I gave up trying to paint pupils and just washed around them with Black Wash to give her that Goth/raccoon look. Her lips also took three attempts. 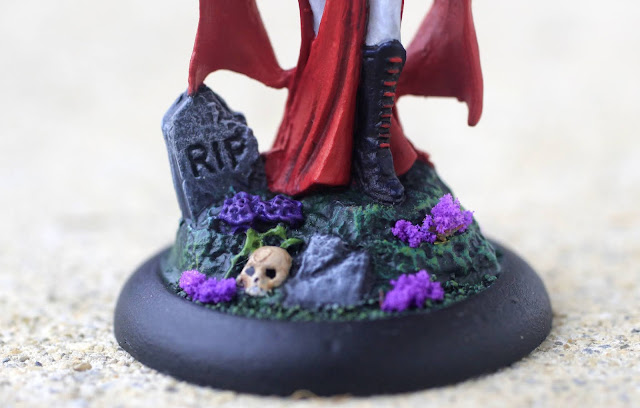 The final step was finishing her base. It got another coat of Heavy Black Green to cover the dots of red and black and then the base was washed with Green Tone and a bit of Purple Tone. I drybrushed it with some Park Green Flat and Olive Green to lighten it, then did the gravestones in Black and Stone Grey. The skull is Wraithbone and Flesh Wash, and the flowers are Violet with Purple highlights. To add some more elements I took some of the flowers I used on Tinley's base, cut the actual flower/flock off, and glued it on. 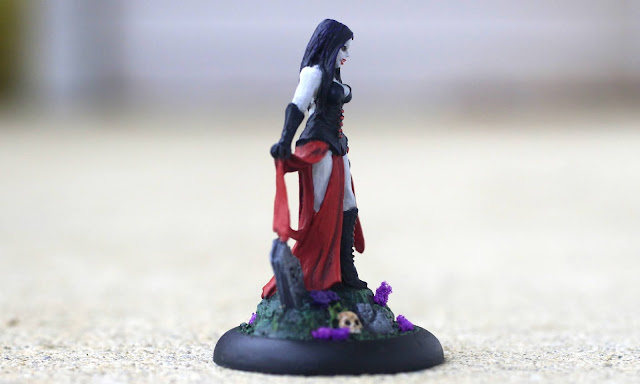 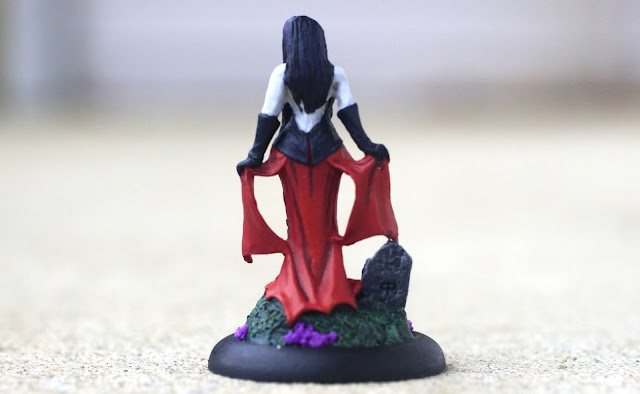 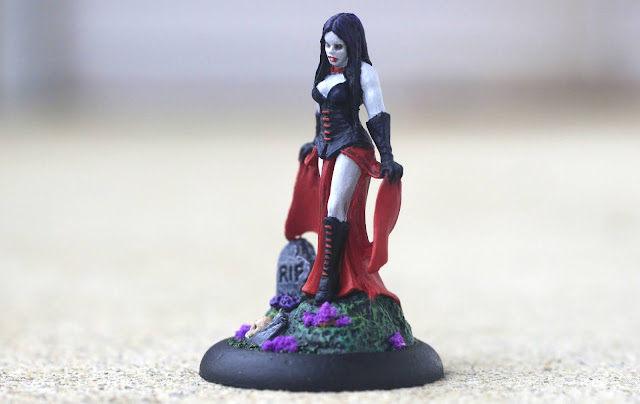 Although there are bits that could have been better, I'm really happy with how she turned out.
Labels: basing, female, horror, reaper, vampire