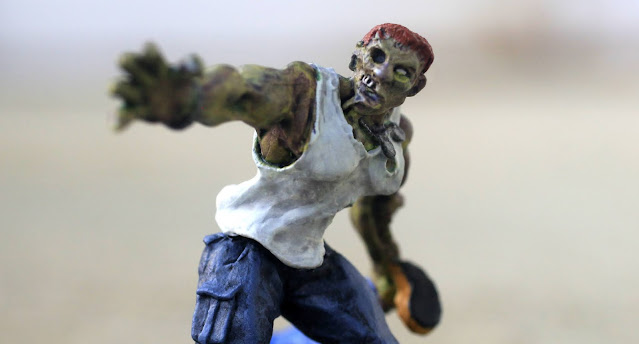 "Zombies (2)". That's Reaper's imaginative name for the pack of two minis I got at Brookhurst Hobbies back in August. As you might have guessed, there are two zombies in this pack, but I just painted one as the other has a ton of flash on it and I just couldn't be bothered.

The mini I painted looks like he was in the military (the dog tags kind of give it away) before becoming a mindless killing machine, so I'll call him Sarge. He's wonderfully posed in the middle of swinging half a corpse at whoever's in his way. 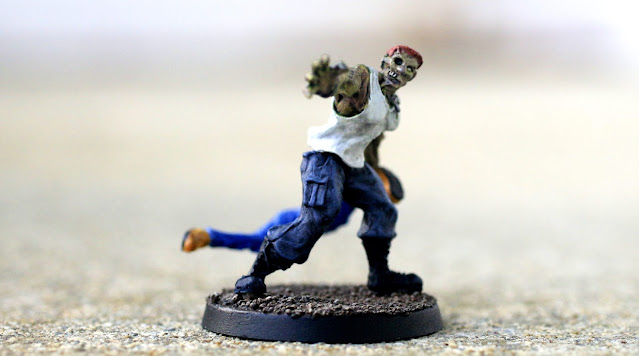 After gluing his top half to his legs, it was the usual thinking-too-much-about-the-paintjob moment. I briefly considered giving him camo or at least olive drab trousers, but as I couldn't find my pot of Olive Grey I just went with Sombre Grey and a liberal dose of Black Wash. Drybrushing and layering more Sombre Grey worked for the highlights, and once dry I painted his skin with the usual recipe of Dead Flesh plastered with Green and Purple Tone wash. A dab of Ivory for his single remaining eye and some Wraithbone for his teeth finished off his good looks.

To brighten him up a bit I used Corax White (which is actually a very light grey) for his vest. After shading with Grey Wash I used more Corax White and some White to highlight it. Finally, Sarge's dog tags and watch were given a touch of Plate Metal and some Black Wash. 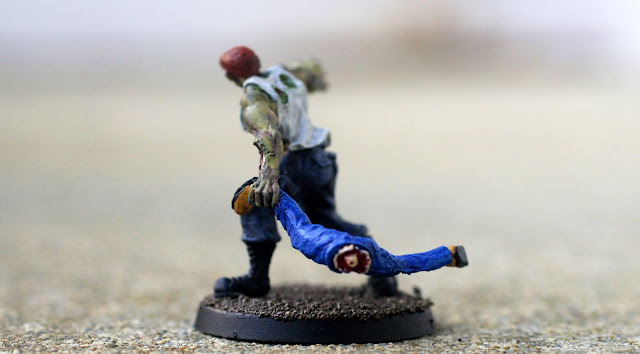 Sarge's victim/weapon was the easiest bit to paint. I wanted a bit of a colour contrast with Sarge's duller shades so I went with brighter colours. Flat Blue highlighted with Electric Blue worked for the jeans, and his shoes are Filthy Brown with some Yellow Ochre. His insides are Red with some Purple Tone and Flat Red, and the shreds of skin are Pale Flesh. What's left of his spine is painted with Wraithbone. 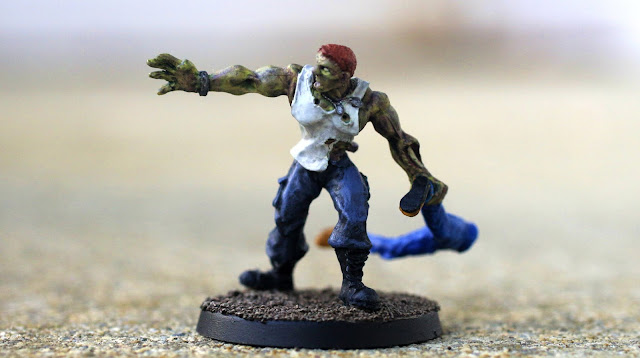 Sarge wouldn't fit well on a 25mm base, so I used a Games Workshop 30mm one. After the usual glue-and-sand treatment it was painted Chocolate Brown and highlighted with Burnt Umber and a bit of Ivory.