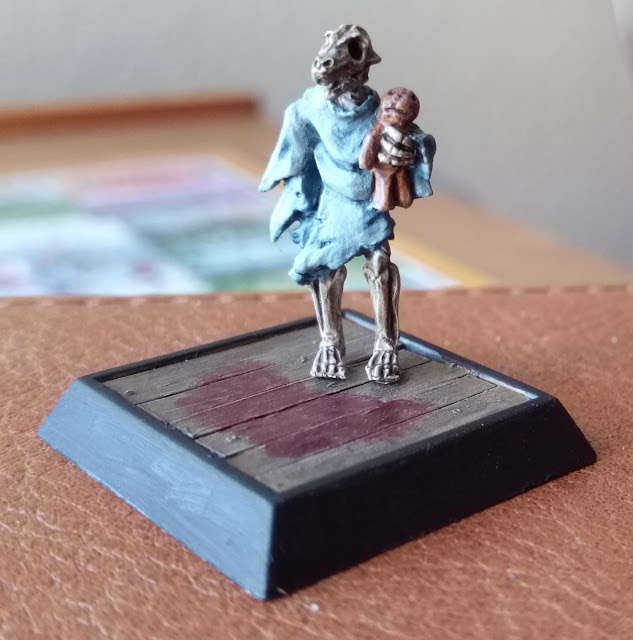 According to the Google: "This undead thing resembles a child's skeleton with the paws and grinning skull of a fox. It is gray and covered with cobwebs, and dust falls endlessly from its mouth. It holds a ragged stuffed child's toy, its eyes pierced by pins, in its skeletal, fox-like hands. The creature is dressed in a small sleeping gown that looks like it was partially burned in a fire, as if it were the remains of a child who had died in bed."

I didn't know that when I picked this up at my friendly local game store. It was the smallest mini I'd ever painted at that point. To give you an idea of how small it is, the base it's on is 10mm wide, which is 0.4" to the metrically-challenged. It was the first figure I tried to highlight with layering rather than drybrushing, and it went pretty well considering at that point I wasn't too sure what layering was. 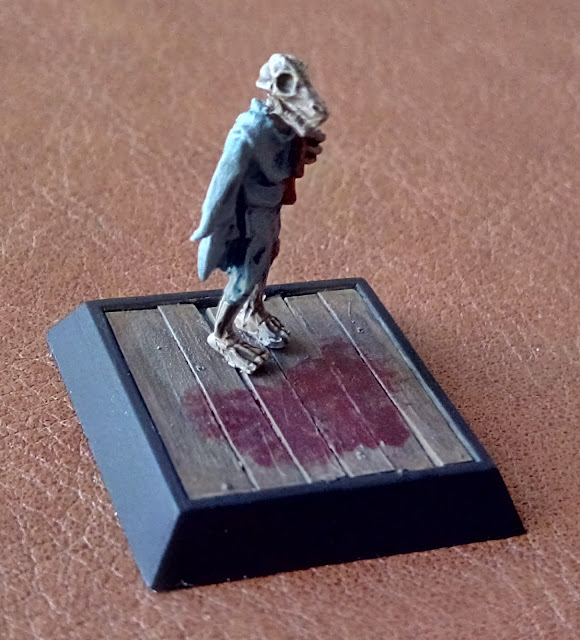 I basically ripped off the colour scheme of the example on the Reaper site. The floorboards are strips of plastic card. She (for some reason I keep thinking of the mini as a she) was a bit lost even on such a tiny base so I added the dried bloodstain. I'm not sure if it's worked but I couldn't think of anything else to put there. Sculptor Kevin Williams did a great job on this mini.

Alicia: "You've finished another one? Let me have a look GET THAT THING AWAY FROM ME IT'S HORRIBLE!" 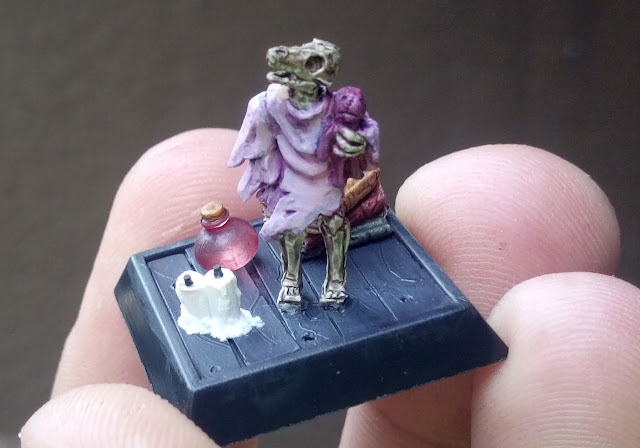 You get two in a pack, so the next night I painted the second one. This time I used my new pot of Vallejo Pink and again tried some layering, which seems to have worked better. More sliced-up plastic card provided the floorboards, in black this time.

I tried painting a circled pentagram on the floorboards and putting her inside it, but as I can't even freehand a short straight line that idea went out the window and left me having to repaint the base. 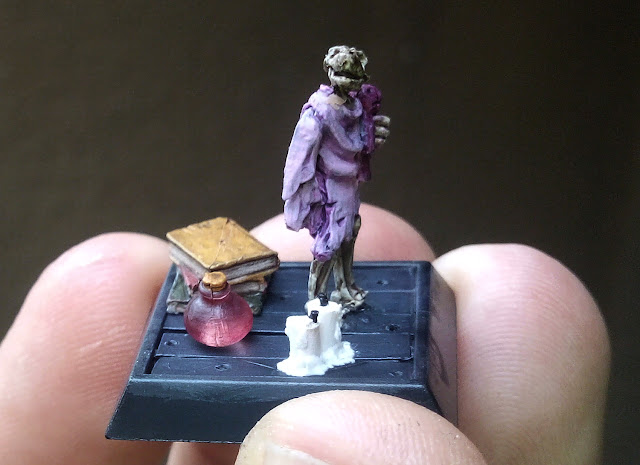 Then I remembered that I'd bought a set of accessories called Wizard's Study, or something like that (the packaging is long gone; I cannot remember the manufacturer but this company's minis are grey pre-primed plastic.) So I dug them out of my bits box, picked a small pile of books and a clear bottle, painted the books and glazed the bottle and glued them in place, then attached the Whisperer.

I thought the base needed another element so I cut some 2mm plastic rod into short lengths, drilled them out, inserted small pieces of brass wire for the wick and painted them to look like candles. I added the drips and the pool of wax using Liquitex modelling paste. I am absurdly pleased about how they came out.